Please Release Me, Let Me Go. 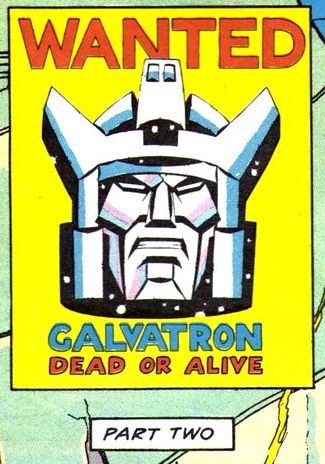 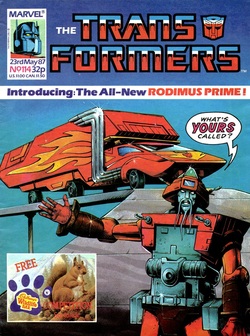 
Full report and pictures in our ten o'clock bulletin!


If we were lacking in Transformers last week, the second part of this story more than makes up for it as we open with a 100% increase in non flashback Cybertronians as Rodimus Prime, Kup, Blurr and Wreck-Gar are seemingly doomed on Cybertron as they come under attack from 8 airborne Decepticon hunters.

What this does have in common with the first half though is it's more about establishing a new character than moving on the plot, in this case Rodimus Prime. The fact Hasbro UK were keen on a big push for Rodimus is apparent from the two covers to this story, which have basically nothing to do with the contents but which do show off each of his modes- with this week's effort ably showing why Prime's Flaming Winnebago mode will barely appear in the comic as it's as exciting an image as a picture of a wall with wet paint on it.

Furman however, is clearly keen to do more than just show off how awesome Rodimus is, and as such the first half of the issue is given over to establish the new Autobot leader as a much darker, tormented soul than Optimus ever was (well, at least at this stage, a lot of this actually foreshadows the road Furman will take the original Prime in later years).

So it turns out the Decepticons have actually been led into a trap, with a group of Autobots (including Bumblebee, good to see he's going to have a long and happy life leading into the 21st century) laying in wait to spring an ambush, resulting in all but the leader of the Decepticons being taken down. 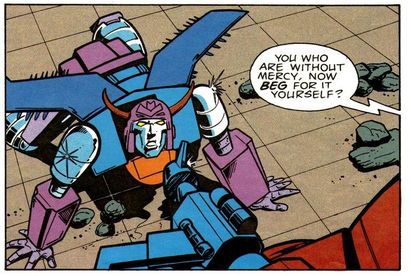 "Ha, wait till Hot Rod jumps in mate!"
This then leads into the best remembered moment of this issue, and arguably of everything Rodimus ever did in the comic. At this stage we're more than used to writers shamelessly rehashing moments from the animated film without rhyme nor reason, but back in 1987 this was amongst the first (following a couple of dialogue lifts in Target: 2006), so it's easy to forget now how shocking it must have been for readers at the time to see the "You who are without mercy..." exchange being repeated between Rodimus and the Decepticon, only for it to end with Rodimus mercilessly shooting the hunter in the face with a curt "Request denied".

From Prime's point of view it's easy to see why he did this, he was there when Optimus had the same choice and knows you have to act quickly lest something goes very badly wrong. However, it's hard not to read this now and picture Bay Optimus doing exactly the same thing to all his defeated foes. Yet this scene with Rodimus is often held up as brilliant, whilst movie Prime's actions are usually vilified by fans for being un-heroic and borderline evil (and by human military standards killing an unarmed and defeated enemy soldier is indeed a war crime) even though they have the same rationalisation of a gonzo powerful Decepticon being too dangerous to risk taking into custody.

Now I like Movie Prime, but I think the clear difference between him and Rodimus that perhaps explains why the later is more appealing to fans is that Winnebago Prime almost immediately shows contrition, it’s not a cool moment followed by a mighty Peter Cullen speech, it’s the actions of a leader caught up in a war he can’t win and forced to take desperate measures, with it taking Kup to persuade him what was done was necessary.

Of course, this is basically that Douglas Adams joke- Rodimus doesn’t gratuitously kill people and then brag about it in seedy space bars, he gratuitously kills people and then agonises about it afterwards for hours to his girlfriend. Is it actually better or worse than film Prime that he actually knows what he’s doing is wrong but still does it anyway? Either way, this added inner turmoil instantly sets him apart from his predecessor.

This brings us to another thing about Rodimus that many fans often mention- He’s been leader of a war that has gone on for millennia for less than a year at this point, isn’t it a bit too soon for the burden of leadership to be weighing that heavily upon him? It took Optimus four million years to get to the point of blowing himself up over a video game, what possible right does Rodimus have to be crying when the war on Cybertron in 2007 is going better for the Autobots than we’ve ever seen? Yes, he’s squandered the almost certain victory the end of the film gave him, but the current stalemate/cold war between his forces and Shockwave’s Decepticons is a far better deal than the days of Straxus chucking everyone in the smelting pool.

In mitigation, I do think what often gets forgotten is that Rodimus isn’t really a newly created Autobot, he’s been alive for millions of years and it’s entirely possible the stresses of being Hot Rod caught up in endless deadly war are still with him.

Of course, every single other Autobot has exactly the same problems so the big manly tears he’s weeping and the general shortness he’s showing with his troops doesn’t really have that much of an excuse. 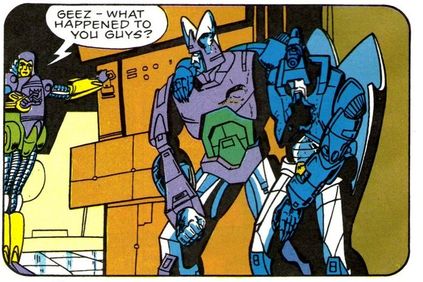 My Autobot Counterpart is nearby... real nearby.
With this firm establishing of Rodimus’ character out of the way, it’s back to the plot. In an interesting and rare sign of the more covert side of the war effort, deep cover agent Nautilus (and that answers my question from last week about whether we’re too early for Sixshot, if the later 1987 toys had been known to Furman this would have been Counter Punch) has come back from his mission sooner than planned because a chat with Cyclonus and Scourge has revealed not only where Galvatron is but that a Freelance Peacekeeping Agent has gone back in time after him. Cue more angst from Rodimus over his bounty having set disaster in history in motion.

What’s interesting is that for all these years I’d assumed the Autobots and Decepticons were using the same time machine on the planet, but Nautilus reveals they in fact “possess” a similar one. Now that’s an interesting choice of words, we’ll see soon the design is indeed exactly the same and the technology is compatible with the trigger mechanism Galvatron is using- Where exactly did these devices come from?

Back in 1987, Bumblebee is all worried because First Aid has just vanished in a puff of mass displacement whilst the two of them were out for a nice walk on a sunny day (unlike Skids, First Aid won’t get a massive 100 issue story out of this), when Death’s Head hears the little Autobot say he’s going to report this, he shoots him in the face and watches him explode... 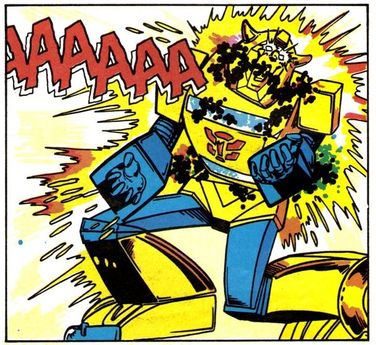 Nightmare fuel.
Well, two obvious things to start with: First is that this is by far and away the biggest bastard thing Death’s Head ever did during his “Classic” Marvel era. Compared to the lovable rouge he’ll quickly be reformatted into being so he could sustain his own book, killing someone with no financial gain seems hugely out of character. Perhaps discovering First Aid is his exact equal in mass has really hacked him off?

The second is that Bumblebee’s death here is of course in preparation for the coming of Goldbug, and that in large part this storyline is mainly about dealing with the fact the UK will not be reprinting the four issue G.I. Joe crossover (well, at least not till the book gets into desperate measures in a few years time) that gives him his American death, officially because Action Force is currently too far behind for it to make much sense for British readers, but more likely because it’s a comic so bad that it can give a kitten cancer at 50 paces. This is of course the biggest point of divergence between the British and American stories seen yet, though by no means will it be the last.

The one thing I don’t see ever really get talked about though is how Bumblebee is alive, well and decidedly not Goldbug in 2007 at the start of the issue. Now, with the ongoing “How can Optimus die in 1987 and be in the film?” issue perhaps Furman simply though there was no reason not to include Bumblebee as anything could happen in the next twenty years, and he does indeed have a decent role in the movie anyway (and in retrospect we know Bumblebee will be back long before the turn of the century).

However, future issues in this story will spell it out even more- what is happening in 1987 is not something that happened in the past of the same characters in 2007. The past is being changed but the future isn’t changing with it. This could be the “Going into the past moves you into an alternate timeline” idea touched upon in Target: 2006, but considering the Universe threatening time storm we’re now hurtling towards it’s fun to speculate that this discontinuity between Now and Then is going to rip reality asunder in the end.

So yes Rodimus, you should feel bad.

And just for fun, imagine that the G.I. Joe version of Bumblebee’s death is what happened in the original history.

Much like the first part, this is a fairly basic issue but the time and effort put into the character stuff makes it much more interesting, and is another fine example of making a lot out of a little. Yes, both halves could probably have been easily made one 11 page story, and Rodimus is a more annoying character to focus on than Death’s Head, but overall this opening act of the new epic has shown Furman at his very best.

Plus Wreck-Gar quotes Bob Monkhouse, which has to be worth something. Not to mention it being less embarrassing to read now than the pop culture reference he’ll be making in a few weeks.

Will Simpson, hurtling towards the end of his time on the book, does a solid job on art but Rodimus really needs the bulk that Geoff Senior gives him in order to not seem a weedy lightweight. Mind, Bumblebee’s death is horrific so points to the man there. 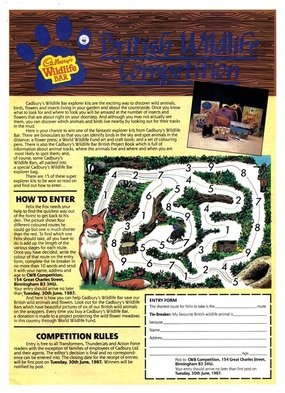 Like me, he's foxy.
The comic is so excited about the Cadbury’s Wildlife Bar competition it even gets plonked on the cover in a way that should ruin it but somehow makes a rather dull piece much more fun. It does seem slightly over the top for the chance to win some felt tips though.

If you happen to have your own time machine, why not pop back to May 23rd 1987 and go to Nostalgia and Comics in Birmingham to meet the creative teams of Thundercats and Action Force, including Furman and Senior. The ordering of the titles in the news piece on Transformation (alongside the fact the piece is called Birmingham-Ho!) shows which of the two books Marvel thought was more important.

Grimlock gets a letter from an Australian girl (Helen Falt of Townsville- now there’s a generic name), how long do you think it takes for him to call her Sheila? Meanwhile Matthew Perry (apparently living in Camberley at the time) takes a break from drinking coffee and banging Courtney Cox in order to be the first person to ask how Megatron can be dead but yet still become Galvatron. Grimlock is a real Friend and gives Matthew a variation on the same answer he offered when the question was asked about Optimus, but whilst hinting the Space Bridge could have just chucked Megatron out somewhere else...

Inhumanoids sees Earth Corps fight a group of giant bats. This isn’t as interesting as it sounds.

Next week Ultra Magnus is back, is he looking so shocked and upset because he’s seen Dan Reed’s art? 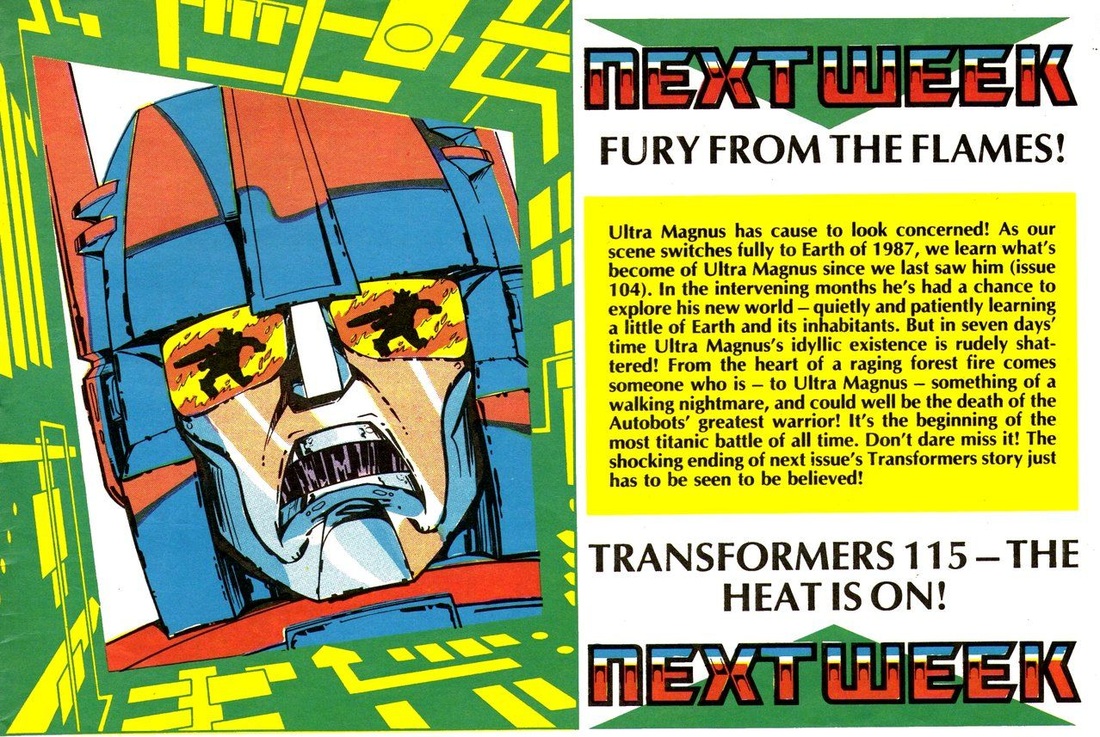