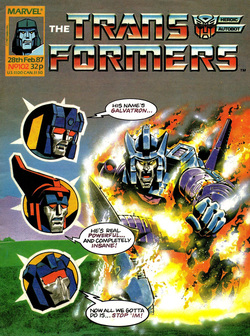 "Your troops have fallen, Prime- but then what other possible out-come could there have been? All who challenge Galvatron will perish!"

As suggested last week, Fallen Angel is basically a big fight and, with the set up now out of the way, this second half is the one that really delivers on the all out action side of things.

This is a problem as last week also saw us be spoiled by Geoff Senior's presence on art, Jeff Anderson's work here is technically fine and most of the individual panels look perfectly good, but the sheer dynamism and energy just isn't at the same level as Senior's. Whilst this is being harsh on Anderson (and this series has, overall, increased my appreciation of his work) it has to be said his action panels frequently look more like characters posing at one another than actually going at it.

What doesn’t help is it really is just a punch up. One of the things I’ve admired about the bulk of the fights thus far is there being a general sense of purpose and tactics to them; here though with two sets of characters who only run into each other by chance and one of them being nuttier than Nuttela there’s no real sense of a goal beyond basic survival.

This sounds a bit mean, but there are still basically three really impressive moments in this issue. The most minor is the bit quoted above, where Galvatron’s increasing persecution complex about Rodimus sees him mistake Swoop for Prime. As no first name is given the shocked reaction from Swoop is hilarious in retrospect as we’ll be finding out later this year the extent to which being compared to Optimus is about the biggest insult you can give Swoop ever. 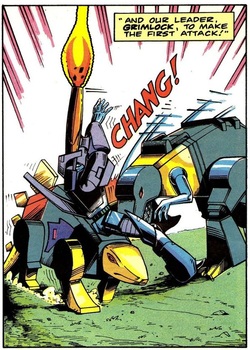 Good... but not Senior good.
The second is Shockwave’s reaction to all this. Coming to the fight expecting Megatron (again, keeping the ongoing plots alive), his reaction to the sight of Galvatron-whom he knows of from Shockwave’s log- amusingly one of the black and white stories will take this throwaway notion of him recording everything and run with it for a great Blue Peter gag-is fascinating. Knowing the future Decepticon tried to usurp Megatron he decides the same fate must be awaiting him, so he chooses to join the battle on the Dinobots side to prevent this happening.

This not only manages to send Galvatron packing in a way that doesn’t undermine his power (as he doesn’t want to fight his own future troops), it sets up Shockwave’s fragile state of mind for the rest of this arc perfectly. For all his logical exterior Shockwave is going to be deeply insecure about his position as leader, an insecurity that will find personification in Galvatron and will lead to him making mistakes and eventual madness. This will be some of the very best material Shockwave will ever receive and the increasingly desperate cat and mouse game between him and Galvatron is going to be a very rewarding one to read.

The third is Professor Morris. As I talked about at the end of In the National Interest, this poor old man is going to be the first victim of Furman’s main weakness as a writer: the inability to follow through on long running storylines to a decent conclusion. And indeed, the fact Centurion is supposed to be controlled by a human is going to be completely forgotten about after this, with no explanation of what happened to neither Morris nor his crusade against III. 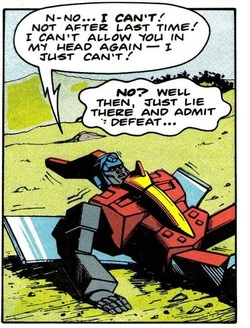 "Don't forget me will you?"
However, he does at least get one last great moment as, after Swoop is knocked out of the battle and bemoans how they did this for Centurion but no one will ever know, Morris finally reveals himself to the Dinobot through the link they share.

It’s a very powerful scene, as Morris points out Swoop basically has robo-concussion but if the robot let him take control once more they could work as a team to fight off Galvatron. Swoop’s reaction is understandably one of out and out horror, even if it might save the day; dare he subjugate himself once more to the condition that he fears most once more?

It’s a fantastic piece of writing and what’s really nice is that when they do team up, the cliché is avoided and they don’t beat Galvatron, it’s only the aforementioned Shockwave arrival that sees the Decepticon, shouting “Next time Gadget, next time!”, driven off.

I guess we just have to assume that Swoop was still pissed off with Morris to the point of never telling anyone else about him. Speaking of unfulfilled story potential, the issue ends with Shockwave giving a doom laden proclamation that when Galvatron returns he’ll probably take revenge against the Dinobots first. Despite this, and the fact Grimlock is going to be Autobot leader for the bulk of this storyline, the closest the two will ever come to meeting again is sharing some panel time in Time Wars!, but with little proper interaction.

I’ve probably come across as unfairly harsh on this issue; it does have good, even great, moments and flows along at a fair old lick. And despite failing at the action stuff Anderson does do a great mad eyed Galvatron. However, it’s not quite the sum of its parts despite the return of the UK stories main villain it does get a bit lost amidst the story surrounding it. This is basically a case on setting up future plots rather than something that strives to be a great story in its own right.

This week Transformation is very excited about the new Thundercats comic, with good reason considering it will be one of Marvel UK’s more successful and long running attempts to ape the success of Transformers. Tellingly this editorial is more enthusiastic than any mention of Action Force has been so far. But then of course, Furman was the initial editor of that book and may well have taken over the reins of  Transformers by this point (it occurred somewhere in the early 100’s, though the strip itself is still working from under Rimmer’s guardianship) so there may well have been some bias there. 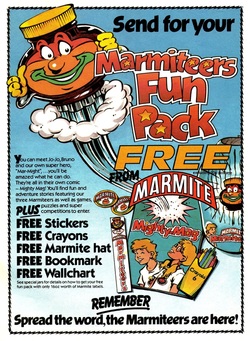 That jar is terrifying.
Speaking of Action Force, this week seems the end of the tease strip, which keeps up the Dr. Brainwave deception right till the bitter end. Still, now it heads off to its own comic, which will no doubt be so huge and successful we’ll never see it back in Transformers ever again.

I’ve mentioned before that one of the odd things about the lack of enthusiasm on Hasbro/Marvel’s part for really pushing a Transformers fan club is that everything in the 1980’s had one, and there is no better example of this than the advert this week for Marmite’s effort. Yes, you can send off to be a Marmiteer and get a Marmite themed magazine, Marmite themed stickers, Marmite themed crayons and Marmite themed hat.

Grimlock has the first of many valiant attempts by fans to spell “Bah-weep-Graaaaagnah wheep ni ni bong” via Christy McKnight from North Humberside (according to Grimlock, the only place in the Universe not to understand it).

David Moucka from Downpatrick asks a question about the Deluxe Insecticons that gets a very dismissive response from Grimlock, perhaps suggesting a reason why they won’t show up for so long and will almost instantly die when they do.

Next week shows Furman can follow up on promised plotlines when he tries, as we get the long awaited Ultra Magnus and Optimus Prime team up. Will Octane be able to handle it? 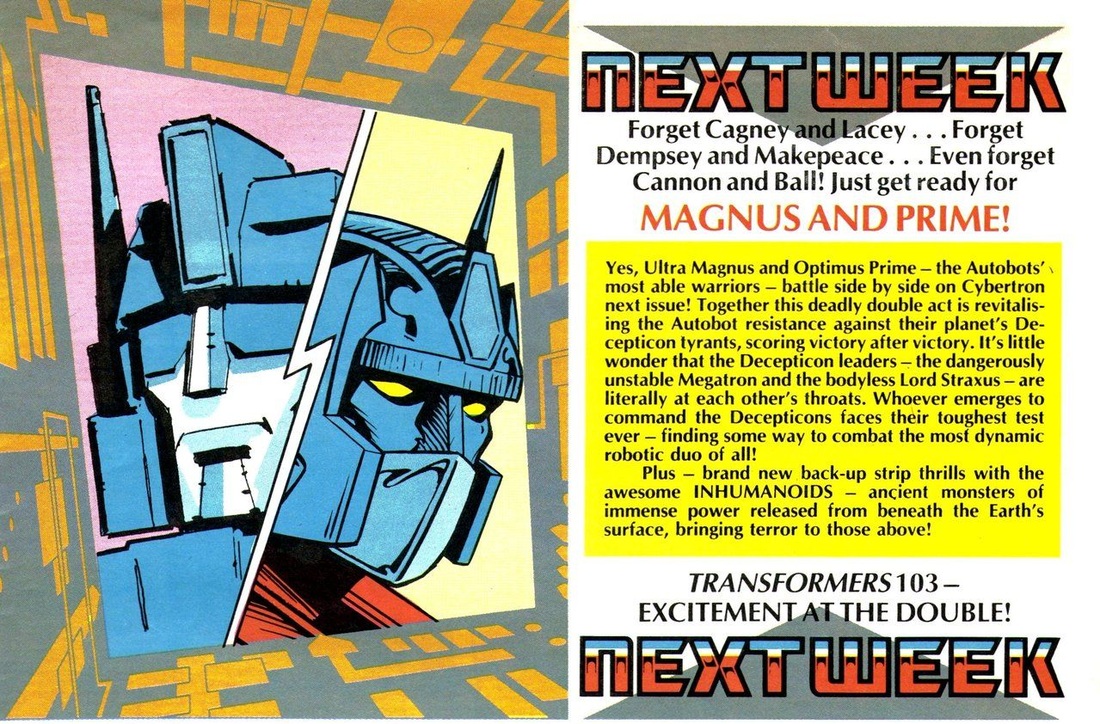