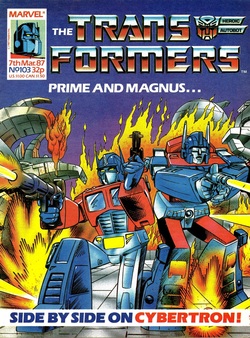 "I will have to destroy you!"

After our three issue diversion (and again, doing this Jack Bauer style in real time has given me an appreciation of how long that month must have felt to the average 8 year old that I didn't quite have before) this week sees us return to the political intrigue on Cybertron, and presents us with a first for the comic: a time when the Autobots firmly have the upper hand on their home world.

But despite what the cover promises, the highlight of this issue is all about Octane. The "narration at odds with what we're actually seeing" gag is an old one (though obviously one beyond Mike Costa as he twice did narrated flashback issues with no attempt to make them work on anything other than surface level), but the opening scene of Octane reporting to Straxus with a highly exaggerated account of his bravery during an Autobot raid plays it brilliantly to the hilt and is absolutely hilarious.

The gag is helped by some fantastically expressive art from Will Simpson, when Octane's narration talks about how he didn't panic at all when Prime appeared; Simpson's art perfectly captures the Decepticon's "Oh shit" expression in the flashback panel. Though the true purpose of the scene is to show the renewed rigour of the Autobot resistance now Optimus is back it is still a fantastic mini-showcase for a character who isn't going to get a whole lot to do beyond be a background extra (though pleasingly Octane's other showcase in the black and white era will be nice and faithful to his cowardly lying git portrayal here).

It's also the most James Roberts-ey a Marvel issue has been thus far, even beyond a similar gag being used in Last Stand of the Wreckers or the one panel cameo by Tailgate.  The deftness of touch and use of humour to set up some quite serious plot threads would feel right at home in the 21st century comics and shows that, when he's on song, Furman's increasing confidence has added a whole extra level of maturity to the comic.

Another sign of an increasingly assured writer is how the scene transitions are handled, with the exception of the first cut between Autobot and Decepticon headquarters they all flow smoothly into one another, framed so that characters on Earth finish the sentences of those on Cybertron or ironically contradict the previous panel. It's a small touch, but must still have taken some effort to make work and makes for a more interesting read than just straightforward cutting back and forth would.

Even the title of the story works on multiple levers, referring to Straxus’ plan, the renaissance of the resistance and the return to “life” of Prime and Megatron next week. 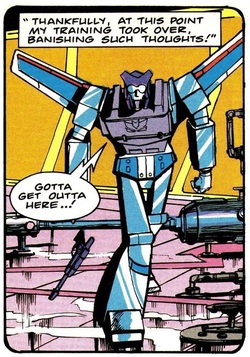 "They call me Tankor now?!"
Following the Octane opening there are three strands to the issue. The most minor of these is a brief moment of touching base with Earth as we see Warpath's Wanderers arrive at the Ark. It's basically perfunctory, establishing the Autobots now know about Galvatron and reminding readers of the status quo on the blue green planet, but there's some nice banter between Ironhide and Perceptor that stops it being dry and dull.

On Cybertron, the second most important thread is the impact of the return of Optimus Prime on the Autobot resistance. Normally the utter dependency of the Autobots on Prime for leadership in various bits of fiction (especially the cartoon) can be quite annoying, but here it works because Optimus has been gone for such a long time. This is King Arthur come back to lead Britain in her darkest hour and in that context both the way he motivates the fight and how even the normally level headed Xaaron is begging him not to go back to Earth (despite stopping the Decepticons using the Earth's resources being a priority) works brilliantly.

There's also an interesting subtext going on with Ultra Magnus that will be more fully explored across the length of his story arc. He's keen to go to Earth with Prime despite the leader pointing out he's needed on Cybertron, and almost goes into a petulant sulk over the refusal. This is a character who feels he has something to prove post Volcano and that is going to feed into everything he does from here on in.

Prime's big speech is also, I believe, the first time a variation on "Till all are one" has appeared outside of the animated continuity (discounting the various film adaptations of course), the beginning of a very, very long trend. Though perhaps surprisingly considering the movie is going to have a huge influence on Furman's writing it's never really going to become a catchphrase for the comic, and indeed it's not even an exact quote here.

The meat of the issue though is Megatron and Straxus. Again, full credit to Will Simpson for making something as potentially static and dull as a gurning competition between a robot and a head in a jar visually exciting and memorable, each scene on the Decepticon headquarters is full of energy and the actual attempted takeover of Megatron's body by Straxus is genuinely terrifying, helped by some of the best colouring we've yet had from the new system. 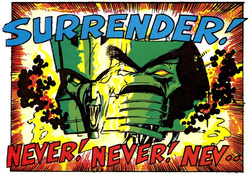 Bloody hell.
Yes, Straxus has had enough of both Megatron and being a head in a jar, and as such has decided to take up a new residency. For the idea to work you just have to assume the 'cons don't have the resources to simply build him an entirely new body he could stick his mind up (though unfortunately retcons will later reveal they can in fact build a body exactly as good as Megatron's, but that's a rant for about three years time), but the whole, almost Hammer Horror, angle is fascinating.

The final scene between Megatron and Starxus is extremely well written, each mocking the other, with Megatron not remotely taking seriously the threat a tinned head might pose to him. This is a mistake on his part, as we get the nightmarish mind duel between the two, culminating in them seeming to swap bodies, as "Lord Straxus" reaches into his old fish bowl and crushes "Megatron" to death...

Creating a cliff-hanger where the lead villain is in jeopardy is a tricky business, but this pulls it off and exactly what is going to happen now Straxus has his sea (and every other type) legs is a situation full of such tension it's going to be hard to wait a week to find out what is going to happen next. Coming after a slightly disappointing two parter- Fallen Angel is, pleasingly, one of the few stories I've covered thus far to have fallen in my esteem rather than going up or at least staying the same- this is a fantastic reminder of how good a writer Furman can be. 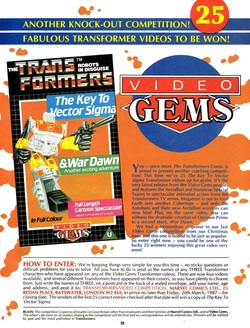 I suspect Silverbolt may be a correct answer.
There's no Grimlock this week, he's made way for another competition, this time for the Aerialbot themed Video Gems release containing The Key to Vector Sigma and War Dawn, the question is potentially quite tricky as you have to name three characters who have appeared in any of the company's Transformers VHS output, though the entry page helpfully suggests looking at the covers if you've not been able to watch one. Transformation has the results of the previous competition for the Movie soundtrack, and rather pleasingly tells the winners to "Get rocking" to it.

With the end of the Action Force tease means we of course return to the exciting adventures of Spitfire and...

No, instead we're kicking off into the brand new adventures of the Inhumanoids. Though I know it was a cartoon and a toyline I basically have no memories of this franchise and- other than a quick glance at the history of the comic (four issues adapting the opening of the cartoon ending on a cliff-hanger, it'll be interesting to see how that is handled if the reprints last that long) I've otherwise done no research at all on this. Not out of laziness for once, it's an experiment to see what it's like reading the back up without any real knowledge of what it's about, as would have been the case for kids at the time.

This first instalment doesn't tell you much about the Inhumanoids themselves, it seems they're being dug out of the ground trapped in crystal, but it does establish both the strange effects this is having on the environment and some of our human characters. The good one, and head of the Earth Corps, goes by the impressive name of Herc Armstrong. The baddy industrialist one has the less impressive name of Shore, but makes up for it with an eye patch. At this stage it's hard to say in which direction this will go, but with everything being treated Very Seriously, it actually doesn't feel that different from Spitfire.

Next week, a hugely important moment for the future of the comic as Ratbat takes charge. 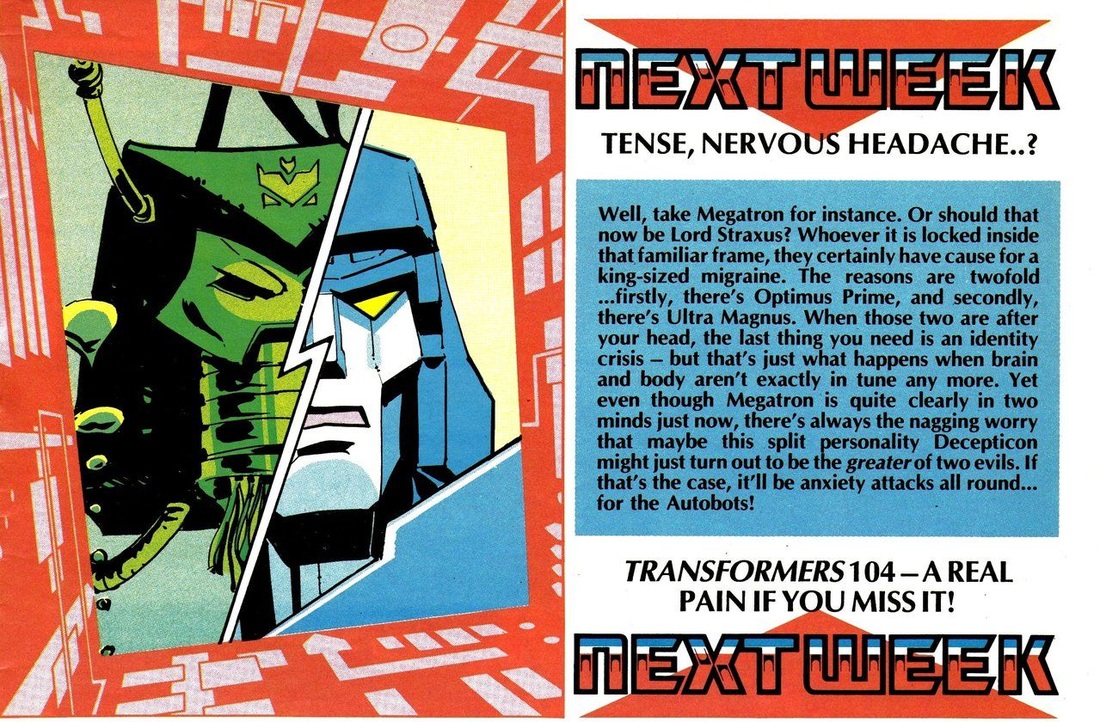