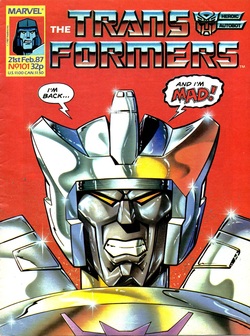 Th-this is not Rodimus Prime!

Back at the start of Target: 2006 I talked about how the comic was entering a transitional period between its second and third eras (though it didn't really click until I worked through it in real time actually how long a period it lasted), and this is the story where the formal passing of the torch occurs, as the pre-film focus characters and the villain who will dominate the next 100 issues meet and interact properly for pretty much the only time.

Yes, as promised by the cover (which in a bit of an important first sees Lee Sullivan drawing what will become his signature character for the first time), Galvatron is back. The opening page of the story magnificently relies on reader familiarity with the rules of time travel in the comic to create instant tension as, whilst Seaspray's Squadron walk to the Ark (the Arialbots seem to have buggered off), Skids vanishes in a flash of light, with the ominous narration "...it begins again!”

This shows the confidence the book currently has in marking out its own territory, even with knowing what was going to be happening in the American stories at least as far as Grimlock becoming leader (and probably a bit further as well by this point) and allowing for the possibility they simply dropped a note to Uncle Bob/the American editor asking if Skids was going to do anything in the foreseeable future it's still a fairly big step to completely remove a previously heavily featured character for an extended period of time.

Amazingly the book will pull it off, with Skids future couple of American appearances, even that from the Jose Delbo "chuck anyone in the background" period of art, will be nice and easy to edit around. It's also interesting to note this occurs the issue after exactly what happens in limbo was established, did Furman already have the idea of what he was going to do with Skids when he came back at this point?

Before we move onto the main event, it's worth noting that this is the first time we get to see Furman's take on Blaster and Perceptor, who are going to be pretty much written exactly as their TV personas rather than Bob's more restrained versions. This isn't so obvious with Blaster here (though in keeping with the cartoon take he's drawn with his TV character model), but Perceptor is the verbose head in the clouds genius seen the film rather than the hardened resistance leader. 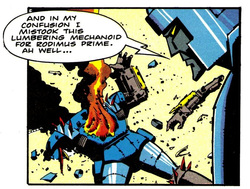 Confusion is putting it mildly...
But no one is reading this issue to see Perceptor use big words. The return of Galvatron is certainly given an impact, literally, as he crashes to Earth from space. It turns out that, once he was thrown out of Unicron by Rodimus Prime at the end of the film he used his time trigger to send himself back to the 1980's (it's odd it doesn't return him to the same moment he left- indeed this will be the only time in the Galvatron arc time travel doesn't happen between exactly 20 year intervals), but he arrived in Earth orbit travelling at the same velocity he left Unicron's leg...

This sets in store how Furman is going to experiment with writing Galvatron for his first couple of return appearances, as the completely loco season 3 cartoon version, complete with similar "hit on the head by a planet" explanation. It's possibly a coincidence (though the letters page confirms the UK team were at least aware of Five Faces of Darkness by this point), but the net result is the same. For now until roughly the time the volcano story ends, Galvatron is a dribbling at the mouth loon.

This is bad for Centurion, who just happened to be passing and is drawn by a strange feeling of fate to the crash site, who is ripped apart easily by bonkers Galvatron who mistakes him for Rodimus Prime. It's a fantastic fight scene that really conveys well the strength of Galvatron and the desperation of Centurion, only hampered by the colours being misprinted, resulting in everything being a lovely shade of lilac.

Destroying Centurion does calm Galvatron down a bit, and he goes into a magnificent sulk at his lot in life, complete with some gorgeous recreations of the end of the film (likely the first time a lot of the audience had seen it) from Geoff Senior. Galvatron effectively sets his stall here for what he intends to do for the next two years: to take control of this era's Decepticons and plot to give the future a good twatting when it arrives.

Before he can do that though, it's time for a massive fight, as by a massive coincidence Galvatron and Powerglide's Posse run into each other. Fallen Angel is basically a two week action scene, and what's joyful about it is that it's only at this exact moment-thanks to the combination of American plots and toy advertising needs- that you would ever get a panel of Galvatron fighting Seaspray. Or Beachcomber and Powerglide for that matter. It's brilliant to see these characters, in their last moment in the sun in the comic, get to take on the comic's big bad. 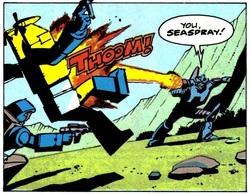 But it is a little about this.
But of course, the money shot isn't Seaspray Vs. Galvatron, it's the cliff-hanger where Centurion's good friends the Dinobots turn up (waving his head about), out to prove that payback is a bitch. Again, reading in real time has made it really strike home for me how long it has been since the Dinobots last appeared (basically five months), so it's easy to imagine how exciting it must have been for young readers to not only have them back but to have the tease of Grimlock and (now made madder by Blaster scrambling his mind) Galvatron one on one as well.

Amidst all this it’s easy to overlook the brief cameo of Shockwave and the Predacons, but it not only sets things up for the second half but keeps the ongoing plots alive with Shockwave’s fear that the nearby explosions might be a pissed off Megatron.

This first half isn't quite up to the same standards as Target: 2006, mainly being about moving the pieces into place for a punch up and mad Galvatron isn't quite as powerful a villain as the more contained version. But it looks glorious, has some neat dialogue and promises great things for next week.

As a sign of how much the times have changed, in Grimgrams Grimlock can't be completely sure that Transformers: The Movie will be coming out on video when Michael Lang from Scotland asks. He also acknowledges there's not likely to be a sequel but does promise a TV mini-series follow up (where Galvatron goes mad after crashing into a planet. Small world). Simon Cruise from Rickmansworth (what, the Scots only get narrowed down to the whole country?) shows the grip Transformers had on pop culture at the time by asking about a transforming cola can you can send off for with purchases of Cherry Coke, which, as an unlicensed product Grimlock is very dismissive of, calling it a Decepti-can.

A to Z covers Blaster and Blast-Off, and features the white square around the text that actually makes it readable for the first time, and Robo-Capers has the gag about a robot umbrella outshone by the world's cutest fourth wall breaking dog.

Well, at least they tried.
One interesting thing about Action Force I failed to notice last week which long term reader Tim Roll Pickering spotted is that it was the first time the second part of a split American issue (be it Transformers or a back-up) had benefitted from a title and credits. The later seems to have been a one-off for the moment, but the title remains and helps the whole thing feel like its own entity rather than a quarter of another story cut into bits.

What’s also interesting is we’re now into the half of the original issue where the mistake with Doctor Mindbender’s name was corrected. Or at least it was in the American printing, as a sign of how Action Force isn’t going to get the same care and attention as Transformers someone in editorial has clearly spotted the mistake, but didn’t bother; and possibly didn’t even have the reference material to do so; to check which was the wrong name and thus have “Corrected” Mindbender to Brainwave here. In a different font to the rest of the speech bubble so it really stands out as well (the changes of G.I. Joe to Action force were done much more smoothly in the first two parts, though the bolded “Them” is a change from “Joes” as well).

Oh well, you can’t win them all.

Next week, what’s that, coming over the hill? Is it a Dinobot? Yes it is. 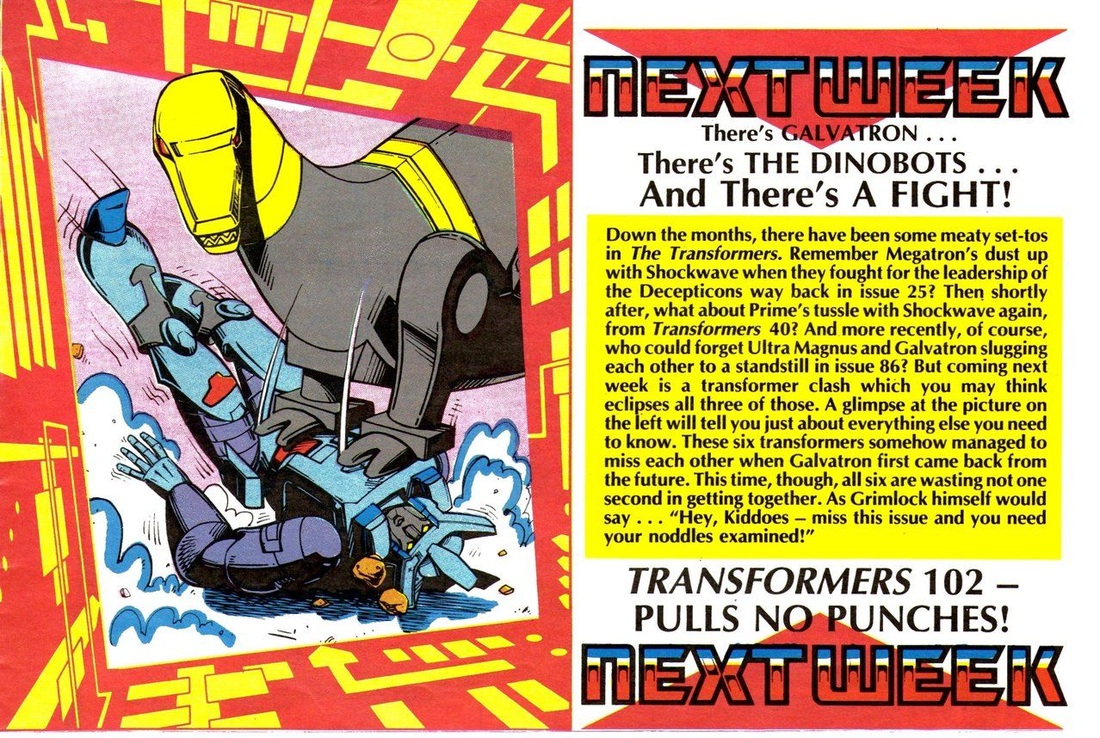