Faces From My Past Return, Another Lesson Yet to Learn. 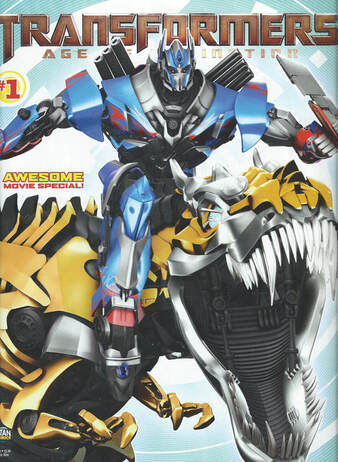 
Ha! That’ll be the day! Drift’s a Decepticon for life!


For the fourth film, Titan actually came out swinging in an attempt to relaunch the book. Most notably, for the first time, they reached out to Transformers websites to offer press releases and a review PDF in order to generate more interest in the older readers who had drifted away over the last four years.

TFArchive was one such site, and I got to be the lucky bugger with the advance copy. Which became my last review on the Archive as I never got round to the remaining issues. You can tell how successful having my patronage is from the fact there are only four issues left to go.

Other promotion included having free toys across what would ultimately be the entire run (more on that later) and free packs of TOPPS cards. With a fold out poster for them included in this first issue. As I no longer have either the poster nor the cards, I’ve no idea how they worked. Nor why you’d want them on a poster.

All this may have been for nothing though as the problem of the last two movie relaunches returns: prequels. 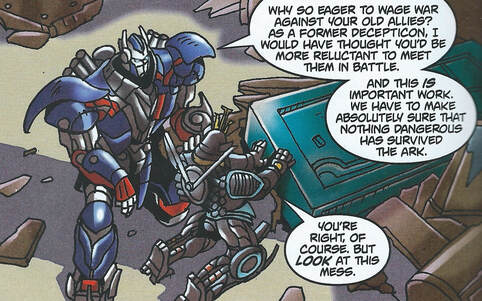 Too soon Prime.
Adrift in Time and Space opens in a similar way to the Mike Costa IDW ongoing, a page showing the rebuilding operation in Chicago following the events of Dark of the Moon. How far along the repairs are is actually deceptive, the framing device for the flashback (yes, we have a prequel to the prequel within this story) is firmly called “The present day”. And Age of Extinction is set five years after the previous movie rather than three. So this is probably meant to be 2014, two years before the newest big screen blockbuster.

But it still starts the story off firmly out of date. And it’s already got an odd relationship to the films as we cut to the moon and the Ark, where Optimus Prime is in the new body he only gets a minimum of two years after this.

He and new best pal Drift are helping to clear out the Ark (it does seem unlikely they’d wait three years for this. But then, Last Knight will show it virtually untouched after an even longer gap), with Optimus finding an awkward way to work into conversation that Drift used to be a Decepticon.

Now, there’s no hint of this at all in either of the films he is in. So someone (and I’m not sure if this is on the back of the toybox or something the returning Robin Etherington added himself) has clearly just slapped the IDW character onto Drift because they didn’t know what the film version was actually going to be like at that point.

Guess Drift likes to stand next to green guys.
You think it’d be fairly easy to guess how Michael Bay would treat a guy in a big samurai hat, but instead here Etherington just writes him in a fairly generic “Serious” way. Which he only becomes more so when he digs up the body of his old Decepticon friend Knucklehead. Who should have been part of the Earth invasion force, but someone had killed him before even leaving the Moon.

And Drift knows who as we cut back to five years earlier (where mentions of Megatron being active and people on Cybertron, ala the early Revenge of the Fallen issues, would actually just about fit with a 2009 date, working with “Now” for the frame) to when he was an out and proud Decepticon.

Now, having made a thing of Drift being a former Decepticon, you’d expect this to be the story of what made him chose to defect. So it’s something of a surprise it isn’t. Which makes me wonder if Etherington had nothing but the toy bios to work with and thought there would actually be a “Why I changed sides” moment in the film itself.

Instead, on a planet that is implied to be Cybertron, the very much alive Knucklehead is chuckling away at their orders to take a heavily defended Autobot fort. That’s like something the paranoid crazy Breakdown would do!

Nice to have one Transformer correctly characterised.

Though as he’s not here, it’s down to Knucklehead; Lockdown and their appointed by Megatron team leader Drift. Who has a plan to take the fort with no fatalities. Because as we know from Dark of the Moon, the Decepticons are actually more reluctant to kill their foes than the Autobots are. Including Drift when he actually switches sides.

Lockdown doesn’t need a Dylan to tell him to maybe kill his prisoners though, and after a couple of Autobots surrender to him, he’s all ready to execute till Drift intervenes.

Is this what motivates him to switch sides? 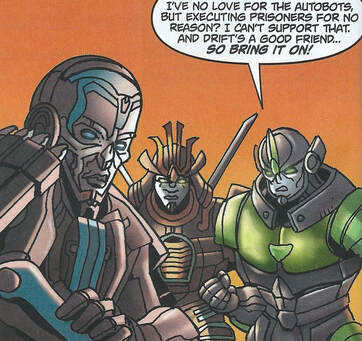 The Decepticons are more pals than the Autobots.
No! It just motivates Knucklehead to back him up by saying he doesn’t like Autobots, but Drift is a good guy.

What follows is a rather confusingly drawn fight involving Lockdown’s harpoon that ultimately results in him falling of a turret to his seeming death in lava.

Not that either Knucklehead or Drift buy this, they now know Lockdown will be after them forever.

But Drift still takes time to let the defeated Autobots retreat, despite being insulted when one says he’d totally make a good Autobot, because he’s a Decepticon for life. Lol.

That’s like one of those moments in Enterprise when someone says “A half-human Vulcan? That’ll never happen!”.

Back in “The present day”, Drift has made a headstone for Knucklehead as he ponders on the fact the clearly more powerful these days Lockdown (well, we all remember what he looked like in the Revenge of the Fallen issues) must have finally caught up with one of them, and a final reckoning for him will come.

Which, again, suggests Etherington knew nothing of the content of the actual film, as I don’t think Drift and Lockdown share a single moment. 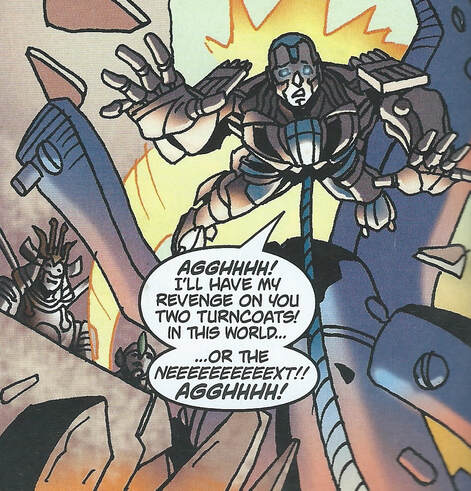 Can't wait to see Lockdown and Drift go head to head again!
Optimus is fairly graceful about the death of a Decepticon that would otherwise have gone on to attempt the enslavement of the human race, and assures him they’ll deal with that threat together.

Though it’ll mainly be Prime doing the taking care of things.

I’ll give Etherington some credit here, he’s used the fact there isn’t really a character like Drift in Prime to tell a story that’s clearly been especially written for the film comic rather than just changing some names on whatever he was going to hand in next.

But this was obviously thrown together very quickly and spends a lot of time on a generic looking character that is of no long lasting consequence and creating a rivalry that will never be mentioned again.

Horacio Domingues’ unusually poor art suggests a rush job as well. Other than an entertaining casual Lockdown chilling in his first panel, it’s a confused mess with very thick inking.

As a relaunch, it’s easily the weakest issue 1 we’ve yet had from Titan and does not make for a promising start. 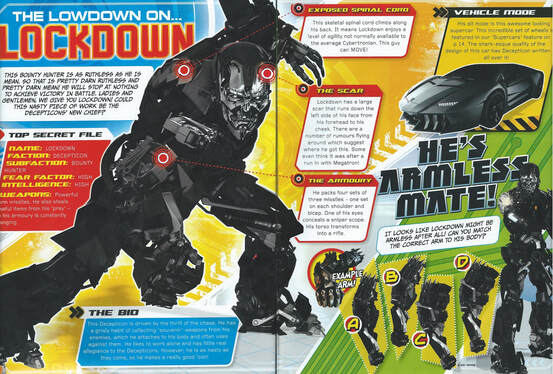 We've had enough Lockdown now.
The rest of the comic does try to make things seem more exciting. Starting with Optimus welcoming “Brave humans” on the editorial page and telling them to watch out for hidden Decepticons. And also making a joke about Grimlock smelling due to not washing properly.

The Lowdown On Lockdown basically describes the Animated version and his hobby of collecting trophies (which the comic does allude to) and treating him as the new Decepticon leader. It also includes a “Match his correct arm to his body” game.

Ancient Terror sums up Grimlock, including dealing with the issue of how a character who has never been to Earth turns into a T-Rex by going for that all purpose Transformers explanation for everything: Shockwave did it. There’s then a simple true or false to check if you’ve been paying attention. 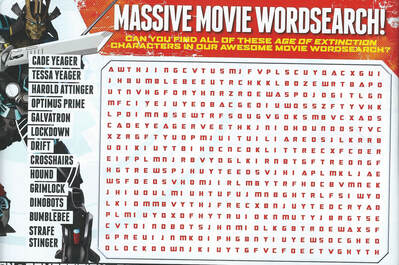 The only time Cade gets called awesome.
A relaunch means more competitions, starting with one for the Rise of the Dark Spark computer game on the PS4. With a multiple-choice question about the name of the two headed Dinobot that...erm... doesn’t include the right answer.

Supercars is introduced by Drift saying his famous catchphrase saying “Check out these babies”, and basically covers the new cars for the film that weren’t featured last issue: Drift; Crosshairs; ’67 Bumblebee; Stinger and Lockdown. Followed by a stitch Prime’s truck mode back together game.

The poster is of Prime, Bumblebee and Crosshairs all looking very annoyed.

Crosshairs’ Conundrums sees the Autobot (talking like a cowboy as he famously does. “Howdy”) challenge you to separate the three Autobots mixed into a spiral; use the Cyber Code (it no longer belongs to a character) to translate Galvatron’s message (DESTROY ALL ENEMIES); work out which Autobot alarm button is real (we’ve had this one before) and guide Crosshairs through the Decepticon computer system and past the Lockdown firewalls. We’ve had that one before as well, but at least the Lockdown drawings are new.

Massive Movie Wordsearch has you searching for various names, including the correctly named double-headed Dinobot, Strafe.

The final two competitions are for even more TOPPS cards (did these ever take off?) and the Orion Pax Transformers Prime DVD. 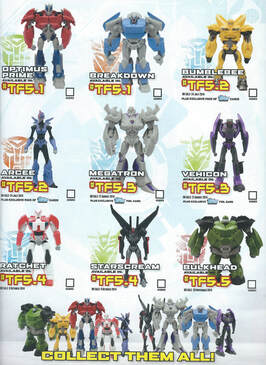 COLLECT THEM ALL
Lockdown’s Letterbox is looking for a postman, who turns out to be Crosshairs, filling the same role Arcee did previously. It’s too early for any specific film stuff, so it’s all Prime characters, including the deep cut of toy only Windrazor by Eva Kirk (8, Buxton). The most amazing thing though is a sad eyed long armed Optimus who just looks like he wants to die from Ryan Collinswood (11, Kent).

We end on a checklist, of every little Prime figurine from with each of the first five issues. Issue one gives you either Prime himself or Bulkhead, and only the fifth issue will not have a choice of two. A cunning attempt to double sales that would fail.

Next week, can the comic improve from a shaky start?

But between issues, there was a little movie called Age of Extinction. So first up on Friday it’ll be back to the multiplex. Remember them? 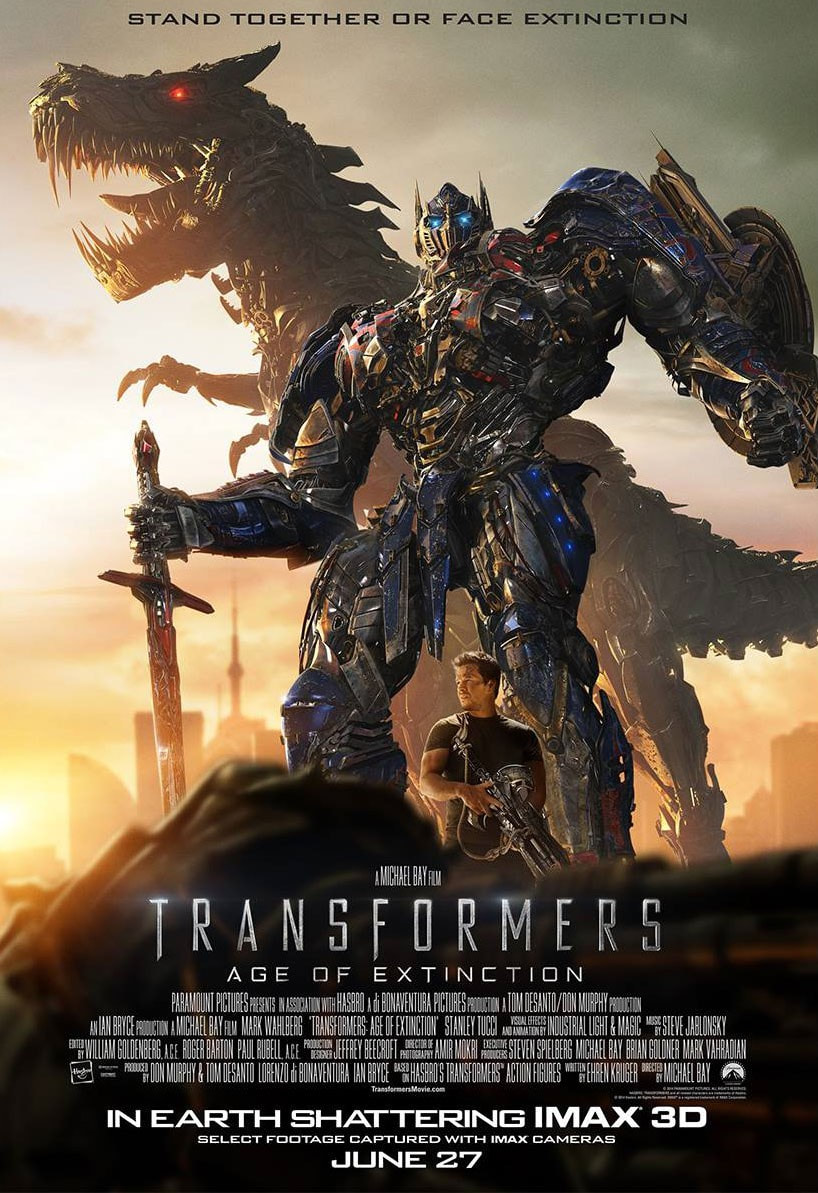