Fuck You, I Won't Do What You Tell Me. 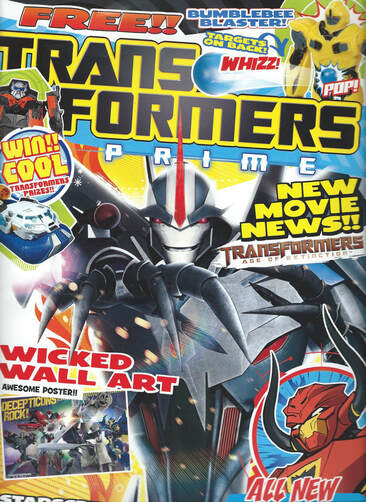 
*See below for release date discussion...


Another oversized cover for cut out targets means another bad scan... moving swiftly on...

So, after close to three years (though possibly not as close as it seems, was just reading the Wiki and it claims this issue was released a month early. And 17 a month late. It doesn’t give exact dates and I don’t recall this, so I’ll go with the advertised date till accurate ones turn up), the fourth Prime focused volume comes to an end. Indeed, as the TV show ended the previous summer, this is the last ever bit of Prime branded fiction.

It’s also Chris Cooper’s last Transformers comic and either he didn’t know he was providing the finale for this continuity or was demob happy as there’s no effort to create a grace note for Prime before we return to the films. None of the Autobots or humans appear and, once again from Cooper, the focus is largely on a repurposed Generation One character he probably owned as a kid. Which is a bit Riker and Troi showing up in the last Enterprise.

But, there’s still the chance for some fun here, as we open on Starscream bemoaning that Predaking (showing no respect by dropping the “The” from his full name) will bow and scrape for Megatron, but not for him.

He just wants a sub. 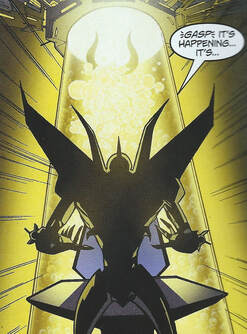 "...A character to get a plot at the expense of the regulars!"
This is a problem he intends to solve by using a Predacon fossil that Shockwave has, through “Sheer stupidly” (pour one out for a writer just having characters point out the bits that don’t make sense rather than try and fix them with a second draft), left unattended in his lab to clone himself a happy little slave.

Using the fossil’s CNA (finally the comic gets that right!) combined with his own to fill in the gaps Jurassic Park style, Starscream quickly gets his “It’s alive!” moment as his new creation emerges. Who looks exactly like the G1 Predacon Tantrum.

That really must have been an old fossil.

Though to be fair, this does neatly continue the 30th anniversary theme of the last issue.

Starscream’s delight quickly turns to annoyance as the new boy won’t immediately follow orders, even after a thump. Instead, he gets a much more violent fight back. Leading to an absolutely hilarious moment of him not being able to understand how someone made from his own CNA could turn out to be so dodgy. Before running away very fast, pausing only to name his creation Tantrum. 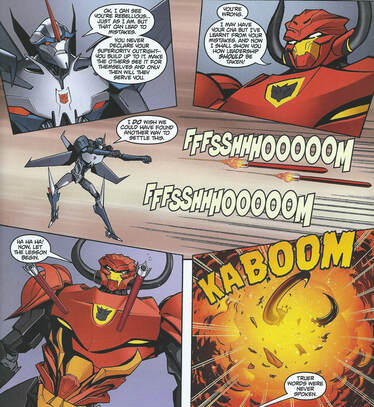 How These Are the Voyages should have ended.
Though Tantrum himself prefers to be called “Supreme beast”. So definitely a dom rather than a sub.

He thinks Starscream is unworthy to live. And it is easy to forget the Seeker is actually quite dangerous. Which is a mistake Tantrum doesn’t live to regret, as his creator fires two missiles into him. Which Tantrum initially laughs at, proclaiming that “Now, let the lesson begin...”...

Before they detonate and Starscream gets to smugly use the opening quote.

Surprisingly for an 8 page strip, we get two devoted to the aftermath of the main plot, as Starscream is far more scared of what Megatron will do when he returns and find dead Predacon everywhere.

Which Megatron does (accompanied by Shockwave and the still denied his full name Predaking). Luckily, Starscream has had enough time to come up with a plan:

Blame a Vehicon. Who insists he’s innocent, but Starscream has also doctored the CCTV to make him look culpable. Which is enough for Megatron to blast a very big hole in him, which all feels very reminiscent of Secrets! from the old Marvel days. 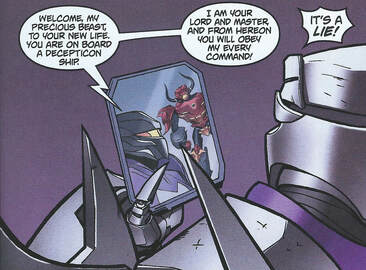 Fake news.
So effectively, Starscream deepfakes a guy to death.

Despite the small cast and out of series guest star, this is another fun romp with lots of nice little moments and great art from Andres Ponce. It’s a pity Cooper won’t be staying around for the relaunch as he’s done some entertaining stuff.

But there’s no time for looking backwards. Titan are actually going to make a push to revive the books fortunes for the 5th volume. Which means a lot of teasing of the new film, starting with a double page Transformers 4 Movie News! 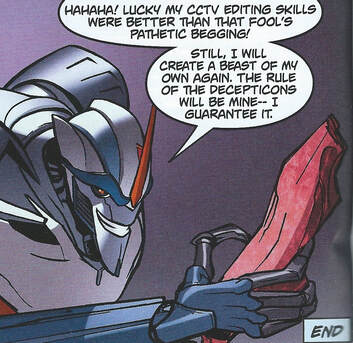 Ron Howard voice: No it won't.
There’s an attempt to tie it into Prime by having the information presented by “Roving reporter” Jack (who is delighted the “Here’s the card that says I’m not a rapist” guy in the film has the same first name as him), who presents information on the Dinobots; the toys; the Rise of the Dark Spark computer game; Chinese locations and Drift’s Bugattie Veyron Grand Sport Vitess (fastest car in the world at this time) alternate mode. Followed by a brief true or false (or “Flase” when it comes to question 2) quiz to see if you’ve been paying attention.

Soundwave’s Stumpers asks you to find how many times you can find Starscream’s name in a wordsearch; work out which of five Smokescreens is the real one; recognise distorted images of three Autobots and find out what message Megatron has for Soundwave using Raf’s code...

Oh wait, no. Instead it’s a simple only use every other letter code. Guess Megatron has finally realised using a code devised by a human ally to the Autobots is pretty pointless. It reads “ATTACK AUTOBOTS SIXTEEN HUNDRED HOURS”.

The competition, for basically the same toys as last month, doesn’t use the code either, asking you to instead name the Decepticon Bulkhead as a rivalry with. 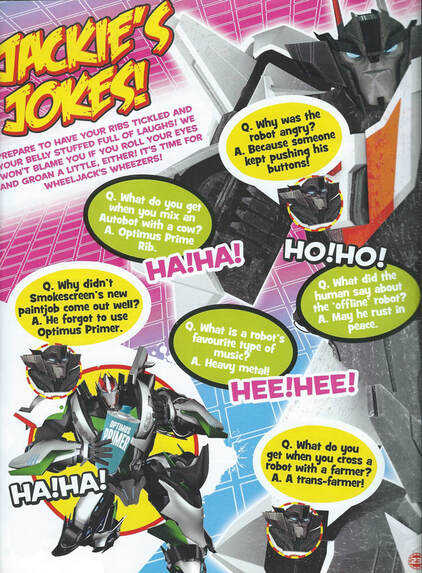 HO HO
Which you can find out over the page from the Clash of the Titans! Bulkhead Vs Breakdown feature, which is basically the same as the old Smackdown and tries to insist with a straight face that Breakdown and Knock Out only have a “Friendship of sorts”.

Though they’re not “Friends” enough for Breakdown to be on the Decepticons Rock! poster with Knock Out.

The contents page encourages you to “Get ready to giggle” at Jackie’s Jokes, where the famously wacky Wheeljack gives you such rib ticklers as “What do you get if you cross a robot with a farmer? A trans-farmer”.

Lucky they pre-warned us about the giggling.

Mega Movie Motors! sees Miko give us her thoughts on the alternate modes of Bumblebee; Sideswipe; Ironhide; Optimus Prime and Ratchet. Unsurprisingly, the Bulkhead style Ironhide is her favourite, they even have a bit of fun placing some stock CGI art of her so she’s sitting on him.

It also has a Repair Shop game, where you’re asked to stick the fallen off parts back on “Breakdown”.

Who turns out to be Skids. Either they gave him the wrong name, or he went into witness protection after Revenge of the Fallen. Which means, amazingly, I was wrong yet again about the last ever time he appeared. Dude has more staying power than I thought.

Massive Movie Quiz gives you 15 multiple choice questions about the films, with a slightly unfair one of “What does the Fallen vow to destroy in the second film?” that only has options for some combination of the Sun/Earth/Moon. When, if he’d succeeded, the entire solar system would have gone boom.

Mega Mouth gives the star letter to Jack Harrington (7, Mildenwall) for his OC Predacon, the amazingly technicolour Sonar Fearer. Which is a hell of a name. 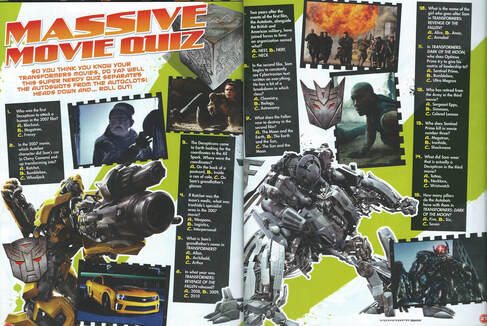 Get into practice for next week.
Jordan Carstairs (11, Glasgow) sends in an Animated Optimus Prime with JORDAN in giant letters across it. Nothing like self-promotion.

The Wiki has it as an error that Megatron and Arcee think don’t recognise it as an Animated character and treat him as a newly created Decepticon. However, I read their reactions (“It is amazing. But terrifying”) as simply being down to how evil he looks and that he seems to have the Decepticon logo on his arm, hence Megatron claiming him.

Amy Watson (13,Wembley) brings us closer to the relaunch with a nifty Sentinel Prime that a banner headline declares “RAW TALENT, RAW NERVES”, which. Hmm. Going on about being raw probably isn’t the best thing to do to a 13 year old.

FBI Fuzzlers sees Fowler (and that means Raf is the only major human supporting character not to appear in some form at the end here) having to decode a message from Megatron that’s actually in Raf’s code (“Fowler, you pathetic fleshbag, you have no hope of ever saving your fellow humans. Give up now and crown me your leader. Yours, Megatron”) and needing to put Tantrum back together after he exploded.

Our final ever Prime puzzle page, Ratchet Recall!, is a slightly half-arsed one asking you to spot the differences between two pictures of an empty room on the Nemesis.

Which is a damp squib to end on, but Prime has, overall, been a fairly fun book with some excellent work from both Etherington and the departing Cooper. By this point, the lack of ongoing stories and it aiming ever so slightly younger meant many older fans had drifted away. And indeed, without Prime making much of an impact in the UK, much of the target audience likely had as well. Certainly not many folk have been reading these pieces.

Which is a shame, as there’s a decent wedge of material here that’s considerably less likely to ever get reprinted that the movie stories either side of it.

Speaking of which, the next page doesn’t declare a relaunch, just a MOVIE SPECIAL. But Bay is indeed back... 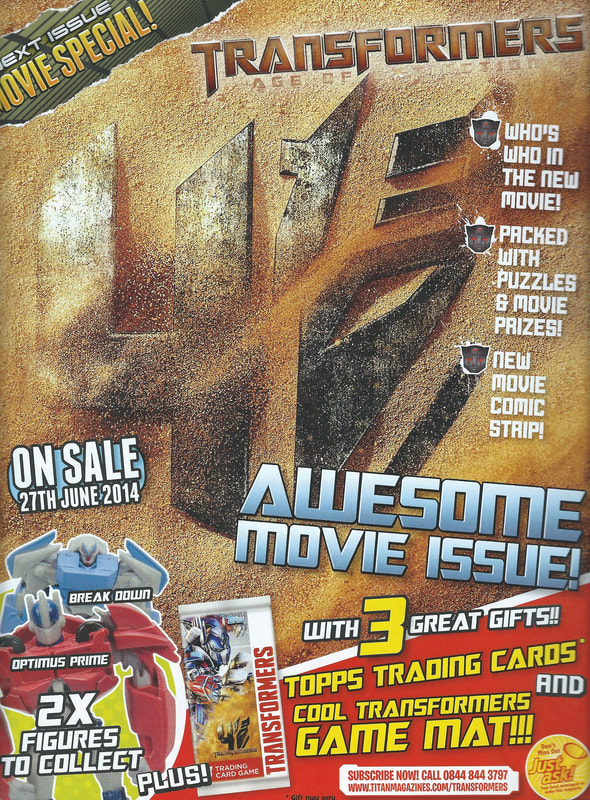