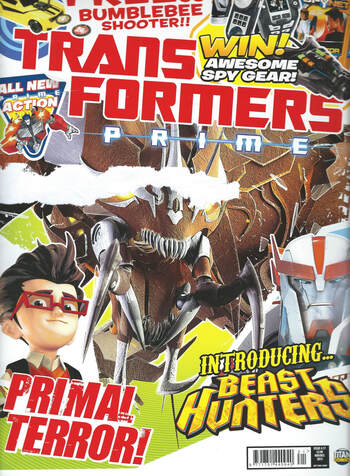 
Keep it busy he says. Shame I didn’t bring my holiday snaps...


I came to this issue with a general air of smugness. The wiki (which reads as if it was heading towards a breakdown at this point in the series) doesn’t have a cover for this issue. So I was all ready to present a little exclusive for you all with the scan.

So of course, not only is it another oversized and hard to scan cover, but mine has a big tear across the front due to an ineffectually removed Bumblebee Car Blaster. Still, try and imagine what the untarnished The Predaking (as he is very carefully refereed to throughout the comic) might look like.

The oversize is for more cut out targets and a ESCAPE! maze game where you have to get Prime past The Predaking clones.

Inside, Collider Scope is our last Prime comic from Robin Etherington, though he will manage a couple of Age of Extinction issues. It’s also technically our first proper Beast Hunters issue, but (as will become more apparent as we head towards the end of this volume) the writers, possibly working quite some time before publication, were given nothing except the toys and the connections to the series are going to snap pretty hard. 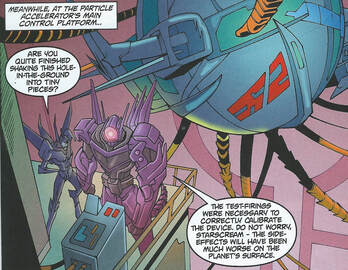 Ol' one eye is back.
For some slightly oblique reason (was it in the news again at the time?), Etherington has been inspired by the Large Hadron Collider in Switzerland. Meaning we open in Geneva with characters speaking the local language at one another before a massive Earthquake strikes and ruins the attempt to introduce some culture to the younger readers.

This and other similar earthquakes across Switzerland and France gets the American President on the phone to Fowler, as in the middle of the quake zone is a top secret particle accelerator they’ve lost contact with. That could now well be in Decepticon hands and even if not, the nuclear reactor could well be damaged and a big problem for itself.

Incidentally, it’s “Mr” President now. Obviously the 2012 election didn’t go so well for the woman who was last mentioned in issue 10. Interestingly, her successor is clearly allowed to know about the Autobots from the off.

It's The Predaking!
As a sign this may be something of a padded story, a couple of panels are wasted on sorting out the difficulty of getting a groundbridge into the facility. But, at least once there we get a nice visual gag of Bulkhead and Wheeljack (making his first appearance in the comic) banging their heads on the ceiling of the tunnel whilst the shorter Arcee doesn’t understand their problem. With Optimus making the obvious point they could just drive along.

At the reactor, we get another first appearance for the comic, as Shockwave is annoying Starscream with his elaborate plan to use the reactor (with the earthquakes as a test calibration. Very like the Flame arc from Marvel) to open a Space Bridge to Cybertron and bring over loads of Predacon beasts. 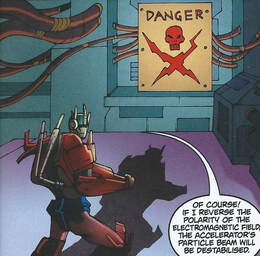 This is fine.
This might all get a bit confusing if you’ve not been keeping up with the show.

The Spacebridge is opened and The Predaking comes through.

More fun than the resulting fight however is Starscream being snarky at “Flunk-Head and Flat-Tyre—the Dim Duo”.

Things get odd as Prime, keen not to blow up the reactor, winds up in front of a massive skull adorned DANGER sign (not the sort of thing you want to come across in a nuclear reactor) and decides he needs to destabilise the particle beam by reversing the polarity of the electromagnetic field. Like he’s Jon Pertwee.

Which, in a very confusing ending, in pointless technobabble as The Predaking just flies into the reactor, making it explode. Which doesn’t cause the nuclear holocaust that everyone was worried about. It’s not even clear if it kills The Predaking or not. 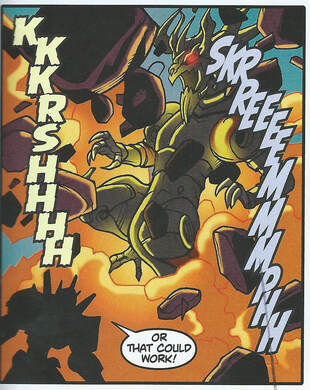 Chernobyl (2019).
So we end on an odd attempt at melancholy as everyone stands around wondering if they’ll ever get to go home properly.

This is a strange one for Etherington to end his Prime run on, rather tepid and with somewhat underwhelming action.

Possibly this had to be thrown together very quickly, as Horacio Domingues draws Optimus in his original Prime body for the first half before having him inexplicably in the Beast Hunters look for the rest. Suggesting they were getting information as they went along and had to work around that.

The rest of the comic (after you go past Raf’s code again pointing you to a page you can use it to win prizes where there are no prizes to be won) has the sense to prepare readers who don’t have access to the cartoon, with All About... Predaking! filling in his backstory and Shockwave’s Predacon cloning experiments. It does make the mistake of calling the Cybertronian equivalent of DNA, CNA, CAN instead. But as it’s a really stupid idea, I can let that go.

Soundwave’s Stumpers has two name the mixed up Transformers games; asks you to decode the secret message and which emergency button has the correct Autobot logo it. 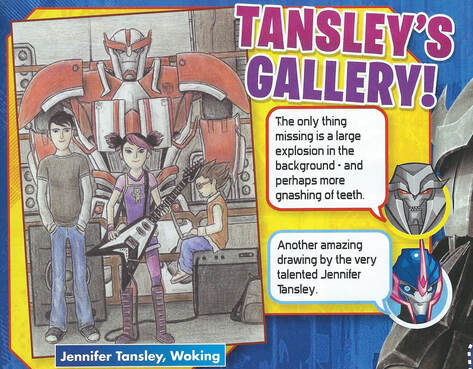 The kids are alright.
The actual competition, not on page 10, is for various Spy Net toys. Again, it doesn’t even use the code, instead asking you what Ratchet’s job is.

Past an advert for the Plants vs Zombies comic that invites you to get ready to “Soil your pants!”, The Beast Hunt! sets you four challenges to find The Predaking. Mostly using Raf’s Code.

The poster is where we get our other Beast Hunters reworking of a character this issue, as Bumblebee is in his black deco.

Bulkhead’s Wordsearch is based around the comic, but foolishly forgets to include the “The” in The Predaking.

The Trans Files covers the history of the Forge of Solus Prime, in particular Prime getting his new body and the fact he can fly now. As part of the conceit that this is a government report, rather sweetly the screengrabs are claimed to have been retrieved from damaged Autobot CCTV.

Hunter or Hunted? is a multiple choice flowchart to find out what sort of Beast Hunter you are, ranging from Optimus to Raf via Starscream and Bulkhead.

One of those seem a little uneven in fighting giant monster beast stakes. 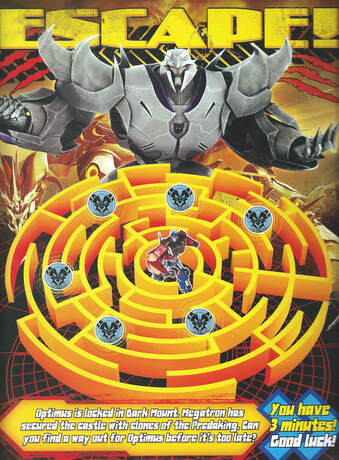 ESCAPE
Mega Mouth asks the tough questions when Lucas Barton, 5 Lancs, sends in a Dark of the Moon Megatron drawing covered in glitter. Prompting Arcee to wonder if he’s secretly a showgirl. Which only gets a “No comment” from Megatron.

So, it turns out that Megatron is the Transformers equivalent of Elisabeth Berkley.

Chloe Tibbit, 11 from Aylsham, writes in to talk about her love of Knockout. Because he makes her laugh. She’s even included a profile of herself as his right hand robot.

This turning to the dark side worries Arcee, but delights Megatron, and after a few weeks where I’ve seen women in the fandom get some real needless shit, this and another fine drawing of the humans and Ratchet from Jennifer Tansley is a good reminder of how much they contribute to the community at any age.

Most terrifying thing in the issue though is Double Trouble, a spot the difference between two panels from the comic where Shockwave is given two eyes in one of them. Freaky.

Next week... Well, I was confident that we’d had our last Christmas story. But as issue 18 is being promoted as a seasonal one, could I be wrong? 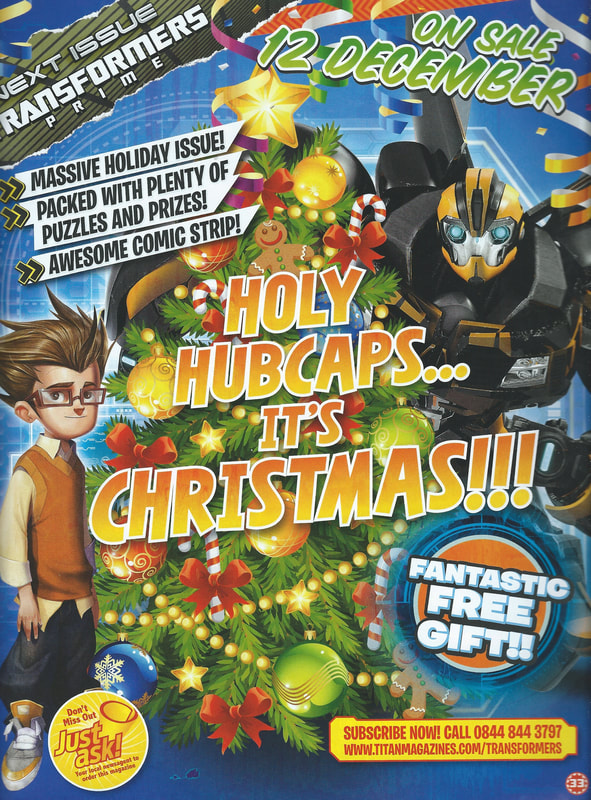