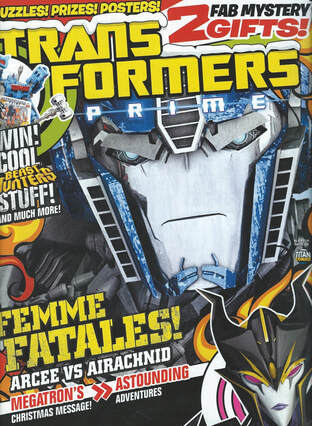 
Getting it to follow me isn’t the problem—stopping it from frying my tail before I get there is!


So it turns out that when I confidently described issue 3 as the last ever Christmas story I was indeed wrong, as we do manage to get one final seasonal issue before the end.

However, I can be forgiven for not having remembered it as the only Christmas connection is we’re told at the start that Jack is starting his school holidays and there’s a tree in his house in one of the last panels.

Both of which feel like they might have been last second additions to Chris Cooper’s script (he’ll be taking us through to the end of Prime) when they realised it was that time of year. There’s not even a Silent Night joke about the effects of the EMP.

Said EMP subverts what initially looks like it’s going to be the second taking pot-shots at video games strip the fourth volume has done, with Jack begging his mum to be able to play a little later so he can finish the “Level” he’s on. Which feels a bit anachronistic, but maybe he he’s a retro player. 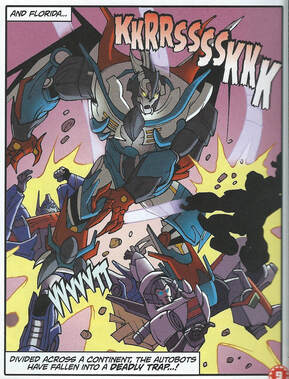 Give a warm welcome to Ultra Magnus.
This just turns out to be the setup for a brick joke at the end of the issue though, as once the power has gone out in the entire town (something Jack can apparently tell from looking out of his window, small town?), we cut to the Autobot base and Agent Fowler learning that electricity has failed across all of the United States due to an EMP. Making him freak out at the thought someone has set a nuke-off.

Luckily, energon power is immune to the attack, and the Autobots quickly work out it’s a coordinated attack done from more than one place, transmitted through metal ore deposits.

The more than one epicentre revelation coming from Ultra Magnus... who dramatically makes his first appearance in the comic by just sort of appearing to deliver exposition.

In Minnesota, at Febris Metal Inc. (which feels like an in-joke), Starscream and the Lt. Uhura quoting Soundwave effectively confirm this and are very smug about the fact the Autobots will be heading into a trap.

Or rather three traps, as Arcee works out there are also machines in Florida and Arizona. So they split into appropriate teams (including the also new to the comic Smokescreen) and go to find three machines.

With Prime oddly expecting Ratchet to know what the one in Minnesota does. But he’s a doctor, not a scientist damn it. 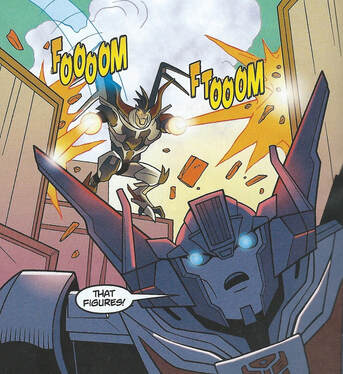 2020 mood.
All of which is a fairly mechanical way to get the characters into position for three big fights, as Darksteel, Skylynx and The Predaking attack!

A McGuffin with a specific super-guardian suggests a possible influence from IDW’s Revelation mini-series. It also firmly takes the comic out of cartoon continuity as this combination of characters on Earth is impossible at any point in the show.

Which is understandable if Cooper didn’t have much information to work with, but is a bit of an issue when the comic is assuming you follow the cartoon to know who people like Ultra Magnus are.

The highlight of the three fights involves Wheeljack, resigned to the fact Skylynx will come after him when they split up, doing some impressive gymnastics to avoid blasts that makes him a literal Jumping Jack Flash. We also get Bumblebee talking normally for the first time in the strip, something Cooper seems to have found out about as he was writing as ‘Bee is doing his usual sound effects earlier.

Talking is also what you get in Minnesota, as Starscream appears and smugly reveals all of this is just a divide and conquer plot to split up the Autobot forces. Which feels like a slightly underwhelming use of such a powerful McGuffin. 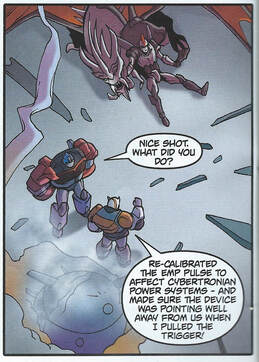 "Let us never mention this again"
It’s also a plan that doesn’t remotely work as Ratchet just uses his own EMP machine on him and The Predaking to knock them out.

Which suggests Ratchet has invented a way to win the war. So it’ll probably never be mentioned again.

As the power comes back on, we end with Jack on the phone to Raf, discussing whether they should tell the Autobots about the blackout, before deciding it was probably nothing. We then end on Jack being dismayed his game didn’t save and he’ll have to play the entire level again.

That’s a very underwhelming story that takes ages to get to its big action scene before not a lot happens. Notably, the Arizona fight is almost completely ignored. Solid art from Domingues and a bit of fun from Wheeljack are the only real highlights here.

The rest of the comic celebrates the season by giving us all what we want for Christmas: A femme fatale fight as Airachnid takes on Arcee in The Ultimate Smackdown. With it feeling more in favour of the Decepticon as the best it can say about Arcee is Jack really loves her bike mode. 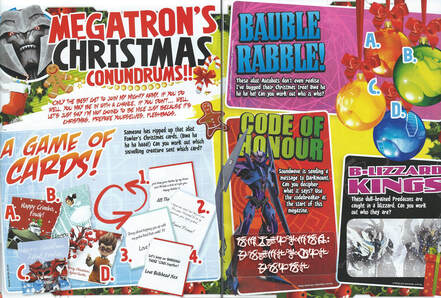 Christmas is coming, and so is Megatron.
The main real Christmas treat is Megatron’s Christmas Conundrums!! Games include working out who sent which Christmas card to Fowler; recognise which Autobots are being reflected in baubles; decipher Soundwave’s “Code of Honour” using Raf’s code (which points you to the right pages to use it this issue) and recognise which Predacons are lost in a blizzard.

The competitions (using questions rather than the code) are for Domino Express Sets and more Beast Hunter toys. The former helpfully spells out the answer to its question (“What type of creature is Hardshell?”) is to be found elsewhere in the issue.

Or rather, right on the next page as The Trans Files covers the All Hail Megatron inspired Prime Insecticons in general and Hardshell in particular.

Past the poster of Prime and the kids, Whizz Bang Avenue! Wants you to help Bumblebee through a maze in pursuit of Knock Out.

Shame he doesn’t know Knock Out already has a boyfriend.

Soundwave’s Stumpers asks you to spot the differences in a duplicate of a panel from the comic; use Raf’s code to translate Soundwave’s message (neatly tying into the strip, “Power cut at 16:00 hours”); recognise the extreme close ups of Autobots and find out how many times you can find the word Megatron in a grid.

Mega-Mouth tires to get into the season, though Megatron doesn’t understand it, even with Arcee reassuring him that Starscream has gotten him a nice jumper. 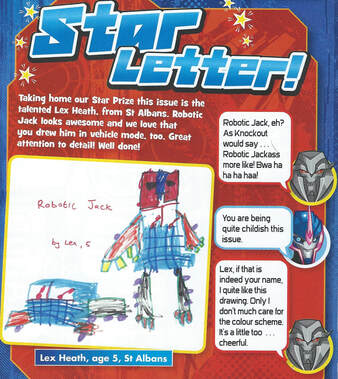 ROBOTIC JACK
His grumpiness extends to not appreciating the frankly fantastically named Robotic Jack art from Lex (5, St Albans), which leads to the second time we’ve had Megatron doubt a girl is using their real name.

Arcee has bigger issues than Megatron to deal with though, as Bailey Williams (Newark, 9) sends in a photo of all his toys and makes her question her very nature as fictional character by reminding her of the disconcerting fact there is a toy of her.

Next week, the really disconcerting moment comes as we enter the final ever year of original content UK Transformers comics. 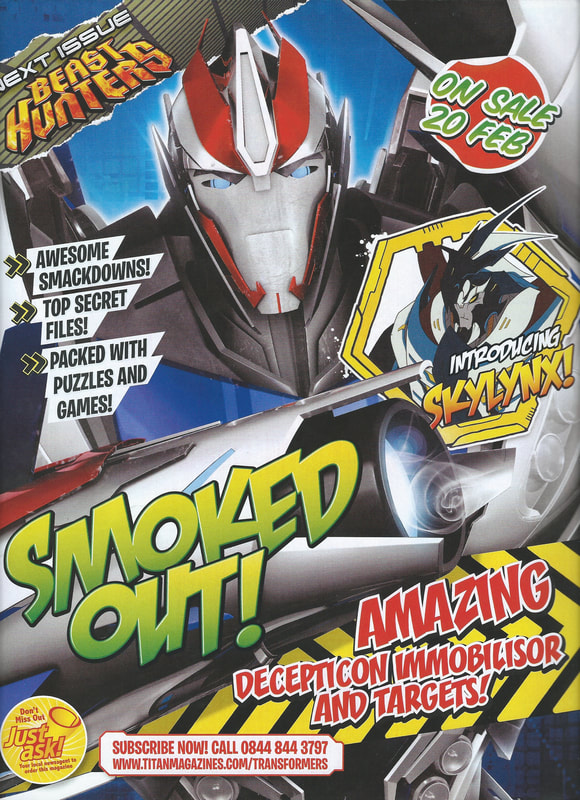