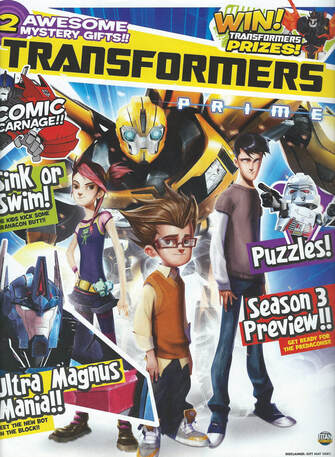 
Sometimes I worry about the things you learn from hanging around with a bunch of alien, warrior robots.


There’s a shock development as the book increases production to once every two months: A comic with an actual comic in it. What a concept. It’s worth remember that, though it’s only been two issues, in real terms it had been six months since the last strip.

Speaking of big gaps, we finally get the Chris Cooper written story promised for issue 11, ten months earlier. And we still have no idea as to why this massive delay happened, rather than it just being bumped back one issue to make room for the Halloween issue.

One reason that is suggested by the cover, is that we are now into the territory of promoting the third, relaunched, season of the show, Beast Hunters (the pimping of which might have been the reason for going bi-monthly again). After the story got knocked back once, someone may have thought that a story featuring a monster combiner would fit better here. Though in reality, all it does is make it look odd Cooper invents a new team of beasts rather than using some that would be on shelves by the time this was released. 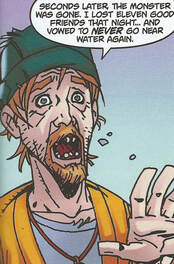 Nick Roche?
What we can be sure of, is Cooper is indeed a big Doctor Who fan, naming Fury From the Deep after a Patrick Troughton story that no longer exists. Though the opening, with a fishing boat sunk by mysterious giant monster, is far more reminiscent of the oil rig attack in Terror of the Zygons.

Cut to ten years later, and the lone surviving crewmember (and captain) is now a crazy hobo man, telling his tale to anyone who will listen that he can grab in the local diner.

Where, by amazing coincidence, Raf, Jack and Miko have stopped for lunch whilst on holiday with Bumblebee. They are to giant robot attacks what Jessica Fletcher is to murders.

After Raf checks out the story online, they decide to drive out to the not at all sinisterly named Devil’s Cove to check it out. Because hey, it’s been ten years and no one has seen any Decepticons in weeks (unsurprisingly, this is very much set before the end of season 2). What can possibly go wrong? 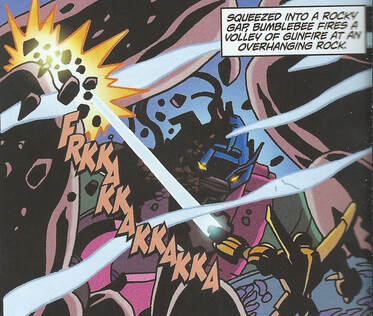 Lovely art, terrible narration.
This confidence extends to leaving Bumblebee (firmly with a Camero alt mode) on the beach and the three kids heading out in a dinghy. With an interesting little character touch of Raf being the only one to not have a swimming costume. Or indeed any clothes other than his standard outfit.

In a completely unguessable surprise, the mysterious monster does attack the small inflatable. Which, as it’s clearly no use for the purpose we later find out the beast is attacking ships, suggests it will pounce on anything in the local waters. Making you wonder how there’s only the one online report of a missing ship.

Seeing the dinghy sunk, Bumblebee jumps into the water and, in a nicely done mini-cliffhanger before the comic takes a break for the quiz pages, is confronted by zombie Piranacon!

Normally this would annoy me a bit. Prime is a rich enough take on the concepts of Transformers not to need shoehorning in gratuitous Generation One rehashes. Especially one only the really die-hard fans are going to remember in the first place. 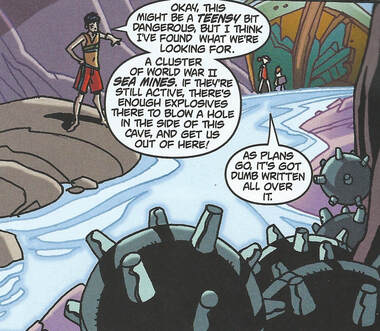 A mine is a terrible thing to waste.
But, it’s just a great visual. With Dario Brizuela clearly having a great time tweaking the original design to both Prime it and zombiefy it.

After the break, the kids wake up in an underground cave. Though I’m not sure why the mindless monster saved them when it showed no similar courtesy to the previous sailors.

Still, they find the cavern is filled with numerous, captured and stripped of metal ships. There’s also a dead Decepticon. Which Raf, using the Wiki, is able to identify as Snaptrap, a combiner team leader. So, clearly the rest of the team are stomping about in Prianacon mode without a brain (though unlike the G1 version, you can’t tell it’s missing a sixth of its body by looking at it) and trying to repair itself with the captured sunken ships.

And now, after a fairly brutal fight, with the far more promising subject of Bumblebee. 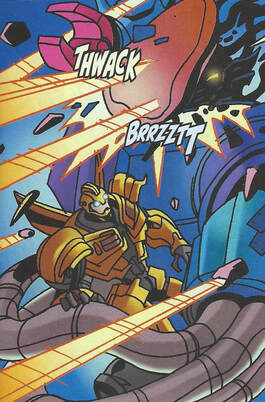 He didn't sea that coming.
Luckily the cave itself includes an unexpectedly vast amount of World War II sea mines. I’m not sure how many of those would be around the American coast, it does feel like an author thinking more of the UK North Sea. But maybe Piranacon gets about.

Despite worrying about it being a dumb plan (and actually having no way of knowing there’s a life and death struggle going on outside), the kids set the mines off. Blowing a hole in the cave wall. Which has the double effect of flooding the cave and taking out Piranacon, sending him to Davey Jones. Bumblebee saves the drowning kids and we end on Jack and Miko deciding they’ve had enough of the beach.

This is a lot of fun, making it a shame that it has been so delayed. The action is well done, the art great and there’s some fun jokes.

The only real flaw is the narration is rather over done again, showing a lack of faith in the art to convey what’s happening. So a panel of Bumblebee watching Piranacon sinks to the bottom of the ocean feels the need to say “Bumblebee watches as the fatally wounded Decepticon sinks towards the inky depths”. This feels like it may have been added by the editor as is it’s far chunkier than the actual content. Even with that slight dumbing down though, the comic feels back on track. 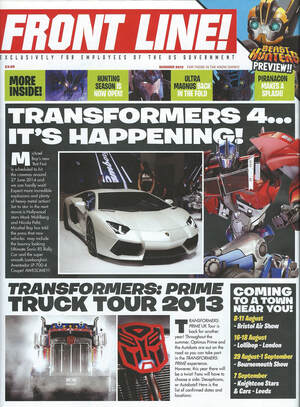 IT'S HAPPENING
We’re promised both a season 3 preview (though in terms of branding, the insides aren’t sure whether to call Beast Hunters a new show or not) and Ultra Magnus Mania!!, both of which are delivered inside.

Beast Hunters Sneak Peak! sums up the changes and new characters for the show, including Shockwave, P-P-P-P-Predaking (who wrote this, Porky Pig?) and the aforementioned Magnus.

Front Line! feels like it was supposed to go on the back of the comic as with the previous issue, as the banner promotes various things within the comic, including Piranacon “Making a splash!!”.

There’s two main news features. The second, and most minor, is the continuing Optimus Prime truck tour. Which now lets you chose a side between Autobot and Decepticon.

The big one though is TRANSFORMERS 4... IT’S HAPPENING! Which I suspect some fans would take as a threat, but we’re promised a release date of 24th June 2014 and possible alternate modes like Ultimate Sonic RS Rally Car and the “Super smooth” Lamborghini LP 700-4 Coupe.

All About Ultra Magnus profiles the new Autobot and is written in a very over-excited manner. “There is no doubt this ‘Bot can fly! He outsmarts the Predaking and delivers the Autobots to safety!”

Raf’s Code on the opening encourages you to turn to page 14 to use it to win prizes as normal. However, not only is the competition for a Prime Series One: Decepticons Unleashed DVD and voyager Beast Hunters toys on page 11 instead, it asks a question rather than the usual codebreaker. Indeed, it’s the same “What is the leader of the Predacons called?” question as last issue. Albeit with one of the wrong answers in the multiple choice changed. 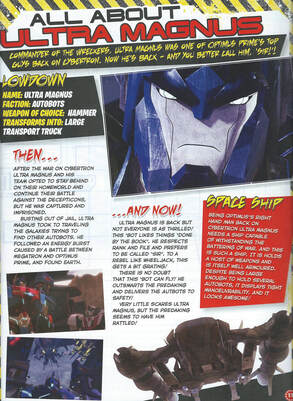 It's hammer time.
Actually on page 14 is Kre-O Transformers Conundrums! Which asks you to identify the real Bumblebee from various silhouettes; recognise the “Warped” Autobots; help Ratchet (though the art is actually of Optimus) through a maze and spot the difference between two pictures.

Past the poster of Prime and Ratchet and Bumblebee’s Beach Bonanza! has quizzes themed around the comic. Which asks you to recognise some bots in the “Ripples” of the water (basically the same as the above “Warped” game); follow the correct tangled wire to find Raf’s laptop and solve the Underwater Wordsearch.

Soundwave’s Stumpers wants you to identify the Autobots in Soundwave’s short-circuited vision (basically the same as the ripple and warped games. Someone is running out of ideas); actually use Raf’s code to crack a secret Autobot message; help Soundwave hack the Autobot computer by going through a maze whilst avoiding the malware and reassemble the letters to find out Soundwave’s new description for Autobots (“Pathetic”).

Mega-Mouth has Zara Evelyn Cousins (12, Powys) send in her OC, the female Decepticon turned Autobot Night-Fire. To which Megatron reacts like a man on Twitter always does to a woman in the fandom both being creative and existing by doubting Zara is their real name and that Night-Fire deserves to die.

Megs is more receptive to David Kubiak, 9 from Gloucester. Who has sent in a purple Omegatron, who turns out to be Megatron’s sister. With Arcee hoping she’ll tell her brother off for being such a bully.

Next week, it’s the ultimate bully as Predaking and the Beast Hunters arrive. With, uniquely, some drawn art of the Decepticon on the NEXT page rather than a CGI stock shot. 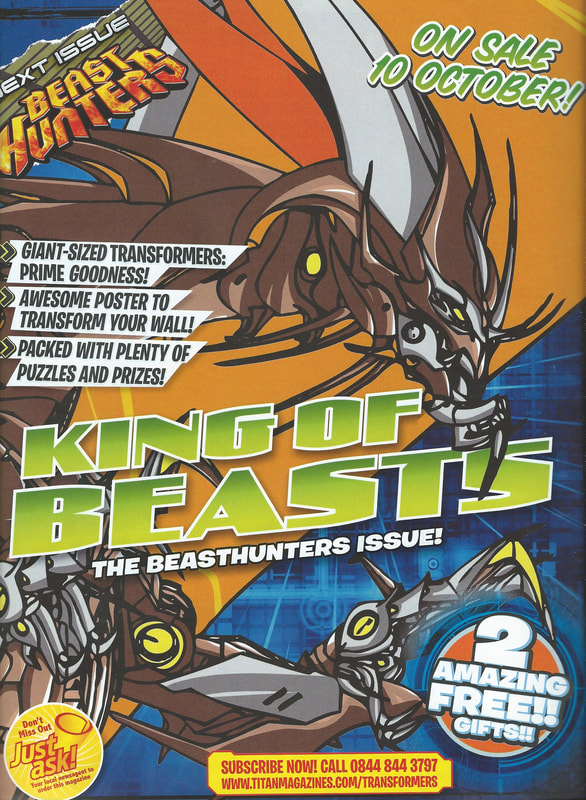