I Love to Hate You. 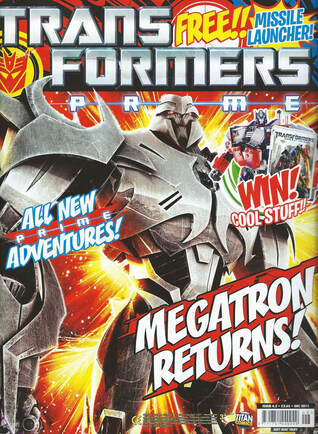 
If finding out stuff makes one “Geeky”, then I am an Autobot geek and proud.


With last issue being meet the Autobots, the second turns the focus onto the Decepticons. Though not quite in the same way, largely because an entire issue of just the villains seems to have not been an option. But also it’s the case that, rather than a general introduction to the entire team, this eight pages is very much about our boy Megatron.

According to his blog at the time, Etherington had wanted to show a different side to Megatron for a while, in particular that at one point he did have qualities that made him a leader worth following. This suggests to me this probably started life as a film strip, hence there only being one role for another Decepticon from the show that’s a little out of character as we’ll see.

The story has a framing device to give the Autobots some presence, as Optimus and his “Human charges” (plus the other ‘Bots) are having a rare day off to visit the filming location of Captain Kirk’s death in Star Trek: Generations. Though oddly the facts Raf is able to shoot off about the Valley of Fire from the guidebook does not include what is surely the main tourist lure for the place. 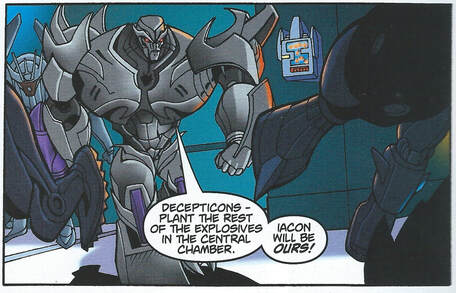 Big Dick Energy.
Like the thing that killed Kirk, the amount of facts that Raf knows provides a bridge to the flashback, as the celebration of geekyness results in a six year old looking Miko asking for the inside skinny on the origin of the war and Megatron. Prime chooses to tell her a story showing Megs wasn’t without compassion and leadership at one time...

After a quick summing up of the rise of Megatron, how the Decepticons originally felt they had a real cause and the fall of various City States such as Kalis, Tarn and Vos, Prime talks of how Iacon was the last major Autobot stronghold left.

So Megatron attempts to lead a sneak attack on the Iacon Energon Refinery, thinking that taking that out will remove the threat of Optimus.

Which Prime has anticipated, so the sneak attackers in turn are sneak attacked. With it quickly looking like Megatron is finally going to be defeated forever. 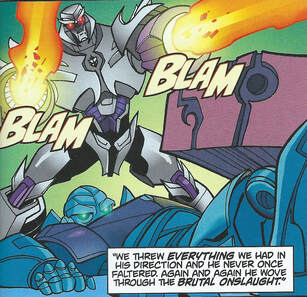 "I am wanking as I write this"
Which is when the story suddenly turns into an unexpected love letter to Megatron, from an Autobot who has already talked about having his defences breached. Because Megs may be fine with authorising suicide missions, but he won’t go on one himself. So he orders the talkative Soundwave (as he’s told not to be snarky because that’s Starscream’s job, I would guess that’s who this was in any film outline of this) to carry on planting the bombs. And when Soundwave is shot down and his other troops scattered, Optimus expects their leader to run.

Instead, Megatron jumps into the fray, saves Soundwave and motivates the others as he “Rallied their broken spirit”, before detonating the one bomb to cover all their escapes. But Prime is left with a clear shot at Megatron... and chooses not to take it, having become clearly smitten.

There’s one unexpected twist, especially read now in the era where there is a big trend in finding redemption or at least something to admire in the big villains in a franchise. This was after all released a month before The Death of Optimus Prime was put out by IDW, and two months before the start of More Than Meets the Eye began the road to Autobot Megatron. 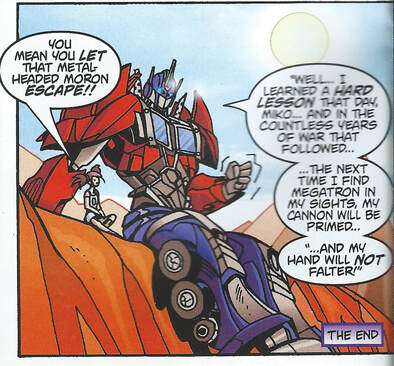 SPOILER: The next time they meet, Megatron gets away.
But rather than ending with Prime still showing any mutual respect for Megatron, or mourning the loss of his old friend, he flat out says he was wrong not to blow the top off Megatron’s head. He’s too much of a bastard now and has caused too much death. Next time he has the Decepticon in his sights, his canon will be primed.

Which may have been a Hasbro mandated thing (you can’t portray the baddy in a positive light in the kids comic), but gives the story a novel ending that actually takes a strong pro-kill Nazis stand that’s more relevant than ever in 2020.

Two issues in, and with my original reading way back when almost entirely forgotten by this point, the Prime comic continues to be a pleasant surprise. It really feels like Etherington has come into his own here, telling an engaging and fast paced story that does interesting stuff with both Prime and Megatron whilst taking cues from stories like State Games. With Horacio Domingues art more solid that what we got last month (including some fun generics).

All in all, a winner. 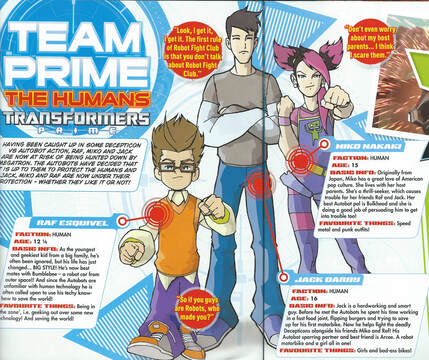 "I sure do love me girls and bikes"
Less winning is, after getting her first name wrong last issue, Miko Nakadai becomes “Nakaki” on the meet the humans (drawn versions rather than the CGI models) double spread.

Equally worrying, is that Jack is revealed to be excited by Arcee because she’s a “Robot motorbike and a girl all in one!” and his favourite things are “Girls and bad-ass bikes!”.

I hope Arcee never reads that, or she’ll be washing her saddle for a month. Thankfully there’s another Missing Link! to distract her.

The episode guide hits the second part of the opening, and correctly has Ratchet’s “I needed that!” as the funniest moment.

Go Go! Energon Game sadly isn’t a game based around the second cartoon in the Unicron Trilogy, but you chasing a friend to the finish line of a “Bulkhead crashes into you! Go back a space” style boardgame.

Past the poster (a nice cheery close-up of Megatron’s face), the Raf’s code based competitions are for Dark of the Moon on DVD; again, the Kre-O sets; the Dark of the Moon annual and The Worst Case Scenario: Mars books. 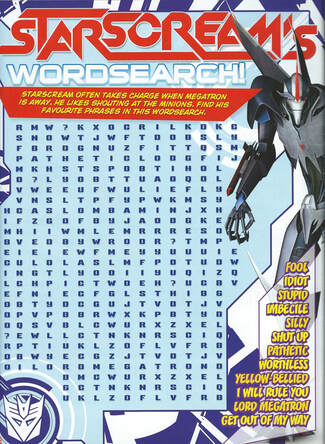 Most of my favourite words are on here as well.
Find Miko! has you use the Raf code to locate he on a grid of a CGI city grid that, as with the similar Barricade one a few months ago, has clearly been repurposed from somewhere else. Whilst Starscream’s Wordsearch reveals his favourite words include “I will rule you”. Wonder if he wrote Spyfall Part 2.

In Mega-Mouth, Andrew Stiffnel sends in some Sideswipe art and a letter that, from the way it’s written was clearly originally headed “To Megatron and Sideswipe” and has been changed to “Dear TFUK”. He also praises Megatron teaming up with Optimus at the end of the most recent film, meaning Prime Megatron has to, again, insist it was all a ruse. 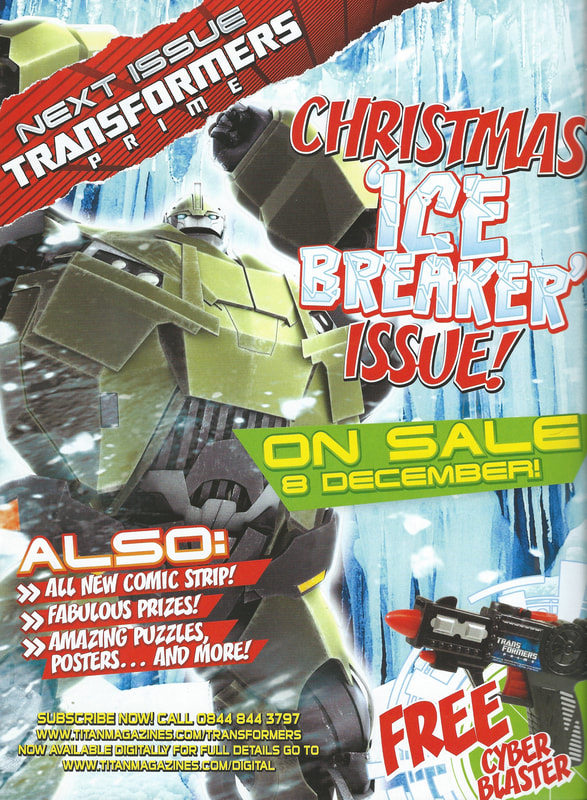