Rising up to the Challenge of Our Rivals. 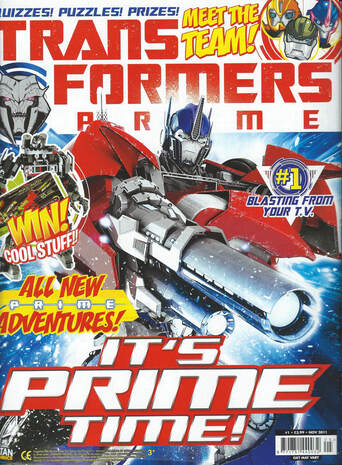 
For a medical officer, Ratchet sure has a strange interest in blowing stuff up!


Though as I said last time, the switch to Prime was a sensible one (though there’s evidence in this issue that it wasn’t as smoothly planned as I would have guessed), it did present one problem.

Whilst the film comic could assume that the bulk of the target audience had either seen the movies or picked the basics up through osmosis, Prime as a show was stuck in the same curse as all the recent series of being on a cable channel with limited viewers. Animated had not made much impact here and the comic had died very quickly. Prime will do better, both on shelves and in print, but it still will never quite become a powerhouse (and the reason the piece on the cartoon was an addendum when the films were treated as part of the same series of comics is this will wind up a slightly alternate timeline to the show).

So this first issue is very much focused on introducing the Autobot cast to people unfamiliar with the series. Indeed, the only Decepticons to appear are identical drone Vehicons. This is the bow of the good guys.

Etherington decides to do this by using one of the standard meet the team exercises in comics: The Danger Room scene.

That's one floor that will never threaten anyone again.
So Ratchet has built the SAFE training room (there’s a cute gag from Raf assuming it must stand for something like Systems And Firing Evaluation, but Ratchet just admits its supposed to be a safe room to train in, but now plans to steal that), where the Autobots can be put through their paces whilst at the same time expressing their basic personalities.

So Prime is earnest in their need to prepare against an enemy that outnumbers them; Arcee is flippant; Bumblebee makes some “Beep beep beep” talk and Bulkhead enjoys the fighting so much he accidentally takes out a big chunk of the floor.

Revealing a nuclear bomb. That’s just started a countdown. Which surprises Prime as the old silo they’re using as a base was supposed to have been cleaned out.

More problems come from a team of Vehicons having detected the radiation and assumed its energon. So as they attack, Prime splits his team in two, with Ratchet and Bulkhead (holding up the ceiling) dealing with the bomb, whilst the rest go out to kill the attackers before they realise and report they’ve found “Omega One”.

Do not fuck with Ernie Hudson.
Of the humans, Jack and Miko (or Mika as the issue occasionally has her) are largely passengers, but as the computer guy, and someone more familiar with Earth tec that Ratchet, Raf gets to defuse the bomb by making the counter go in the opposite direction. Leaving Bulkhead happy he can finally go join the fight... only for Prime and the others to have already mopped up the Vehicons.

Which leads us to our surprising, considering this is an aimed at kids comic spun-off from a show that generally portrays US/Autobot relations in a good light, twist. Agent Fowler turns up to take the bomb away... despite not having been summoned.

Which is when a pissed off Prime loses his shit, flat out accusing the US government of deliberately accidentally forgetting to remove a bomb, just in case. To which Fowler can’t officially reply, but basically admits to being very likely.

Which is an unexpectedly dark turn for this to have taken right at the end. Though there is a final comedy beat as Raf suggests replacing the more elaborate target range with pop up cut-out Megatrons, something Bulkhead can get behind. 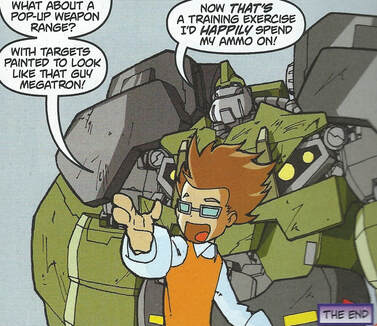 Jesud Raf, what happened to your hand?
And if I’d been editor of the comic, I’d have made this one of the issues with a larger than usual cover and those cut-out Megatrons as the gift.

This is actually a really strong introduction to the world of Prime, establishing the characters well if you haven’t seen the show, but not beating you over the head with exposition if you haven’t. The Vehicon attack is perhaps a little redundant (though it gives us some of the more solid art), but overall this is a nice start that shows Etherington is really going to suit this style of Transformers whilst still providing a few nice little twists, like the bomb.

It’s also pleasing to have a story like this where the training room doesn’t break down and try and kill everyone, Ratchet’s build isn’t the problem.

Ironically, considering it’s the Bay designs artists are supposed to struggle with, Jeremy Tiongson’s art is the one rough area, looking like it was drawn in a tremendous hurry despite a couple of good panels during the fight. Overall though, the strongest issue we’ve had in a while. 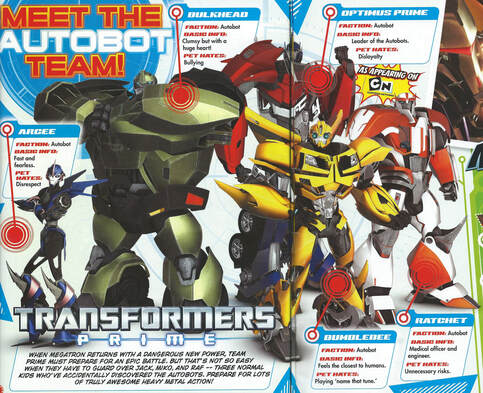 Arcee definitely won't put up with your shit.
A new volume means a drastic whole new look... so now it’s Raf presenting the code for the quizzes rather than Soundwave.

In keeping with the focus of the comic, we Meet the Autobot Team, a quick character summary of the five main Autobots, where we learn things like Arcee hates disrespect and Bulkhead is clumsy. There’s also a Missing Link puzzle on the same page, asking you to work out which is the correct chunk cut out of a photo.

Megatron’s Favourite Words... Search! lets us know his favourite words include “Optimus Who?”, “I rule” and “Snivelling idiot”.

Episode Guide Volume One: Prime—Darkness Falls Part 1 is an incredibly brief summing up of the first episode of the show that’s careful to not mention Cliffjumper dies. At the rate of one episode an issue, the comic would have to run as long again as it has already to cover the entire series. I wonder if it will manage it?

Transformers Dark of the Moon Movie Pull-Out is basically an entire issues worth of Movie puzzle pages, suggesting the switch between continuities wasn’t as planned as I’d previously suggested and they had a whole bunch of stuff from the planned fifth issue of the previous volume they didn’t want to chuck out.

This includes a Megatron & Optimus Vs Sentinel Prime Ultimate Smackdown that shows there are no issues with blowing the end of the film now; a cool Shockwave poster and Starscream’s Stumpers. Which has a spot the difference on two pictures of Skids, surely the last thing he was ever involved in. 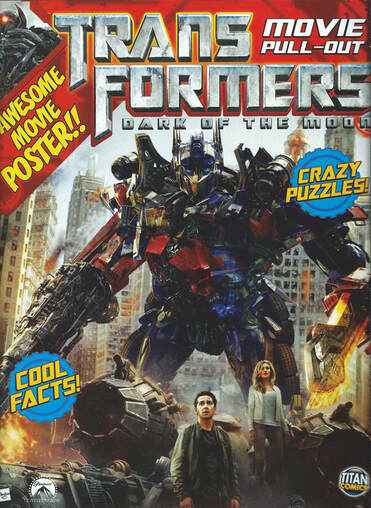 Bonus content!
Competitions (using Soundwave’s...err...Raf’s code) are for a two Transformers names combining Nerf Vortex Blaster and Kre-0 sets. Of which the Optimus Prime has over 500 pieces!

Mega-Mouth is still the name of the letters page, though Prime Megatron is joined by Arcee. Who calls him “Mega-Pants”, which raises worrying questions about what’s so mega about his pants.

Amongst some lovely art (including a piece by Jonathan Prior, 7, that sweetly calls Frenzy “Frezy”), a letter from Fletcher Adams talking about the end of Dark of the Moon causes a giant hallucination of Optimus to appear laughing “MEGATRON’S GONE SOFT! HA! HA!”, which so traumatises this Megatron he forgets he wasn’t in the film and becomes defensive about how he didn’t team up with Optimus and it was all part of his evil plan.

Next week, my evil plan is to move onto issue 2 and the return of Megatron! 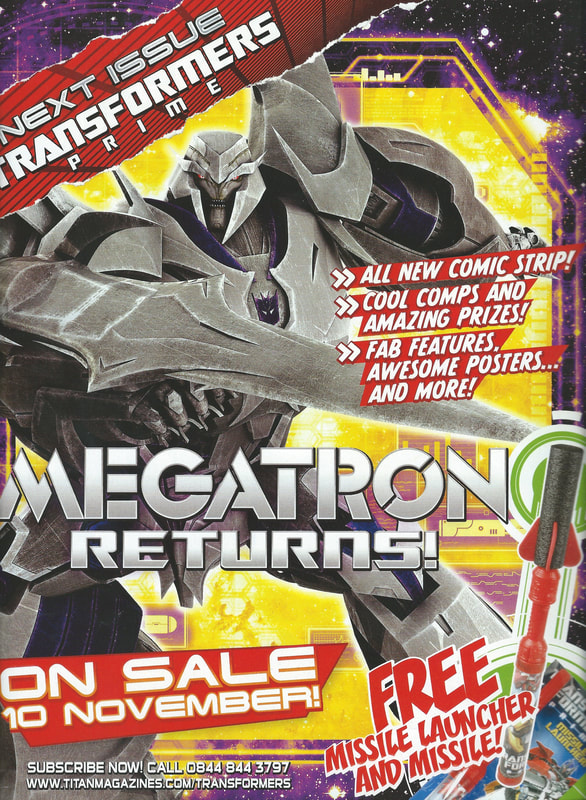