Our Freedom of Speech is Freedom or Death, We Got to Fight the Powers That Be. 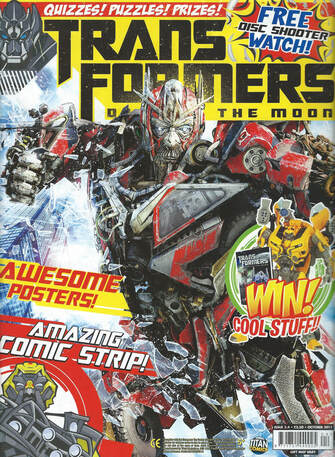 
I am the robotic apocalypse! BWAHAHAA!


We really have come around to the end of another volume quickly this time. A four issue run might on the face of it suggest more sales difficulties, but I think the explanation is more that some common sense has been applied behind the scenes.

Dark of the Moon was successful enough that a fourth film was inevitable, but with Michael Bay (for now) stepping down as director there being a degree of uncertainty over when and what form it would take. And indeed, it would be a slightly longer wait of three years, and as the Revenge of the Fallen comic struggled to make it to two, trying to keep this going for all that time was probably not an appealing prospect.

Plus, the toy-line was really in decline by this point, there were a lot less toy-only characters to exploit for the third film. Therefore, from both Hasbro and Titan’s point of view, a short run of film comics before switching focus to a comic about the new to the UK cartoon (and its toys) makes perfect sense.

Of course, there are risks we’ll talk about next week. But for now, this seems to have been a planned smooth transition (as mentioned, Etherington was cheerfully talking about the swap on his blog) rather than blind panic. 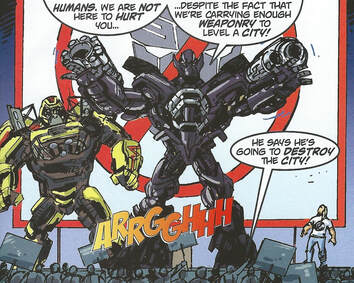 How do these misunderstanding happen?
So, with three years before we get another film comic, how does the Bay continuity exit stage left? Especially as this is the fiftieth issue (counting the three volumes as one), a traditionally big number only two previous Transformers comics have reached (and only three since)?

With a story that feels not unlike the attempted political shenanigans that Mike Costa was failing in the contemporary IDW comic. In that there’s a protest with lots of placards. At the Tech Museum of Innovation in San Jose, a crowd of humans are angry about the Transformers war reaching Earth and causing so much devastation already.

Which is a sensible reaction to just the events of the second film, God knows how they’ll respond to what’s to come.

Unlike in other attempts to do this sort of thing though, the Autobots attempts to present themselves in a good light don’t go as bad as, say, an attempted assassination on Bumblebee. 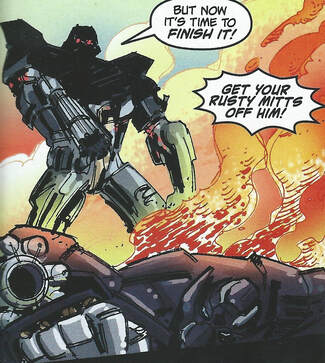 Ironhide hates de ja vu.
Ratchet and Ironhide are present and actually get to speak. Though as Ratchet only gets a sicker burn than he will in three years (“We come in peace” “Yeah? So why do we keep leaving in pieces?”), it’s hardly surprising that Ironhide showing off his guns doesn’t go any better.

Luckily, Starscream and Barricade decide to attack. Basically just to be dicks. Resulting in a hugely fun fight scene. Starscream is talking in exactly the same way as Soundwave in the last two issues with lots of BWAHAHA, but it suits his character better. And we get fun moments like Ironhide using his big guns as an impromptu rocket pack to smash Barricade into a wall and Ratchet shielding the humans from an exploding oil tanker.

Ironhide is left injured and Starscream is about to execute him... oh no, is this the end of Ironhide?!

Of course not, head protester Marcus Castor has now seen the error of his ways and leads an attack on Starscream. Which the Decepticon is unimpressed by, until Optimus Prime falls out of the sky (NEST having been called in earlier) to join in, forcing the two into retreat. 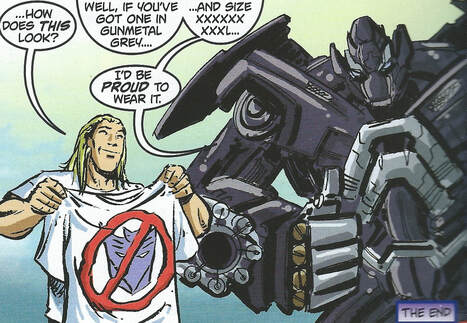 I aint afraid of no con. Which, considering the double negative, means I am afraid of cons.
Leaving Marcus to abandon his previous anti-Autobot merchandise and instead produce a Ghostbusters style Decepticon t-shirt. Which Ironhide wants if it comes in grey and size XXXXXXXXXL.

And now I’m picturing Marcus finally getting the t-shirt for Ironhide done and excitedly rushing to NEST headquarters to hand it over... five minutes after Dark of the Moon ended.

That was a lot of fun. A lot more optimistic about attempts to improve human/Transformer relations usually are and therefore actually quite refreshing. The gags are great, the action fun and the art from Dario Brizuela remains strong. As an end to this era, it’s a very well done, if low-key one.

Though the poor guy was dropped from the final cover in favour of Sentinel Prime, we do get The Lowdown... Ironhide RIP. Which feels a bit brutal, especially when it tells us “He was not, in the end, invincible”. 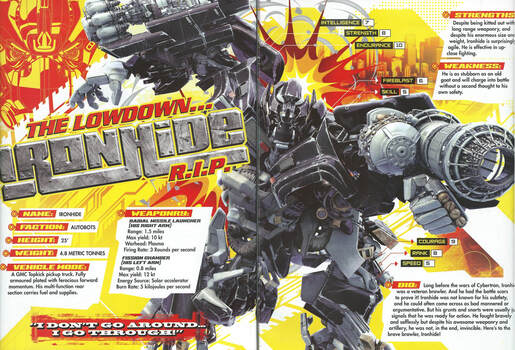 RIP
Sideswipe’s Armoury (he also gets one side of the poster—Starscream is on the other—making this pretty much the last notable thing Sideswipe ever did) is back to look at wingsuits, placing a great deal of emphasis on the film being the first time they’d been used in a city and asking you to recognise the shadows of some falling Autobots.

Ratchet is king of games this month, giving us his self-titled wordsearch and Ratchet to the Rescue!, where you have to go through a maze to rescue Bumblebee.

The competitions, again using the Soundwave code, are for more Mechtech toys, the Dark of the Moon Annual, Diary of a Wimpy Kid 2 on DVD and the 30th anniversary Dangermouse set.

Starscream’s Stumpers asks you to recognise parts of some Transformers, unscramble some anagrams and break the Soundwave code.

The final Mega-Mouth has a rather cruel response from Sideswipe to the art of Adam Mace (9, Buxton) of “This is one of these pictures that looks better the further away you are from it!” 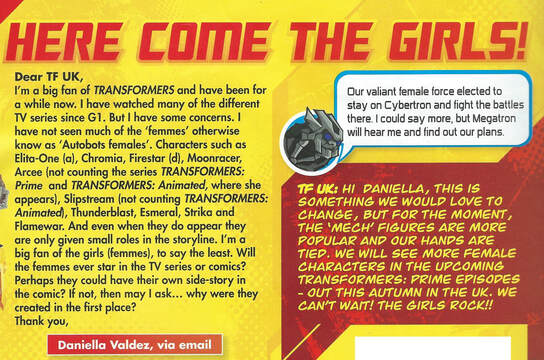 Some actual honesty for once.
The most interesting thing though is this month’s letter. From “Big fan for a while” Daniella Valdez, who asks about the small number of female characters and their minor roles. Ending my wondering why they were created in the first place if they were never going to do anything.

Whilst Sideswipe responds by saying all the women are on a secret mission on Cybertron, the comic then breaks character and “TFUK” (presumably Rona Simpson, it’s unsurprising that a female editor would give a more considered answer than we’re had on this issue previously), honestly saying that the guys are considered to sell better and the comic’s hands are tied when it comes to what characters are available. But Prime (coming in the Autumn) will have more female characters and in that show “The girls rock!!”

Next week, do the girls rock? 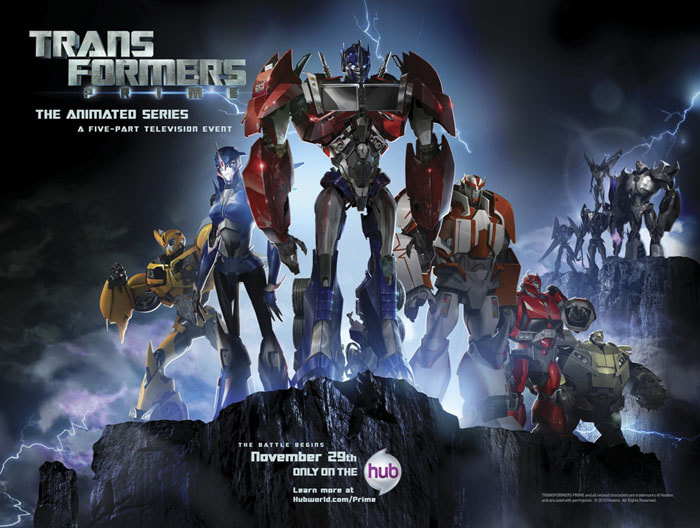