When We Finally Kiss Goodnight, How I Hate Going Out in the Storm. 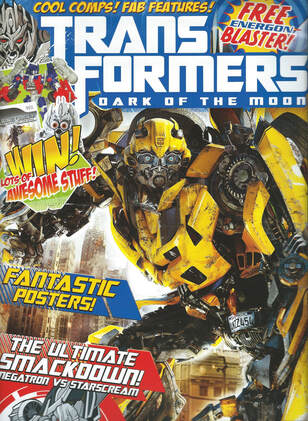 
This third issue is the first in a long time we’ve got some concrete behind the scenes information on a story.


Thanks to reader Charles Murphy for pointing it out, at the time Etherington talked on his blog (where he also mentions having started working on Prime, more in two weeks) about his motivation here: Thinking Epps resignation from NEST in the film had been kind of glossed over and wanting to explore it in more depth.

Which, as well as the obvious, also tells us that Etherington was more aware of the contents of the movie by this point. It’s not completely clear if he’d actually seen it, or was just working from the script (there’s evidence elsewhere in the comic for the former), but it’s nice to see he’s invested enough to have thought about what he’s got to work with and to find potentially interesting gaps to play with. Though notably the Mikaela/Sam break-up that is the single most obvious event in the gap between films to portray, seems to have been totally off-limits. 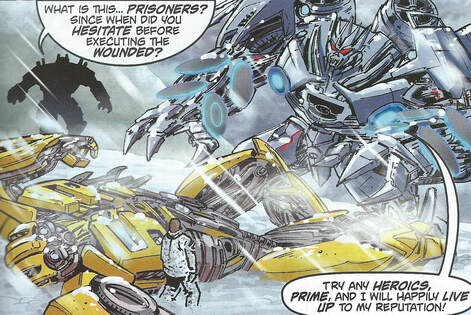 looks like he's about to kill Bumblebee with his death nipples.
Of course, the idea Epps changing jobs needs is an especially interesting thing that needs explaining (something IDW thought as well, they gave him a totally different reason for having done so) is something born out of having grown up with things like the various Star Trek shows, where people in a military style organisation are in it for life and stay in the same job at the same rank for decades without ever changing.

Whilst in reality, people often sign up for five or six years as part of a bigger plan to go do other things after (as my sister in law is currently doing), and even career military guys move around a lot, so Epps going from front line work to overseeing the Wreckers makes simple sense. Especially in a film where one subplot is about there already being a lot of retired NEST guys around the place to pick up on the way to Chicago, despite the organisation only having been going for at most four years.

But, that said, I like Epps and a more thoughtful character based story is always welcome. Though it does come in a slightly odd package that feels like Etherington either knew he couldn’t go too serious or he already had a more light-hearted story in mind where he learnt of the Epps thing and tried to mesh the two. 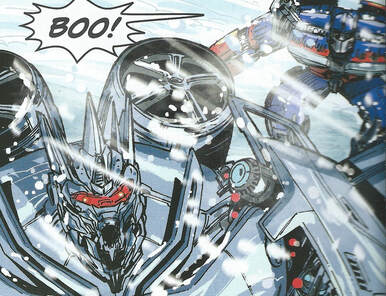 BOO
So the issue is bookended by some fairly sombre Epps narration, starting with him bemoaning being sent on a fairly unbalanced mission against a fully loaded Soundwave with just Bumblebee for backup, and ending with him depressed at how Optimus Prime is still standing whilst he is badly messed up and deciding to resign because he’s not as tough as the robots.

The six pages in-between that though are almost completely divorced from that. Soundwave (who seems to be based on the talk like a pirate version from Dinobot Hunt!, lots of “BWAHAHAHA” dialogue you can’t imagine the Frank Welker voice doing) quickly takes out Bumblebee and Epps is reduced to spectator as he calls in Optimus Prime.

So what we basically have is a romp. Soundwave wants to use the hostages to get a unilateral surrender from all the Autobots based on Earth, Prime settles for just a one on one unarmed fight... Which Soundwave is fine with as long as it’s just Prime unarmed. 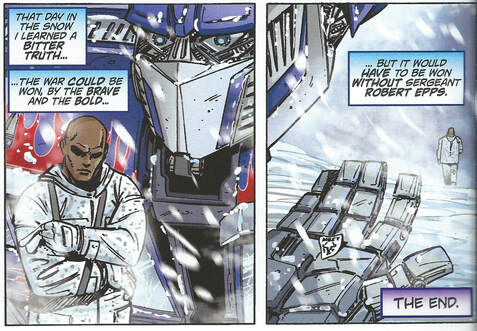 Oh yeah... that's what this one's about.
Despite this, Prime quickly works out he can use the snow covered mountainous terrain to his advantage, confusing and sneaking up on Soundwave by going “BOO!” at him like this is a school-yard game, before launching an avalanche that may or may not have killed the Decepticon (it does not kill the Decepticon), before we resume the Epps narration I’d kind of forgotten about by this point.

There’s also a moment where Optimus is surprised Soundwave has taken prisoners hesitated to kill them, which suggests that if he was working from the script, Etherington gave up before he got to the key moment where the Decepticons take prisoners and do hesitate to kill them.

Still, as an attempt to do something different in a comic that is increasingly aiming younger, it’s a noble effort and the middle section is actually a lot of fun, Soundwave is nothing like his film counterpart (oddly considering he was in the previous film as stoic minimalist guy as well, I almost wonder if this was originally written with Shockwave in mind), but is ridiculously entertaining and the more playful Prime is always welcome.

New artist Dario Brizuela (who had dome some Animated work for IDW) does some lovely stuff as well, though as with last issue he’s having car Soundwave turn into his satellite mode. So overall, I’d call this one a qualified success. 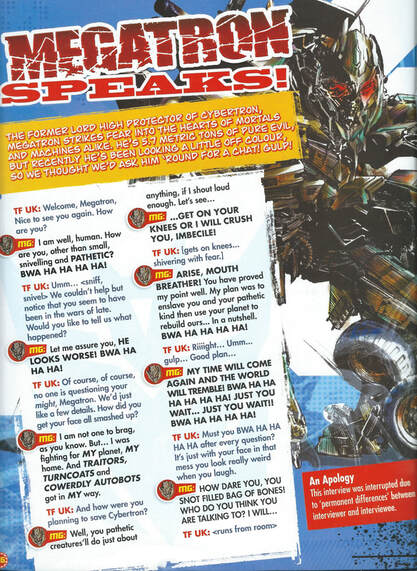 Amazed Titan keep finding people to do these interviews.
As a sign of why the third volume is going to be short one, they’ve already run out of new characters with enough to them to do profiles on, and so instead we get return of the Vs feature in Megatron V Starscream Ultimate Smackdown, that oddly doesn’t mention Starscream’s eye as his main weakness.

Bumblebee’s Guide to the Galaxy: The Space Bridge (Cybertronian) looks at the McGuffin of the film, and I’m certainly glad that it clarified it’s about the Cybertronian Space Bridge rather than the Croydon version. It also shows the Michael Bay Misinformation Campaign has served its purpose and the comic now openly talks about Sentinel Prime being a villain. Which is ironic as he’s the centrepiece of the poster this month.

Competitions are based around decoding messages written in the Soundwave code that’s once again in the editorial. Prizes are Mechtech and Eggbod toys; Dark of the Moon on the Wii (again) and Yu-Gi-Oh! Bonds Beyond Time on DVD.

Search for Barricade (my favourite Star Trek film) asks you to find the hidden Decepticon in a 3D map so elaborate I suspect it’s been nicked from somewhere else.

Megatron Speaks! is, amazingly, the first bit of fiction presented by the comic to be set after the film, as the Decepticon gets annoyed about questions over his smashed head and failed plan to enslave humanity before killing the interviewer.

Now, of course, Megatron did get better in the end, and it might be reading too much into a silly comedy feature, but it does feel like at this point the comic may only have had access to the script where Megatron went off alive at the end.

It’s accompanied by another How to Draw... copy a picture into a grid feature on Megatron in chains. 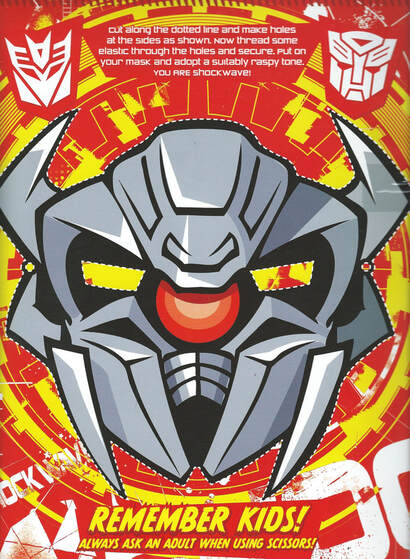 Shockwave nose where it's at.
Starscream’s Stumpers has a spot the difference on Bumblebee, stick the cut up picture of Megatron together and crack the code games.

Mega-Mouth has our first letter from an older reader (older meaning 16) for a while, from Megan Coles. Who is nicknamed Zeta (as in Zeta Prime, though it’s also her middle name) and Megatron by her friends. Which deeply pleases Megatron and means she gets sensible answers to her questions. Though I’m not sure who this “Mirage” and “Wheeljack” everyone is talking about are.

The cover is oversized again, for some cut out badges and a Dark of the Moon wordsearch. Though it’s the cut out Shockwave mask that makes him look like Rudolph the Red Nose Reindeer that really stands out.

As does a Next Issue page that seems very in denial about Ironhide, claiming he “Fights another day!”. I wonder if he will? 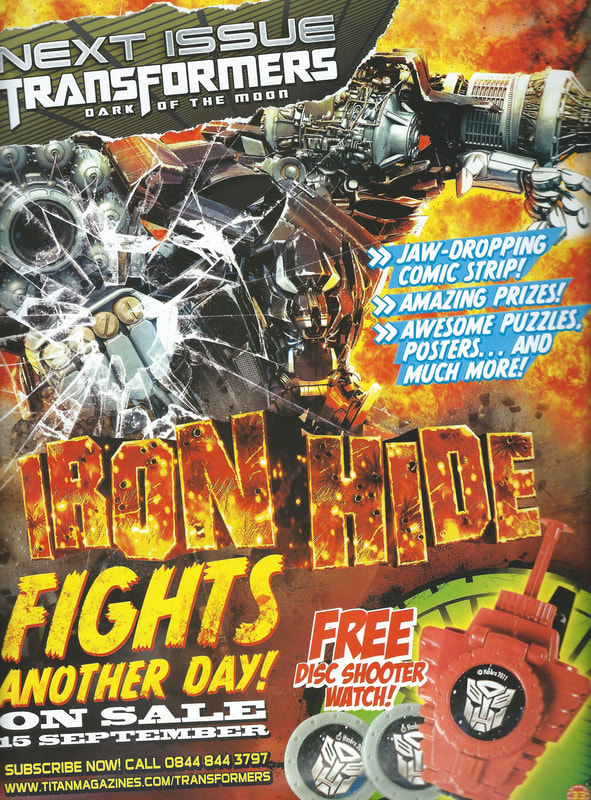