Always Believe in Your Soul. 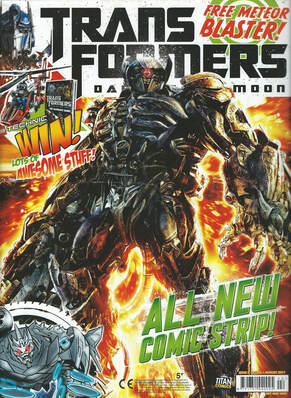 
Perhaps... but then again, maybe my imagination is a little bigger than yours!


That’s certainly a dramatic and exciting picture of Shockwave on the cover. Which has nothing to do with the contents of the comic this month. Indeed, the absence of large and expensive toy Shockwave from the strips is going to be fairly conspicuous, to the point I wonder if it’s a result of the MBMC.

Inside though, despite now being close to a month from the release of the film, the comic by the same creative team as last issue is not only still a prequel, but feels like it has escaped from the last volume of the comic. The first issue saw Etherington play with a more Furman writing style and at least foreshadow elements of the movie (though in a way mainly about the misdirection), with this issue I suspect we have a filler script from volume 2 pressed into service with no changes. Only Soundwave being in his car body means it wasn’t drawn earlier as well.

So, in keeping with the author who took us to the Bermuda Triangle, this month the Transformers are after El Dorado. As the sinister Tanto Gang led by Mr. Kubikiri, have been hired by Mr. Wave (who talks abut humans as if he isn’t one, odd that) to use explosives to unearth the sunken city of gold in Columbia.

Once they’ve done the hard work, including bringing a massive crate ashore, “Mr. Wave” turns out to be... Soundwave! Who, to be fair, isn’t the Wave you were expecting from the cover. He was hiding in the crate, and bursts out and prepares to smash the gang that he has hired for no real explicable reason. 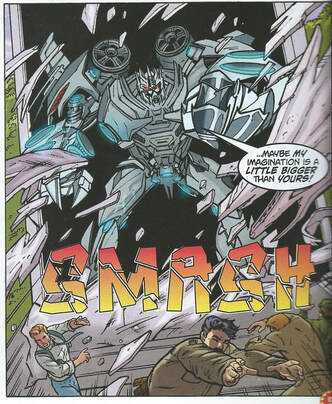 He really does have an insane imagination.
Luckily, the Autobots are on to him and Lennox (who hilariously had his identity hidden from the reader with a headscarf even though he looks nothing like the Josh Duhamel. And needs a shave) has infiltrated the group and calls in Autobot support.

Which gives us the best part of the issue as Autobot fall out of the sky from the air transport, with Soundwave mocking Ratchet for being a mere medical officer, before Ratchet responds the guy is going to need a doctor soon as Optimus lands on his head.

Things take a turn for the odd as Soundwave explains his plan to a baffled Optimus. I’d assumed that this was a case of another all powerful Cybertronian artefact buried under an ancient Earth monument, but instead it turns out Soundwave wants the gold. To use to flood the Earth’s stock markets and wreck the economy.

Which is a strange plan for a guy currently working with the rich and powerful of Earth to achieve his ultimate goal. Not to mention that the role he filled in the second film (which this script was clearly written with in mind, there’s a moment Domingues has to fudge what is clearly supposed to be Soundwave turning into satellite mode to fly off) he could have just hacked the banking computers. 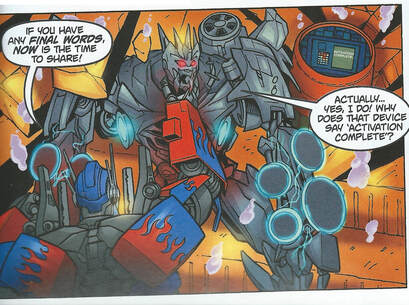 Soundwave is da bomb.
Luckily Kubikiri decides to spare us from this continuity nightmare by (overly dramatically with a “No one double-crosses the Tanto gang”) detonating a second bomb in the City. With a nice comedy beat of Prime asking Soundwave if he has any last words and gets “Actually...yes I do! Why does that device say ‘Activation complete’?” before everything explodes.

Which ends the issue on something of a downer, El Dorado has been destroyed, the Tanto Gang have escaped to return another day (which is given odd prominence as they’ll never be seen again. Did Etherington have plans?) and Soundwave is away on his toes as well.

But Prime assures Ratchet that they might have only achieved a little, but a little can be worth it’s weight in gold.

This is an odd one. There’s certainly some of the light and breezy fun of Etherington’s best stuff, but it doesn’t fit well with when it’s set and Soundwave’s plan is nonsense. The art at least is stronger than the first issue and there are some good gags though.

The cover justifies itself by giving us The Lowdown... Shockwave. Which is taken from his Hasbro.com profile and therefore keeps up the MBMC, talking about him as the greatest rival to Megatron, imprisoned beneath Chernobyl. 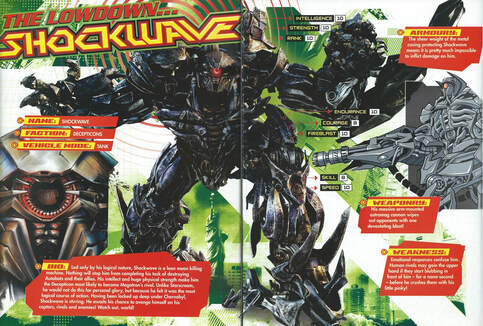 Feel the big dick energy.
The V-22 Osprey The Real Transformer is a bold claim for a quick overview of the air transport used to get Lennox to Chicago.

Competitions this month are for “Awesome Transformers books!” (the ultimate guide, junior novelisation, activity and colouring books for the film) and “Amazing Lego Technic toys!”

The poster (which the editorial promises the reader will treasure) is the UK theatrical poster, complete with the original release date of July 1st before it was pulled forward.

Ratchet’s Joke Page is as hilarious as that sounds, with rib-ticklers like “Doctor Doctor! I feel like a deck of cards!”, “Well sit down and I’ll deal with you later!”. The gag about Soundwave needing a doctor in the main comic is funnier.

There’s two games this month. The first, Hunt the Ark! has you help Ironhide track a piece of the ship in the Brazilian rainforest. The second, Crater Jump Game has Megatron and Prime fighting whilst jumping over lava filled craters on the moon.

Starscream’s Stumpers is the usual puzzles: Spot the difference on two pictures of Barricade, identify the different body parts of various Autobots and crack the same Soundwave code as issue 1 (reprinted on the editorial). 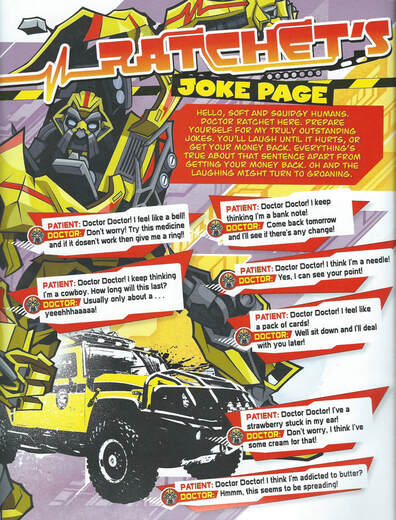 This is why Fraiser had him killed.
The amazing thing on Mega-Mouth is a drawing by James Morgan (8, Usk) of Megatron and Optimus... well, Megatron insists they’re fighting rather than dancing. But frankly it looks like he’s really having a very happy time behind Prime.

Leith Hancock (8, Stone) says they’re a huge fan and proves it by asking questions about where Ransack and Stockade were in the film. The hosts can’t provide much information on Ransack, but they do confirm and are both happy to say Stockade is still trapped on Cybertron.

So I guess he ran into bad luck in the regular timeline as well. At least he got to come back to Earth during the third film.

Next week... the ultimate smackdown!


DARK OF THE MOON 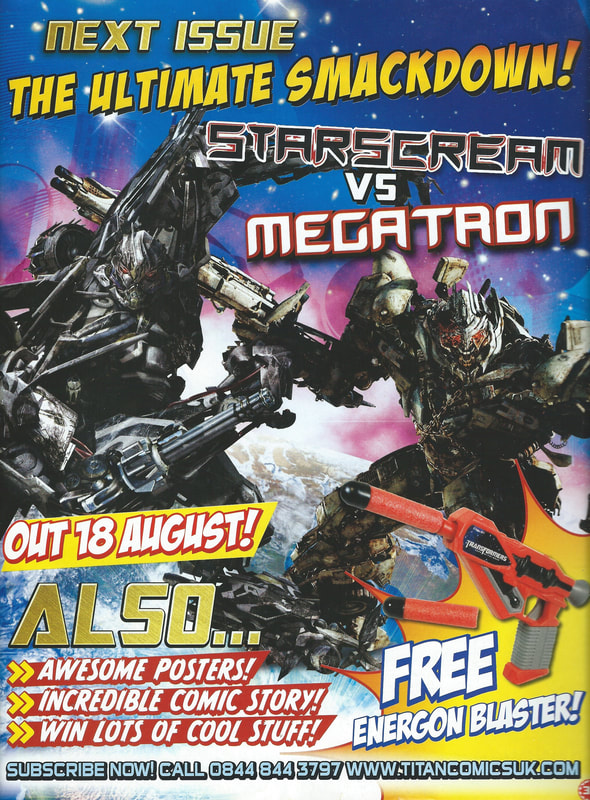