You Can Ring My Bell. 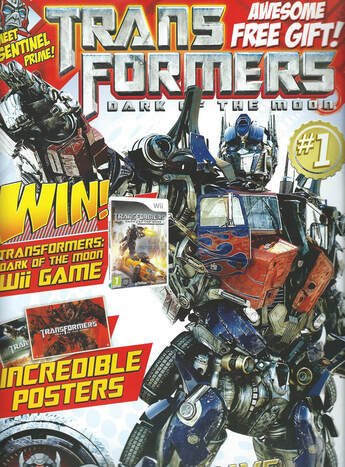 
The only reason you managed to get this far is because your one effective weapon is the sucker punch!


*The contents page calls it “The” Fight for Fiesole, but this is how the strip has it.


First, some quick housekeeping. Despite my best efforts, work and disrupted sleep patterns means I haven’t had chance to rewatch Dark of the Moon. So as this issue was released before the movie, I’ll cover it next week instead.

Or, remembering what work can be like as Christmas approaches, definitely for New Year.

This is also another issue with an extra big cover (to accommodate the cut out bookmark) that doesn’t fit in my scanner, so the image is missing the claim that “Shockwave speaks!”

The comic itself sees Robin Etherington take over as the lead writer. Something that might not be immediately apparent here as he seems to be channelling Furman’s more flowery writing to a greater extent than he did on his filler strips. There’s also a similar effort to use real and probably unknown to the kid reader locations.

The MBMC in action.
So our first prequel to the third film opens in Fiesole, Italy at the cathedral. Where we’re given a big speech block of narration about martyrs. Both in relation to the local Saint Romulus (patron saint of big 80’s shoulder pads and pointy ears) and generally as if it’s trying to sell some sort of subtext.

Somehow successfully sneaking past the NEST guards is Starscream, on the radio to Soundwave about how he has to retrieve a damaged section of the Ark before the Autobots can use it to find Sentinel Prime.

Now, one of the big things that happened in the lead up to the release of the third film was a fuss being made about Michael Bay’s Misinformation Campaign, designed to stop spoilers getting out. Something that was completely mocked by fans for being really stupid and never going to fool anyone.

Up until the film actually came out and it turned out the MBMC had in fact completely fooled everyone, up to and including IDW. Which may have been what finally soured the relationship between them and Paramount, meaning there wouldn’t be any more American Bay comics until the truly terrible Bumblebee one that was also clearly made by people being denied any useful information about the movie.

The misdirection was mostly based around hiding the fact that Sentinel Prime was the villain, so this particular bit of plot doesn’t make any sense in the context of the film where the Decepticons actively want the Autobots to find and release Sentinel. Considering Paramount were generally pretty contemptuous of the spin-offs that made them a couple of tenners compared to the billion dollars of the film, I suspect Etherington was acting in good faith based on the information he’s been given rather than being in on the MBMC. 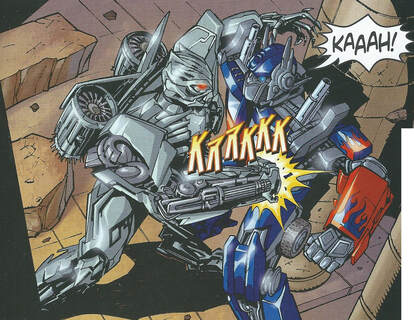 Kiss me you fool.
A more minor example is, as they bicker and he disables the cathedral’s security cameras remotely, that Soundwave firmly says he's still in orbit flying about in space as he was in the second film as opposed to his more grounded role as part of the Great Big Conspiracy in the third.

In the cathedral, an archaeologist who gets more page time than he needs, explains that he’s found a diary from the 60’s that talks about an “Object that fell from the sky” in ’62 (which, if memory serves contradicts how long the Ark is supposed to have been on the moon in the final film) that has led him to digging it up.

But this is where the fun kicks off, as Starscream attacks. Easily taking out Sideswipe (guess he’s not that good) and mocks Bumblebee for being a grunt before doing the same. It’s great fun and a final appearance for the competent and deadly Starscream of the first film before he goes full Latta in Dark of the Moon.

There’s also some great snark to snark between Prime (who has a surprisingly firm ass) and Starscream as they then go one on one, with Optimus mocking Screamer’s love of sneak attacks and the Decepticon snarling “TIME TO DIIIIIE!” as he pounces. 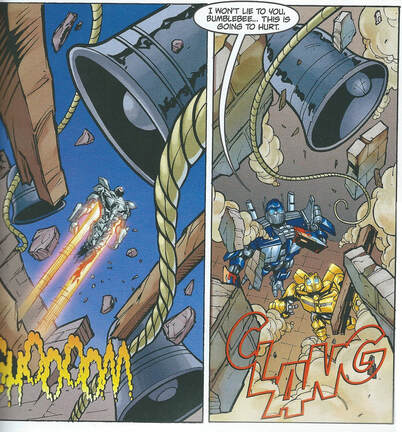 The bells... the bells.
Things do attempt to get more serious and therefore less fun as Starscream starts prattling on about self-sacrifice and destiny. Which is presumably supposed to tie-into the opening spiel about martyrs and doesn’t really work as set-up as Prime actually gets out of the next film without having to die.

Things end on a lovely comedy beat though, as Starscream sends the cathedral bells crashing down onto Prime and the just recovered Bumblebee. With Prime dead-panning “I won’t lie to you Bumblebee... this is going to hurt”.

Which lets Starscream then destroy the bit of Ark, and leaves Prime musing that the Decepticons clearly have a secret and the Autobots will do what they can, even if they’re working in the dark.

Prime is standing in front of a full moon as he says this. Lol.

The issue ends on the promise that the story continues in the film (in cinemas 29 June!), which suggests that this was intended to be the only prequel at the point this was written, though that won’t be the case.

This is the most low key of the three first issues we’ve had from Titan so far, not setting up any sort of ongoing plot. Whether that’s because it was just supposed to be one prequel or with the book’s future now uncertain meaning more self-contained stories, I’m not sure. But it’s still a solid start that becomes quite fun once Etherington gets over the attempts to be Furman and settles into his more lighter natural style.

New artist Horacio Domingues makes a solid debut, being stronger on the characters with more reference material. So Bee and Prime look great, whilst Sideswipe has an odd exaggerated head crest that make him look like that spitting dinosaur. 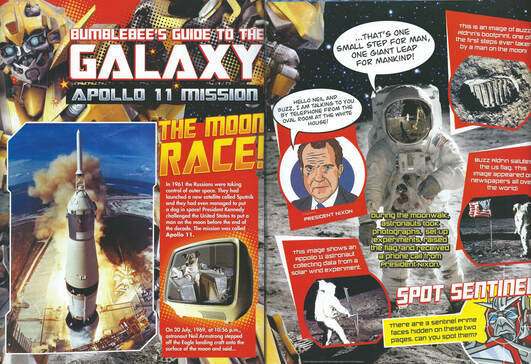 Nixon was in Doctor Who this year as well. Busy guy.
Speaking of new talent, the editorial credits reveal that Steve White has been kicked upstairs to “Senior Editor”, and has been replaced by letterer on the comic Rona Simpson. Assuming White’s role is just supervisory, that makes this the first Titan issue, indeed the first issue since the comics came back, to not have anyone from the Marvel days working directly on it. The editorial also includes Soundwave’s codebreaker to use on the puzzle pages.

The Lowdown... Sentinel Prime is a quick guide to the character, including various details from the Aligned continuity that never made it into the films (“Megatronus Prime” as the betrayer of the original Primes rather than just the Fallen) and very keen to promote him as a hero.

Bumblebee’s Guide to the Galaxy shows that the solar system is no longer enough for the Autobot. Though he still starts local, giving two pages over to a brief history of Apollo 11, the second most famous thing Dark of the Moon actor Buzz Aldrin did.

Competitions are for the Dark of the Moon game on the Wii (with the description making it clear it was part of the MBMC, talking about the ultimate evil, Shockwave) and Mechtech toys.

The poster has the cover image of Prime against a new and very Independence Day feeling shot of the moon over the Earth background on one side, and a seemingly in hell Megatron on the other.

Break Out of NEST is a maze you have to get through to rescue Ratchet from some escaped Decepticon prisoners.

Shockwave Speaks! continues the faux interview format (despite the new editor, this is basically the same comic as before), and perhaps surprisingly has him as a block capital letters speaking emotionless type rather than the mastermind the MBMC would otherwise have you believe. He does quote his G1 motto and kills the interviewer at the end though. 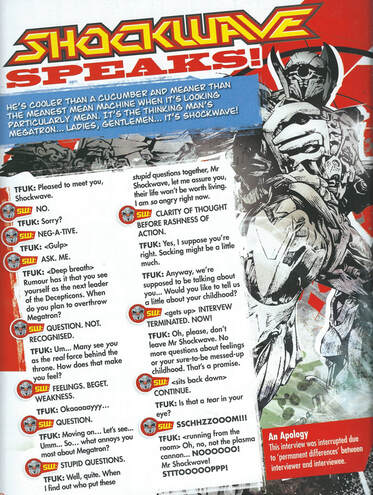 I don't know how they keep finding people to do these interviews.
This is opposite How to Draw Shockwave, the same grid copy thing as seen in the last few issues.

Our new letters page, Mega-Mouth replaces Barricade and Ironhide with Megatron and Sideswipe. With Megatron wanting “The meanest Decepticon pictures in the history of the Universe. I DEMAND IT! ELSE YOU SHALL FEEL MY WRATH!”

Amidst the letter from Ryuto Yamagata (10, Cairo Egypt) that comes with a drawing of Devastator stomping on Optimus that Megatron loves and a drawing of Ninjatron by William Justin Lymath (age 3 1/2, with help from dad) that’s clearly Bludgeon meets Darth Vader, one thing really stands out.

And that’s the moment where the original character of Syclock by Fletcher Adams (8, Wortley) that gets called Sycock at one point.

I am 8 years old myself.

Starscream’s Stumpers is in the same spirit as Megatron’s Mind Maulers, with spot the differences, cracking the code, mixed up bots and Trans-Doku. Starscream is pleasingly bitchy though, get 0-5 points and you're a “Piddling pea-brain”.

The back of the extended cover is then work out which bits of Sentinel Prime have been cut out of which parts of the picture of him. 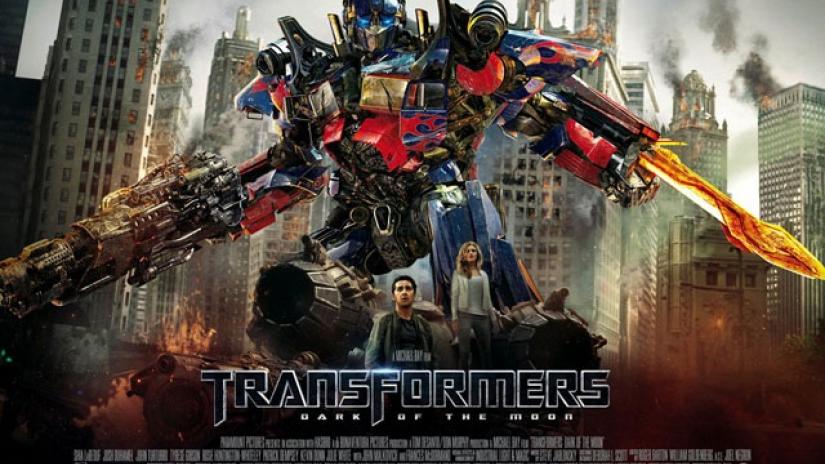