Smack My Bitch Up. 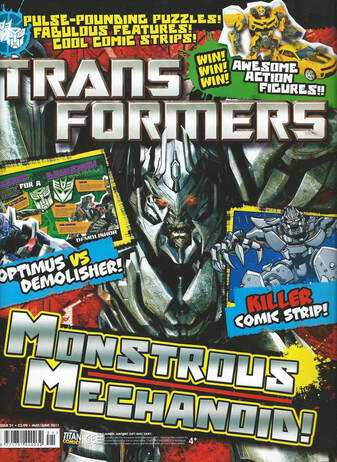 
In my absence, those who once feared and revered me have grown arrogant and bold, challenging the simple truth that the one true master of evil is Megaron.


We’ve now really reached the end of the book’s imperial phase as the second volume closes out. Despite the increased success of the next two films, the downward curve we’ve been on for a while really kicks in from here. But that’s a pretty good run, four years on the original comic takes us to late 1988, or just before the same point where the real cuts and increasingly desperate measures to keep things going started.

This is also the last time I’ll be talking about Simon Furman, as from volume 3 Robin Etherington will be the main writer on the series. That’s a run of 26 years where he has been the core writer of the UK stories. He did carry on with the US IDW stuff (ReGeneration One of course. And more recently a one off “Issue Zero” to the Marvel series), but for our purposes this is the end of the road (tm) for a writer that, though increasingly unpopular with younger fans (usually rightly considering things like Spotlight: Arcee) has been the bedrock of British Transformers comics and this project.

And I suspect he knew this would be his last considering his indulgence in calling it after a Furmanism. Though considering it involves a traitor to the Autobots he could have gone for The Enemy Within and brought us full (savage) circle. Considering he’s a jobbing freelancer who pretty much takes every Transformers gig he can, I suspect this is another sign of the budget cuts kicking in. Newer, cheaper authors are the order of the day. 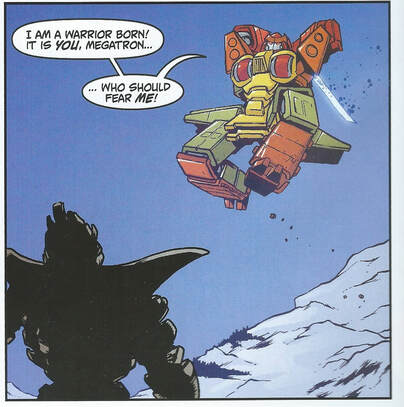 This will end well.
Now, my memory of this story from close to 9 years ago, is that it was a successful all action climax to the Bludgeon storyline, taking heavy inspiration from the Tales of Earth story from Generation 2 where Megatron returned to take out the usurper Bludgeon.

Reading it now, it’s kind of underwhelming. Much like that original Bludgeon/Megatron fight come to think of it. Starting with a typo that turns the Decepticon leader into Megaron (everyone’s favourite Eastenders background character). Largely because it feels as if Davis-Hunt has had to rush the art. All the character models are much simpler than usual, as are the layouts, with lots of big perfectly square panels. And Megatron especially looks terrible, a vague grey mess with teeth.

That means the fight that should be the centrepiece of the issue, is just sort of there. Though it does end with a pleasingly big explosion as Megatron (with head visible in tank mode as per his profile two issues ago. As per other spin-off material Furman wrote around the second film, Megatron can switch between his 07 and 09 alternate modes) kills Bludgeon.

Though it is preceded by a line saying he’s not going to kill his rival. Which is I suspect one of two places the script was changed in the increased gap between this being written and published to placate Hasbro.

But who will stand up for Slapdash? 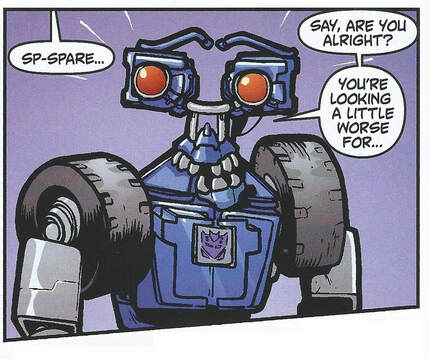 Famous last words (intended).
Prime and Megatron then face off for, as a * note reminds us, the first time since Revenge of the Fallen two years earlier... with Megatron just flying off and Prime saying he’ll be waiting like a guy hoping his boyfriend will come back soon.

Which means, as before he arrived Bludgeon was well on the way to killing all the Autobots, that Megatron has snatched defeat from the jaws of victory here. Or at best a no-score draw. No wonder he’ll become incredibly depressed immediately after this.

The shift between this confident Billy Big Boy Megatron and the guy sulking in the desert and at a loss over what to do with his life at the start of the next film is actually more of a continuity issue than the Wheelie thing I’ve still to come to.

So the first of two other things to note is another influence apart from Generation 2, that of the end of his opening IDW arc, Infiltration. Where Megatron returns to take on a usurper and that guy’s own Decepticon troops refuse to join in (as with the recovered Tankor and Lockdown here) and the Autobots make the choice to just stand and watch from the side-lines, with a threat from Megatron at the end that things are about to get serious now everything is sorted.

The other is Wheelie. Where any ambiguity over whether he’s pulling off a triple-bluff removed as he talks to himself about how great it is that Megatron’s back and he’s now a Decepticon again.

Which leads us into the best part of the issue, as he runs into the turned back into a zombie by being shot Dead End and is briefly concerned about how bad the poor guy looks... before being ripped apart for “Spare Parts”.

Hurry back soon, love.
Which would be an appropriately ironic way for the traitor to die. But clearly by the time this finally saw print, Titan knew he was going to be in the third film, so there’s some awkwardly changed dialogue where Prime and Bumblebee find his body and have it sent to Ratchet to see what he can do. With it firmly established no one knew what the little twerp had done.

Meaning Wheelie can go from being a conflicted traitor who made a choice that got several Autobots killed to the lovable comedy scamp once again.

Dead End then actually gets the final moment of the volume, of Davis-Hunt’s art and Furman’s UK writing, following Bumblebee as he heads off, still wanting SPARE PARTS. Which is fair enough as he was one of the breakout characters of this run.

Despite the consistency of the same writer and artist across all 21 issues and two years, this has been a more awkward run than the first volume. Most obviously because of the initial overdose of the Twins, but even the post-film stories have not had the same sense of focus the alternate timeline managed, even in just the Furman stories. Something you can tell by the fact that Jolt, the guy presented as the lead character since the move away from prequels, hasn’t been seen in seven issues. And I wouldn’t have noticed if one of the bonus features this month hadn’t mentioned him.

But, certainly by the standards of contemporary UK tie-in comics, it continued to hold its head up high and still had plenty of nice moments. Including from the departing Davis-Hunt, despite him not ending on a great note.

The important thing going forward is that Etherington has shown himself to have a good handle on the lighter one-off stories we’ll be getting almost exclusively from now on. 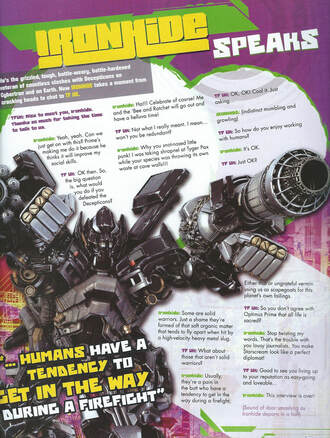 I love Ironhide. I hope nothing ever happens to him.
Extras this month include the final in our interview series, this time with Ironhide. Who is the psychopath we all know and love, getting annoyed at the implication he doesn’t share Prime’s regard for life and only just stopping short of killing the journalist.

Bumblebee’s Guide to the Solar System concludes with a two page spread as it desperately tries to fit the rest of the solar system into the last issue. The focus here being on moons that could just have easily been mentioned in the pages on their respective planets.

Weapons Free! is a spot the differences between two pictures of that moon loving Bumblebee.

The competitions are about helping Hasbro clear out Revenge of the Fallen stock, with Cyber Ops Bumblebee and various Legends toys up for grabs.

The poster, which isn’t double sided and means sacrificing a page of the comic if you put it up, is a nice counter to the cover, being of Prime standing triumphantly.

How to Draw Optimus Prime is basically the same feature as two issues ago, but with Movie instead of G1 Prime in the grid.

Megatron’s Mind Maulers has another spot the difference (Ratchet this time); a scrambling of characters and ten Decepticon logos hidden around the page. 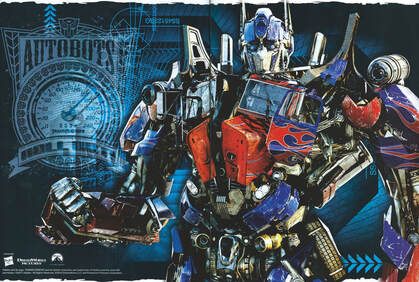 I think that might actually be a Dark of the Moon Prime?
Cruising For a Bruising is a slightly arbitrary two page spread, that I suspect was meant to be the back of the poster, setting Jetfire corpse wearing Prime against Demolisher with various facts about the two that mainly served to remind me of Jolt.

The final ever Law and Disorder doesn’t really end on much of a climax for the book, but is, surprisingly considering how hard it was pushed in earlier issues, the first place the title Dark of the Moon is mentioned.

We do at least conclude with Time, age 10, sending in his own character Fire Round, who is so heavily armed it scares Barricade and awes Ironhide. Just a shame the sexual tension between the two hosts will never be resolved.

Next week, it’s a new volume and back to monthly releases. But first we’ll be off to the movies for the third time... 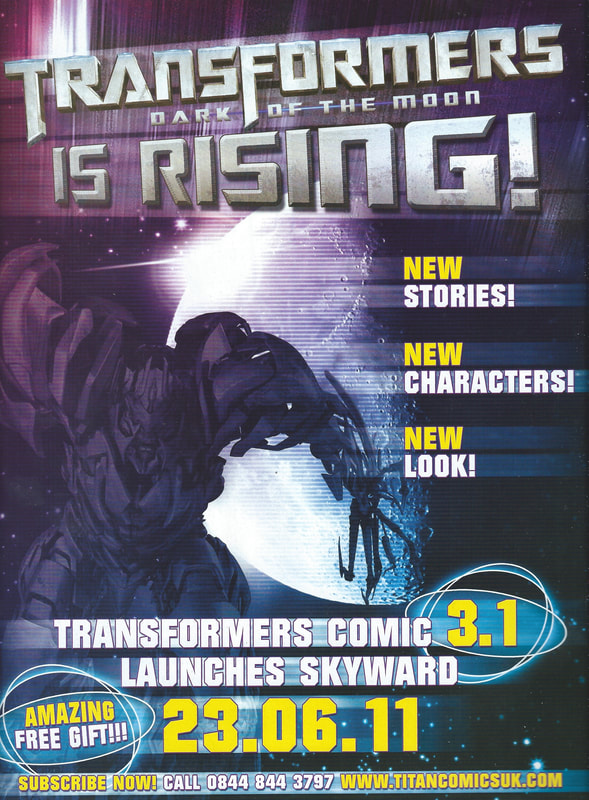