And Now I Know How Joan of Arc Felt. 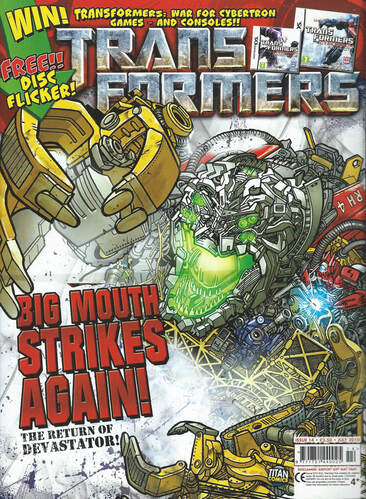 
The cover has to be pretty unique this month, a Transformers comic quoting a Smiths song with no involvement from James Roberts anywhere within. Though, having felt dirty and looked up the lyrics to Big Mouth Strikes Again, I don’t want to hear anyone insisting Morrissey was a lyrical genius before he went full on loony racist ever again.

The cover seems to promise us something we’ve not had before in a regular timeline comic: The resurrection of a character (singular, no individual Constructicons appear, but of course, the toy only broke down into vehicles, not robots) killed in one of the films. Which, considering the requirement to promote the toys, is something of a surprise.

In practice what we get is more akin to the zombies Starscream used in issue 7 of the original run. Or rather more like an even older and more unlikely issue.

Something signposted by us opening in British Columbia, with Canada being the home to so many Earthforce stories. Where, keeping up the theme of these issues featuring toyline only guys, Stratosphere is doing a routine patrol (for what? Everyone seems to find it surprising that there’s Deceptions in the mountains), and crashes straight into Devastator’s claw. 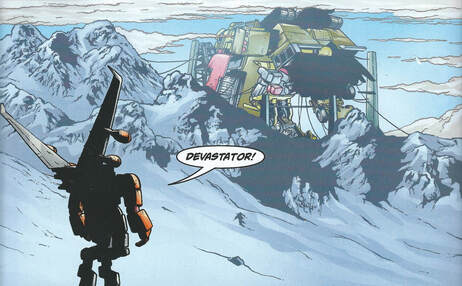 They've not been able to find his balls.
At the real CFB Comox base, NEST Captain Fraser insists that the flying Autobot is doomed, but Jolt and his pals insist on going to find him anyway.

Which is fair enough, Autobots can fly in space, so I don’t think the cold of a Canadian summer is as dangerous to him as Fraser claims.

And Stratosphere has indeed survived, and despite the cover and art on the first page trying to make it look like a deliberate attack, he really did just fly into Devastator’s arm. Yes, it was under cloud cover, but someone should introduce him to the idea of radar.

A Mysterious Villain (and it’s vague who, more on that in a minute) is trying to glue the blown up bits of the combiner back together. Yes, just like in Desert Island Risks! from the original comic.

The damaged Stratosphere isn’t as effective a fighter on the ground as the air, and he's up against the one Decepticon there as guard (I don’t think he’s behind this plot) Skywarp, who is incredibly gleeful about what an amazing airborne fighter he is himself.

Which seems to be a boast too far though, as Stratosphere not only successfully logs into the Decepticon SPACE Wi-Fi to call in a NEST air-strike via their own satellite dish, but easily distracts Skywarp into crashing into a mountain (where it’s unclear if he is captured or escaped, handy for both his subsequent appearances and issue re-ordering). 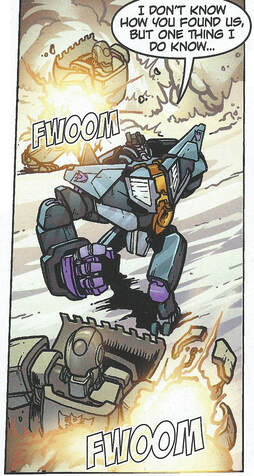 Buffwarp.
Then Jolt’s Jumpers (as I’m now calling them) arrive... only to be told to leg it as NEST arrive and bomb Devastator to hell. Though no one is that keen to go into the burning smoke of the aftermath to make sure.

Some mysteries about the behind the scenes stuff on this series are hard to pin down. But this is fairly clearly the strip that was moved to allow last issue’s footy tie-in to be an issue early, fitting into the “Battle with toys that (allowing that Skywarp’ll wind up one of Bludgeon’s men) end with a guy being captured to then escape in the World Cup story” arc.

I think it probably works a little better here though, beforehand issue 13 there’s no one active enough in the Deception leadership to undertake such a big thing as trying to revive Devastator, placed here you can assume this is all part of Bludgeon’s plan to build his army.

Which is probably the most interesting part of an otherwise entirely forgettable issue that wastes the promise of the return of one of the film’s most memorable visuals. Whilst it’s nice to have a Jolt appearance that doesn’t end with him just electrocuting things, the Jumpers are entirely superfluous and blatant padding. All they do is drive up a mountain and then drive back.

Equally, despite all the talk of Stratosphere being vulnerable whilst grounded, nothing here actually gives him any trouble. And Davis-Hunt seems to struggle drawing him, one page dramatically ends with a big close up on his feet for no readily apparent reason.

All in all, a somewhat disappointing failure that I would say continues the trend of combiners not really working in the static medium of comics, if not for the fact that Devastator might as well have been a big sign saying “McGuffin” for all the presence he has in the story. The cover mounted free disc flicker was probably the most exciting thing about the issue this month. 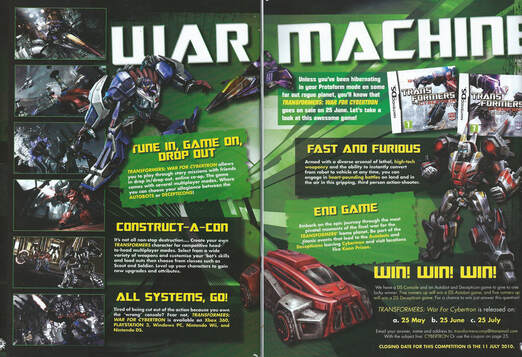 I'm just a war machine.
This Time It’s War! screams the editorial, as it talks about the War For Cybertron preview and competitions, without mentioning the comic once. Which is never a good sign.

Said competitions include Movie Leader class Transformers toys; Star Wars Lego and a host of computer games: Prince of Persia: The Forgotten Sands for the PS3; Split Second and Pure Football, both for the Xbox 360.

Now, you may be thinking that clearly the unmarked brown envelope full of money from Nintendo has stopped coming, but it seems one that got lost in the post arrived just in time for the two page feature on War For Cybertron to mention the other formats it’s on, but to only have a picture of the packaging of the DS version (even though I’d say the screen-grabs are from a more advanced system) alongside a competition for it.

The feature itself is just a straightforward description of the gameplay and goals of the game.

Megatron’s Mind Maulers is quite a fun quiz double spread where the Decepticon admits he’s made it easy as human “Primitive nervous systems can’t deal with high level logic problems”. Amidst games like Words of Power (work out the anagrams); Spycatcher (spot all the Bumblebees hidden on the page) and Re-fit and Re-Purpose (name the character who owns the weapon Megatron has stolen), it’s the “Who’s head is this?” game that stands out, being called Decap Attack. Someone was a Sonic the Comic reader.

Bumblebee’s Guide to the Solar System reaches Venus and, other than a joke at the British weather and the reveal the atmospheric pressure there would crush Cybertronians, is clearly a cut’n’paste job from the Junior Encyclopaedia of Space. 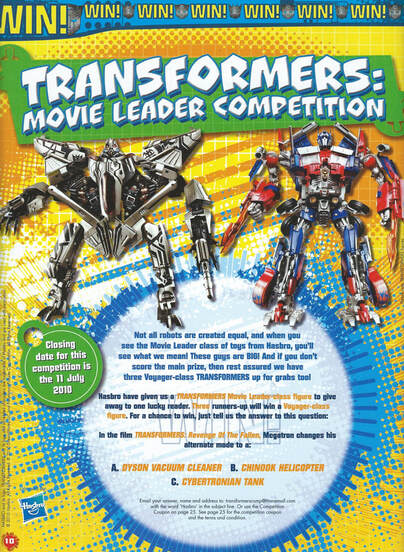 Leader of the pack.
Out of This World contains both a wordsearch and a maze and, like the World Cup quiz last issue, is inexplicably adorned with G1 art. Including what I believe is the same thrusting Prime. Have the run out of Revenge of the Fallen stock photos already?

Law and Disorder opens with Barricade and Ironhide at the getting a house together stage of the relationship, discussing with mutual enthusiasm paving over a tiny part of the planet to build a little Cybertron.

The difference of opinion comes down to Ironhide wanting to take over the Isle of Man and Barricade North America.

The letters themselves are a pretty similar mixture of what we’ve seen recently. Excuses to mention the third film, excuses to mention War for Cybertron, and an absolute insistence to James Foster, age 11 from Shrewton, that neither Unicron or Galvatron will ever appear in the films.

More interesting is the eclectic art. Including an Animated Blitzwing by Matti Evans of Devon; G1 Hot Rod (by the aforementioned Mr Foster) and Soundwave (by Lewis Diver); an Animated Bumblebee by Aiden Webb, age 5, from Stoke-on-Trent and a completely cocaine fuelled smiley blue Optimus Prime with pipe-cleaner arms by Freddie Turner, age 6, from Brentwood.

Most shockingly of all though, and I honestly can’t remember if this is a permanent departure or not (though it would make sense that last issue’s narrative acted as a climax to the feature), there’s no Starscream’s Stars! Instead we get a 100% authentic photo of Scooby Doo reading issue 10 (again, giving an idea of the lead-in time) when he was dining out at Planet Hollywood.

Which isn’t the same really.

Next week... Soundwave, where are you? 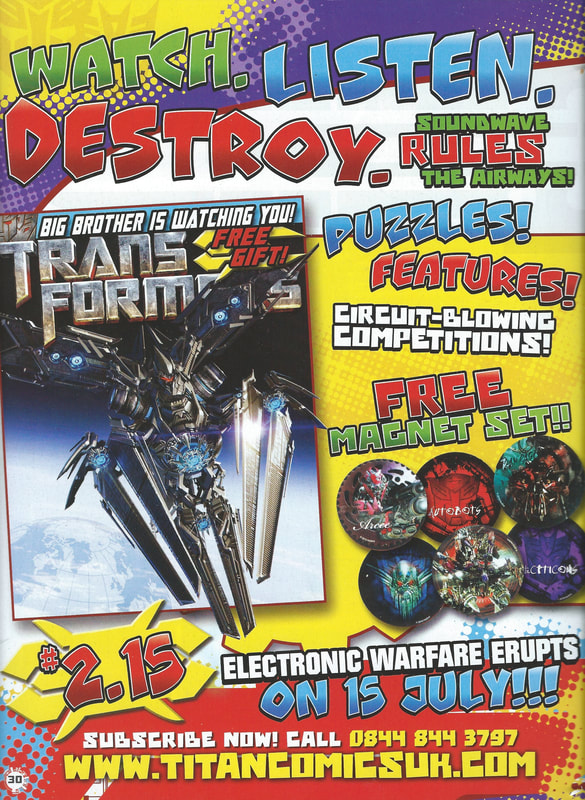 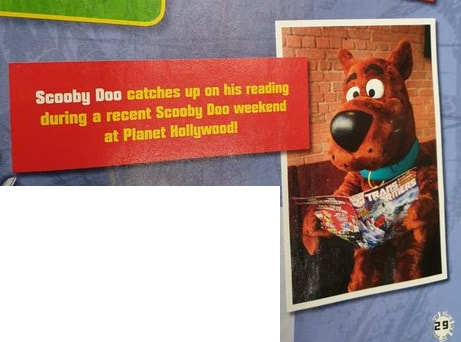