We're on the Ball. 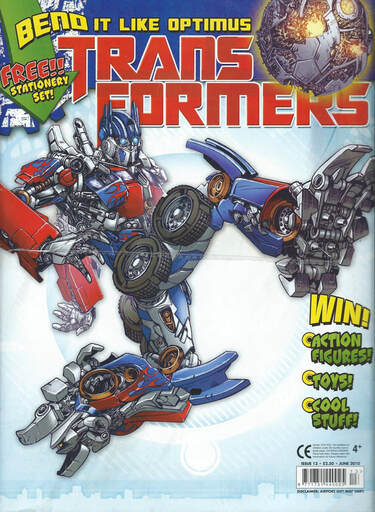 
...Where post-game celebrations have turned into a pitched battle for survival...


We have something of a unique issue this month. Outside of Christmas this is, I believe, the first issue of a UK Transformers comic to be specifically tied to a contemporary event. And I don’t just mean the cover of Prime “Bending it like Optimus” (and kicking the old G1 model of Cybertron we saw in the Marvel comic many times), this is an issue fully themed around the 2010 Football World Cup.

Now one interesting thing from the Wiki is that Furman originally announced on his blog (around the time issue 9 was in shops, for an idea of the lead-in times) that he had just handed Inside Out! in... as the 14th issue.

Assuming he didn’t just miss-type, that’s the first definite confirmation of strips being moved about. On the surface (and to make another assumption that it didn’t get caught up in the kerfuffle over the page count shrinkage) this seems an odd choice as 14 will be on sale for most of the contest. But 13 does cover the opening days, and someone probably very wisely thought that when it comes to England’s performance, it’s best to capitalise on it early.

Indeed, the 2010 World Cup is probably best remembered for ITV sticking an add break on as England scored one of their few goals.

The Force Awakens (2015).
The strip itself pulls of something slightly unexpected by revealing that the last few Furman issues have actually been our old friend the Anthology Epic, with this being a big turning point where it becomes obvious.

Yes, the Jolt shocks a Decepticon storyline hasn’t just been random toy promotion, it’s getting a whole bunch of characters into place into a NEST jail (let’s assume they realised they might have found out about the Fallen a lot sooner if they’d had a few captives to interrogate, hence the drastic change in policy) that’s located at their secure and isolated base in Diego Garcia...

Oh no. It’s in the South African city of Bloemfontein. Close enough to the football stadium you can chuck an Autobot from there into the crowd.

I’m sure this will end well.

Though previous issues ended with Decepticons being carted off in stasis, here the familiar group of captives are awake and tied by chains upright in their cells. Including a very smug Bludgeon.

"Wideload has been pulled off at half-time" "Lucky, at Leicester we used to only get oranges".
Turns out Bludgeon totally genuinely got himself captured on purpose (which I’ll accept as it makes Jolt comically useless) to be locked up with a potential army. And because the cells are now full and eyes of the world are on this city, he cheerfully lets Scalpel out of a hidey hole in his arm and removes an energon sword from his shoulder.

Security isn’t great here is it?

This takes a degree of inspiration from Shut Up! way back in issue 282 of the original comic, but with more football as a game between two completely generic teams has just kicked off at the stadium. Giving Bludgeon his audience of millions as he “declares war on the entire human race!” with a surprisingly cheerful grin on his face.

Luckily NEST aren’t fools and they’ve got a crack team of Autobots on hand in case of a breakout... Wideload, Smokescreen and Brawn!

I wouldn’t be surprised if this was meant to be our usual trio of cadets at one point, before new toy advertising took precedent.

Bludgeon meanwhile, hates new toy advertising, and so lets Breakdown out of his cell just to kill him in a moment that looks remarkably like the later death of Han Solo in The Force Awakens. Considering Rogue One had characters named after Galen and Llyra from Headmasters in it, is someone at Disney an insane fan of Transformers comic minutia?

I think you can tell he's more popular than Breakdown.
Movie toy Breakdown was also killed no less than three times by Furman in different comics, suggesting an attempt to make him the new Getaway.

The other Decepticons (including Lockdown, making me wish the Age of Extinction comic had lasted long enough to explain this) do escape, with Wideload being chucked hard into the crowd at the stadium and clearly crushing a bunch of humans to death.

Making the newscaster’s “Pitched battle” (because it’s on a football pitch lol) joke in rather bad taste.

Just as the Autobots look doomed and they think it’s all over, some proper reinforcements arrive, forcing the Decepticons into a retreat. But as the Autobots prepare to give chase, the word comes down from Optimus (not present, presumably he was coaching Team USA to draw against England) that there are too many humans present and they have to stand down. Meaning a rather public televised humiliation for the good guys.

Despite tailing off a bit with the ease of the Decepticons being driven off (maybe this would have been better as a two parter) and the football angle being slightly forced, this is quite good fun. Bludgeon is a great, cheerful villain and Davis-Hunt is on fine form at this point, with some of the action poses feeling reminiscent of E.J. Su. With the storyline finally kicking into gear and a more downbeat ending, it feels like the comic has found some of the oooomppphhh it had towards the end of the first volume again. 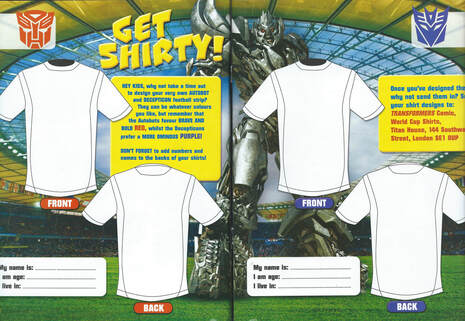 With how often the Decepticons retreat, you'd be better off putting the front on the back.
The editorial being called Injury Time! emphasises that the football theme goes beyond the cover and the token effort in the comic. Though before you get there, you have to survive Bumblebee’s Guide to the Solar System: Mercury. Where the attempts to connect this to the actual title of the comic are already desperate, as one of the interesting facts about the closest planet to the sun is that Soundwave has never been there.

Get Shirty is fully on theme though, asking you to design the front and back of two football strips, one for the Autobots and one for the Decepticons.

The Beautiful Game is nothing but football questions (“The World Cup final is scheduled for...”), with only the last question asking you to spot Barricade amongst the police cars the world has sent to help with security being Transformers related. For some reason art of Generation One Prime and Megatron is used on the background, with Prime being...very... thrusting.

Competitions are also letting the side down this month, being for Lego Prince of Persia sets; Human Alliance Bumblebee; Young Sherlock Holmes: Death Cloud by Andy Lane and a Transformers Animated bedsheets.

Law and Disorder starts with the two hosts mid-argument about the War For Cybertron game, suggesting either Barricade is on the edge of a breakdown or an opening comment from Ironhide has been cut by accident.

Five year old Josh Gambles has (presumably with help from his parents) has made himself a Bumblebee cosplay that actually transforms. But as he loves Bumblebee smashing Barricade in the film, the Decepticon is less than enthusiastic.

This month belongs to the girls who have been made fans by the movies though. 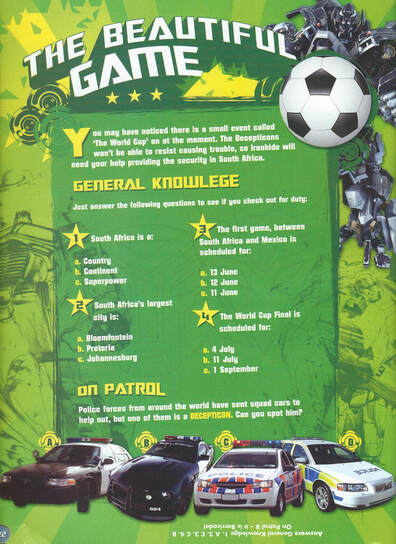 Are you OK Prime?
11 year old Lucy Bourner from Weston has become a fan of not just the movies but also G1 after being tricked into renting the ’86 film after confusing it with the Bay effort. She’s keen to find out when Unicron will be in the new films, an idea that is apparently very popular in the letter bag and which gets roundly mocked by Ironhide and Barricade. Quite right too, imagine how bad that would be.

Meanwhile, 14 year old Gem Martin has a whole host of questions. Though as Barricade’s reply to the one asking about the release of the third film is basically “Google”, you can see why letters pages are starting to die off.

Which might be why there’s also room for some more Design a Bot entries, from Jack Beauchamp and Evan Tayler.

Starscream’s Stars experiments with telling a story about love. Starting with Cancer revealing the Stars have promised you love, but that’s not very helpful, going through a falling out with the Stars over their failure to deliver (Scorponok: “The Stars have deleted your number from their mobile”) and ending at Taurus making up with The Stars and the suggestion you should just wait for love to find you.

It’s all very well done, despite the opening Gemini not being related to the narrative at all.

And it’s not bad advice. 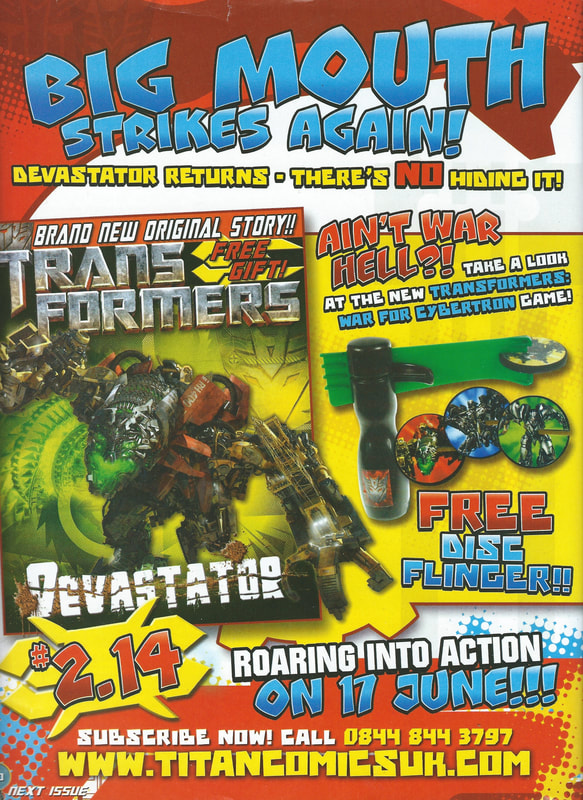 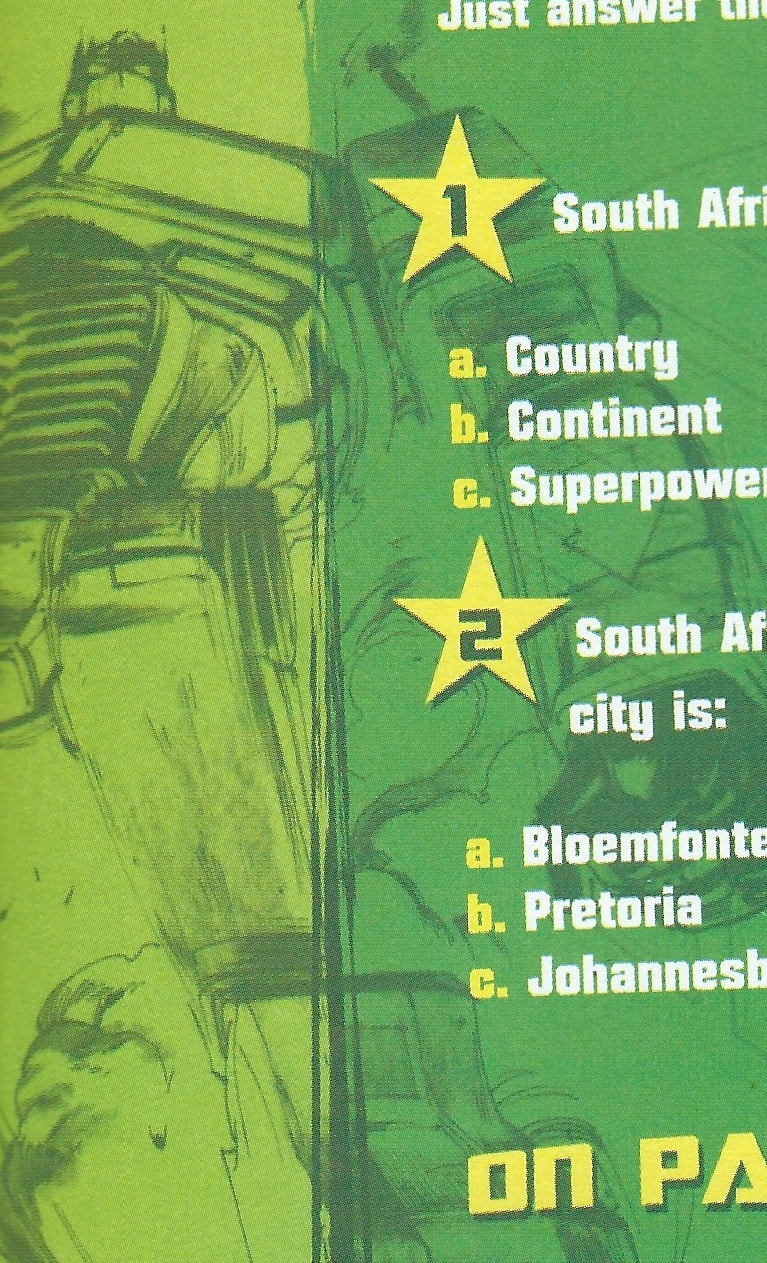