Hey Up Santa Anna, They’re Killing Your Soldiers Below. 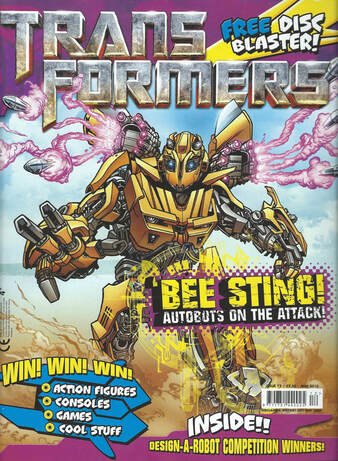 
So NEST builds a secret armoury under the site of a famous siege? Someone really didn’t think that one through...


After last month’s brave experiment with Dead End, the comic is taking no chances this month. Even though there isn’t a single character from the films in the strip (not even the equivalent of the Ratchet cameo at the end of Spare Parts!), Bumblebee is front and centre in what I suspect is some just in case stock art they had laying about like the Ironhide cover for issue eight.

It’s also the first cover since the relaunch I’ve spotted the signature on (more notably on the poster version), B.J. Spiersio, the first confirmation to this art style philistine that Davis-Hunt hasn’t been doing all of them. Well done B.J., I hope the bear is OK.

The comic itself is one that feels like it might have been presented out of order. In that our three new recruits are doing a training exercise and bemoaning to their drill sergeant that they need to be tested in action, making it feel like they hadn’t successfully taken down a zombie Decepticon last month. Or that Jolt hadn’t already been seen failing and succeeding out in the field two months ago. 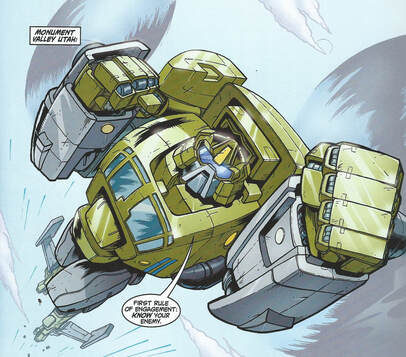 First Rule of Toy Pimping: Make it seem more awesome than it is.
Of course, as that first Jolt story was still an 11 page strip, it seems unlikely it wasn’t intended to go first, so maybe Furman has just taken his eye off the ball when it comes to character development?

The strip itself is very light, mainly just being an excuse to promote three toys from the line that hadn’t yet featured. One of whom (we’ll come to at the end as he’s really the main feature here) is clearly a favourite of Furman’s because of the name and two the colourist can’t even be bothered to get right.

So after a training exercise for the trio where they’re encouraged to think outside the box, Decepticon Tankor has taken over a secret NEST weapons dump under the Alamo, complete with tourist hostages.

Having a weapons base under a tourist attraction is of course ridiculous, and very much inspired by UNIT being under the Tower of London in the revived Doctor Who. The NEST trooper who points out the irony of this is called Lennox by the Wiki, but he’s not identified by name and doesn’t look like Lennox did when he had the handy name badge the last time Davis-Hunt drew him. Whilst there’s nothing to prevent Lennox having had a severe haircut, it seems an odd conclusion to have jumped to.

Whilst our heavily featured star takes on Tankor (who does turn from green to his proper blue before the end of the issue at least) and the just arrived backup of Dirge, Jolt decides to ignore the order to prioritise the hostages and simply sneaks up behind Tankor and electrocutes him.

Which I guess answers my question about whether every Jolt story was going to end with him just zapping the villain.

Can't wait for the next issue of Jolt Zaps Things.
When the real star then berates him for disobeying orders, Jolt throws his second “rule of engagement” back at him about thinking outside the box. Which is odd considering the hero of the moment only found out about the hostages right before going to take on Tankor and never gave any such order to the three noobs about prioritising them. Which is an odd lapse in storytelling from an experienced writer, I wonder if this started out as an eleven page outline?

With the story basically a nothing, that leaves our third new character, the one so important he gets coloured correctly throughout... Springer!

Who has a legends toy based on a design that was going to be in the film at one point, which turns into an Osprey helicopter that means he can be drawn as a giant towering over the other robots.

Furman has clearly latched hard onto a favourite name from his Marvel days, so even though he does nothing except fly that makes him different from Ironhide, he gets a near full-page splash introduction before we’re repeatedly told how great he is by every single character. It could be a bit much (and how does he plan to lick the recruits into shape when he has no mouth?), but it winds up being quite fun in an Ace Rimmer style way.

Otherwise though, despite both being equally flimsy on paper, this isn’t anywhere like as much fun as the last issue. And by this point the only difference between Jolt, Dune Runner and Rollbar and the Twins is there are three of them rather than two. 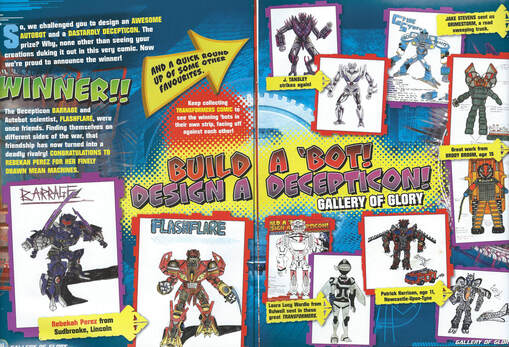 I hope there were a BARRAGE of complaints about the comic not happening.
The editorial (Out of Order) sounds rather needy this month with its “You couldn’t keep away, could you?” opening. Guess they’re worried another disc blaster isn’t all that exciting a gift.

The big thing this month is the announcement of the winner of the Build a ‘Bot! Design a Decepticon! contest. With both ‘Bot and ‘Con award going to Rebekah Perez from Sudbrooke for Barrage and Flashflare. Who are not only well designed, but come with a backstory about being former friends turned enemies. Sadly the promised two page comic will in fact never happen, presumably because there was no money for it.

The other runners up include Grimestone by Jack Stevens, who turns into a road-sweeper. But it’s Patrick Harrison, age 11 from Newcastle, whose entry stands out as his unnamed red fire engine is pretty much Sentinel Prime a year early.

Way Past Cool! looks at Iron Man 2, 2010 FIFA World Cup South Africa and Super Street Fighter IV. But in terms of irrelevant features supposedly hosted by Bumblebee, we get a new one that’s a dozy.

Yes, Bumblebee’s Guide to the Solar System has a couple of token mentions of film related stuff (the Decepticons having been to Mars, there being so many planets that it took Bumblebee take a long time to find Sam), but otherwise this overview of the eight planets and other debris in our area of the Universe is exactly the sort of filler stock trivia page that pretends to be relevant with a picture of one of the characters stuck on it you’d find in a 70’s Doctor Who or Blake’s 7 annual.

Law and Disorder has changed its design a little, most notably how the replies between Ironhide and Barricade are represented, which seems to confuse the person doing the layout as Barricade is the one saying to Nathan Blackstone (11, Crowborough) that he’s going to check if the Decepticons have done anything about resurrecting Blackout. 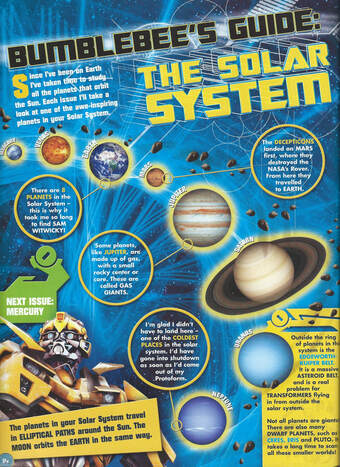 Bumblebee would totally see Pluto as a planet.
Nathan (who also gets some flack for thinking the book is weekly) is also assured that Starscream’s mission in deep space that’s keeping him from the letters page has taken him so far away it’s going to take him a long time to get back...

...or security at the home for the megalomaniacal is just too good.

Aaron,12 from Leicester has missed out on the competition, but still sends in him own Transformer, Luna (named for their time on Cybertron’s moons), a brightly coloured infiltrator. An idea that, unusually as he’s usually the nice one, draws Ironhide’s scorn.

Dan Farnes, 24, sends in a photo of themselves dressed as Soundwave and talks about having been a fan since the 80’s (remember when you could still be in your twenties and remember the 80’s? Great days), making Barricade remember the time he was a Micromaster and Ironhide looked liked a red Ratchet. Which is basically the pitch for the Bumblebee movie.

The person to feel for this month though is four year old Conner Shawn Boxall-Thomas (who is surely definitely going to find this when Googling himself with a distinctive name like that, hi Conner). Who loves Transformers, has lots of the toys, gets every issue of the comic, is a big fan of Skids and Mudflap...

And won’t be allowed to watch the films till he’s 12. Barricade uses this as an excuse to try and sell him War For Cybertron to make the eight years pass by quicker, but I hope you were able to beat The Man (or rather your mum) and watch the films before then Conner.

Starscream’s Stars tells me and my fellow Scorponoks that life does come with instructions, but they’re in Korean. I’m glad not to be Libra though, as the Stars have officially given up on that sign for never listening to their advice. 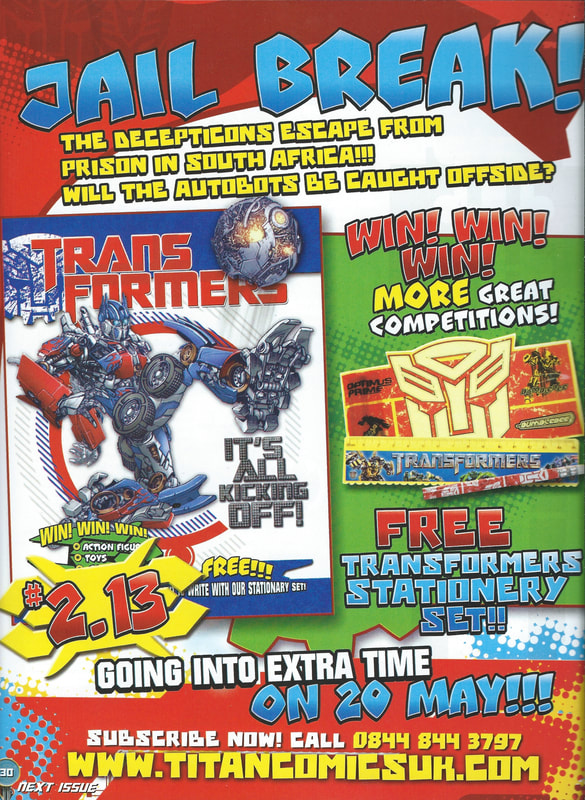