But You’re Not Fooling Me, ‘Cause I Can See, the Way You Shake and Shiver. 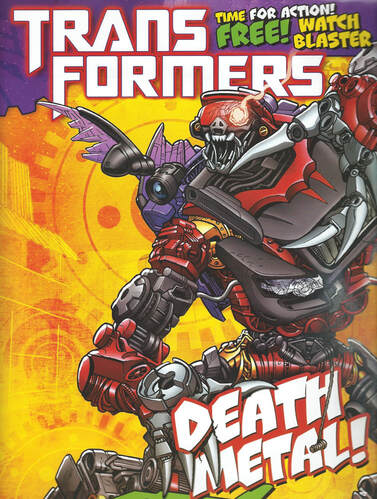 
See, I’m rather attached to my body parts.


We get another super sized cover this month, with the logo and blurb about the design-a Transformers-gallery placed too far apart to both fit into my scanner, meaning one has had to be sacrificed today.

More pertinently though, the flimsy excuse for the over-size (a cut out target for you to fire your Free Watch Blaster at) is just an excuse to put the price up again. To five pence more than it was before the page count cut. Sneaky.

Dead End also becomes our first (and possibly only, I’ll have to see how it goes) cover star not to have been in a film. It’s a pity all sorts of effects are put behind him to cover put the Western ghost town on the poster version in the middle of the issue, it’s actually a rather neat piece of art.

Inside, we get what is basically a Halloween special in March. It’s also Furman’s first 8 page strip. Solicitations had it featuring the additional toy only character of Depthcharge and being set in Alaska. Which suggests there might originally have been an 11 page script (or at least outline) and Furman had chance to shrink it this time. As the location is largely irrelevant to the plot, the switch to an abandoned ghost town in Death Valley might have been down to the preference of Davis-Hunt. 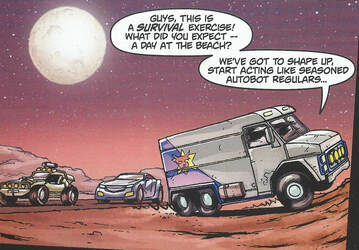 "I played a vital part in stopping the sun blowing up, fuck you Rollbar"
Whatever the original plan might have been, the final version of Spare Parts! (Furman had written for Big Finish Doctor Who around a year after that classic audio came out, so it might have been a deliberate reference) opens with Jolt and his team of fellow new recruits Dune Runner and Rollbar taking what is supposed to be a simple training mission to find an emergency recharge pack hidden in the abandoned town.

Oddly Dune Runner talks as if all three of them have only just arrived on Earth and have missed all the action, meaning there’s a real chance Furman didn’t spot Jolt in the film.

Even more oddly, a flashback to the sort of low level rounding up individual Decepticons antics they’ve been up to has Sideswipe and Ironhide taking down the evil and monstrous...

Hoist (whose G1 inspired film toy was still an Autobot). Who’d have expected him to turn, of all the robots. 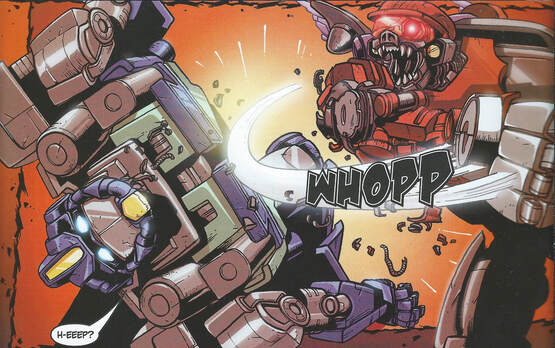 Fuck you Rollbar.
Still, the Autobots are largely irrelevant here, with even Jolt not having the same level of the personality he had two issues ago.

No, this is about Dead End, a shambling zombie Decepticon who has been following the team, and then proceeds to hunt them down, shouting about “SPARE PARTS” and removing limbs violently as he goes to add to his own body.

It’s a great visual that Davis-Hunt is having a blast with, and makes Dead End the most successful introduced by the comic character since Stockade. It’s almost a shame when Jolt uses his electricity power to knock the Decepticon down. Which makes me wonder if “He just electrocutes them” is going to be how every Jolt issue will end.

"He has an ironic name!"
This story does have a coda though, back at Diego Garcia, where Ratchet tells the cadets off for thinking killing Dead End would be best, because that’s not the Autobot way (subtle swipe at the films there) and explaining that Dead End is the result of an experiment performed by Megatron on one of the Hatchlings from the film to create a soldier that can self-regenerate... with very mixed results.

But he’s still proud of the cadets for having brought the ‘Con in alive to be cured, and as far as he’s concerned they’re true Autobots.

Let’s hope nothing happens in future to make it look like killing Dead End was the better idea.

This is by far the best issue of the second volume to date, showing the advantage of a regular creative team. Furman has worked with Davis-Hunt long enough to have the measure of what he can do and to trust him enough to throw a script that is entirely dependent on the visuals at him. Much like some of his better collaborations with Geoff Senior back in the Marvel days there’s a lack of ego in the slight plotting here, it’s entirely about letting the artist show off.

Which he does with aplomb, this is JD-H’s (as I’m now going to call him to be cool) best work to date, having an absolute ball bringing the slobbering insane walking corpse to...erm...life. For the first time since the relaunch, the book feels on a sure footing. 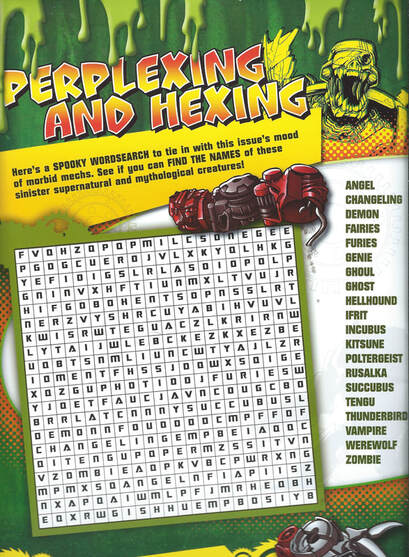 It's March.
The aforementioned back cover target is somewhat odd is that you’re clearly supposed to play the game as a Decepticon as you’re shooting at Bumblebee, Sideswipe and Prime, but talks about how you’ll be standing tall with the Autobots. Then on the reverse side you have an equally oddly worded Decepticon target with Devastator, the Fallen and Megatron. That side seems a bit over powered.

The inside front cover continues the horror theme with a wordseach where you have to find such fiendish words as “Ghost”, “Hellhound” and, erm, “Thunderbird” (someone must have been scared shitless by the one with the alligators). The editorial then talks about this being “The night of the living Decepticon”.

Again, this comic was published in March, not October.

One thing we’ve not really touched on yet is that we are now into the age of the smart phone and tablet, with accompanying new ways of reading comics. There have been adverts recently for reading Sean the Sheep on the IPhone, but now Transformers has joined the fray, and if you download the app you can get the first issue of the first volume for free.

The colouring page is, like the poster, the full version of the cover art and rather cruelly asks if you think you could do better.

Even the competitions are themed this month, with two terrifying books up for grabs: Grisly Tails From Tumble Water by Bruno Vincent and Crawlers by Sam Enthoven.

Soundwave’s Space Shots presents five Google Maps pictures of locations from the films—Hoover Dam; Shanghai, China; France; Pyramids, Egypt and Qatar (not sure why France and Qatar get to be so much less specific that the others) and asks you to match the name to the place. There’s also the added puzzler of five hidden Ravages on the page.

We’re promised the winners next issue, but here we have a double page spread of runners up for the design a Transformer competition. Unlike when Marvel did this in the early days, there’s a pleasing lack of copying of existing toys. The most elaborate is Blitzpulse, who apparently sent in his own entry, complete with profile. My eye was drawn to Starshine by 13 year old Leah Kerr (leaker? Is this a fake entry?), who has a colour scheme that reminds me of the later IDW character Anode. 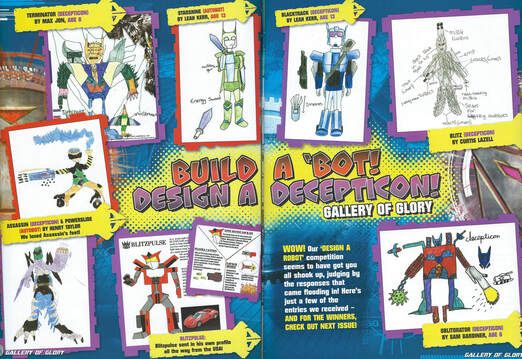 Kids got talent.
The further back in the issue than usual More Than Meets the Eye has a Decepticon themed crossword and encourages you to create as many words as you can out of “Wheelie”. Though as one of the suggestions is “Wheel”, maybe their heart wasn’t in it.

One thing that has crept into Law and Disorder so slowly it’s only really stood out now is the simmering romance between Ironhide and Barricade. That smooth talker Ironhide starts this month with “When we started this letters column I could have happily ejected you into the nearest star, but now I’m getting to like you”.

To which Barricade objects, but half-heartedly and with much talk of potential defection. Though Barricade is scared to commit.

I hope those crazy kids work it out.

In keeping with the theme of the issue, a photo of a Decepticon logo Jack O’Lantern has been sent in by five year old Thomas Scarlett of Crewe.

Again, this issue was published in March, not October.

The real kudos this issue though goes to Sean Wood, age 10, who has emailed in with his brand new combiner idea for a flying Autobot team called the Aerialbots.

Yes, he’s given them new alt-modes (Silverbolt’s SR-71 is pointed out to be antiquated by Barricade), but this cheeky kid has claimed to have invented Superion, and all power to him.

Starscream’s Stars tells me that this month I should “Chose my words carefully whilst playing minefield Scrabble”. Deep man.

Next week... Well, it’s the April issue, so probably Christmas. 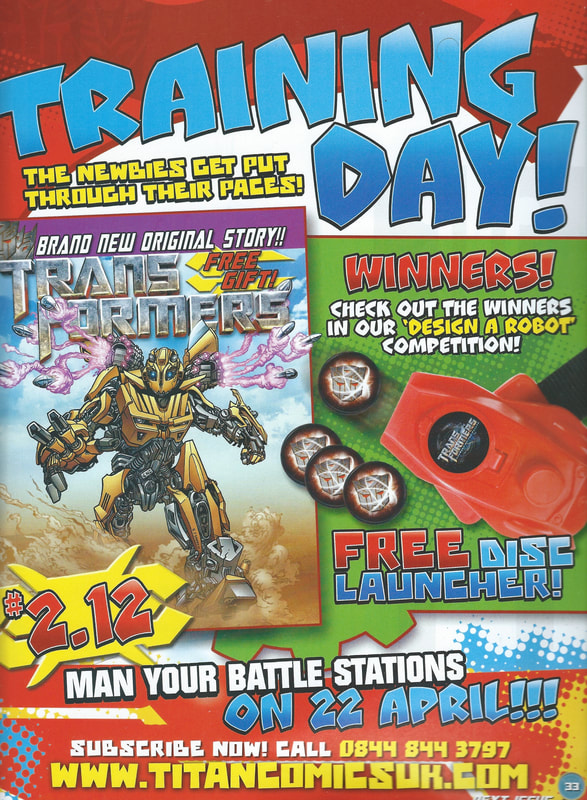