I’m Through With Taking Falls, I’m Bouncing off the Walls, Without That Gun, I’d Have Some Fun, I’ll Kick You in the... Nose. 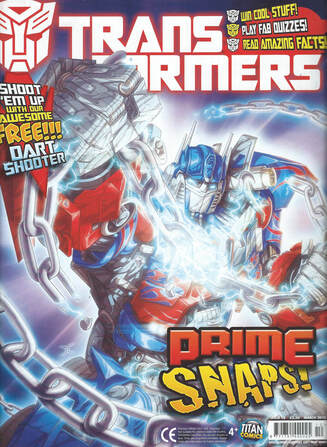 
And I could not escape at just any moment... only when it was funny.


After the shrinking of the comic last month, issue 10 sees the reformatting completed as the strip itself is reduced to eight pages from 11. Though at least this time a whole 20p is knocked off the cover price to make up for it.

It’s also the first time Roger Etherington writes the main comic. From here on in, we’ll get the occasional issue from him before he takes over full time with the third volume. Though I’m not sure if this was down to Furman having other work commitments, or if the budget cuts meant balancing the books with the odd bit of work by a newer and therefore cheaper writer.

Now, Etherington’s Revenge of the Fallen strips will generally read as if they written to slip in as filler as and when needed. But as this is the first 8 page strip and it doesn’t really follow on from the last issue’s cliff-hanger (nor will the next issue, so whatever was planned hasn’t just been knocked back), one has to wonder if Furman had handed in an eleven page script and wasn’t available to shrink or alter it when the length axe fell, so Roger was called in at short notice to provide a replacement. 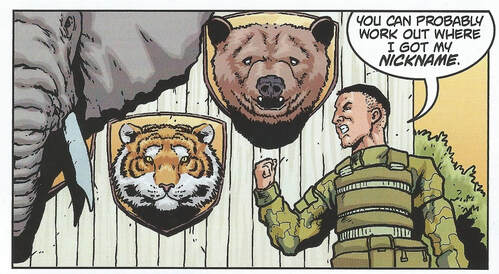 "tbh when you said people called you Bear" on grinder, this is not what I expected"
The other big thing to note is, the Western homage, title of Bring Me the Head of Optimus Prime makes it unambiguous that we’re getting a comic definitely written by someone who has seen the film and decided to have some fun with the “Give me your face” meme by asking how Optimus would like it.

Yes, we’re into a Bayverse remake of Prime Target from the original cartoon. And you can tell very much it’s specifically based on that episode rather than being a coincidental Most Dangerous Game riff as villain Tyler “Trophy” White makes a thing of wanting to put Prime’s head on a mount like the other prey he’s killed.

Yes, it’s an updated for the Teenies reworking of the time Optimus Prime said “Boobies”.

Though one problem with trying to do this sort of story in 8 pages is there isn’t actually any time for the hunt. So within a page, Prime is parachuted into a US military base that’s been mysteriously attacked (if you want to stretch it, you can pretend that this is following up on the call from the last issue, but the details don’t really match and Jolt must have actually obeyed orders and stayed behind against all odds), follows the tracks of the assailants to a ravine before being knocked out by a “Non-nuclear electromagnetic bomb” stolen from the base.

Which means the rest of the issue is devoted to a fairly savage, and more topical now than in 2010, take down of American right-wing survivalist nuts as the aforementioned Trophy tells Optimus, once he’s woken up shackled to two posts, how his Montana “Free men militia” work on the principal of “If it ain’t human, it’s fair game”.

Indeed, he enjoys hunting so much, he’s gone and bagged an endangered grey wolf whilst Prime was recovering just for fun.

What’s fun here is that this sort of militia would be completely against alien super robots helping The Man, but White is only interested in getting Prime’s scalp on the wall. Largely because Optimus is famous at this point (an idea the film sequels would run with), “Everyone with a TV knows ya now”. It’s gloriously pathetic. 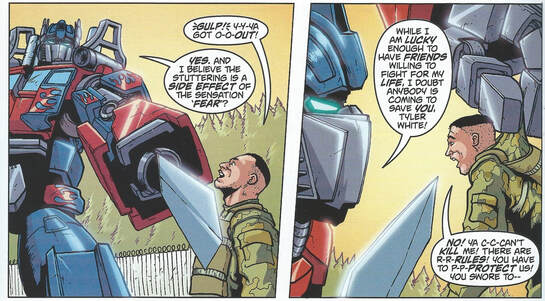 Like Optimus Prime would ever kill a human.
Amidst all this, Epps (yay!) and Bumblebee make a pleasingly odd couple team up, following Prime’s trail to the camp and launching an attack to rescue their leader.

But just at the point the reader might be thinking this guy who wants to cut Prime’s head off with a rusty knife is posing a bit too much of a threat to him...

Prime just shakes off the shackles. What holds a mountain lion was never going to be good enough for a giant robot. We then get a moment when he seems genuinely incredibly pissed off with White, holding a blade to his face and going “While I am lucky enough to have friends willing to fight for my life, I doubt anybody is coming to save you, Tyler White!”. Which certainly makes the human think he’s doomed.

But all Prime actually does is cut the heads of the killed animals off the wall. Turns out he knew the weapon had been stolen (though his opening first person narration cheats a bit by making him seem more oblivious) and deliberately walked into the ambush. He was never in any danger, and just waited till the last moment to break free because, in an unlikely Who Framed Roger Rabbit quote, that’s when it was funniest.

Blimey, Prime is a dick, isn’t he?

Despite the limitations of the length meaning it can’t really do the type of story this is paying homage to in full, this is actually quite good fun. It is aimed a little younger and the militia stuff doesn’t quite gel with that, but as a sign of what the comic will become when Etherington takes over full time, it’s more than promising.

|interestingly, it also feels like Davis-Hunt has simplified his layouts, I'm, not sure if that is because this was a rush job, or if that's going to be a new more simple and kid friendly direction going forward. 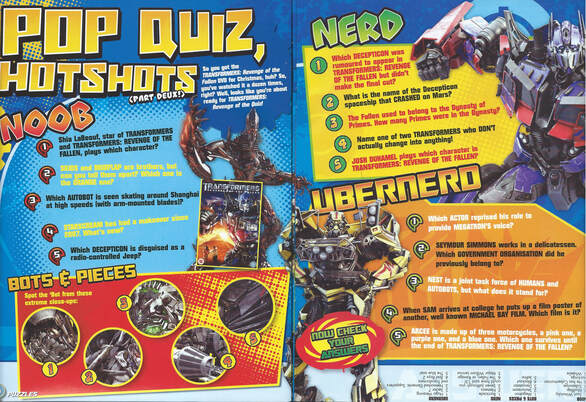 "Hello fellow kids, we know what a "NOOB" is here at Titan!"
Which is more than the editorial makes the book sound, trying to big up the contents before whimpering out on a “well... everything” that sounds less than enthusiastic. This is also, I believe, the first issue where the cover notes the free gift may vary at airports, just in case you try and highjack a plane with your foam dart shooter. I’ve not been keeping close track of the gifts as I don’t have them, but from here, it becomes harder to tell what you may and may not have gotten with each issue.

Pop Quiz, Hotshots (part deux!) mangles a catchphrase from Speed and the name of a Charlie Sheen comedy to test your knowledge of Revenge of the Fallen, with three tiers of question: Noob (“What Decepticon is disguised as a radio controlled jeep?”), Nerd (“Name one of the two Transformers who don’t actually change into anything!”) and Ubernerd (“Which actor reprised his role to provide Megatron’s voice?”). Which is the first of two places in the issue to confirm Titan regard NEST as standing for “Network Elements: Supporters and Transformers”.

Way Past Cool confirms Nintendo don’t have the hold over the comic they once did, as Bumblebee reviews Half-Minute Hero (only on the PSP); Sonic and Saga All Star Racing; Star Trek Online (just PC at that point) and Astro Boy.

The profile this month covers Soundwave, and in contrivance of one of the answers to the Hotshots quiz mentioned above, spells out that Ravage (who is hidden several times over on the page) turns into a missile. For some reason it calls the dog Soundwave’s “Partner” in inverted commas, as if there’s something going on there.

Primary Targets is a quiz page with a name to make you think it’s themed around the comic, but is in fact a surprisingly hard series of maths puzzles to outwit Soundwave after he has infiltrated the mainframe of NEST headquarters. 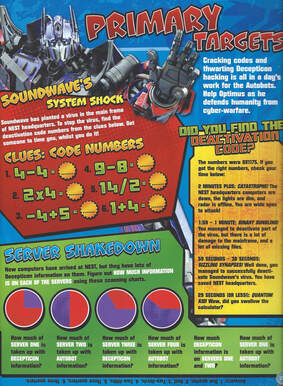 How are your pie chart ratios?
There’s only two competitions this month. The first for Ben 10 Alien Force Humungousaur Hands (basically those Hulk hand gloves, but in brown) and a Lego Atlantis set.

Ironhide and Barricade show they too have definitely seen Revenge of the Fallen as well, opening by talking about the weakness of the Decepticon plot to destroy the sun in the film, with Barricade weakly ending by going “We Decepticons have plenty of other excellent schemes!”. Ironhide also points out how much Prime likes collecting faces.

Amidst the nice letters and art from kids, 40 year old Mark Molloy of Birmingham sends in a charcoal sketch of Mikaela that is, in the nicest way possible, exactly the sort of drawing a serial killer has hanging on their wall of their next victim.

Starscream sees a bold new future for me this month, suggesting I’m going to take up ballroom dancing and become the first Decepticon in a pink dress and tiara.

Next week, Furman and Jolt return, but have they hit a dead end? 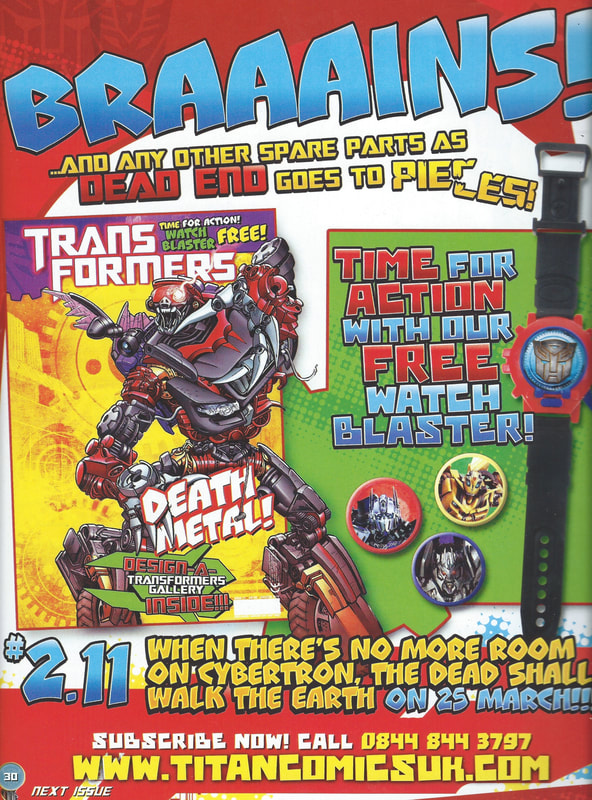