Can I be Electric Too? 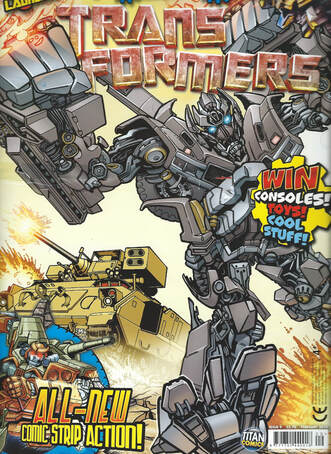 
Let’s see how long you can keep it up.


The attempt to keep the comic going in the face of declining interest starts here. Our last normal issue, #7, had 50 pages. The first in this new reduction has 34. For the same cover price. It’s probably a good thing that the comic part of these sort of UK comics is never considered the main selling point in comparison to the myriad of free gifts (in this case a pump action jet launcher).

Still, the bigger cover (again buggering up my scanning) and highlighted amazing competition I’ll talk about later do seem to be very much designed to try and soften the blow somewhat. Though said Ironhide in the desert cover also looks suspiciously looks like an unused one originally drawn for issue 8 of the first volume with Bludgeon from the strip plastered in the corner.

Inside, the real surprise is the comic is still 11 pages as I thought this was the point it was reduced as well. Presumably this was too far along in development to be cut back along with the rest of the format change.

Now, after 8 months of the twins and to sell paying the same for less, Culture Shock has to come in strong with one of the big hitter, a popular character that all the kids will be dying to read about month in month out. 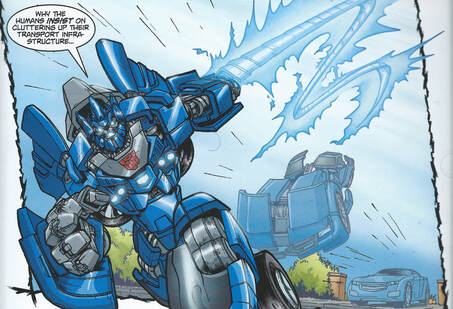 Jolt!
You know, Jolt. He’s in Revenge of the Fallen for about two minutes at the end, to use his electric powers to stick parts of Jetfire’s dead body to Optimus Prime. With, according to rumour at the time (though you can never trust any rumours about the Bay films) an incredibly minimal role because the director hated electric cars.

Now, of course, he had a toy to sell. And is easily the most high profile of the new characters introduced here as he was at least in the film. But it’s fair to say that the main advantage he has over the twins is Furman can just invent a personality for him.

Which... turns out not to be so different from the Twins as we open with a joint Autobot/NEST operation chasing the (toy only, no film for him) Reverb through Beverly Hills. With Ironhide and the back on the team Ironhide trying to coordinate things sensibly, Jolt just chases the Decepticon about with no concern for human safety because he’s just that kind of why drive in a straight line maverick rule breaker.

Which culminates in a slightly confused sequence where his electro-whip getting caught on a lamppost shorts out the entire street and blows out car windows. Before Bumblebee just knocks out Reverb by driving into him.

Lennox!
Which give us some unexpected cameos when we cut to Andrews Air Force Base (possibly meant to be the actually in California Edwards) and Galloway and Lennox appear. Though whilst Galloway reminds Prime Lennox threw him out of an airplane (look ma, we finally are after the film!), the Captain doesn’t speak and isn’t directly referenced as if he was there. Which, considering Furman has otherwise ignored the character, makes me wonder if this was a Davis-Hunt addition not in the script.

Galloway is angry and yet delighted at the one hundred million dollars worth of damage caused by some noob, as it gives him the chance to get his revenge for said airplane push as it will let him push to shut NEST down. Talk of the Pentagon meaning that Furman didn’t spot NEST isn’t American any more than the snooty fan.

Incidentally, though he's set up as a recurring villain here, Galloway will never be seen in the comic again.

This is where Prime, who really doesn’t seem to like any of his newer troops, takes Jolt to one side to tell him to short his shit out, Earth cannot contain their powers like Cybertron could. To which Jolt agrees. 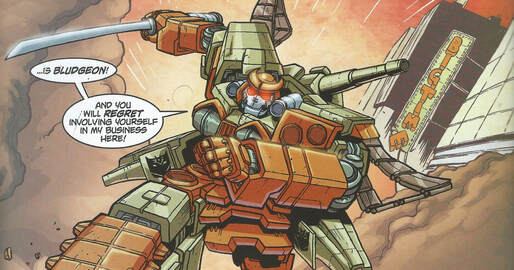 Bludgeon!
Which is where we jump-cut to Las Vegas (again, had Furman been on holiday? At least we get Julius Palace and slot machines this time) and Jolt in the middle of an incredibly destructive fight with...

Of course, once we got a Revenge of the Fallen Bludgeon toy based on his IDW design, Furman was always going to give him a bigger role than poor old Reverb. He’s going to be an important character going forward, but here he’s mainly a foil for Jolt to teach him a lesson.

So as they fight with increasingly kinky dialogue (Bludgeon’s reaction to the electro-whip: “Mm, that...tickled”), Bludgeon makes a point of how much he love the variety of life on Earth and squashing it. And that he and Jolt are not so unalike as the Autobot just jumped into the fight with no care for the innocents.

Jolt takes this to heart (as he tells Optimus afterwards), but still uses the full extent of his powers to zap Bludgeon unconscious... and take out the entire electric grid of Las Vegas. 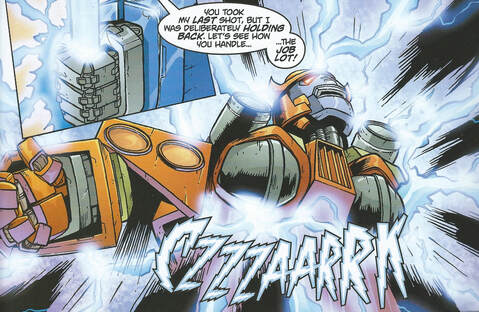 Shocking.
As Bludgeon is put into cryogenic suspension (we’ll see how this tactic that worked so well with Megatron in the first film and Optimus in Twilight’s Last Gleaming pans out across this arc in comparison to how the film’s just have the Autobots killing their enemies), Prime grounds Jolt despite him having learnt his lesson, but then a distress call comes in from a NEST team...

It’s amazing what a difference not having the twins makes as, despite being a fairly simple action issue, it rolls along nicely and feels much more lively that the last few months despite not a huge amount happening and Jolt being a fairly stock angry hothead character. But with some good art from Davis-Hunt and a visually impressive debut from Bludgeon, it makes for a nice fun issue.

To try and soften the blow, the inside front cover is a cut out Optimus Prime mask that’s just too big for my scanner and will let you be a “Human in disguise”. The editorial (Draw Their Fire!) tries to make paying the same amount of money for less sound like a great thing. “We’ve given you a leaner, meaner, greener fighting machine but with all the firepower of a big, fat waddling comic that could really do with getting into shape”.

Which implies Steve White thought the previous version of the title was a big, fat waddling comic that could really do with getting into shape.

But what in the issue could possibly top an advert for Yomega yoyos and their “Trick of the day featuring “OOCH!” as seen on TV!” You can walk the dog, UFO, pinwheel, double or nothing and boing boing for literally minutes of fun.

Less for more is best.
More Than Meets the Eye has a Security Breach wordsearch; Hidden Meaning anagrams and Reconfigured, asking you to make as many words as you can out of “Optimus”. Suggestions include sip and post, but I came up with “Pis”. Once you’ve totted up your score from the three games you can be rated from “0-10: Drone” to “41+: Outstanding”.

Competitions this month include a sex of six Bionicle Stars; Changeling books by Steve Feasey; Monster Republic by Ben Horton and a PSP (has the hold of the Wii on this comic finally been broken?!) and the 2010 Revenge of the Fallen calendar.

Just in time for February.

Sideswipe’s Armoury is devoted to the Nimitz-Class Destroyer, including pointing out that the Theodore Roosevelt is played by two other ships in Revenge of the Fallen. And apparently the class is “America’s greatest war machines!” 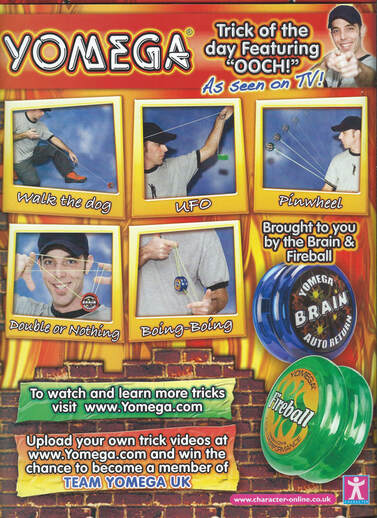 YOMEGA
Ironhide and Barricade seem surprised to still be here, opening by talking about throwing in the towel. Though it’s lucky they’re still going as otherwise we wouldn’t be seeing the robot that William Widdowson, Sheffield, has made out of his dad’s old mobile phone.

Barricade reveals to Autobot fan Emmet Hickey that Jazz’ last thoughts were “There go my legs”, whilst Ironhide takes the opportunity to remind Barricade how firmly he got beaten up in the first film.

Joseph Beaden, 11 from Buckinghamshire (who also sends in a photo of himself in Jetstream cosplay), asks about Dinobots in the third film, which Barricade thinks is incredibly unlikely to ever happen because Michael Bay doesn’t like the characters.

Starscream assures me this month I’ll be inventing a new dance craze. Which is certainly something I’ve been accused of with the way I walk.

Both sides of the back cover are given to our good old cheap friend, drawing pages. Though Build a ‘Bot, Design a Decepticon! does have the bonus that the best entry sent in will be put into a special two page comic.

But, as the Put yourself in the comic; competition has yet to pay-off (unless they did it without making a thing of having done so), I suspect we’ll never see this either.

Next week though, you will be seeing Prime on the hunt. 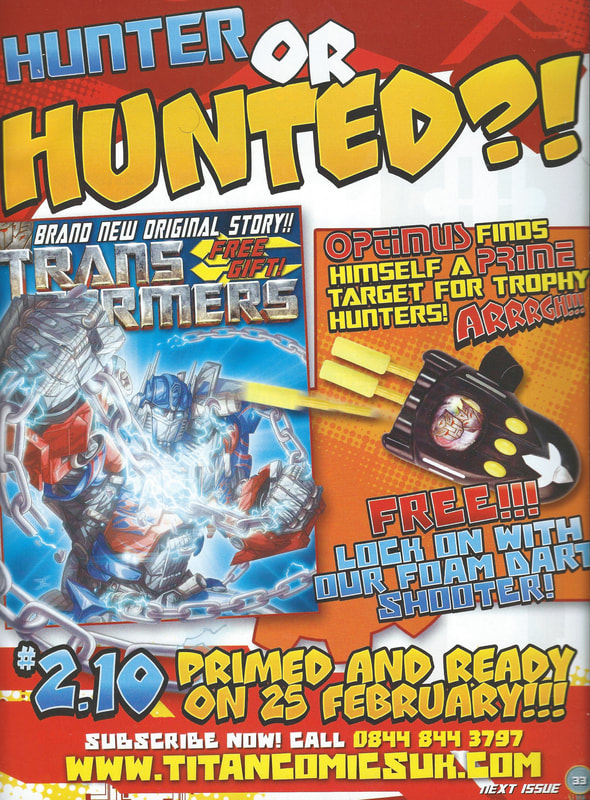