Won't You Let Me Take You on a Sea Cruise? 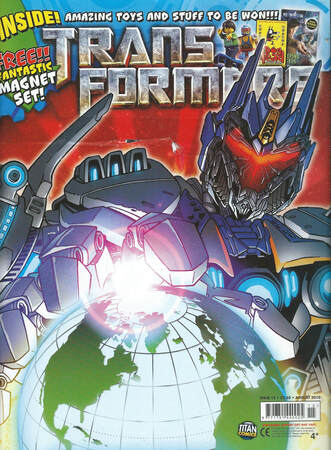 
I don’t believe this! I’m getting pasted by a ghost ship!


Roger Etherington returns to write this month, for the first of a three issue stint. Which feels a bit more than a fill-in and creates the impression that, even if this second volume had kept monthly right till the end, Furman’s time on the book was winding down and he might not have seen things through to a hypothetical 26th issue.

The start of this little mini-run (that is going to ignore the Furman plots) was clearly born of a very specific brief handed down from Hasbro. In the film, Soundwave turns into a satellite. The toy turns into an entertainingly half-arsed robot laying down “spaceship” mode. So there was clearly a mandate to do a strip showing this off so as to try and convince kids that it is a totally legitimate vehicle.

The resultant comic read suspiciously like an idea Etherington had knocking about for a while and quickly pressed into service. And I must admit dear reader, I had very little memory of this particular run of stories, and when it came to the reveal, I did a spit-take at the improbability of it all. 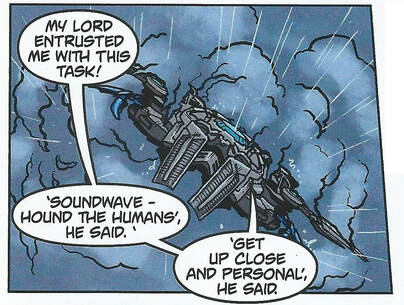 THIS IS A TOTALLY VALID VEHICLE KIDS
So we open with Lennox and Epps (yay! Though for some reason Lennox is being very formal with his pal) in the Bahamas, having laid a trap for a Decepticon that has attacked five merchant ships in three months.

This is all largely irrelevant though. Luckily as it turns out these attacks are down to Soundwave, acting on Megatron’s orders, to “Hound the humans”, and five attacks in three months sounds more than a little half-arsed.

The meat comes from the fact that, when Lennox springs his trap and successfully chases off Soundwave from the bait ship... the Captain in charge won’t chase after the Decepticon as his course will take him into... the Bermuda Triangle!

Which is basically where we get a series of gags of the increasingly frustrated Soundwave running into various real-life lost ships and planes from the two world wars in a state of complete confusion. 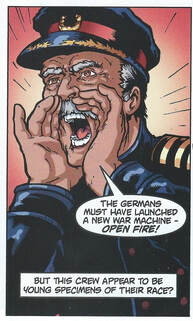 Soundwave is just a war machine.
Frankly, and this is where I get the impression this is an idea from somewhere else repurposed, Soundwave really doesn’t come across like the cool and calm villain from his film appearances (though him being more hands-on actually makes more sense in terms of Dark of the Moon). He’s now the sort of guy who monologues to himself, shouts “Blasted humans” and goes on at length about how great Megatron is.

This being the same guy who had plans to rule Earth for himself earlier in this same series. It’s also not really clear how his database can bring up (educational for the kids) real historical date on the USS Cyclops or Flight 19 but he’s never heard of the Bermuda triangle. And none of the lost humans from the first half of the 20th century seem remotely surprised to be fighting an alien death machine rather than the Germans/Japanese/British.

Despite all this, it’s actually quite good fun. As out of character as Soundwave is, and as easily as he’s hurt by outdated weaponry, his increasing sense of frustration and confusion is well conveyed and there’s a few good gags. My favourite (and one that confuses the Wiki) being Soundwave calling the crew of the first boat young for our species over a panel of a man that is, by our standards, pretty middle-aged. 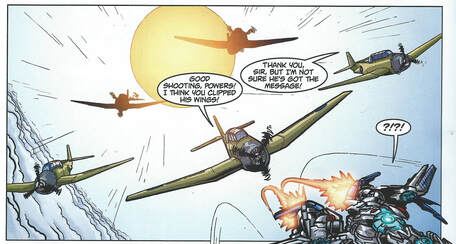 Turns out German pilots all spoke perfect Biggles level English.
Even the final gag, of Soundwave giving up on his whole mission and going to hide on the moon because solar storms and meteor showers are much safer to deal with than anything on Earth, is rather sweet.

On paper, this should be as disposable as last month’s issue. But it ultimately comes down on the side of being a winner, just through charm and Davis-Hunt having a blast on art. It’s definitely the best Etherington strip to date.

Which isn’t the impression the editorial gives, promising readers a HACK ATTACK! It also shows how poorly served Revenge of the Fallen Soundwave is for reference pictures, having to use one of Jetfire as the main image instead.

Competitions this month include ones for Lego minifigures (available to buy individually for the first time!); Dog Heaven Bites Back books by Jill Marshall; Dr. Who(!) activity books and Toy Story 3 Lego toys. 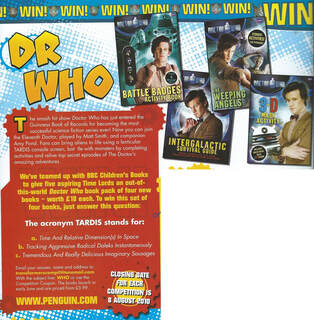 DR WHO?!?!?!
Bumblebee’s Guide to the Solar System reaches Earth and manages three whole references to what the comic is supposed to be about amidst the copied from Wikipedia facts. Including a then topical one about Icelandic volcanoes stopping Deceptions from flying.

Soundwave’s Synapse Strengtheners sees him tasked by his master, Megatron, to test human intelligence. These tests include decoding; recognising sound frequencies; telling which Transformer is which in the dark and working out who is in a picture that’s become mixed up. All of which are appropriate for the film Soundwave, but it feels like the guy in the comic would have struggled.

This issue also has what may be the single strangest feature in the entire series: In Memoriam: Jazz. I guess the Human Alliance toy was out now and this was a very odd attempt to promote it, paying tribute to the late Autobot three years after he had to split. But at the same time talking more about the Generation One version (who died during the battle of the Underbase) and the very much alive Animated version.

Total Devastation is a colouring page of last issue’s cover. But when will Devastator get a memorial feature? 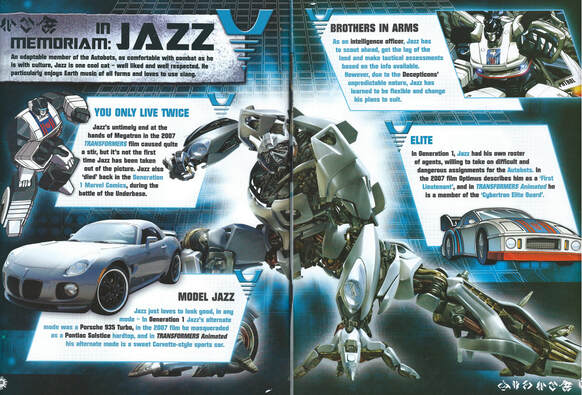 Apologies for my bad scanning, you can see Jazz is nearly in two halves.
Law and Disorder has Ironhide take time out from playing War For Cybertron (much to Barricade’s disgust), and we get what a clearly a couple of left-over entries from the design a Transformer contest: Shadowstar and Drift (no relation) by Rian Wilson, age 14 from Lowestoft. Considering how popular this competition has been, it’s a shame the winning comic never did happen.

Jack Gaughan from Glasgow asks the question we’ve all been wondering: What happened to Glen and Maggie? Which has Barricade none the wiser, but Ironhide (despite changing Glen to Glenn for some reason) assures us they’re basically exactly where they were in the first film.

Twins Owen and Dylan Burge have sent in a picture with some of their 65 Transformers alongside a letter saying how they enjoy the toys with their dad. And for their trouble they get compared to Skids and Mudflap.

Jake Singh Landa (8 from Kent) writes a letter addressed to Camshaft and Swindle. Which has Ironhide assuming a Velvet Revolution is happening to remove him from the page, before getting snarky and Camshaft and Swindle being a repaint of the same toy.

Losing Starscream’s Stars, and there being no photo of a Hanna Barbara character reading the comic this month, means an extra quiz page: Ratchet’s Remedies. Work out the right Energon cube to refuel different Autobots; reattach Ironhide’s central processor and sort out some more anagrams. Transformers sure do turn out to be unexpectedly fond of those.

Next week... Well, after the Bermuda Triangle, it’ll probably be a yeti. 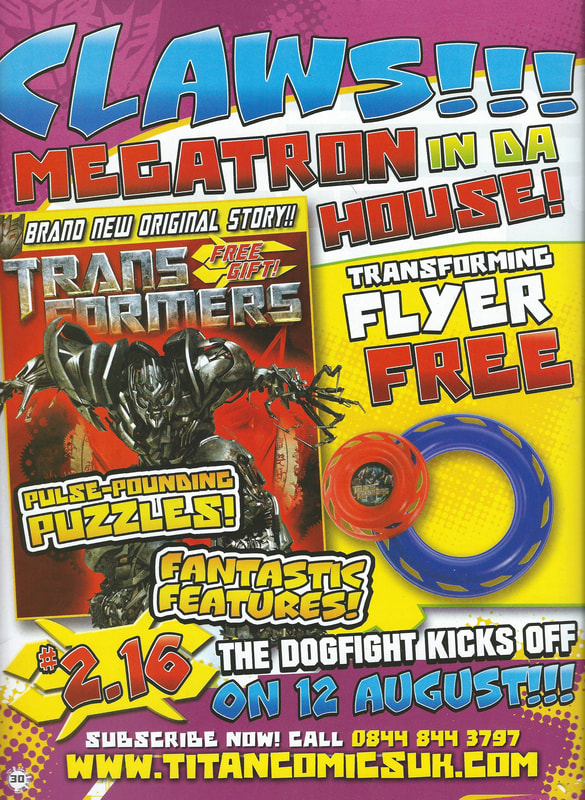