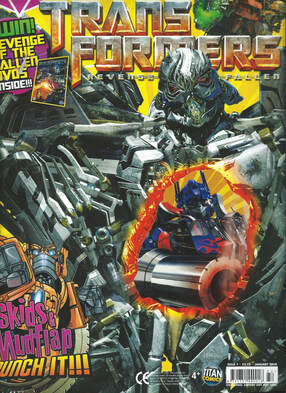 
It would be nice... to finally come in from the cold.

With Christmas about to drop, the comic gives us the gift of another oversized cover that makes the issue incredibly hard to scan. Because Steve White was clearly hating me through time.

In this case, the bigger size if both to add a banner promoting the win Devastator contest and to experiment with the cover art. The stock CGI of Starscream has a hole cut into that Optimus, posing on the first inside page, is firing his gun through the poor Decepticon’s guts. It’s a pretty good visual that makes for a nice end to the photo-covers for the moment.

The cover also tells us that the prequel to the film has now been running so long, it’s actually be overtaken by the DVD release of the film. 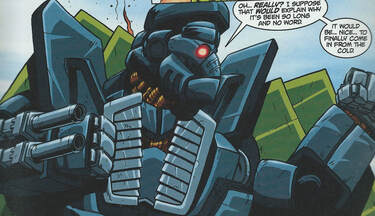 "Just give me a second to let my new paint job dry..."
We’re nearing the endgame though, and our penultimate story in this arc, Turnabout, with Soundwave killing the Twins so as to remove any potential threat their knowledge might have and...

Oh no, they’re dicking about in the Decepticon base (on Phobos for some reason), getting on everyone’s nerves and quoting Michel Jackson, before Soundwave sends them on a mission to bring Ransack in for some vague reason. Apparently because the Seeker is so dangerous it’s better to send in the canon fodder first to “Read the whirlwind”, with Sideways and Grindor there to pick up the slack if needed.

Which returns us to the cornfields and some more Hitchcockian imagery before there’s actually a nice little twist where, once Ransack recognises them, they just persuade him to come along quietly by promising the Fallen (who they know is an individual, something not clear from what they’ve overheard earlier, so they’ve gained even more knowledge thanks to Soundwave) sent them to fetch him. Leaving him delighted that his long wait is over.

It's taken 8 months, but something gripping is finally going to happen!
Naturally with a fellow Decepticon coming in to help out of his own violation... Grindor and Sideways attack, with the helicopter successfully damaging the Seeker and dragging him off... to where he was going anyway.

Sideways is less lucky, being knocked out. But rather than handing him in as the proof of their innocence (as was the plan) to the incoming and seemingly led by Dr. Mindbender NEST, they’ve decided they’ve had enough and are going to deal with Soundwave personally. Setting up the GRIPPING conclusion next month.

By itself this flows fine, despite being a tad slight. But in the context of the rest of the run so far, it is very much diminishing returns by this point. And for some reason, Ransack changes colour halfway through. 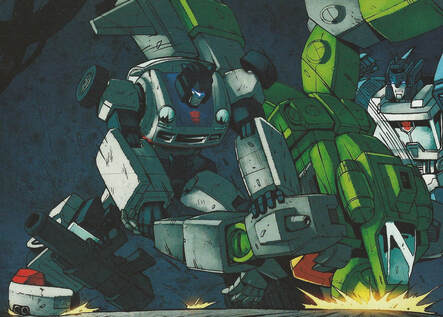 If you had a drink at every instance of team-mate violence in this comic, you'd have had four drinks by now.
All Hail Megatron gets an ! for its Titan given title, which is more exciting than anything in this concluding part of the original fifth issue.

Family Strife! refers to the Witwicky reunion, as Spike is called in to lead a commando raid into New York to get a Certain Thing that will never become clear to British readers but will stop Megatron. Whom Spike thinks is ugly, surely just to piss off the Stans reading.

Amazingly, it turns out you can’t sneak past advanced outer-space robot people in a boat, and we do get a great full page spread of Ratbat rising up out of the river and (seemingly) killing everyone.

Which leads to an anguished speech from Witwicky Sr. about how much he loved his dear son. Which is hilarious in retrospect considering IDW will later portray them as borderline loathing each other. 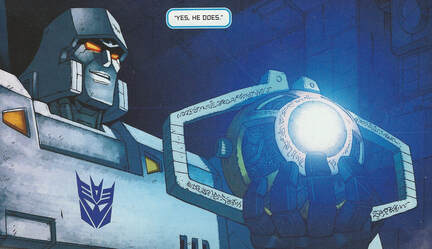 I was never going to bother with any of the Spike stuff tbh.
On Cybertron, just to get away from all this love and respect, we have more characters on the same side punching each other to assert dominance, in this case Springer and Jazz. Which is very old by this point.

A conversation between Jazz and Kup about Prime is slightly more interesting, especially when it’s revealed that Megatron has the Matrix. Which then cuts to a panel of him looking incredibly happy about this and not ugly, so screw you Spike.

Speaking of whom, in a cliff-hanger I don’t think will ever matter to the British, Spike lives! Because he’s just God Damn awesome. He just needs to get through New York and stop Megatron.

Not that we’ll ever see any of this. 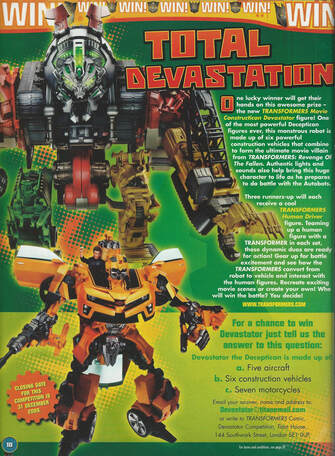 TOTAL
More Than Meets the Eye poses a series of questions that, when you fill in the answers and follow the highlighted letters, spells out a Transformer’s name (Sideswipe). Less taxing is sorting out a jumbled up cut up of Bumblebee’s face and leading the Twins through a maze.

The big ass cover promoted competition for Devastator (though runners up will get a “Human driver” figure) is the main news this month, with the question perhaps surprisingly being one of the simpler ones, just name what vehicles (the full size combiner not having robot modes for its components) Devastator is made of (construction if you’re struggling).

The other competitions can’t really compete, but include Astrosaurs Academy: Christmas Crisis by Steve Cole; Why Does Ear Wax Taste so Gross? By Michael Symons; Revenge of the Fallen on DVD; The Spooks Stories: Witches by Joseph Delaney; plus Teenage Mutant Ninja Turtles: Smash-Up and Academy of Champions: Football for (of course) the Wii.

The poster is actually a pretty good 2-D take on the cover, making a decent memento of one of the cleverer ideas the book has had.

Sideswipe’s Armoury is all about tanks this month, giving you the low down on the M270 MLRS; the M2A3 Bradley; the M1A2 Abrams and my personal favourite, the LAV-25.

Way Past Cool has all the best all the best (and by complete coincidence, Nintendo) games along with competitions for them, including Medieval Games; Combat of Giants: Dragons and Rabbids Go Home.

Law and Disorder (and the Star Prize spiel has finally been updated to not be about Starscreams) gives said Star Prize to four year old Ethan Merrie, who talks at length about how great the official Transformers website is, as any four year old would. 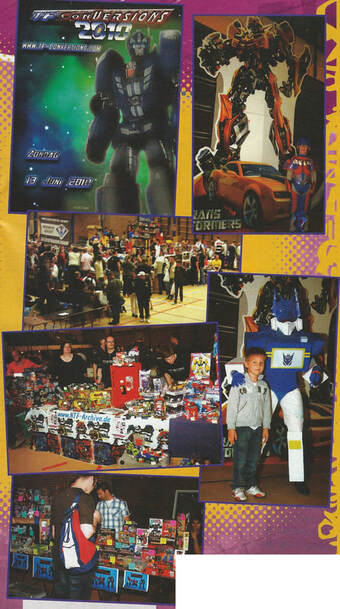 Con-life.
Abbie Hughes, 13 from Mancot, deeply distresses Barricade by sending in a drawing of Animated Bumblebee. “Why do I have to endure more pictures of this yellow cretin?”.

The big letter this month comes from Raymond T, Amsterdam, who talks about and sends in some pictures of ConVersions, a Nordic convention he helped organise with support from Hasbro. Even Soundwave paid a visit!

Starscream’s Stars clearly has it in for certain Wiki editors as Scorponok claims “It’s true that the winners always write history, but it’s the losers that do the Transformers Wikipedia page”.

The next issue advert talks about “Going out with a bang!” and “Our epic adventure reaches its stunning climax!”, which makes it sound more like a final issue rather than just the end of a storyline. And with the big budget cutting format changes that are coming, it may well have looked like it was going to be so at one point. 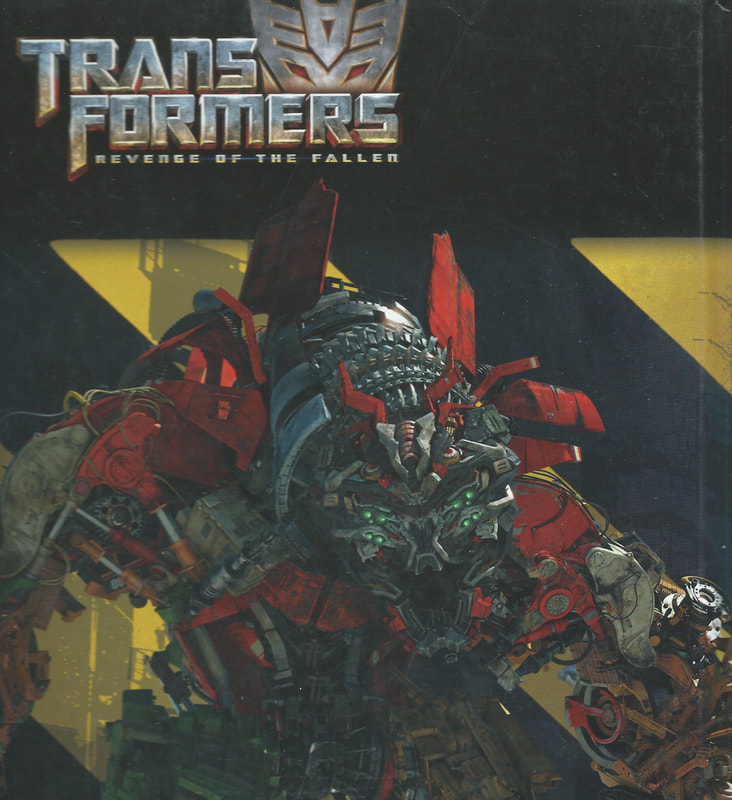