Say That Somebody Tries to Make a Move on You, in the Blink of an Eye, I Will be There Too. 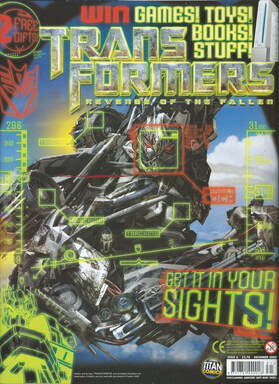 
Before we dive right into the bonfire night issue of 2009, a few words of thanks to everyone who came up to me at TFN to say “Hi”, much appreciated and hopefully I’ll have books for next year.

But, if you didn’t make it to the con, or were and missed either the prints or signatures, there’s another charity auction you can see me talk about HERE.

This week’s comic is the point where it does feel like there’s a contest to make the final cover as different from the one on the previous issue’s NEXT page as possible going on. This time the trio of villains have been replaced by just Starscream. 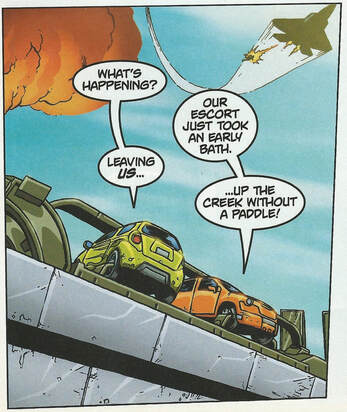 "Early bath"=Horrid death.
Part 6 of the endless Skids and Mudflap story starts by them being prisoners driven across Florida’s 1-95 bridge. Which looks exactly like the one in the Florida Keys than Sanchez is driven across as a prisoner in Licence to Kill. Though having checked filming locations, it’s not the same one used in the film. I’m not sure why not as there doesn’t seem to be any logic to the journey beyond the homage.

It turns out that either there’s been a big time jump since the last issue or Autobot justice is brutal as the Twins have been found guilty of treason and are going to be exiled into orbit.

So, right. Beyond the actual lack of evidence against them and there being no real clue as to how orbital exile works... Why are they driving through Florida? Where are they going from Diego Garcia? The films won’t establish the Autobots are dependent on the American space program till the next one, so it’s not even as if the thinking is they need to get down to Cape Canaveral. Though I suppose you can retcon it as such now. Though I’m not sure you’d get there from the Indian ocean by road rather than flying in. 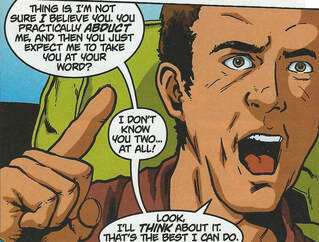 "I will think about it till five minutes into the end credits of the film!"
It turns out this is all about the Bond nods as, like in the film, the prisoner transfer becomes a prisoner escape. With Starscream and Wheelie (!) attacking the convoy, destroying the bridge and sending many NEST soldiers to watery graves. And just to make sure that you get that this is a Bond spoof, Wheelie says “Shocking” as he electrocutes two soldiers.

The whole thing is a scam of course, designed to make the Twins look even more guilty. Something that works as, back in Diego Garcia, Optimus declares the two are far more dangerous than they realised and must be stopped! Leaving them no option but to run for real.

All this means that they didn’t get enough of a trial to actually reveal any of the stuff they learnt about the Fallen under interview. 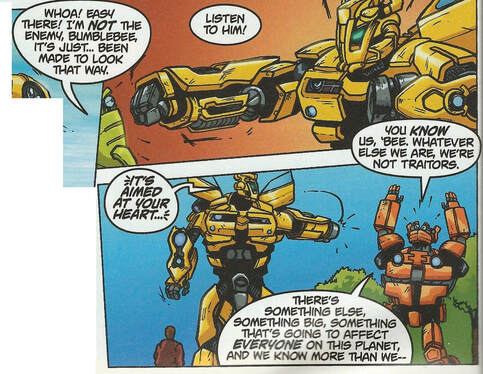 Bumblebee ready to execute whoever decided to have so many overlapping panels in this comic.
Being on the lam means finding someone to believe them, so they go to Sam. With possibly another time delay as they have to wait for him to go out without Bumblebee, in this case on a coffee date down the road with Mikaela. Who is bizarrely denied a chance to appear as Skids and Mudflap, having decided the best way to convince Sam they’re not traitors is to kidnap him from outside his house, roll up and shove him in.

Meanwhile, Optimus Prime gets a call from a Mr. S.O. Undwave warning him of where the Twins are and, though he’s cut off before we can hear him give the order to Bumblebee, it’s clear the Twin’s punishment has gone from “Exile” to “Kill the fuckers”.

Autobot justice is the sort that would make Trump look up from the dead body of Jeffrey Epstein and go “Wow, that’s not very due process”.

During that cutaway, it turns out the Twins have told Sam everything they know. Which is even more of a problem than them knowing as there’s no way he wouldn’t repeat it to Bumblebee, even if he genuinely thought they were full of crap.

Which is when Bumblebee comes in, quoting the Spice Girls no less (“Stop right now”), crashing into the back of the Sam carrying Skids with an enthusiasm that suggests he doesn’t really care about saving the teenager. So it’s lucky Skids has enough grace to eject him before shit gets real. 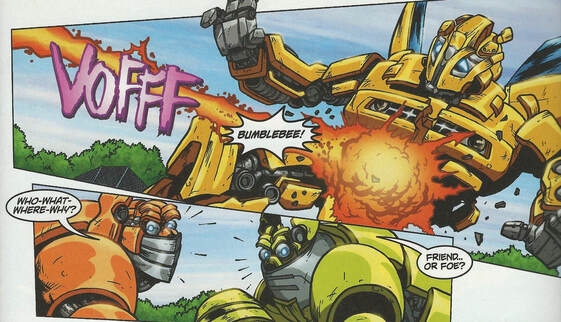 Bumblebee will never fuck again.
And as Bumblebee prepares to execute Mudflap (and it’s odd that the comic was so committed so saying the Autobots were only going to capture Grindor), the little yellow Autobot gets... shot in the cock.

Now, if damage to his throat stopped him talking, I dread to think what the long term consequences of this could be.

With Bumblebee down and out, Soundwave appears and offers the Twins sanctuary... which Mudflap accepts as he’s had enough of this planet.

GASP! The Twins... Autobots no more?

All of which would be much more dramatic if this wasn’t set before a film rapidly approaching its DVD release.

Still, this is a considerable step up, even if its hard not to feel the Twins could have just gone off with Soundwave at the end of the last issue instead. But it has decent pace and action (this is Davis-Hunt’s best issue yet) and the switch in location halfway through stops it feeling as stagnant as previous issues. 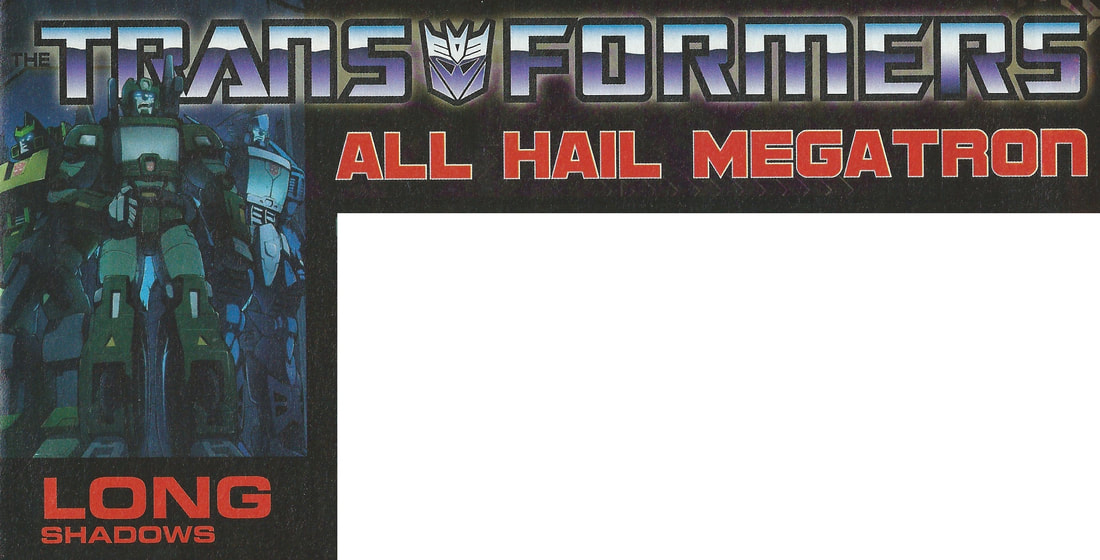 HOW DARE YOU BE UPSET AT THE APOCALYPSE
As we approach the curtailing of All Hail Megatron, it’s increasingly hard to care about the developments in it that will never be paid off as far as British readers are concerned. Still, if I put myself back into the mind-set of thinking this was a continuing reprint, there are some nice little moments here.

Not in the human subplot though. As Bridge (the token black guy) is struggling with the trauma of his entire life being thrown into turmoil and seeing so much destruction, Sarah insists he needs to lead them because God knows a woman can’t do it, and slaps him in the face before demanding he man up. Which, to be fair, feels like something someone also going through trauma would think is a good idea, but there’s been so much characters on the same side punching each other because manliness is Good that it’s starting to be a bit wearisome.

And there’s more to come as, when a team come to support Wheeljack and Bumblebee, Ironhide ends up decking the source of the disturbance... Hot Rod. 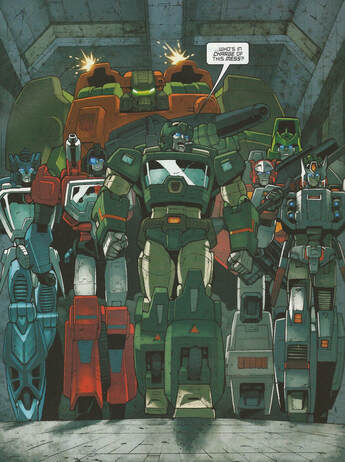 Bit of Drift for my pal.
There is one great gag here though. Hot Rod isn’t a rescue party, his own ship has crashed and he now thinks team Bumblebee are here to rescue him. You will instantly hear wah wah wah music upon reading the panels with everyone’s dropped jaws, and, like the flashing light last issue, is a joke that actually works. And was where AHM’s original fourth issue ended.

The fifth kicks off with a very nicely drawn space battle, showing how Hot Rod’s ship (he’s crewing with Blaster and the Wreckers, with the angles chosen to have one character smoking a cigar just be an extreme close up of their face, so Kup being there is a surprise for later because of IDW continuity at the time), under attack from the Decepticons and led into a trap in Cybertronian orbit.

Which is where all their computer systems go off, leaving the ship vulnerable, and quickly shot down.

The Autobots being plugged directly into their consoles is almost a nicely realised SF idea, until it turns out they feel the pain of any feedback. Which is a very stupid idea.
The long and the short of it is that the two teams have now merged, with this part ending on a full page spread of the Wreckers entering the room, led by *gasp* Kup. With the nice detail of Roadbuster being so tall his shoulders are scraping the ceiling. Plus there’s the first appearance of Drift, a key and very important moment for my friend Marian. 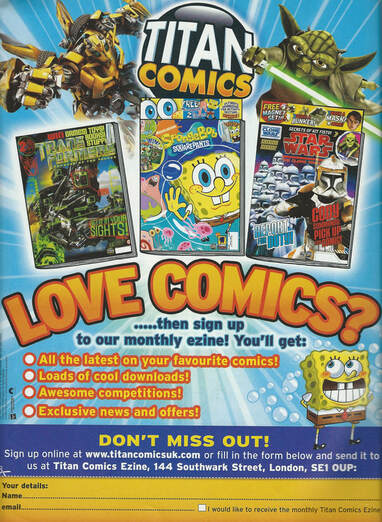 Send a letter to get on our website!
The editorial (following a two page advert for the Wii game Rabbids Go Home, which will again make my friend Marian happy) hammers home the dubious nature of Autobot politics with the heading Prime and Punishment!!, and calls the Twins “Scamps”. I expect last second word substitution. Weirdly the synopsis of All Hail Megatron makes it all about the Sir Not Appearing in This Issue Megatron.

LOVE COMICS? screams an advert for the Titan Ezine. Effectively an email newsletter full of promotion for their various comics. A sign of how we were still living between two worlds at this point, you can either join via the website or... cutting out a coupon and sending an actual bit of mail to get an email.

It was a different time.

More Than Meets the Eye reveals Ratchet is an incompetent medic as he has a whole load of body parts left over after surgery which you need to assign to the correct robot. You also have to work out which of four silhouettes is not Optimus Prime and fill out a fiendish wordsearch.

The big competition this month, in more ways than one, is a one metre tall statue of Generation One Optimus Prime that has a head that turns into PC speakers.

Which seems a bit excessive to me. He’d never fit on my desk for starters.

Past the poster (one sided this month, presumably because of the late replacement for the cover. The Wreckers are appropriate for the AHM representation though), other competitions are for an Eragon guide book (and copies of the original trilogy); Power Rangers Jungle Fury Solar Morpher and Jungle Tomah toys and a copy of Chris Ryan’s Code Red. Though the cover shown is of Battleground. A few pages on and you can also win Vs Warriors books that let you play pitting different historical solders against each other, with the sample page showing off the Spartans having art clearly traced from a publicity photo of 300. 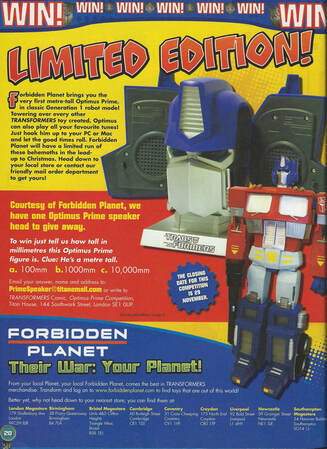 I think the salsa dancers at TFN were using these speakers in their room at 2AM.
This month’s profile is for Mudflap, though because the Twins are inseparable, there are several tiny Skids on the page.

War Paint gives you an outline of Megatron and, after explaining he usually has a face like a bucket of spanners, asks you to make him pretty. Hmm.
Law and Disorder is back to three pages and seems to now be trying to make a thing of readers having aligned themselves to either the Autobots or Decepticons. Which becomes a bit of a struggle as the unawares of this readers often don’t give any strong indication either way.

Most notable part of the page this month (apart from an excellent Ironhide drawing by Miss J. Tansley, age 21, from Woking) is 12 year old Charlie Seeley talking up the length of his time as a fan as if he’s a real old hand. Oh how I hate the young, why can’t everyone be old and tired like me?

Still, things are looking up for me as far as my Starscream’s Stars is concerned, it seems romance is calling.

Next week (and they’re not even trying to suggest a cover now), we end 2009 with the most important question of all...

Will Bumblebee’s cock be OK? 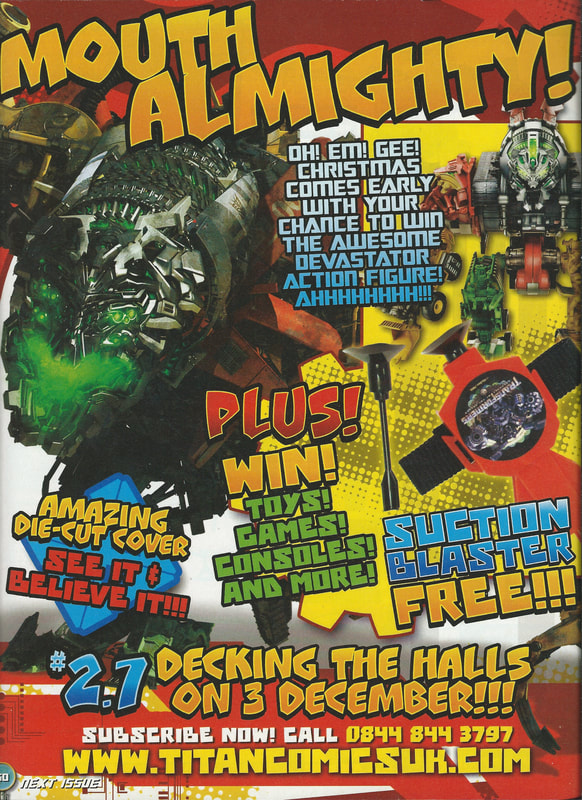