Don’t Us None of Your Aggravation, We Had It With Your Discipline. 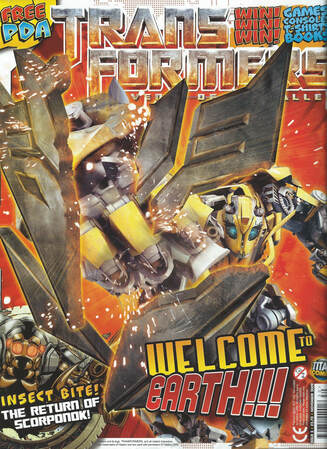 
The cover this month, once you’ve removed the (presumably) non-functional PDA, shows how you can be inventive with stock covers, making it look like Bumblebee is punching through the Decepticon logo alongside a cover quoting Independence Day (“Welcome to Earth!!”).

The sign of a sea change having happened since last month is the mention of the comic promotes the return of Scorponok. Meanwhile, the editorial page (Big Mouth Strikes Again!) focuses entirely on the Devastator profile.

It’s hard to be sure of the lead-time on the book. For IDW it usually works out about four months, though that can vary wildly if there’s a toy promotion involved, and of course, those issues are twice as long. But there’s a sense people involved in this comic have now seen Revenge of the Fallen, or at least the reaction to Revenge of the Fallen, and there is a dawning horror of realisation that they’ve backed the wrong horse when it came to picking lead characters. 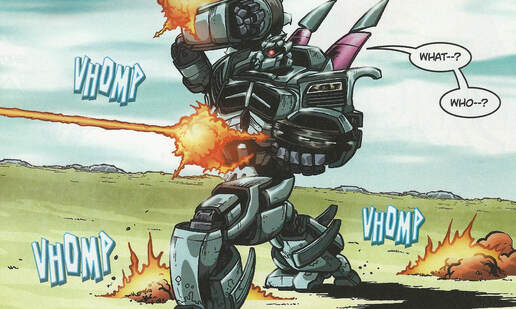 Sideways knocked sideways.
So Reversal of Fortune attempts to...well, reverse the fortunes of the book by opening with Optimus Prime blasting through the Australian outback in pursuit of Sideways. It’s a blatant attempt to capture both the feel of the Shanghai sequence of the film and the Decepticon, as it seems there’s no killing allowed here.

Prime has Arcee with him (and pleasingly there’s no attempt to explain her three form body change from the previous version. Though all she does is moan throughout before being knocked out near the end of the issue, so not quite as well rounded as before) on what is technically a NEST mission. Though continuing Furman’s odd disdain for them, they only show up to provide transportation after Sideways has been captured in a fun battle that allows him to show off some personality.

Though “Just ‘cause I’d always rather run away than fight, doesn’t mean I can’t!” reads suspiciously like a slight twerk of a direct quote from some character profile. 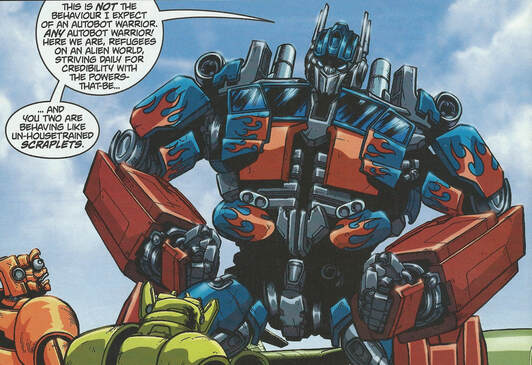 Tell how you really feel Simon.
At Diego Garcia, Skids and Mudflap are all excited to be meeting Optimus Prime, whilst Sideswipe is increasingly pissed off with them like he’s a character in a comic written by a man who has just realised how awful they actually are. The fact their attempts to warn people about the Fallen are failing on a Two Ronnies level of comedy put the reader more on his side than theirs.

Which is a sentiment shared and emphasised by Optimus as he and his prisoner arrive to find them slapping each other about. At which point he rips them a fresh new arsehole each about acting like “Un-housetrained scraplets”. It very much reads like Furman himself having a good old vent. Certainly up till this point I think you’ve been meant to read the Twins as endearing, this is all very much “Bloody hell, what dicks”.

Which is when Scorponok attacks and Sideways knocks out Arcee. And with our hero Optimus Prime having been absent from the comic for six months, patient readers are rewarded by him heroically...

Stepping backwards and falling arse over tit on Skids. 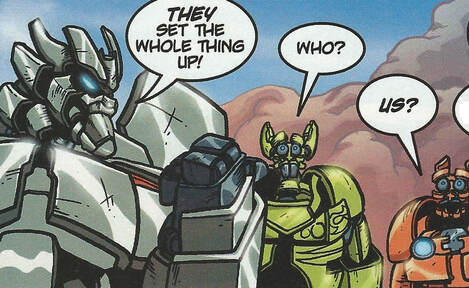 What obvious criminal masterminds.
Which the watching Sideswipe blames on Skids for some reason. He also blames Mudflap for Sideways grabbing a bit of rubble before he can and throwing it at the humans.

Which means that, when the Decepticons get away, Sideways blames the twins and calls them traitors.

Jesus Sideswipe, who hurt you? I don’t like the twins all that much, but they’re clearly innocent here.

Still, as we pull back to a room full of TVs observing the situation, Soundwave reveals this was the plan all along: That Sideswipe is inherently such a dick he’d jump to exactly the right wrong conclusion.

Despite the weakness of the Twins side of things, this is a big step up from the last two months, pretty much entirely because the Australian sequence is so much fun. It’s also largely irrelevant though, and Davis-Hunt’s art feels a bit more rushed than usual, with Prime doing some very odd kung-fu poses. 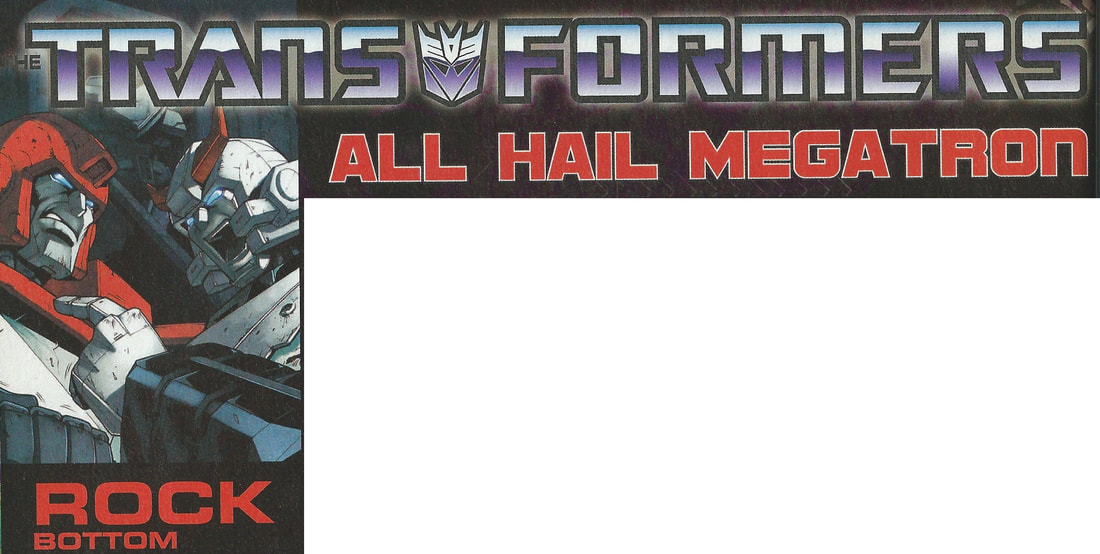 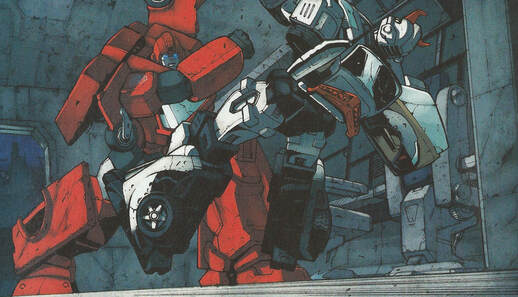 Before it was cool.
All Hail Megatron hits Rock Bottom, which may be truth in advertising. The original fourth issue opens with a three page speech from Megatron about how fucking great he is, but otherwise this is the Autobots’ show as we cut to a full page spread of Jazz looking out a balcony on the abandoned surface of Cybertron.

Which had already been established, so it’s basically a wasted page. Especially as there’s a very odd cut to Prowl and Ironhide in the middle of an argument. Starting a scene in media res is perfectly valid of course, but it feels more like Titan skipped a page. To the point I had to go check if they had or not (they hadn’t). It’s certainly an odd way to start the first scene with talking Autobots in what is supposed to be a fresh start jumping on point for new readers, giving as it does no real context to their characters or what they’re fighting (as it becomes when Ironhide decks Prowl) about. It’s all very bitty and unsatisfying. 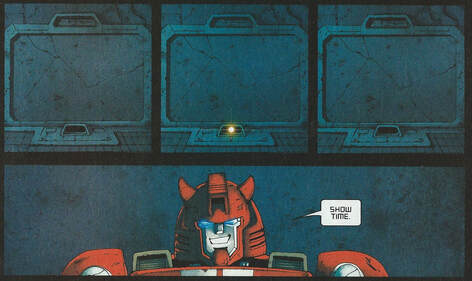 It's all downhill from here.
More successful is my favourite part of the whole series. Bumblebee and Wheeljack are on patrol when they spot life and, for technobabble reasons, the only way Wheeljack can radio for backup is to send a signal back to base that will flash a light on a console for one hundredth of a second. Which leads Bumblebee dismissing it by asking who in their right mind would watch a console for hours just on the off-chance of a one hundredth of a second message.

Which is when we cut to Cliffjumper doing just that as the light flashes.

It’s a good bit of daft comedy that also does some broad strokes character work for the three Autobots pretty neatly and means you don’t mind so much the issue ends with Jazz and Ironhide having a double-speak conversation about what’s going on that presumably, like the previous scene starting mid-argument, is meant to keep the reader clueless about things the characters already know so as to create a fake sense of mystery about things. 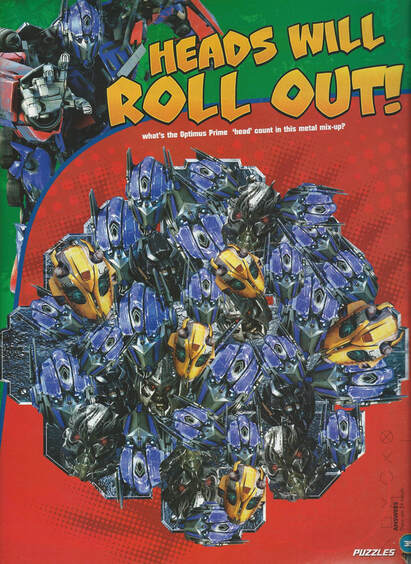 Make your own pun.
More of a sense of mystery is created from the extras, in particular the puzzle of why Sideswipe’s Arsenal has been renamed Sideswipe’s Armoury. Unless It’s to stop my football jokes. Whatever the reason though, he talks us through the following top USAF hardware: B-1 Lancer; A-10 Thunderbolt II; F/A-18E Super Hornet and the E-3 Sentry.

Boy there’s a lot of Alphabeti Spaghetti there.

Competitions this month include Bravado Transformers t-shirts and Ninja Captains on the DS (Nintendo have gotten their feet back under the sponsorship table). Plus, again on the former Top Gear section (so that seems to be a permanent change, did someone complain about that being disguised as a feature?), Merlin books and DVDs; Boom! By Mark Haddon and Z.Rex by Steven Cole.

The poster, because it takes one of the more conventional covers to issue 4, returns to rebranding All Hail Megatron as Revenge of the Fallen.

Heads Will Roll Out! asks you to count how many Optimus Prime faces you can find in a big ball also including Bumblebee and Megatron. And if they’re doing jokes about Prime’s face collection, the film has definitely been seen by this point.

As mentioned, the profile is for Devastator. And the cowards leave his scrotum out.

More Than Meets the Eye asks you to take Scorponok through a maze, spot Prime’s prime numbers and spot the differences between two pictures of Ironhide and Ratchet. This page also uses that Prime reaching with his hand out picture for the second time in the issue, making me wonder that was the only image of him Titan had. 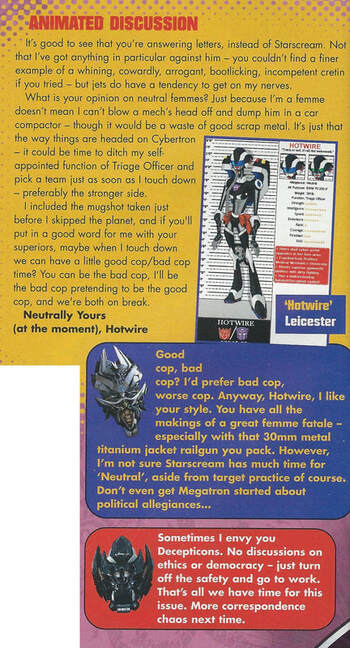 Get a room you two.
Law and Disorder opens by revealing Bumblebee has returned from a fact-finding mission with the information that Revenge of the Fallen was the biggest film of the summer (really bigger than a Harry Potter in the UK? Well, I’ll take Bumblebee’s word for it), though Ironhide calling Michael Bay “The most dangerous man on the planet” because “Things just seem to combust near him” adds to the sense the comic is feeling saucy towards the movie.

There are also pictures of the competitions of the ride in Bumblebee competition in issue 3, Sam and Olivia Tarling, plus of adult Anthony Fulcher cosplaying as Optimus Prime. For his kids.

The message for me from Starscream this month it’s time for a respray. Maybe flowers and cows as that goes well with my M-1 battle tank mode.

The big thing though is a letter, complete with character profile and art (based on Animated Arcree, presumably why the letter is titled “Animated Discussion) “Neutral femme” triage officer Hotwire. Who wants to know what they think about “Femmes”, and can she come play bad cop/bad cop pretending to be a good cop with Barricade.

For which he is well up for, the kinky sod.

What I am well up for on the other hand is TFNation 2019! I will be there all weekend once again. No books to sell this time (you’ll note I’m behind on Volume 3), but if you see me, feel free to say hi.

Next week, back on Friday, are the Twins traitors? 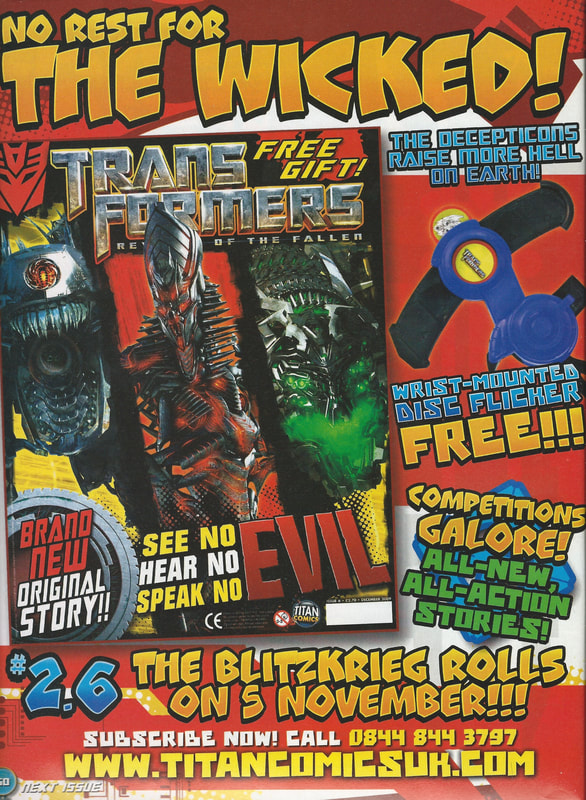