It’s Alright, I Say It’s OK, We’re Getting to the End of the Day. 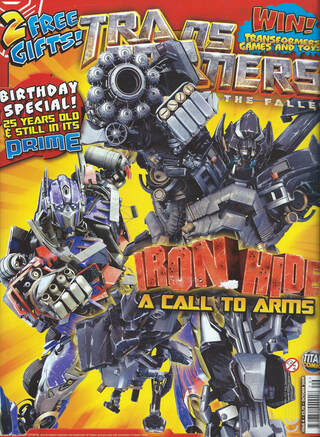 
But it got old, real fast.


*The comic has stopped calling the lead strip “Revenge of the Fallen Part...” and given All Hail Megatron a subtitle (it keeps the part number on the contents page, but not the strip itself).


Well, I told you Sideswipe wouldn’t make it onto the final cover. Instead we get Ironhide telling us what his favourite Babylon 5 TV movie is.

As a celebration of 25 years of the franchise, Prime and Ironhide are a little more appropriate than a one-line of dialogue only character, even if he’d have matched the contents better. 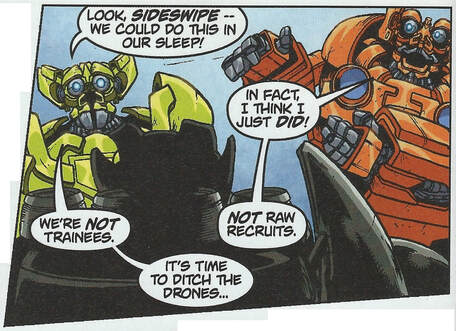 I'm still not entirely sure which one is Skids and which one is Mudflap.
New Tricks (Dennis Waterman, singing the theme tune ect. Though presumably it’s called this because Ravage is an old dog) sadly continues the downward trend from last issue as we open with the Twins training again, but this time at a new NEST base on the Orkney Islands. As Sideswipe chews them out over Grindor’s escape (or being let go as he thinks), Soundwave sends Ravage to interrogate the Twins and then kill them.

Ravage easily takes out Sideswipe, and is almost as easily able to bring down the twins, before they use the training drones against him. But when they take Sideswipe to where they left the four footed fiend, he’s gone. Meaning their trainer doesn’t believe them, thinking instead that they knocked him out for a jape and to get out of training.

Still, the listening Soundwave (who does believe in CCTV) finds the lack of faith in the Twins interesting...

This is the slightest and most padded issue of the series to date, as shown by the very fast synopsis. What should have happened is, after the opening pissing about with Ironhide in issue 3, then Ravage should have attacked. Which leaves the question of why Furman/editorial is dragging out the prequel stories. Especially as the first film only had six such issues.

There’s also lots of little details that are off. It should be impossible to write a one line of dialogue character like Sideswipe wrong, but a gruff Sgt. Major doesn’t seem right for a guy who looked to be having a ball roller skating about in Shanghai, especially as it’s exactly the same sort of personality as Ironhide has, adding to the feeling of one story stretched out to two. 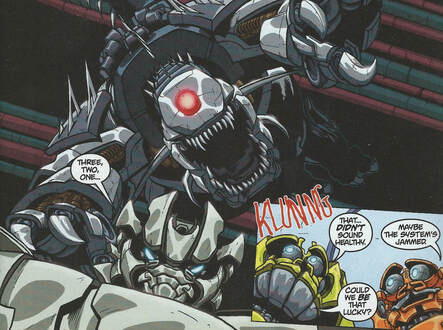 An old dog can learn...
Soundwave also continues to be Dreamwave Fallen lite with his ponderous dialogue (“They are in possession of sensitive details concerning the second coming of our master...” lucky devil at his age) and the Twins...

Well, look. I don’t mind the Twins in the film itself. Where they maybe get 30 minutes tops out of two hours of your life. Here, even at the accelerated rate I’m going through the series as compared to the original monthly releases, I’ve been stuck with them for four weeks.

They do just not shut up. Which, again, is just Furman working with what he’s given, though major characters from the first film didn’t get eight months (yes, we’re only halfway through) of focus and the banter is just very unfunny and tired and achieves nothing but making you think it’s not that implausible the Autobots would completely ignore them at every opportunity.

So what does work here? Davis-Hunt draws a great Ravage, looking like a snarling bruising nightmare that perfectly captures the CGI model. His Sideswipe is a little more off and the Twins have their helmets off for longer than previously, but overall it’s a strong issue visually.

Otherwise, the fact the comic is no longer giving sales figures on the contents page (they won’t return) feels like a more brutal summing up than I could give. 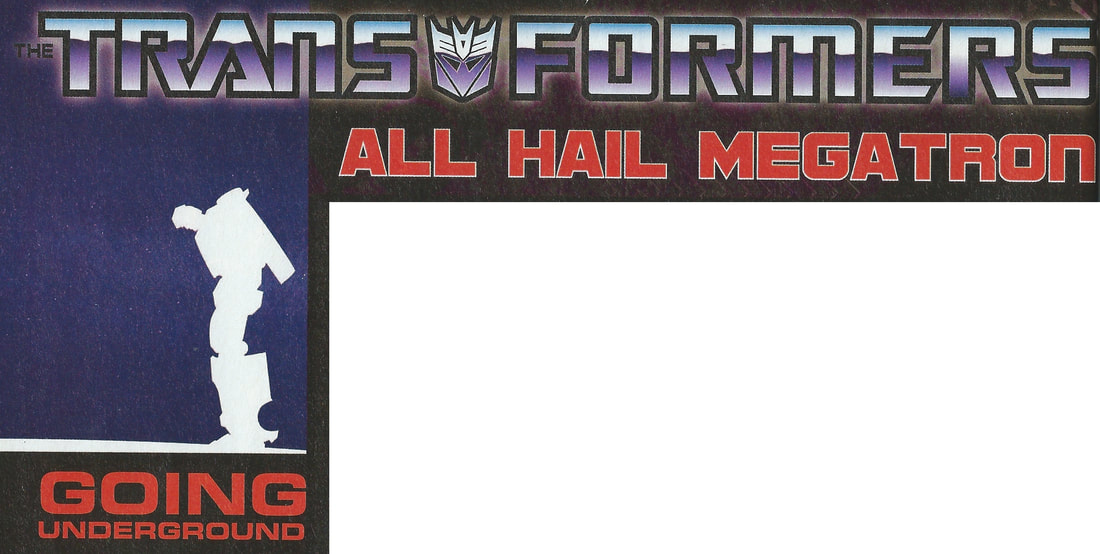 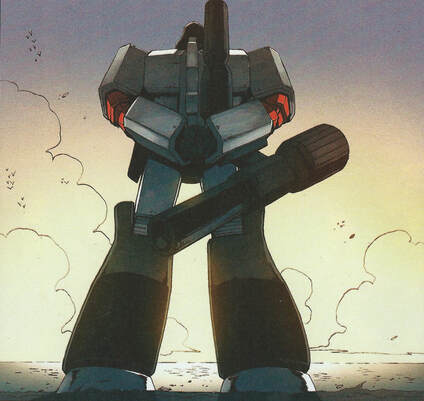 BROOD
Speaking of brutal summing ups, the fourth part of All Hail Megatron, Going Underground, has one solid scene where Megatron, surveying his domain, and Starscream (just come back from a special mission), talk about how finally getting victory can be an anti-climax and that Megatron actually does respect his lieutenant. It’s pretty basic stuff, but well done and with some nice visuals like Megatron taking a moment to polish his fusion cannon with a flag grabbed from a building.

Before this, we get Witwicky reacting in horror to the news that Air Force One has been downed (the thing Starscream was up to). Though why was the President flying about in the middle of an invasion?

Of course, this was horrific back when it was supposed to be Obama (as least when read in this issue in 2009, I think originally it would have just been Bush still), but these days it’s hard not to be on Starscream’s side.

The issue ends with the close of the third original part, bookending the subway scene we had last time. Andy has sorted out a group of survivors underground, training them with drills and even learning Ravage is a jaguar (which is a bit too specific for the gag to work, if Token had just said “Cat” it would actually be funny). But then Astrotrain repeats his trick, pulls in and—as everyone else runs—crushes Andy to death! 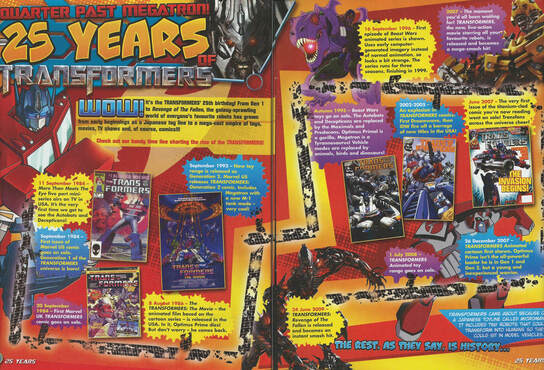 "Yeah IDW, we dissed you. Whatcha gonna do?"
The editorial (Born Supremacy!!!) is so excited about the 25th anniversary, it repeats the “Still in its Prime” gag on the cover. Though for such an audacious event, the number of competitions has been pulled back and there’s a surprising shortage of puzzle pages this month.

The main centrepiece is Quarter Past Megatron: 25 Years of Transformers, a potted flowchart history of the brand with some errors (it has the cartoon debuting before the US comic and misses out the Unicron Trilogy and Robots in Disguise), but as a bit of breezy fun for kids, it doesn’t really deserve the scorn the Wiki puts upon it.

Though it is funny that it conflate Dreamwave and IDW into one thing that run from 2002-2005. No wonder the IDW reprints wind up vanishing soon.

You might lose half this double-page spread if you cut out the Message in a Battle free gift on the other side of one page, a birthday card with Megatron jumping out of a cake with the slogan “ENJOY YOUR BIRTHDAY... OR ELSE!”

Which may be the greatest extra the comic ever did.

The poster just has Ironhide with no Prime on the cover side, whist the Trevor Hutchinson cover to All Hail Megatron on the other side has not been rebranded as Revenge of the Fallen as the logo is actually part of the art this time.

What competitions there are, are on what would normally be called Top Gear, where you can win Prime and Ironhide Voyager toys; Revenge of the Fallen for the DS; Changeling: Dark Moon by Steve Feasey and Dog Head by Jill Marshall books.

The character profile is on Ravage, which oddly tries to make you wonder if Ravage is sentient or just an extension of Soundwave. Even though the opening comic had Soundwave giving order and explaining things to Ravage as a separate being. 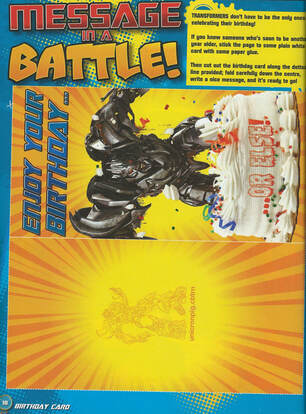 The only card I want this year.
Way Past Cool! no longer claims to be written by Bumblebee (though his picture is still front and centre), and talks about Wii Sports Resort (with our final competition of the month); Roogoo Attack! for the DS and Beatles Rockband for various formats. Yes, for several hundred pounds you can pretend to play John Lennon’s guitar.

Which Transformer Are You?! is our only puzzle page this month, a surprisingly hard to follow multiple-choice flow chart to find out if you’re Prime, Ratchet, Ironhide, Bumblebee, Wheelie(!), Skids/Mudflap(!!), The Fallen, Megatron, Soundwave or Starscream.

As a possible indicator of what the comic thinks of the leads forced upon it, the Twins are on the Decepticon section, sandwiched between Megatron and the Fallen.

The still two page Law and Disorder (I’ll only note if it goes back up again from now one) is all about the games. First Ironhide tells us how great Revenge of the Fallen on the Xbox 360 (has the Nintendo sponsorship run out?!), especially because Barricade isn’t in it. He then encourages Alex Butcher, 12 from Nottingham, to get lots of friends to play the online game with him.

This month’s star sign for me is “Behind every successful Transformer is Starscream. In the shadows. With a photon cannon”.

Next month, on a Thursday as it’s TFN time again... will there be more to say? 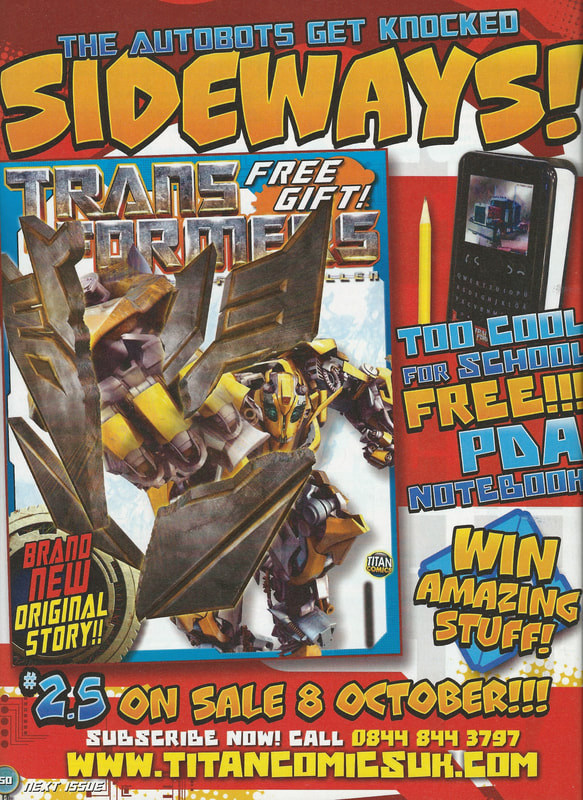