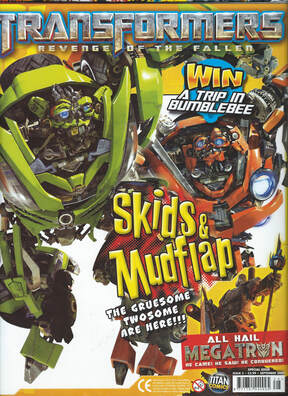 
‘Sides, you two have cried wolf so many times, even Prime has trouble believin’ you anymore.

*Still claiming to be Revenge of the Fallen Part 3.


Skids and Mudflap month three. With someone at Titan so convinced they’re beloved characters they even get the cover, proclaiming them to be the “Gruesome twosome”. Which is at least mildly more accurate about how most people reacted to them.

This is also the first issue to go for oversized pages, with the middle section on larger card to allow for some of the cut-outs. This will become a recurring trend (though sometimes it will depend on where you buy the issue), more usually with the cover. It’s annoying both in terms of storage and trying to scan the bloody thing (only the regular sized cover is to the left, the larger card gives it a banner boasting of the competitions and “Mega-Movie Mechanoid Madness!”), so apologies if things look even wonkier than usual. 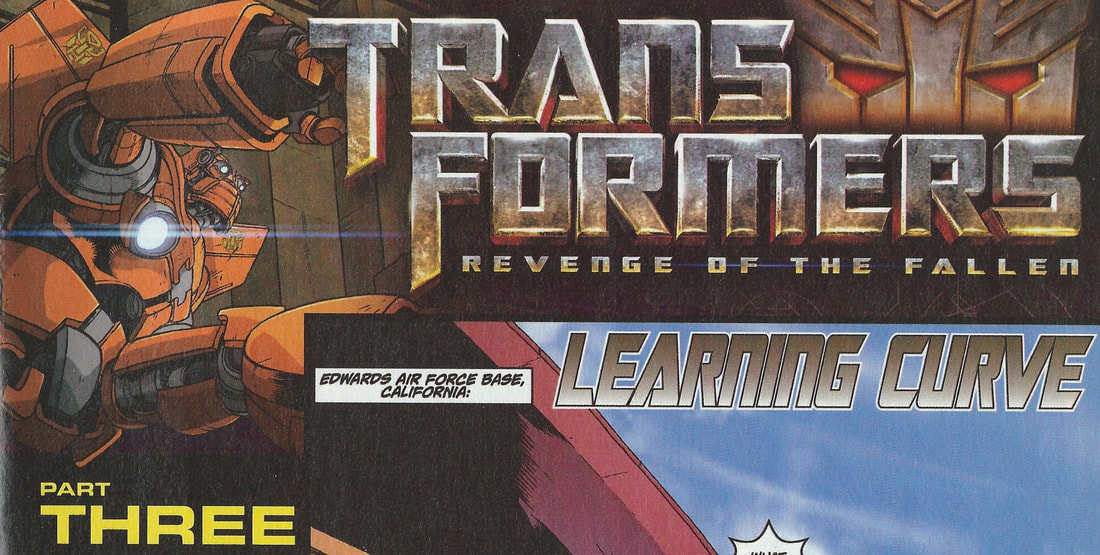 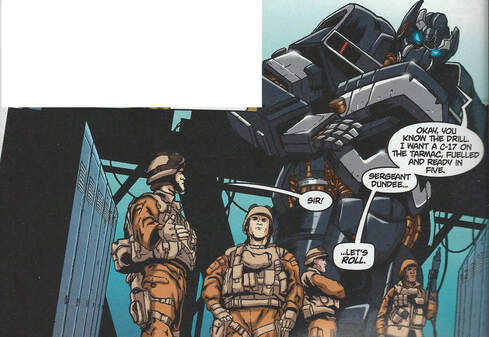 I sure love Sgt. Dundee.
Within, the Mega-Movie Mechanoid Madness starts with Learning Curve, which shares a name with the season 1 finale to Star Trek: Voyager, where some useless and much mocked members of the crew are put through a training program before proving their worth. Though it’s more famous for the ship nearly being destroyed by some over-ripe cheese.

Our first sign that this is not going to be the most dense of issues, is that three pages are given over to Ironhide chasing the Twins about Edwards Airforce Base as they try to sneak in and see Optimus Prime. With it turning out the initial reason for them not immediately telling everyone about The Fallen is they will only reveal the information to Prime, but no one will let them as everyone thinks they’re bullshitting dicks.

Which is a little contrived. Even if Ironhide’s tough major routine is fun.

The plot itself starts halfway through the third page, as, after it’s revealed Prime isn’t there anyway, a random NEST (appearing for the first time in the comic, though not named here) grunt reports a “Decepticon spark trace” in Las Vegas. Which results in Ironhide ordering the presumably Australian Sergeant Dundee to get a team together and head-out.

Grindor plays blinder.
It’s a puzzler to have all new human support here rather than using Lennox and Epps. Indeed, the regular NEST cast will only appear in strips not written by Furman, suggesting that for some reason he didn’t like either them or the setup.

The Twins want to come as well, but Ironhide remains contemptuous of them and orders them to stay behind (with a nice “Anyone ever tell you--?” “Not twice” exchange), though as they’re wacky guys they completely ignore this and drive off in pursuit after the military jet leaves.

In Las Vegas, Blackout repaint Grindor is on a mission from Soundwave. Who is talking exactly like Ransack/every Furman apocalyptic villain, going on about how “They will soon learn... this world was ours long before it was theirs”. Unlike the Fallen in the chair, it’s hard to give this an allowance for working from an early script as it’s hard to think a character who was clearly conceived of as “Throw a bone at the fans by bringing Frank Welker back” was ever going to be so verbose.

Grindor’s mission is to grab the “memory tree” from a sleeping and forgotten Seeker, which is odd as the poor guy who has his brain ripped out can’t know anything Soundwave doesn’t already know. 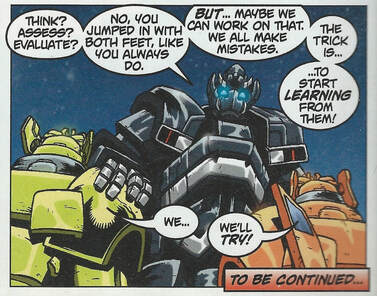 They sure are trying.
NEST arrives, a fight ensues, and they very nearly capture (note just straight up killing doesn’t seem to be an option in the comic) Grindor... before the Twins arrive and mess things up, allowing him to escape.

Oddly the previously gruff Ironhide is fine with this, telling them mistakes are fine as long as they learn from them. With everyone suddenly much friendlier the Twins now naturally hand over their information of the Fallen and... Oh wait, they don’t.

So, on the one hand we have the Twins failing to tell anyone what they know or proving their worth to the Autobots. On the other, we have Soundwave getting hold of a brain full of information that, at best, he already knows. Making this the least essential strip in quite some time and rather a limp part of the arc, especially with the rather padded opening.

Davis-Hunt continues to do fine on art, though his Ironhide and Grindor look a bit oddly proportioned and even he can’t do much with a couple of big close-ups of the Twins without their battle-masks. The big problem though, and possibly a sign he had to draw it quickly and without time for references, is that there's no sense of location. It might as well be Bromsgrove for all the feeling it gives of Las Vegas. At the very least, the actual films would never have missed a chance to have Ironhide loom over the waving cowboy. 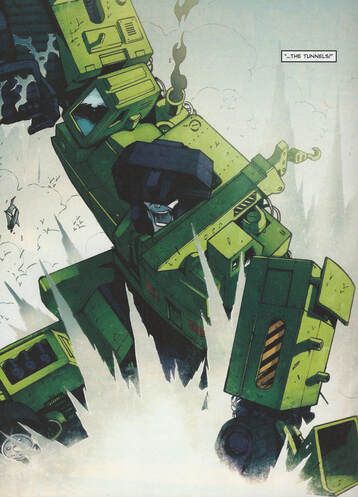 Devastator loves a paddle.
The 16 page third part of All Hail Megatron crosses from the end of the original second issue to the start of the third (which rather buggers up the narrative structure of the later, which was originally bookended with scenes in the New York subway that mirror one another).

We’re now firmly into the part of the comic where it’s grabbing you by the shoulders and screaming LOOK HOW ADULT AND GRITTY WE ARE in your face. With the cutesy G1 designs, suggesting that Guido’s art may actually be working against the intent, even if it’s still the best thing here.

So, as Andy and his new friends run through the streets, and Witwicky and Hawke (a G.I. Joe crossover?) spell out this is totally in continuity with the Furman stories by talking about the Machination... the Seekers destroy the filled with fleeing civilians New York bridges. Then the Constructicons combine, wade into the Hudson and punches the river bed, so as to collapse the tunnels. Also full of fleeing civilians.

Meaning, like Bane in Dark Knight Rises, Megatron now has the city entirely cut off and a base of his own. Though he’s also striking other cities as well, but the extent of how much the Decepticons wreck the rest of the world is going to vary a lot of the series.

The extent to which this brutality doesn’t quite work really hits home at the start of the third issue though, as we see a shell-shocked dad and his small son huddling with other people in the subway, before a train arrives and they think they’re saved... 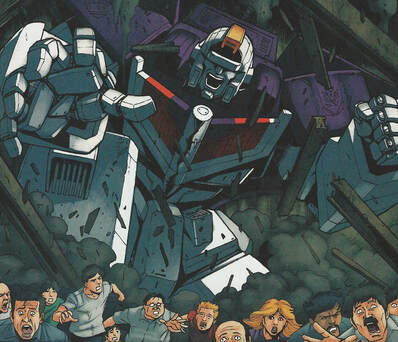 Booby.
Only it’s Astrotrain! Who transforms and looms over them before (presumably) crushing them all to death with his hands.

Astrotrain. Who once tried to take over the Decepticons with remote controlled steam trains. The guy Optimus Prime called a “Booby”. That Astrotrain. The Bay films make this sort of stuff work by treating the ‘Cons as giant scary monsters. You simply can’t do that with Astrotrain, lovable failure and doffus in pretty much his every other appearance. It means it doesn’t achieve the presumably intended horror, but instead becomes quite funny. You might as well have had Bungle come out and kill everyone.

Unless Astrotrain just gave them all a nice big hug?

After that, the issue ending on the reveal the US navy has been sunk can only be an anti-climax.

As well as perhaps not matching the intended tone, we do see one flaw in Guido’s art. Whilst he’s generally better at humans than a lot of Transformers artists, he achieves this by having about six different types of humans he’s worked hard on and draws over and over. So shell-shocked dad looks pretty much exactly like Andy (and indeed like Spike will in later issues), which confuses me every time when he suddenly has a son with him. 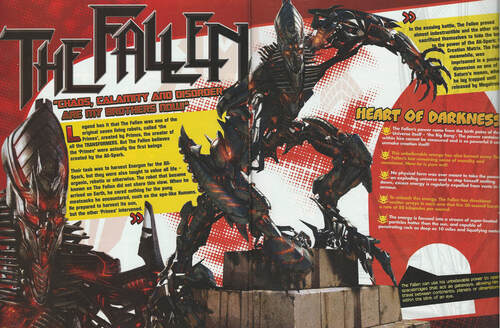 He's aged well.
The editorial (Das Bot!!!) tries to be cool and down with the kids by declaring “...to keep it rollin’, rollin’, rollin’ like Limp Bisket (sic)...” in a way that definitely needs a Steve Buscemi image reaction. More on the level of the editorial team is the promotion for Auto Assembly 2009. Where, as noted before, Titan put a great degree of effort into promoting the book.

The character profile goes to The Fallen, giving us more details on him than can be found anywhere else. Including the reveal (presumably a garbled left-over from Furman’s idea that the 13 were multi-versal) that he was born during the Big Bang.

More Than Meets the Eye has quizzes based around naming all the Autobots whose bodies have been cut up into squares, counting the Bumblebees in a “Fly’s eye view” and recognising which of a group of vehicle pictures is a real Transformer. Including a VW Beetle, which of course we all know will never be the alt mode of a Autobot.

Past the poster (an All Hail Megatron cover again), the bigger section includes cut out targets for the cover mounted disc-shooter watch, a door-hanger with NEST and Autobot sides and a Starscream glider. Though the most notable cut-out has to be a Megatron mask that would have been perfect to weak to Auto Assembly 2009.

The section also has a word-search, a combiner made of Autobots that asks you to name all the characters it contains (and gives a more convincing explanation for gestalts than Combiner Wars would) and Jetfire’s Jokes! Why is Optimus Prime always getting shot at? Because he’s a Prime target. 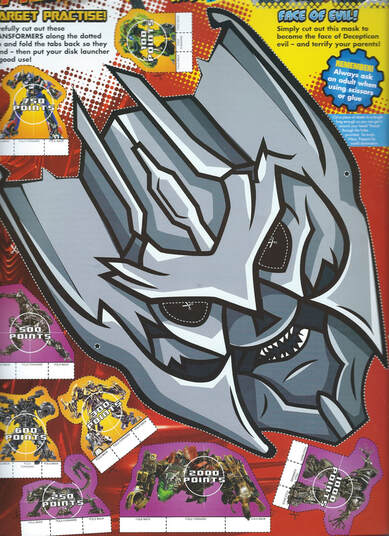 No one cared who I was till I put on the mask.
Back on the regular pages, Mode Mix-Up! asks you to match the Autobot to their alt-mode whilst Pop Quiz!!! sets some worryingly fiendish for kids questions (“Who voices Jetfire?”). Including the presumably result of a typo “How many members of the Fallen are there?”

Sideswipe’s Arsenal isn’t him showing support for his football team, but is a new feature talking about weaponry, in this case the film’s rail gun.

Competitions galore this month include a t-shirt celebrating G1 Jetfire... err... I mean the Robotech VF-1 Valkyrie; a chance to drive round London in “Bumblebee” to celebrate the launch of the RPM toys; Movie deluxe toys and—in Top Gear--Ghostbusters on Blu Ray; Gargoylz books by Burchett and Vogler (with a Sony PSP thrown in) and a H.M. Armed Forces walkie talkie set.

Law and Disorder remains two pages (perhaps the norm now?) and gives the star letter to Kyle Hampshire (possibly Kyle from Hampshire?) for his drawing of Barricade. But it’s not a fix, honest.

The real surprise though is that Barricade is able to answer the G1 cartoon questions of 9 year old Edward Johnson of Mistley (as he’ll now be 19 he is no doubt called Mr Johnson these days), naming all the Combaticons and explaining the plot of Triple Take Over. Someone must have the DVD collection to watch when not punishing and enslaving.

This month’s star signs reveal that I’m more likely to have a thorax problem than find love.

The back cover advert is especially of note this month as it’s for the tie-in computer game of a Hasbro film that has conspicuously not been mentioned anywhere in the comic despite the potential for cross-promotion due to the UK comic rights going to Panini. It’s G.I. Joe: The Rise of Cobra, and expect more on that very soon...

Next week... Well, I'll bet you now, Sideswipe won't be on the final cover. 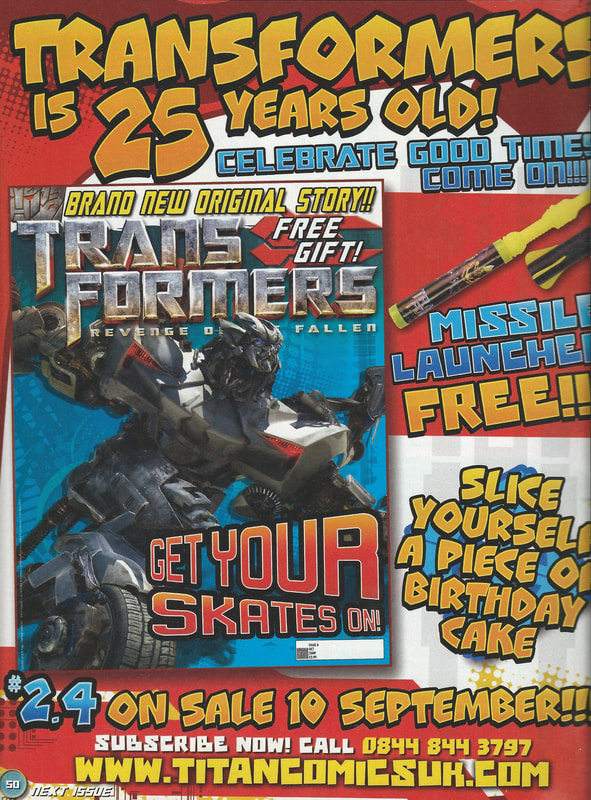