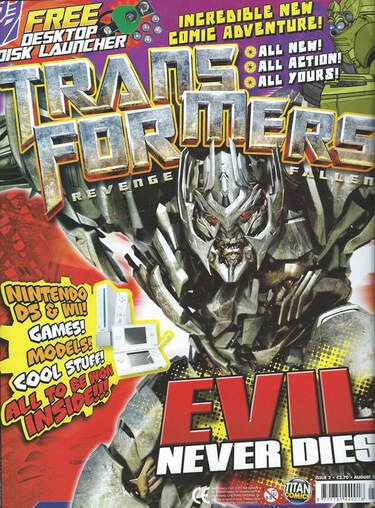 
Hope it wasn’t anything important.


*The new recap border makes it look like the story is called “Revenge of the Fallen Part 2: Dogfight!”, but as this makes no sense, I’ve ignored it.


This is a very exciting issue in terms of the history of this project, though possibly less so for you if you’re reading it at any point in the future. By being on sale from the 16th of July to the 12th of August 2009, this is exactly ten years old at the time of writing. Meaning that, going forward, I am talking about issues within single digits of age. The end comes ever nearer.

So, to go all Tardis Erditorum for a second, let’s look at the music and film charts for some additional context. Across July and August 2009, the number one songs included Cascada (Evacuate the Dancefloor), JLS (Beat Again), Titchy Stryder (Never Leave You) and, most surprising to me as it feels a much older song, the Black Eyed Peas and I’ve Got a Feeling.

Meanwhile, at the box office, with Revenge of the Fallen having had its two weeks early in June, Harry Potter and the Half-Blood Prince was the big film of the Summer, but Bruno and The Ugly Truth had a week either side, whilst just as issue 3 came out, The Time Travellers Wife was the number one film in the UK. Just to remind you all what terrible taste you all had.

I’d do the looking at the news thing as well, but do we want to be reminded of the time the worst thing in politics was us all thinking Gordon Brown had no mojo? 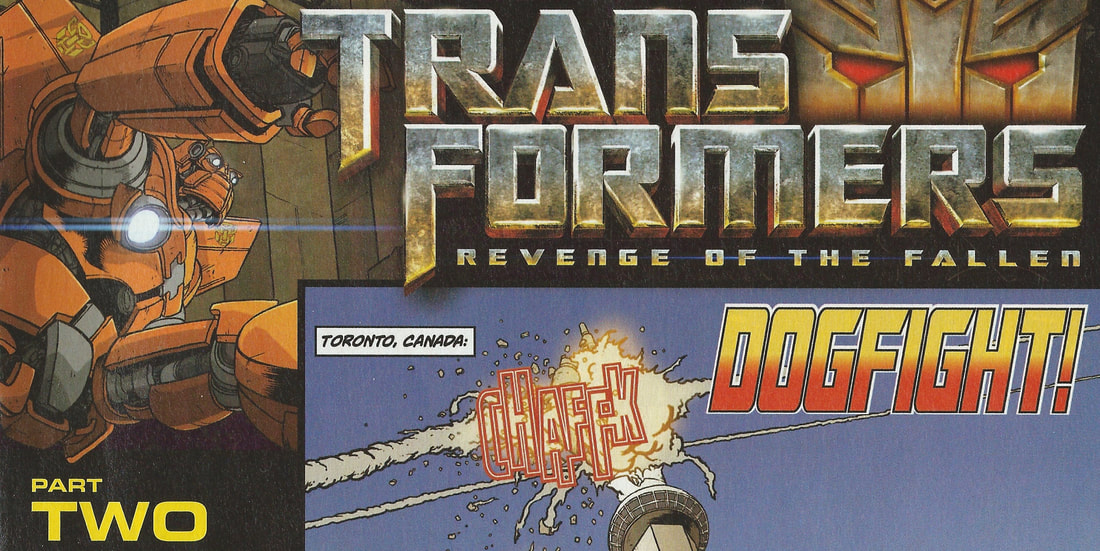 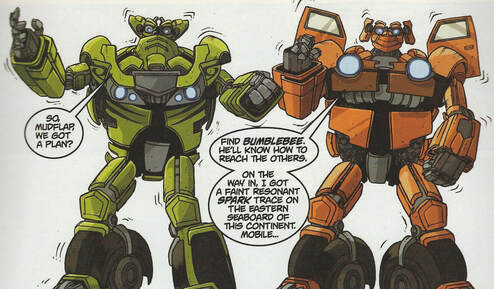 "So like they look in the film?" "EXCEPT THE FACES"
So, once you’ve evacuated the dancefloor and faced the ugly truth, what would have found in the second issue of the new Transformers comic?

With the stage set, this arc is going to follow the lose pattern of the opening of the first volume. A series of linked but roughly stand-alone stories where the overall theme is used to introduce and show off a new toy. But with the added element that the Twins are present, front and centre each time.

So their protoform modes crash through the tower in Toronto, where they’re horrified to be on a planet that has barely even invented the smart phone yet. Naturally with various Decepticons arriving and destroying things everywhere, NEST are immediately altered and mobilise to...

Oh no, wait, no one notices. 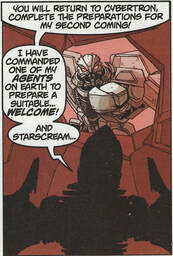 Last second addition ahoy!
The Twins instead wind up in the water and emerging at Ball’s Falls. Where they scan their fancy car modes from the film. Now, I get the desire to promote the more expensive toys, but boo to the cowards at Titan for not giving us seven weeks of a conjoined ice-cream truck.

As they go in search of Bumblebee’s faint spark trace (they last hung out with him in a smelting pool), Starscream is on the SPACE phone to the Fallen, where he’s told off for failing to stop Skids and Mudflap, and that his own agents will take care of the problem.

Probably the most notable thing though is that in the first panel the Fallen is still a pillar, but when we see his POV of Starscream on his TV, his robot mode is in shadow. I suspect this squiggly outline was added to the panel after the issue had been drawn to try and better match the final film.

Bumblebee 2: Judgement Day.
The Twins meanwhile are driving the wrong way down the interstate (now in the US) for laughs, presumably killing dozens of people in car crashes as they piss about. Which is where new toy character Ransack attacks them.

The non-film toys for Revenge of the Fallen are generally a bit more fun and imaginative than the first, with Ransack a highlight, taking the idea of ancient Seekers being on Earth (as did Hubcap) for an anachronistic alternate mode, in this case a biplane.

Over in Princeton, we get our first appearance of the Witwicky’s as Sam is having a look around and being embarrassed by his parents. Though as this is aimed younger, his mum is just trying to hold his hand rather than getting stoned.

It’s also our first appearance of radio Bumblebee in the British strips, and as in IDW all lyrics are changed for copyright reasons, meaning the gimmick doesn’t quite work. What does is a POV of his Terminator vision, revealing he’s constantly scanning things around him, looking for stuff to kill (“THREAT MINIMAL”).

Once he picks up Skids and Mudflap (oddly just their conversation rather than a radio broadcast), he naturally calls NEST and has them mobilise...

Oh wait, no, he just drives off to intercept them himself. 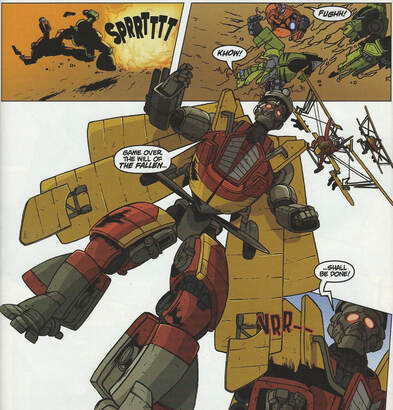 He's no James Mason.
“North, Northwest” (hmm) from where Bumblebee is, the twins are being chased by a biplane (hmm), which ends up a foot chase through a field (hmm).

How unashamed this homage becomes is actually great old school Marvel UK fun, with some lovely art by Davis-Hunt. Unfortunately Ransack himself is an extremely stock “I AM THE HARBINGER OF MY MASTER’S DOOM” Furman character that, after 12 months of The Ascending, is more frustratingly dull that entertaining, and it’s a relief when Bumblebee (who has driven the distance in the same time it took the Twins to run across a field) arrives and chases him off.

And by telling them all about the Fallen, Skids and Mudflap now know everything they need to make the movie an hour shorter. I wonder how that will be handled?

This is fine, but mainly for the fun Hitchcock homage and some nice art (though Davis-Hunt does struggle to make humans look like they’re standing naturally, one collage kid seems to be trying to invent the dab. He also carefully keeps the twins’ faces covered throughout, making me wonder if the couple of panels of them without masks in issue 1 was a conceit to toy advertising and the rest of the series will be firmly avoiding that problem) than the plot advancement. It really needs something to help it recapture the fire of the end of the last volume though. 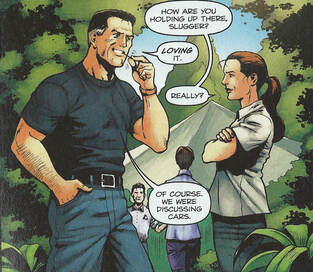 Arse McArseface.
The second part of All Hail Megatron is, despite promises, only 14 pages of the second issue, but it does set the standard for the rest of the series by veering between terrible moments, batshit moments and great ideas that seem to belong to a different comic with gay abandon.

We open with the first of those three states with the introduction of Colonel Daniel Witwicky. That’s right, little boy Danny is all grown up in this reboot, and a manly man’s man’s man who you’re clearly supposed to like for telling it like it is in a Jeremy Clarkson way as he mocks his wife’s wet liberal friends at a dinner party (though from a 2019 perspective, “GPS” being the sort of thing only a loser would have in their car is hilarious. Today Witwicky would probably look down on anyone who used Google Maps rather than a Tom Tom), before the President sends a big chopper to bring him to New York.

On the flight, Witwicky is annoyed with the CIA for having a chain of command they have to respect, and has one of his own men assault the agent because he won’t send his troops in without a full briefing in a way that’s clearly meant to feel like sticking it to the man, but just makes him look a dick.

Especially as he then sends his troops into battle without the briefing, and their smug assumption that only four Transformers can’t hurt them gets them all killed. 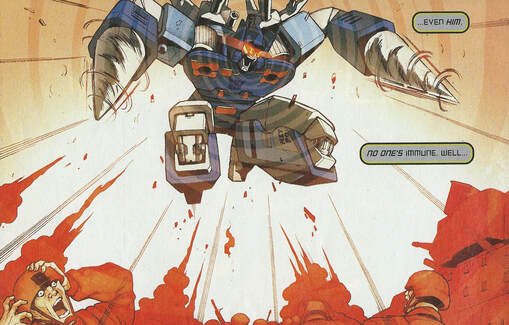 Me: Saturday night at TFN.
Meanwhile, in New York we get The Other USAF pilot, Andy Reid, running about and picking up other human characters who initially look like they’re going to be important, but will fade into the background as the intent for the series is very obviously reworked as it goes along in response to negative feedback. There is a nice gag of him mistaking Ravage for a dog, even if it is beaten into the ground through repetition, that I especially remember winding up certain fans at the time who didn’t realise it was a joke. Though if Titan don’t get as far as the pay-off, then Ravage is indeed officially a dog in their continuity.

The part ends with the cocky soldiers being confronted by Frenzy. Who has been reinvented as someone driven mad by their sonic powers, and is now a demented killing machine with drill hands and the ability to freak out everyone before... well, drilling them to death.

In what is otherwise a very trad take on all the characters (you have Soundwave—the only person actually immune to Frenzy—talking in his TV voice even though that doesn’t work in print), I’m not sure what made McCarthy decide to go down this road. And you can certainly argue (as Umar did on Twitter with me) that this is trying way to hard to be edgy and ADULT.

But I think it works, mainly thanks to Guido revelling in getting to do some nightmare fuel rather than the usual “Draw it like the cartoon mate” stuff he normally gets asked to do. And it makes an effective ending to the faux cliff-hanger. Which makes it a shame that this was one of the few bits of continuity John Barber would actually ignore when he simply had Frenzy be part of a Little and Large level comedy duo with Rumble during his “Hey, I’m funny like James Roberts!” phase. 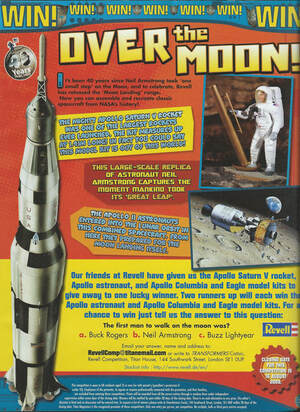 Ark not included.
Behind another cover mounted disc shooter, the editorial slips in a congratulations to John Davis-Hunt at the birth of his son, Freddie. That baby is ten now.

The poster is only one sided this month, the cover to issue two of All Hail Megatron. Which makes the Revenge of the Fallen branding a little amusing.

The character profile covers Sideswipe, and makes a thing of him having been built especially to fight, an idea James Roberts would run with a few years later. Though here it’s the coolest thing ever.

The More Than Meets the Eye quiz page asks you to name countries from the films based on pictures, spot the fake Bumblebee, invent a new colour scheme for Optimus Prime and spot the difference between two pictures of the twins (a fairly easy one as the colours are messed about with massively).

Why Jetfire Likes Being an SR-71Blackbird is, unlike the similar feature in the first volume, just a list of facts about the plane rather than a first person account by the character. Which is a shame as I’ve heard Mark Ryan talk about his pride at playing such an iconic aircraft.

Our fate lies not in our Starscreams...
There’s competitions galore this month, so take a big breath for...: Harry Potter Years 1-5 on Blu Ray; Lego Battles and a DS to play it on (we have to assume at this point someone has shares in Nintendo); a complete series of Spooks (as in the YA magic series, not the spy show with the bloke from Lifeforce) novels by Joseph Delaney; a Saturn V model kit in celebration of 40 years of the moon landing (featuring Transformers legend Buzz Aldrin) and—in Top Gear--Let’s Tap and Virtua Tennis 2009 for the Wii (see what I mean about Nintendo?).

With Law and Disorder we have our shortest letters to date, with only two pages. This means the one highlight is Ironhide revealing to Matthew Younger (4 ½, I suspect this is a dad again) that he likes Batman because his car can blow shit up.

Starscream’s Stars does reveal that the next time I take the path of most resistance I should bring a lawnmower though.

Next week, I presume Optimus Prime will find out all about the Fallen. 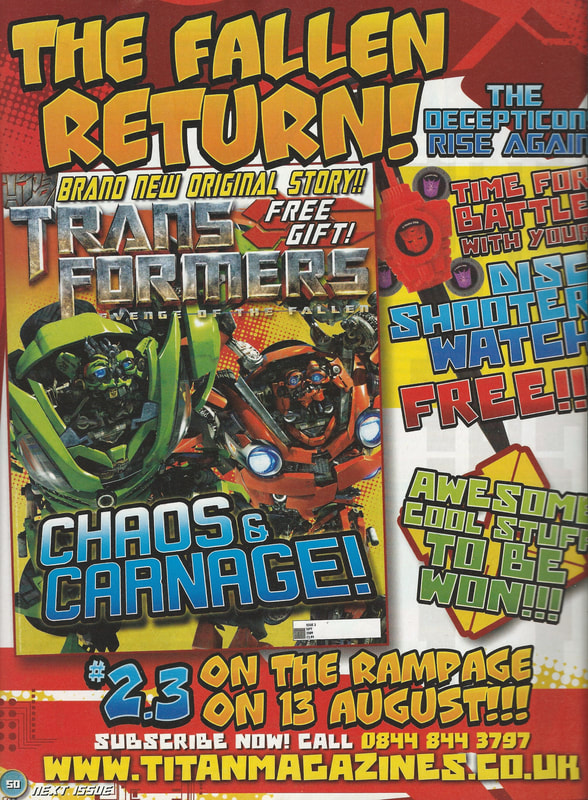