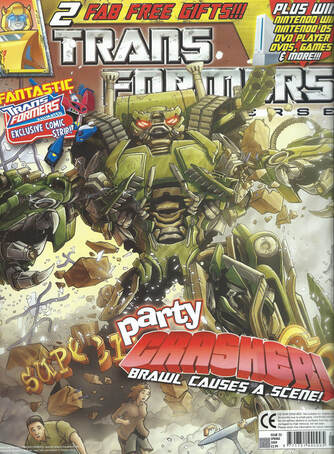 
Oh, hi Brawl! Yes, once again, every time I firmly say this character has appeared for the last time, there he pops up again, even on the cover this time. No wonder he’s causing a scene.

This is the real last kick of what can be considered the golden age of the book. Not just by starting the final arc of what is generally regarded as the best run of the series (which is largely why so many characters we’ve not seen in a while pop up for a victory lap, Barricade is present as well), but because it absorbs the remaining, unprinted Animated strips. Giving us 23 pages of original British content, a record for a British Transformers comic. The standing of which will depend on whether the remaining two Animated stories also have 12 pages rather than the usual 11.

That, plus the IDW reprints, makes this an incredibly rammed package for £2.99. 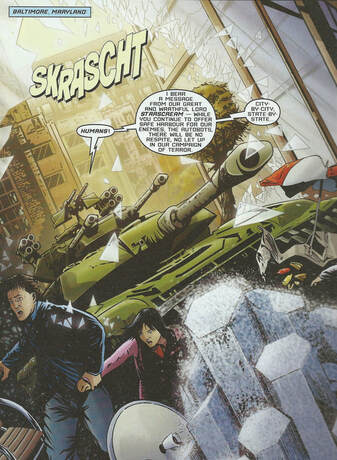 That's a scene alright.
Part one of Revolution has a certain familiar feel to it that I’d forgotten all about, and it’s one that is even more familiar a decade later as we open with Brawl making a scene. He’s rampaging through Baltimore, delivering a message that the Decepticons are happy to stay where they are within their territory... as long as the Autobots leave Earth. Said message being repeated by Wreckage (the first of a few characters to show up for the first time here as the comic takes the last chance to promote the 07 film toys. He has “Wreck” and “Rule” bumper stickers) in Pennsylvania and Barricade in a panel that’s too small for a location caption.

There’s something very familiar about all this.

Now, the advantage this has over some, shall we say, similar stories is that usually the humans look idiots for taking the Decepticons at their word. But here, they have the President (looking either like John Voight or a fat Tony Head this week, depending on how you feel), so when General Seward has to tell Prime that the decision has basically already been made, it actually makes sense.

And Furman is very good here, wringing some real emotion out of both the Autobots and the previously just sort of there General.

And even before they’ve left, Starscream (still talking to Megatron) has his troops ready to march out across the world. Including Crankcase!

Bumblebee filling that void in her life.
The seriously extends to Mikaela as she goes with Bumblebee to depart (in an Ark style shuttle), calling Allen a “Son of a...”, human mother presumably? Luckily Furman has decided things have been a bit too talky so far, meaning she’s interrupted by Dropkick arriving to “Escort” them, resulting in a car chase.

This is an awkward bit of the issue, Bumblebee still winds up where he’s going so it could be cut entirely and it feels like an opportunity to involve Jazz (who could have quite easily filled the same role, as the Decepticons proper aren’t supposed to be leaving the area they control yet, him being hired to collect stragglers would make sense) has been passed up to promote the newer toy. Who crashes and is presumably killed after passing a G1 Optimus Prime.

Who is making all these red trucks?!

Once we get to Andrews Air Force Base though, things pick up again. And also become very familiar again. The Autobots board their ship and leave (though with Prime promising that, if they’re needed, they’ll be back), and take off.

Only for President Allen to launch a nuke at the ship that—after a brief bit of interference on the monitors watching the launch (hmm)—destroys it, leaving Mikaela shocked and horrified. 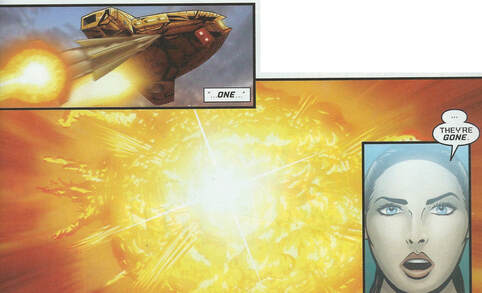 Now who will stop Sentinel Prime?
Yes, it’s the cliffhanger from the original cartoon episode Megatron’s Masterplan Part 1, but done more seriously and in the Bay style.

Two years later, Dark of the Moon will adapt this same plot, but more seriously and in the Bay style (said film also brings Cybertron to Earth, so the comic is certainly on the ball with its follow up ideas), with an almost identical scene with Sam in place of Mikaela.

Now this is interesting because the Bay films are often accused of having no idea about what makes a good Transformers story. And Furman, not least by myself more than once, is often said to be out of touch as a writer these days.

But here, both groups independently (though there’s an outside chance someone in the production office at Paramount who had to rubber stamp this remembered it and thought it was a cool idea) tasked with coming up with a follow up to the 2007 film hit upon almost identical ideas. To great success in both cases (especially Dark of the Moon of course, which represents the peak of the popularity of the films).

I guess they’re not so clueless after all.

Despite the Dropkick drag, this is a hugely impressive issue that’s almost entirely focused on character drama before its explosive finale. Couple with fantastic art from Lee Bradley (with some especially good colours by Jason Cardy) and the final story of the first volume starts off on a high. 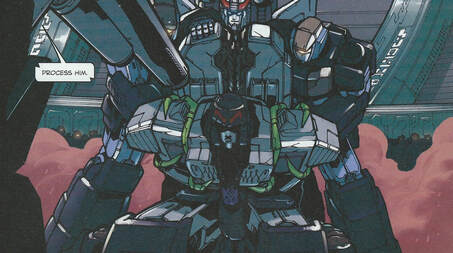 You're home early.
Megatron Origin ends its third issue with Megatron giving a big speech about how its time to end divisions and bring everyone under the one banner... before the Autobots storm the arena and arrest everyone.

Back at headquarters the cells are now rammed to full (getting deliberately arrested to fill up a jail to have huge numbers when escaping is a bit Buffy season 4), before Starscream gets let out by promising to tell the senate everything.

Gasp, has Starscream betrayed Megatron?! Come back next month to find out. 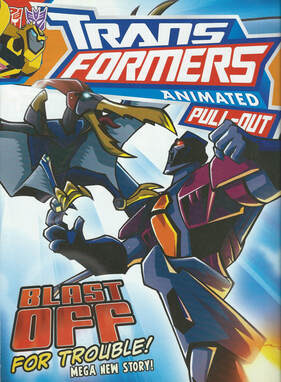 Faux cover.
Despite having an extra page, our Animated story, Divebomb feels much more slighter than the lead. Though that is perhaps an unfair comparison considering the original intended target audience.

So they can use the Nick Roche cover and one of the planned puzzle pages (Trans Doku), it is effectively presented as a pull out comic, with an additional story so far recap explaining the setup.

The story itself is, unexpectedly to me, written by Furman as well, hence that title for a Swoop story and an appearance by General Macadam.

Swoop has fallen out with the other Dinobots (with, in keeping with the ethos of the show, only Grimlock talking), is annoying the USAF by strafing their jets and accidentally getting pissed off by Optimus Prime when he tries to hang out with the Autobots.

Meaning he’s run off when Starscream happens to high-jack a new stealth fighter and set it on course for Detroit! Luckily Bumblebee finds the missing flyer, and persuades him to help, with the day being saved! 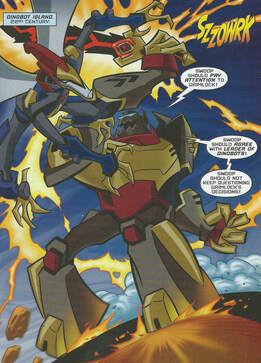 Grimlock's lightning fist.
Which takes us to page 11. Now, I suspect Furman wrote an 11 page story that was intended to stand entirely alone, but at some point (possibly when cancellation loomed, or even to make the transition to this book possible), it was decided to tie it into the Afterburn story. So, a bit about the red Autobot being away gets added to Bumblebee’s speech at Swoop, and an additional page (and I’m going to keep a close eye on the page count of the next two issues to see if it could have been moved from one of them) was added of Aferburn reporting to Megatron “Much later” as Bumblebee stumbles upon him.

Which causes an incredibly beefy Megatron to burst in and prepare to kill them both after being disappointed with the “Sparkless drone” for some time anyway.

Adding to the feeling of last second changes, the lettering in Afterburn’s “I think they’re on to me” report is much thicker than the rest of the issue.

It’s a fun little story that would have worked well in the context of its own issue, but it can’t help but get a little lost here. 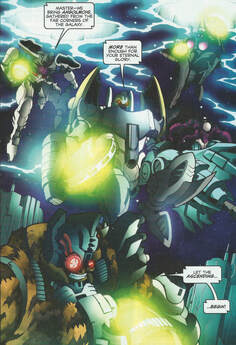 Oh, sure. Now it begins.
Beast Wars: The Ascending has one big surprise in store as it turns out Big Convoy is in fact still alive, showing how confusing I’m finding this comic by now.

On Earth, more Unicron controlled heralds turn up, meaning Razorbeast stays behind to stage a heroic last stand as those who are able scarper to Cybertron on the Pack’s ship.

Though it might be too late as we’re told “...Let the ascending begin!”.

A whole three quarters of the way into the comic The Ascending.

Amazingly, despite being rammed with comic action, there’s still space for filler this month. Starting with the Trump-esque Cybertronian Residency Exam. Apparently all you need to live on the planet isn’t a useful job or skill, but basic knowledge of the Transformers franchise, such as what the original Soundwave turns into or what star Cybertron orbited in the original comic.

The questions being geared to older fans might seem unfair on the younger, but as getting everything right guarantees your execution upon arrival, that might not be so bad. 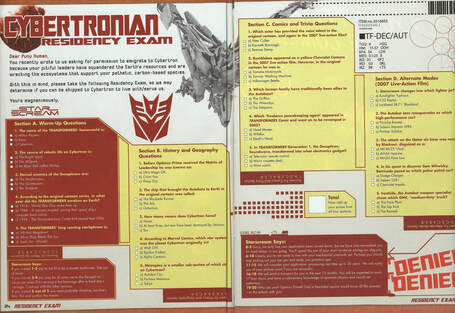 Looks like I'm living on Cybertron.
Competitions this month include Sonic and the Black Knight for the Wii and the Transformers bedsheets we’ve seen as a prize before.

Way Past Cool looks at Mario Power Tennis; B Team: Metal Cartoon Squad; Mushroom Men: The Spore Wars and Real Madrid. I’m not sure if he’s been credited before and I failed to spot it, but I’m shocked to see the reviews are actually by Ned Hartley rather than Bumblebee. That’s false advertising that it.

The character profile this month is on Magmatron, and is full of stuff about angolmolis energy if that’s your bag.

Top Gear looks at and has competitions for The Tales of Desperaux on DVD and Real Madrid and B Team: Metal Cartoon Squad for the DS (both also reviewed by Ned. What are the odds?).

The most amazing thing in the issue is the single laziest page in all comics... Artobots Assemble!, a page that’s otherwise blank bar the Autobot logo and the suggestion readers “Break out your pens and sharpen your pencils—here’s your chance to draw your ‘fav bots—or just have your say about the Transformers Universe!”. 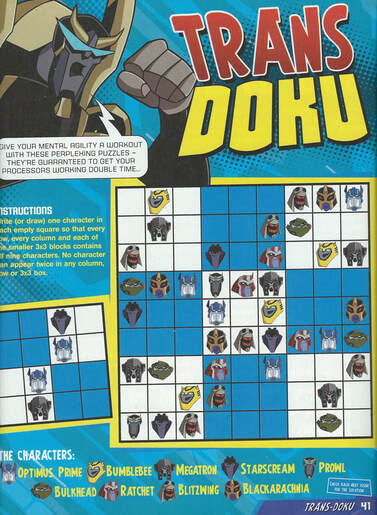 Prowl says,,,
At least the flip-side of the cut out and post in page has a caption contest for what stock art of Prime and Megs might be saying to one another.

Amidst this, it’s a quiet month for Starscream, though he does explain to Ryan Parry (10 from Hampshire) that the reason the scale of the toys is all over the place is due to Hasbro staff being overwhelmed by the awesomeness of Cybertronians, and the reason toys no longer have character profiles like in Ryan’s dad’s day is because the offer of an interview from Starscream to create one for his own toy was ignored.

And yes, more Arcee’s Soulmates, including a feline lover who still appreciates cassettes.

Next week... not much I guess, with all the Autobots dead. 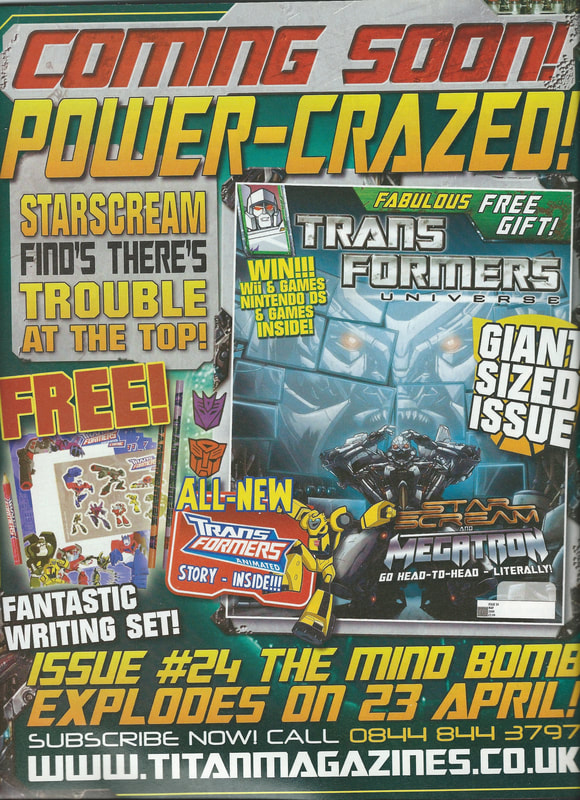