I Ain't Afraid of no Ghost. 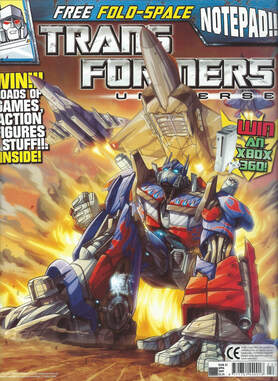 
Welcome to the all new, all exciting, all unprecedented... Transformers Universe comic!

Why the title has rebranded (the only time it did so without renumbering) to the name of the then current Generations toy-line just four issues before it rebrands again to Revenge of the Fallen is a bit of a puzzler. It may be because from next issue we’re getting the unpublished Animated comics and the title will now be embracing four continuities... but it already has three, so the change seems a little redundant. Especially starting with most of the new logo covered up by Starscream flying over Prime's head.

It might be the change was going to be a permanent one, acknowledging the film comic is just one part of a general Transformers package before marketing decided tying into the multiplex was more important (plus the re-relaunched comic will only have one other strip in it, making it less universal).

If you have any ideas, why not write them down on your free fold-space notepad? 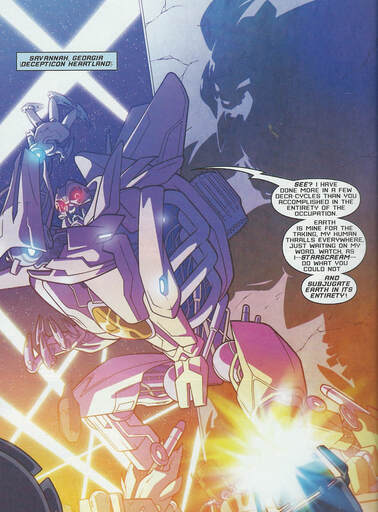 Star Wars: The Phantom Menace teaser poster (1999).
For the second month in a row, the lead strip is named for an old film, in the case Sir Roger Moore’s personal favourite of all his performances, The Man Who Haunted Himself. Which is of course the sort of detail that makes me very happy, even if I can say with certainty this time that it isn’t more than a cute gag, the film involving Sir Roger finding himself replaced by a doppelgänger that may or may not simply be him having developed a split personality after a car crash. Either way it’s a fun little thriller that’s well worth checking out.

In this story, Starscream actually isn’t haunting himself, but is rather facing the spectre of an old friend. Yes, Megatron, in a lovely full page splash where his shadow has replaced Starscream’s, is tormenting the Decepticon leader from BEYOND THE GRAVE.

I don’t think this was planned in advance as the reveal at the end of the issue depends on something we didn’t see back in issue 13, but it does neatly explain why Starscream has been talking to himself over the last few months.

The actual plot device here is handled well, we never see Megatron’s side of the conversation, but across the issue Starscream acts in a slightly contradictory way (going from being excited to seeing Prime arrive to being horrified any of the Autobots are still alive) that suggests he’s not just shouting at Megatron, but the Decepticon is speaking through him.

It’s also hilarious to see the other Decepticons, represented by Crankcase and Swindle, just shrug at the sight of Starscream having a one sided conversation with himself. 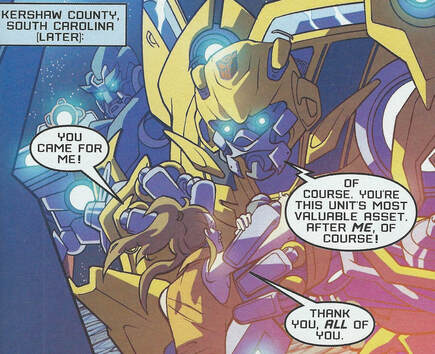 You're no Hot Rod mate.
Starscream’s dawning realisation at the end of the issue is the icing on the cake, as it comes to him that he’s not mad, things are much worse. He really is sharing his mind with Megatron after downloading what was left of him from the aforementioned not seen before Allspark interface module at the end of Twilight’s Last Gleaming. His horror is both hilarious and nicely sets up the final storyline of this parallel Universe arc.

And hey, Starscream is tormented by the ghost of a dead rival, everyone thinks he’s mad and talking to himself, but it turns out it’s not a ghost or madness at all, said spirit is still alive and coming back.

In just 11 pages Furman does the Starscream/Bumblebee arc from the second season of IDW’s Robots in Disguise that John Barber dragged out for years and years past the point of tedium. Presumably just a coincidence based on both writers thinking “What if Starscream was the guy with ghost issues rather than the ghost?”, but boy. There’s economy of storytelling and there’s economy of storytelling. 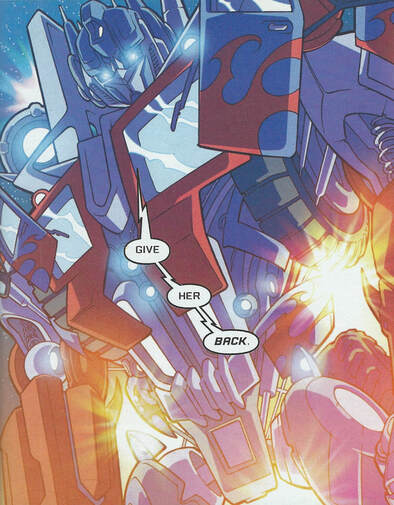 Crickey.
Of course, this is the framing device to a story that pays-off most of the ongoing plot threads, particularly the Decepticons having Mikaela.

Starscream assuming the Autobots will do anything to rescue her (meaning, interestingly, it’s Megatron who was in denial about them being all dead) turns out to be right, with a two pronged attack. The important part of which is Camshaft’s... Evac’s team rushing in and using a hypno-ray style device to break the now extremely pissed off Mikaela’s mind control before rescuing her. With a nice bit of characterisation for Bumblebee as he says before they get her that she’s the most important one of the team, but will only admit to her being the second most important after himself when talking to her in the aftermath.

The main event though is what is in theory just the distraction for this plan. As Optimus Prime, in an extremely pissed off mood, comes in on the Decepticon base in protoform mode and demolishes the entire building by crashing right into it. Before emerging from the flames with a cold blooded “Give. Her. Back”.

It’s one of the most striking images of the series, and this and the following fight show Bay Prime at his absolute best and most true to his on-screen persona. It’s also nice he isn’t so ridiculously tough as to be able to take on all the Decepticons, team Cam-Vac effectively saving his ass during their part of the plot.

So, with our heroes all reunited and the lead villain ready to return, the stage is set for the big finale of the book’s first volume. This is a great issue, nicely balancing its Starscream and action plot and with some lovely art by Cosmo White that helps to sell memorable image after memorable image. At this point, the comic is at the top of its game. 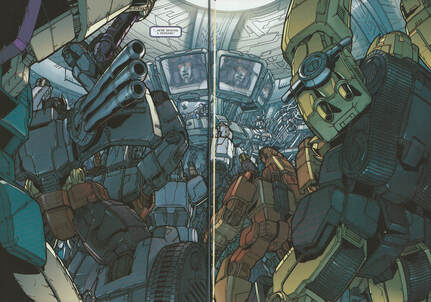 Dat ass.
Despite only running three pages shorter, it does feel like a lot less happens in the two backups this month. Starting with Megatron: Origin, where the Seekers grab Senator Decimus, Ratbat worries he’s made a bad choice and everyone gathers for a big gladiatorial match.

There are little bits of character work—Rumble and Frenzy being quickly scared into having their bodies modified into fitting into Soundwave, Sunstreaker being all about the fame of SPACE wrestling whist Sideswipe is concerned—but the main thing you’ll take away is the final double page spread where we find out that Grimlock is indeed dummy thicc. 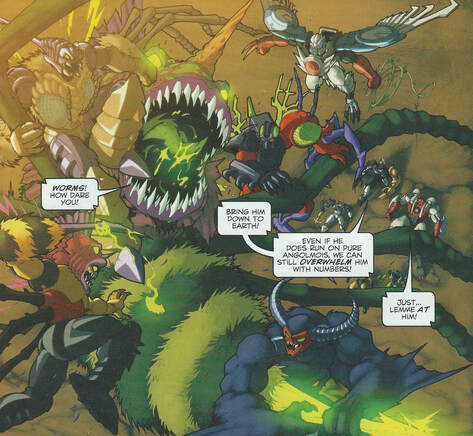 Worms.
The groan inducing highlights though is it being pointed out Injector and Rartorata are identical thanks to the insane decision to treat a toy released under different names in different countries as different characters.

Though frankly Rartorata is clearly the better character of the two as he gets to shout “WORMS! HOW DARE YOU!”.

The editorial is called Who You Gonna Call?, which is amusing though we should remember the idea of a Transformers/Ghostbusters crossover is of course very silly and should never happen.

Blast From the Past! is a competition for the Ultimate Mega Drive Collection on the PS3 or X-Box 360 that asks “Remember the ‘80’s?” before listing things like The A-Team and spaghetti hoops that still suggests the writers doesn’t remember the ‘80’s as the Mega Drive is a 90’s console.

The Character Profile this month is our long awaited look at Beast Wars Longrack. Who, it turns out, is basically IDW Ultra Magnus.

Top Gear is all about literacy this month, promoting and having competitions for Chris Ryan’s Vortex (presumably about the Combaticon helicopter torturing people) and Joseph Delaney’s The Spook’s Apprentice.

Artobots shows the Animated love isn’t dead with Sean Conway, 12 from Carrickmore, sending in a Starscream. He’ll be so happy next month. 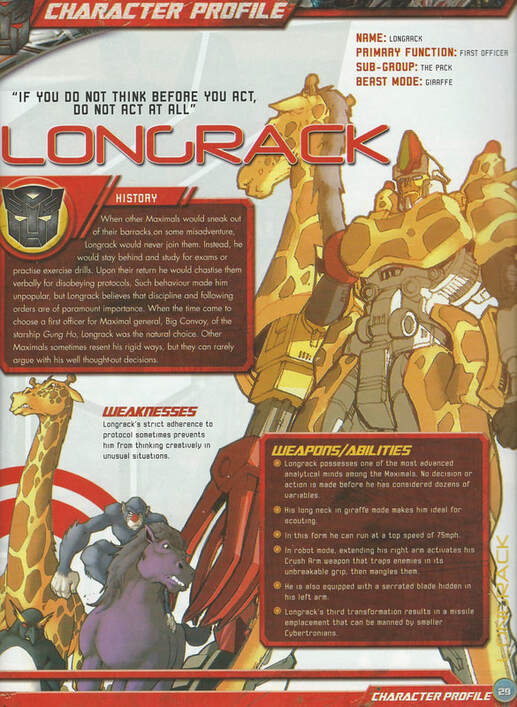 Look at the rack on that.
Our Starscream is able to tell Craig Stevenson (8 from Liverpool) that Revenge of the Fallen will be released on 26th of June, but he can’t say any more due to threats from higher-ups. He is however able to reveal to Thomas Mercer, 7 from Stalybridge, that he also collects toys. Of humans. He has a Thomas Mercer toy he enjoys putting in his gulag playset.

Starscream is most horrified however by Charlie Lister, 10 from London, asking if he has a girlfriend. What a disgusting idea.

Arcee’s Soulmates however shows there’s no shortage of transformers who want to fuck. Including a pair of twins (Skids and Mudflap?) who want a female Autobot to double team and a Dinobot with broken speech patterns who definitely doesn’t want any girls to reply, just other (at the time all male) Dinobots. 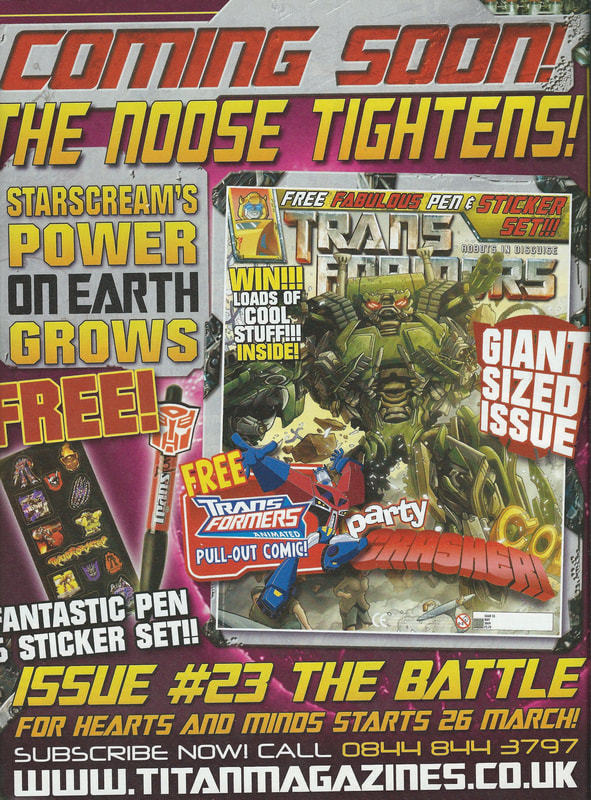