Bad to the Bone. 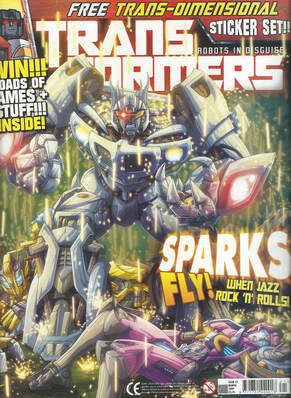 
Jazz is the name. Wetwork’s the game.


A Furman comic wouldn’t be a Furman comic if it didn’t manage at least one major dropped plot-line, and as we start on the transition to Revenge of the Fallen, we hit the main one of the Titan era. .

It’s worth noting that they were almost certainly expecting the second full year of the comic to be another 13 issues before relaunching to tie-into the new film. A slightly earlier release date for the sequel than the first film instead means only 12, meaning, despite being a successful comic in no danger of cancellation, another slightly rushed wrap up.

I could suggest from some of the signs of being thrown together in a hurry I’ll discuss later, this was realised between the comic being written and it going to print, just slightly too late for anything as simple as changing some of the closing dialogue to better wrap things up. 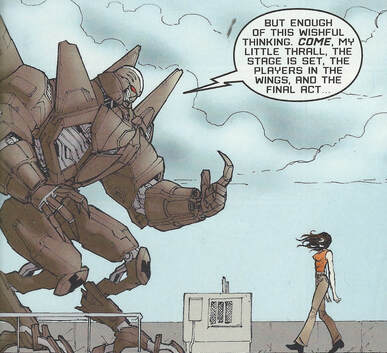 Best bit of the issue.
Hard Target (I’ve never seen the film, so I’m not sure if there’s any intentional homage here) is in and of itself the very definition of a filler issue. Indeed, if they’d known far enough in advance, it’s probably most of this one that would have been dropped.

Plot relevant stuff is mainly limited to the first four pages. This sees the Autobots return to their base (it’s not really clear where they got a new Straxus type shuttle from, they’ve not been in contact with Evac/Camshaft’s oddly absent team), only to find it under Decepticon control, before being driven off by heavy fire.

There’s actually some nice tension here as the Autobots realise they’ve been had, with Elita-One especially getting the most personality she’s had so far. The big moment, and most surprising for such a slight issue, is down below, with Starscream gloating over the mind controlled Mikaela, mocking the fight going on behind her eyes and her sheer desperation for the Autobots to come back.

This is pretty dark and bleak, with Casey Coller (or Collier as the credits have it) especially capturing her internal struggle well. 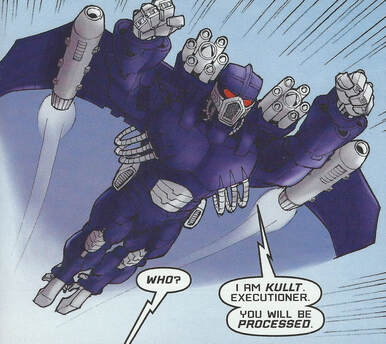 Ah, good old Kullt.
The Autobots retreat to Washington, where we do get some nerves over how they’ll be treated after seeming to run out on the humans, but Prime is simply asked to go to a private meeting with the President.

Which is where we hit the filler. They go to an abandoned factory and realise this is an odd place for a meeting... just as EVIL (and presumably hired by Starscream) wetworks fan Jazz attacks! He and Prime fight! They entirely new Decepticon Kullt (‘cause... Transformers fans are a kullt?) also attacks! Jazz kills him! Prime says this show’s there’s still a good Autobot under there, but Jazz insists he is evil and—as reinforcements arrive—promises he’ll prove it next time they meet.

They will never meet again.

And, despite some bluff claim of a fake message, this is where Prime realises their real enemy is the most powerful man on Earth.

After the strong opening, this flounders badly, especially coming off the last few issues. There’s nothing interesting in the Jazz/Prime conflict and Kullt is no Stockade. With no pay-off to the Jazz story to come (though of all the plots, it was probably the most sensible to ditch), you can safely put the comic down after Starscream leads Mikaela off. 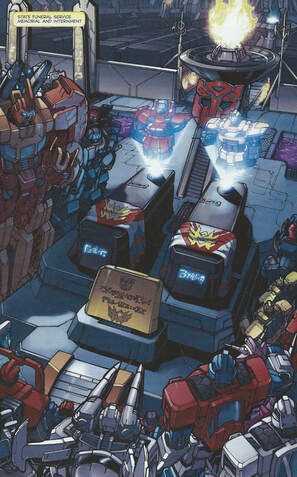 Ignore half these characters.
Megatron: Origin sees Soundwave introduce Megatron to Starscream for the first time, with some nice if unsubtle comedy as the Seeker fawns all over him.

This part is probably most notable now though for the full page spread of Fastback and Bumper’s funeral. For a comic a lot of later stories would jump through hoops to not directly contradict whilst still basically ignoring it, this has become a fairly heavily retconned page thanks to the mourners. Orion Pax might just have been there, but it’s now impossible for Elita-One and Ultra Magnus’ white inner robot to have attended. 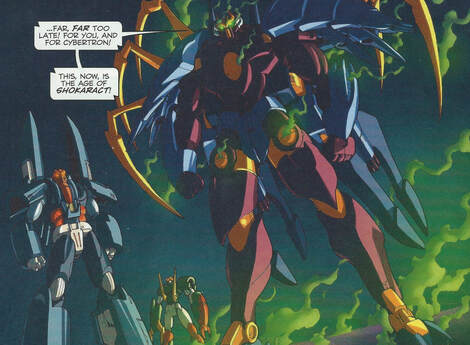 What an age to be in.
Beast Wars... Well, I’ve kind of lost track of the Cybertron plot. Though Shokaract gets to declare “This, now, is the age of Shokaract”. Which is nice for him.

On Earth it’s simpler as Razorbeast goes nuts. But in reality, pretty much nothing happens beyond the Pack deciding they’re going to kill him because they take care of their own.
Behind the free gift of some stickers, the editorial (Look who’s coming to dinner!) is full of enough errors to suggest that there was something going on behind the scenes that took the editor’s eye off the ball. The lead strip is called Return to Cybertron Part 6, and makes it sound as if Unicron has chased the Autobots back to Earth.

The recap on Hard Target also claims the Autobots have already saved the Earth with the nucleon. There’s literally no chance for them to have done this, so I suspect this was going to actually happen later in the missing issue, but with the reduction, it instead gets slammed into a non-existent gap.

Forbidden Planet (or rather For-Bot-En Planet) provide a competition for the Generations Acid Storm toy, which rather cheekily makes a big thing of what an obscure character he is. 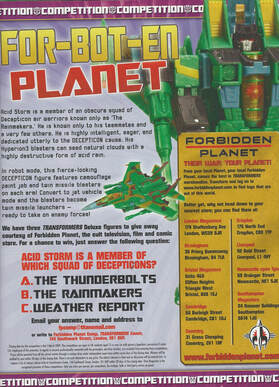 Prince's best song, Green Rain.
Barricade: 10 Reasons Why I Like Being a Saleen S281 reveals he mainly enjoys his police car mode because he loved police brutality.

Way Past Cool! Bumblebee’s Reviews ends its experimentation with criticism, providing only glowing reviews of Street Fighter IV (which is important enough to get onto the editorial page); Prince of Persia; Fun Park and Patapon 2.

Character Profile: Arcee is a bizarre mish mash as, despite being technically about the film version, the main art is of the G1 version. Presumably because of it being hard to find a consistent look for her from the comic. Indeed, one of the smaller bits of art is of Elita-One!

This means constantly changing her look and alt mode has to be written in to her profile, alongside quite an elaborate backstory of her being a guerrilla terrorist who was recruited into the Autobots by the never mentioned anywhere else Bayverse Kup.

Top Gear is devoid of Transformers merchandise this month, instead giving us PR and competitions for Dungeon Maker and Bakushow on the DS and Changeling by Steve Feasey and Dragon Keeper: Dragon Moon by Caroline Wilkinson books. 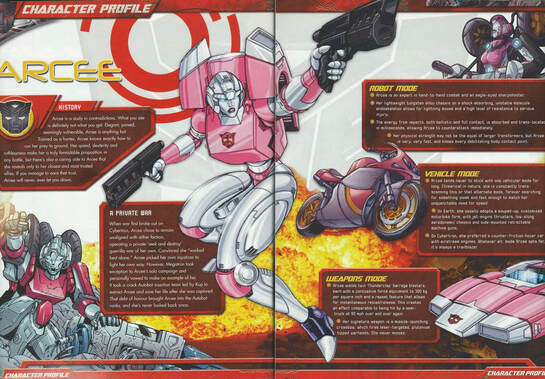 The many faces of Arcee.
Artobots is especially notable for Sharda Titre, 12, sending in a drawing of Stockade. Because we all know he’s that awesome.

Star Screams sees young cosplayer Daniel Bullard (6) show off his home made Halloween costume for his new Transformer, Rumblestorm. Which actually impresses Starscream, though he encourages Daniel to avoid turning to good lest he end up braiding some girl’s hair.

The mysterious Dave (age unknown, but clearly an adult fan), asks if nucleon will be creating Action Masters and whether the comic can come out more often like in the old days. Starscream reveals the former is down to the elusive Fur-Man and the later is unlikely as the human creative team enjoy their time in the place known simply as “The Pub” too much.

Something I never do of course. 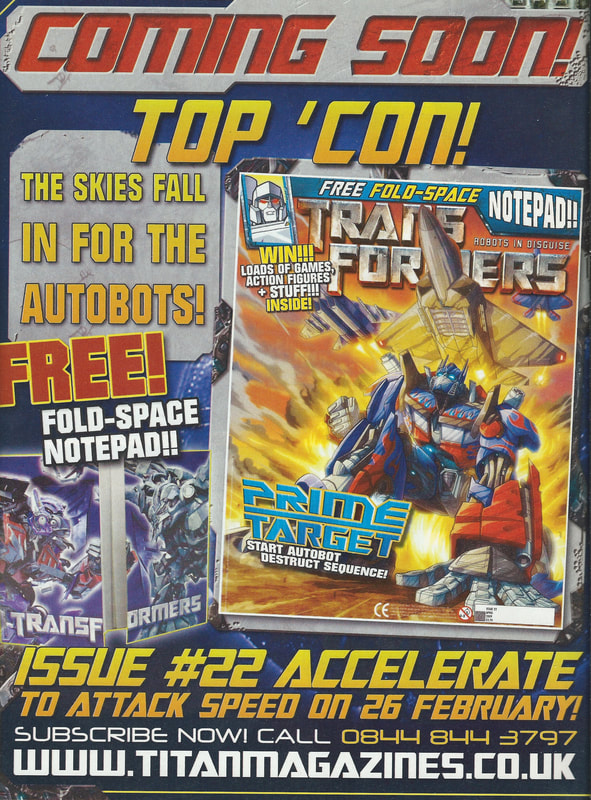