I Can't Believe My Hunger. 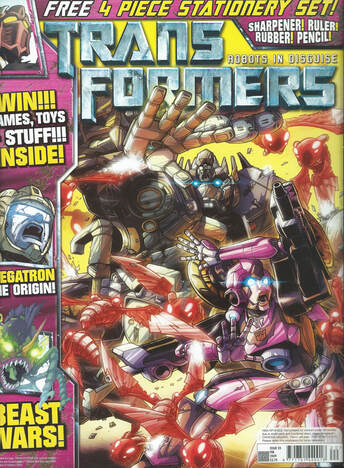 
That Mega-bazooka’s been with me since I was a proto-chip!


Well, it certainly feels odd to be covering a comic that’s only ten years old. It won’t be long now before I hit issues that were published within the life of this project.

The cover for the first issue of the year has actually been re-jigged pretty heavily from the one on the next month page of #19, with the image shrunk for a sidebar promoting the two other comics (and a promise of Animated news removed). This issue seems to have been put together before the cancellation of the Animated comic as #4 is still advertised, so this attempt to refresh the look of the series may have been inspired by the inside the front cover reveal of the sales figures for January-June 2008, down from the previous figure to 38733 per month. If so, it won’t stick though.

This is actually a pretty big issue beyond concluding the current storyline, Return to Cybertron Part 4 is, to date, the last of the series to have been reprinted. The three little mini Transformers Adventures books Titan put out cheaply and with little effort (one has Megatron Origin art on the back) aren’t interesting enough in and of themselves for their own entry. But they do present the last way of collecting the comic without tracking down individual issues. And even then, whilst the first two can still be found easily and with little effort in many a Forbidden Planet, the third is more elusive and may only have come out in a boxset that was heavily reduced in Tesco.

All of which means I am now into really uncharted territory for many people. 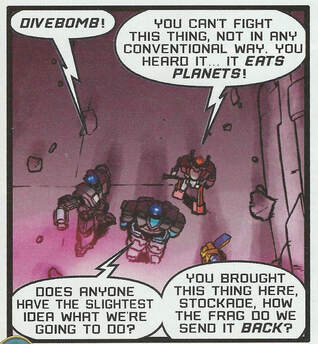 Sucks to be Divebomb.
Much like the Transformers on Cybertron in this issue, as their planet looms down upon Earth, showing that in space everyone can hear you give exposition as it gives a handy speech about being hungry.

This is so close to the visuals of Last Knight, I actually wonder if it might have been an influence on the film, just with the Prime idea of Unicron being Earth rather than Cybertron.

The New Decepticons, not particularly caring about Earth but still pissed at Cybertron being possessed, attempt to attack Unicron’s maw. And many of them get zapped as a result. Alas poor Divebomb.

The absolute highlight of the issue comes when Prime and his team arrive (having escaped from the Straxus before its destruction) and despite being on different sides, Optimus and Stockade quickly agree to team up and save Cybertron like the big damn heroes they are.

Prime and Stockade: The Ultimate Team Up.
The plan is simple. Unicron needs the nucleon to keep him going before he has the massive takeaway he’s licking his lips over. So Bumblebee will use the siphon he had on him for the task anyway to drain Unicron’s fuel, whilst majority of the team provide a distraction so the mysterious great big hungry thing won’t notice.

As they prepare to give Unicron “The worse case of indigestion in the galaxy” (Stockade plays with the Furmanisms, that’s the sort of guy he is), we cut to a page showing Starscream has established a Decepticon territory spread out 600 square miles around Savannah Georgia. Which becomes a subplot readers of the Adventures books will never have resolved.

Back on Cybertron we get our most straightforward issue for a while as the plan pretty much goes exactly right, even with Unicron throwing his (or Cybertron’s?) defences of killer robot bats at them.

More interesting is the cause of the distraction being a team led by Ratchet firing on what is exactly like the “Gyro-joint” of a giant Transformer within Cybertron. As the doctor says, the interior of the planet is amazingly like the inside of their own bodies. For a story that otherwise ignores previous takes on Unicron, this little hint of Primus (in particular the more familiar to kids Cybertron version) stands out. Though whether it was supposed to seed a plot that never happened or was just a throwaway thing is unknown. 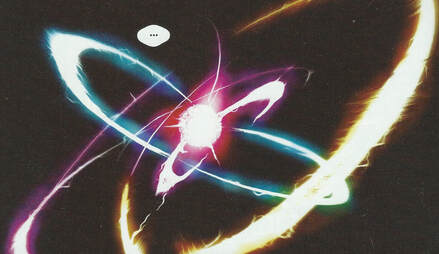 No hugs here.
Of course, Unicron just being starved of power wouldn’t be the Michael Bay way to end this, So we get Ratchet just ordering the opening of fire on a key part that blows up the remaining nucleon (but only after enough has been drained to save Earth), with a satisfying bang and light show.

And Unicron is destroyed within just 11 pages. Take that IDW.

The issue then ends on a nice scene where Prime and Stockade actually part on good terms, the Decepticon won’t come live on Earth as he’s still committed to Cybertron, but is happy to let the nucleon go in peace as he won’t let two planets die.

This has been an extremely satisfying and well done story, successfully juggling some complicated plotting, character work and a big all action climax. With Jon Davis-Hunt back and showing a stronger hand on art, if this was the last issue you’d read, it’s a good way to go out. 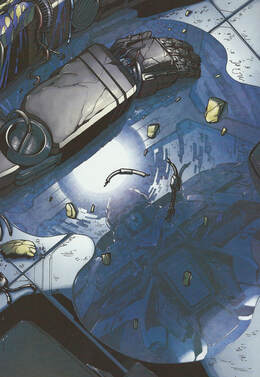 Looks like he hit a Bumper.
Megatron Origin ends its second issue with the pissed off gladiator finding the surveillance team of Fastback and Bumper and killing the former instantly before having Soundwave mind-read the other. And when it turns out Bumper knows nothing except Megatron is a psychopath, he gets ripped apart. But hey, then Megatron feels really sad about it as he looks in a pool of blood.

Most interesting thing here is probably that Fastback was going to be Outback until after the art was drawn and someone remembered they’d already killed Outback in a story set after this, meaning a last second name change and new colours. Poor Fastback, created just to die in more ways than one. 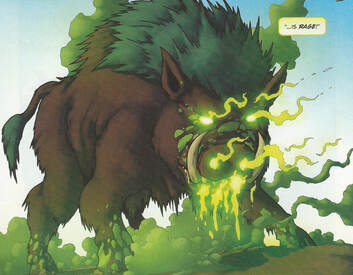 Bye bye best character.
Beast Wars also concludes its second issue, with someone forgetting to remove the “...Paydirt” that was moved forward a page last issue to stop it ending mid-sentence.

The story itself sees Leo Convoy and the Pack arrive and make short work of the Predacons, before Ravage appears and tries to warn everyone of the new threat. Which is then proven by Shokaract servant Rartorata materialising and biting Razorbeast, filling him with angolmois, turning the Predacon into a rage filled killer.

Which is how he’ll be spending the rest of the series before (SPOILER) dying, effectively removing the lead character. And indeed, pretty much the only goody with any personality. This attempt at a Psycho twist might be surprising, but it’s not going to be good for the comic long term. 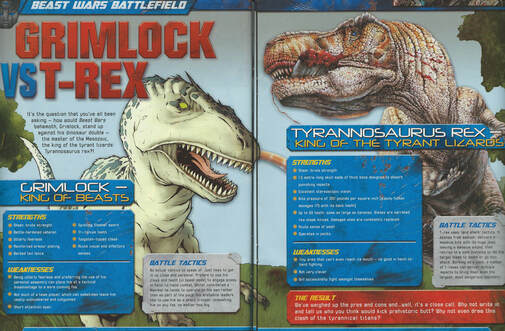 Two dissimilar dinosaurs.
The free gift is perfect for kids going back to school after Christmas, a stationary set. Hopefully poet Megatron is on the pencil.

The editorial (The lesser of two evils!!!) tells us it’s 2009 and “That can only mean one thing—a new Transformers movie!!!! Woooo hoooo!!! More news as it arrives!”. I think they might be excited.

Speaking of contemporary films, there’s a full page advert for Watching the Watchmen, about the making of the graphic novel that is now an 18 certificate film. So not really getting the target audience right.

Beast Wars Battlefield: Grimlock Vs T-Rex gives us the strengths and weaknesses of Grimlock (who does not turn into a t-rex) and an actually t-rex and asks us to decide who would win in a fight (it’s the robot. Obviously). Which ties into the first competition for Combat if Dinosaurs on the DS, that’s suitable for “Dinosaur-mad boys”, but not girls of course. 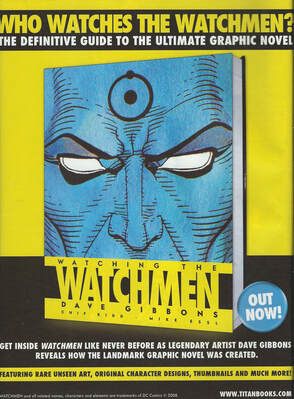 Get to the cinema kids!
The other and only competition is for Brinsinger, the conclusion to the Inheritance trilogy of books that began with Eragon. Meaning this is the first issue without a single Transformers related prize.

The character profile this month is for Razorbeast, just in time for him to have lost his character for the comic.

Artobots has two pieces of art using the How to Draw feature on Optimus Prime (from Bonnie Staraway, 13 from Penrith and Lydon Brewster aged 5 from Waterlooville), and I salute these heroes. Even if Lydon had some help from dad.

With all respect to the kids writing in to Star Screams this month (including Christopher Hepworth, 9 from Boston Spa, who introduces Starscream to the concept of money), there’s only one thing to talk about this month. The gag feature of Arcee’s Soul Mates, a spoof lonely hearts column of exactly the sort that was on the way to being made extinct by the internet, so this is pretty much for the older readers.

Females.
Now I must admit, I’d forgotten about this (the later similar gap paper idea that replaces it stands out more), and when I first saw it when rereading the idea made me smile. Largely because we now firmly have a Simon Furman written Transformers comic where they fuck.

But reading it made my stomach sink, it’s all men Transformers looking for “Female” Transformers (handy tip lads, calling a woman a “Female” only works if you’re a Ferengi) and saying things like “The right female would earn the chance to refuel me with energon”. This sort of humour isn’t impossible to make work, modern Transformers fandom is all about shipping characters and having them do sweet things, but it falls on just the wrong side of working.

Next week, EVIL Jazz (exactly the sort of guy who’d call you a female and send you a dick pic) is back. 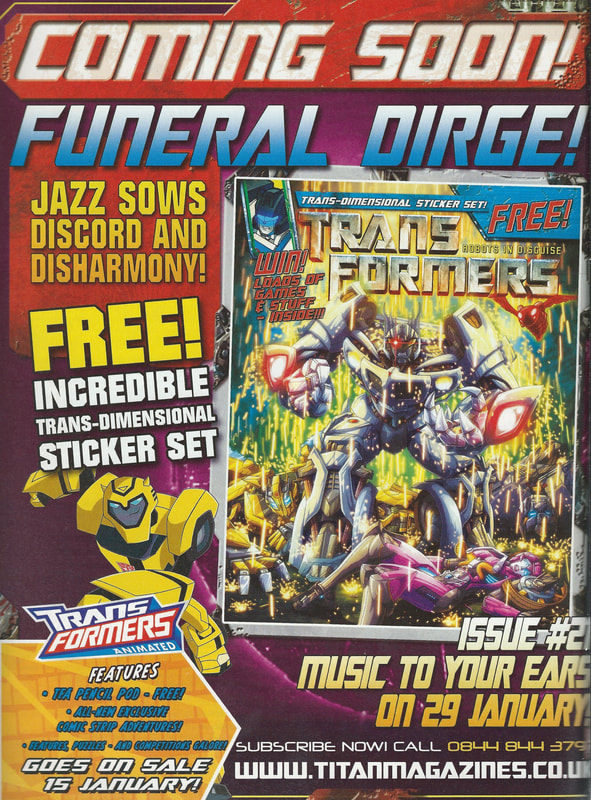