If You Tolerate This, Then Your Children Will be Next. 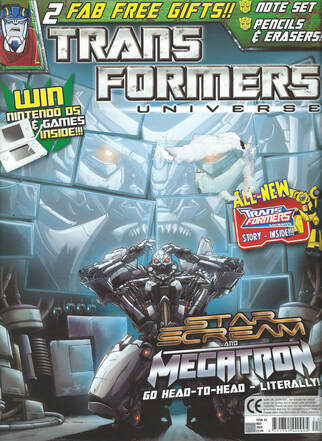 
This issue is a source of great tragedy and pain in the history of British Transformers comics.
Not because the Autobots are all dead dead dead and dead. But because this is the first cover of the excessive free gift era I have badly mangled in removing said gifts (a pencil and notepad set). It will not grow old as we grow old... 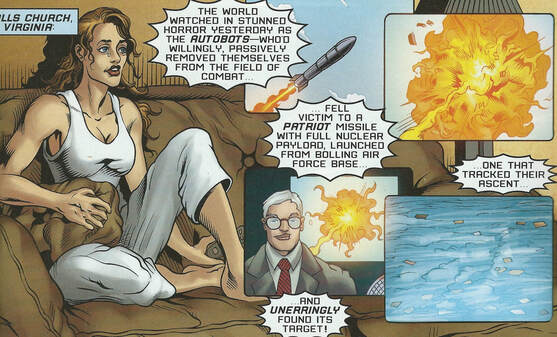 Griffith struggles with hands, but he sure knows boobs.
As suggested when you can finally see the cover, Starscream is still having some serious issues. But at least he opens on a high, delighted the Autobots are dead and sending his army (largely identical drones, an important thing for the plot later, but it does introduce the idea to kids who haven’t played the computer game before Revenge of the Fallen makes a thing of it), out to take the rest of America as both his toy President and other controlled people in power make sure absolute zero resistance is made.

Which is where we nicely get some focus on the human reaction to the disaster. First as we see Mikaela (well, presumably, she goes unnamed. More on this later...) at home, watching a TV report of the “accidental” destruction of the Auobot ship with tears running down her face. Then we get General Seward angry and dismayed that they blew up their one good chance to stop this the day before. 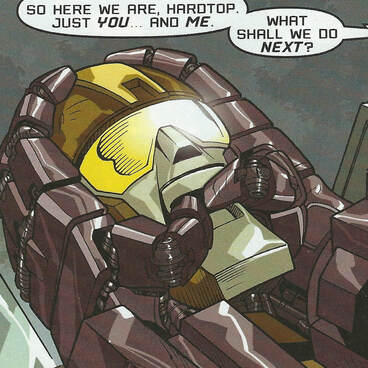 Looks like he'll have to... take stock.
Luckily, when all else have fallen, a hero will rise as we cut to the march of the Payload drones being stopped by an heroic figure shouting “You shall not pass”.

Yes, the New Decepticons have stuck true to their word of not letting Earth have the same fate as Cybertron, and lead the counterattack. Stockade’s team’s special powers including Fracture’s ability to take over control of the drones and Storm Surge being able to fly in boat mode.

Which gives us the best scene of the issue as the previously cocky ground troops commander Hardtop is grabbed by Stockade, who starts to put the squeeze on.

Literally, holding the ‘Con around the face and threatening to pop it off if he doesn’t reconsider the ethical debates at hand.
Which turns out to be a great recruitment tool as we cut to the Decepticon base and a disbelieving Starscream (who for some reason has a toy of his own head he’s throwing about) has to listen to Blackout revealing that Hardtop defected (as might the missing Mudflap. Now there’s a name to remember) and they’re now in the middle of a civil war.

We've all been in that time of crisis.
Which ends Starscream’s good day, and leave him under too much pressure from the ghost of Megatron to let him free and take proper charge.

Meanwhile, up on Cybertron/Unicron a team have assembled... The Autobots are alive! And Optimus Prime is about to take names.

Yes, I’m sure the entirely sensible faking your death in the face of overwhelming odds to buy time to regroup and stage an effective counterattack was as popular with fans as it was two years later in the film.

Again, this story continues to be incredibly strong, with an amazing balance of melodrama, humour and action, with Stockade remaining a full on legend.

Art is more variable. Andrew Griffith (or Griffiths as the credits have it) isn’t quite doing his first sequentials, this came out in parallel to the Defiance miniseries, but it’s very early in his career.

As you’d expect from the guy who would become the go-to artist for the IDW film comics, his robots are fine and chunky and have a very solid feel to them. The Hardtop panel being especially great. 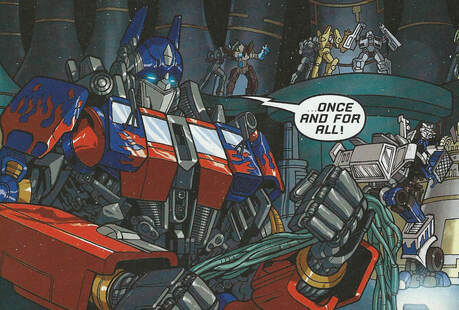 Good practice for 2011.
Well, as anyone who’s had the misfortune to read the Bumblebee prequel comic that was just John Barber refusing to write a Bumblebee prequel comic and instead doing a James Bond knock-off, Griffith is one of many Transformers artists who struggles with humans. He draws them like he’s never actually met a human, but once had them described to him in a noisy bar whilst drunk.

So his humans here are at odds with the real world solidness of the robots, tending towards being overly cartoony and with odd proportions. Plus vacant dead expressions that mean the mind controlled humans have to be drawn without pupils to see that they’re even more vacant.

But his Mikaela is especially bad. Noughties sex symbol Megan Fox is reimagined as having a massive chin, Danny DeVito Penguin style claws, borderline anorexia and two massive toes on one foot.

Though still with very carefully drawn big boobs because that’s the one thing any of the artists on this book can agree about.
She looks less sad about the Autobots and more in constant pain about her disfigurements.

It’s a shame it distracts from some otherwise decent art, but it’s not enough to dampen a comic hurtling towards the end game. 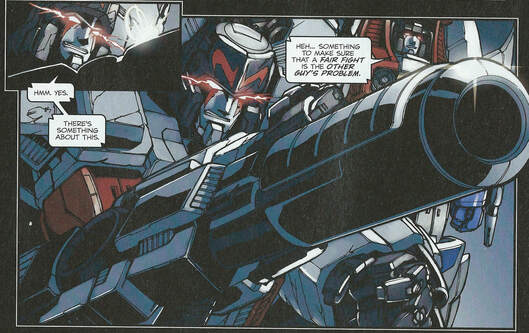 Proof this story is cannon.
With the comic rebranding itself one issue earlier than expected, the final issues of both IDW backups get split into halves rather than thirds. Though, again, they don’t feel as packed as the lead strip.

Megatron Origin has the shock twist that Starscream has not betrayed Megatron, but instead has lied to get into the senate, so he can kill the entire Cybertronian government.

Though later issue would retcon this bit hard to make it more a town council level massacre no one ever noticed.
With Megatron and all the prisoners then freed (and having rewatched it last week, Dark Knight Rises would later also have this fill up the prisons for a break-out plot), they go on the rampage, with Megatron being especially happy to be given a fusion cannon by Starscream. With mass destruction across the city following, Sentinel Prime has fight his own way to the armoury, whilst Soundwave pays a visit to Senator Ratbat...

The extra length helps the pacing, but there are still many odd moments. Megatron now speaking in full paragraphs that are, for some reason, in quotation marks within the speech bubbles especially standing out. 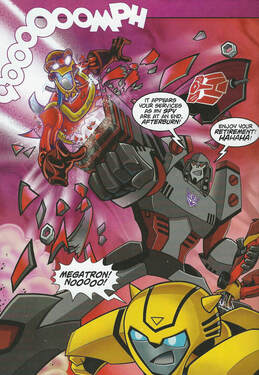 Nooooo not Afterburn!
The penultimate Animated comic starts with a mess-up on the credits. It has Simon Furman as writer and John McRea on art, when it should be Robin Etherington and Lee Bradly. The Wiki also has Etherington down as the writer of last issue, but without a note explaining the error, so I’m not sure if there was really a mistake there.

More shocking is how we open with the brutal death of Afterburn at the hands of a gleeful Megaton.

Which really upsets Bumblebee, which is odd for someone who never really had much to do with Afterburn, suggesting a rushed storyline due to them knowing the book wasn’t going to last.

Megatron decides Bumblebee must die because he knows the Decepticon’s plans, which is again odd, as Bumblebee knows nothing of his plans. Still, a big fight between all the Autobots and Decepticons ensues, with Starscream (apparently his presence here means it doesn’t fit into cartoon continuity) trying to crush Megatron do death with a crane. Which Optimus rather sportingly warns him off, though he is ignored. 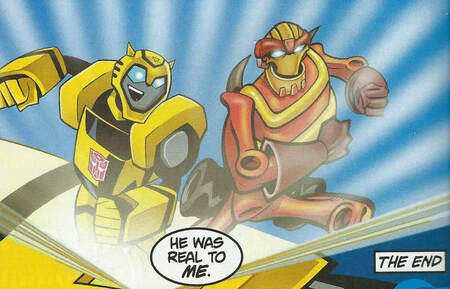 Those two pals who were never pals.
As the “Concerned” Starscream takes Megatron away, Optimus is then a complete dick to Bumblebee over his sorrow at the death of the soulless “Drone”, leaving Bumblebee looking sadly at a hologram of him and his pal.

Which feels like it should have been the last story, but we’ve one more to go (and I suspect the order of the standalone stories either side of this may have been a bit fluid, I’ll be counting the pages next issue to see if the 12th page in 23 could have been moved from there). If only for resolving all the plotlines rather than because this slightly rushed and bitty story is actually any good.

The comic doesn’t get its own cover this time, but it does get a Web World game page with Black Arachnia. 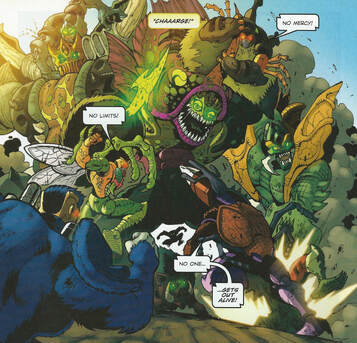 NO LIMITS
The Ascending’s last issue is more notable for Guido Guidi taking over the art, after Don Figueroa jumped ship for the first time to turn his fan favourite status into a mainstream comics career. Though his inability to draw humans (see, it’s a curse) would see him come scampering back. Before trying it again and failing again and now being off in the ether.

The story leaves me asking question. Mainly, why is Razorbeast out of control and crazy under angolmois, when the heralds powered by it are quite chatty and reasoned.

Still, the main plot advancement is Big Convoy calling in Bump to provide an anti-virus and Magmatron preparing to fight Shockaract in his white limbo. Other than that, it’s just characters punching one another. 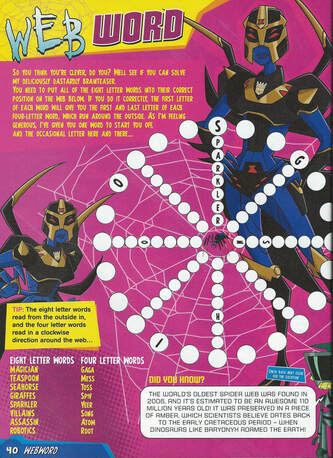 Pretty sure the oldest spider has to actually be alive to count.
So much comic content means little in the way of extras, but we do get a colouring page based on the cover of issue 20.

Meanwhile Ned reviews Tom Clancy’s H.A.W.X, The Conduit (“Promises to do for the Wii what Doom did for the PC and Halo did for the X-Box”), X-Men Origins: Wolverine and Rock Revolution.

Mystic Megatron’s Transformers Horror Scope is a feature we’ll see more of under a different host in the second volume. I’m a Scorpio (or “Scorponok”), and apparently “Remember, age is a state of mind. Sadly you were old when Unicron was a fledgling white dwarf”.

Damn, must be something in astrology after all.

Top Gear covers and has competitions for Humans: Meet the Ancestors on the Wii, the Animated Prime and Megatron two pack and an Animated arm blaster. Though oddly the two pack blurb talks about the Oil Slick toy.

Star Screams continues to have Arcee’s Soulmates, but more exciting is Starscream confirming to Jacob Watkinson (Decepticon) that not being allowed to watch Transformers is repression. 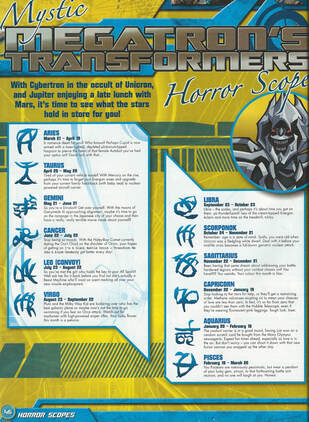 look how happy he is.
We get a real snapshot of Britain in 2009 as Starscream has to explain to Sarah Reynolds (teacher from Windmill Primary School writing on behalf of a happy pupil) who Gordon Brown is when repeating the story about the Prime Minister name checking Optimus Prime in an attempt to be cool, but just assumes Matthew Alden (8, from Guston) will know who hurricane failure weatherman Michael Fish is. The state of politics, hey? 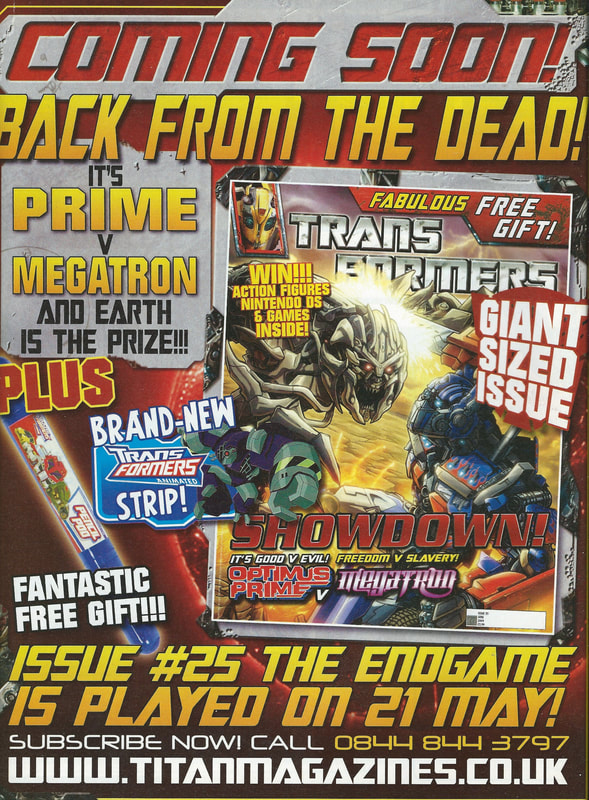