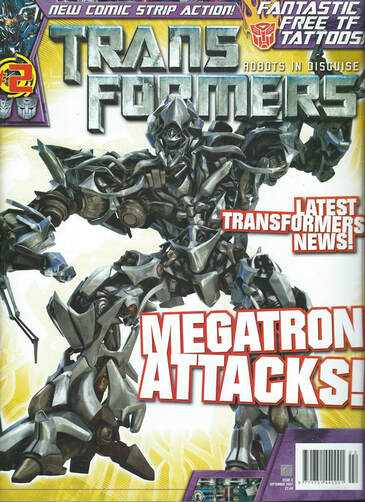 
Free! And for this ignominy, someone must pay!


With the film now out in the UK, this is normally the point that I would do a bonus entry talking about the total Bayhem of the film. Sadly, time has caught up with me (maybe if there’s ever a Transformation Volume 4), but instead I’m going to share an episode of Podcast Maximus I did with Transformers Twitter legend Becka last year where we talk through the film. I don’t think I’d have much to add beyond saying that I think it’s a considerably better film than near remake Bumblebee.

Issue 2’s cover is immediately notable for using an outdated early character model for Megatron where he looks like he’s wearing a hoody and the CGI isn’t as detailed. Why is a bit of a puzzle as the profile inside uses a picture of the much better final version that would have made for a more striking image. But this sort of early look is exactly the sort of thing that had me convinced the film was going to be a visual disaster (which of course it remained for many people). 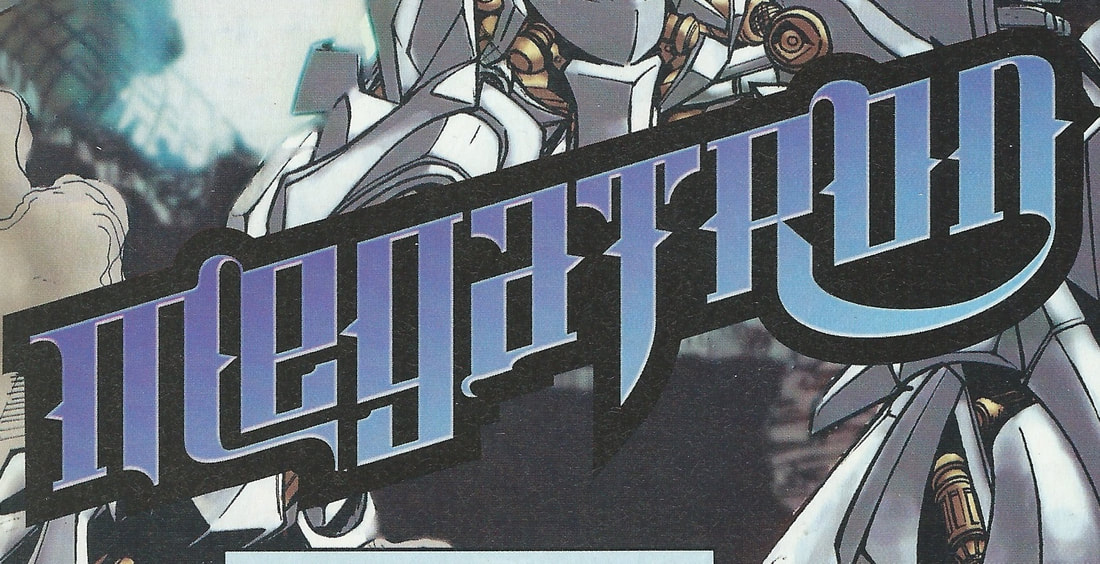 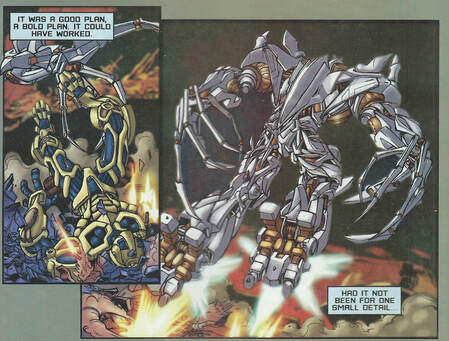 Megatron's bum for his number one fan.
Our lead story of Megatron is most notable for having art by Nick Roche, becoming the first person to have gone from American Transformers comics to the British. He was still early in a career that would eventually lead him to Spider-Man and Deadpool, this is a few months after his iconic Spotlight: Kup, and is our first real encounter with the new guard that would help take IDW into the second decade of the century.

He is also, I believe, the first person to have drawn a comic covered by this series who has bought a copy of Transformation. Truly I am into the era of my contemporaries being more successful and popular than me, but I won’t let it affect my review of the work of the sausage fingered scribbler.

More seriously, there is an irony here. We know that for the 80’s artists, Transformers was a difficult book to draw, often leaving them frustrated and angry. The kids who grew up with it and were used to the style had no such problem of course, making the professionals who all hated drawing the film characters get their first taste of what it was really like to be Geoff Senior.

And it’s an understandable difficulty, the CGI models were designed and crafted by dozens of artists on some of the most powerful computers in the world over months. However good you are, trying to capture that with a pencil on a comic schedule is never going to be easy. We’re going to see many solutions to that over the next few months, some more successful than others. 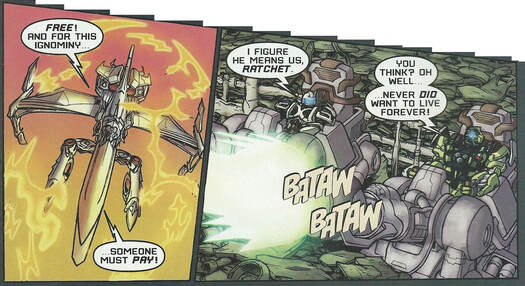 Megatron's full dialogue in the story Megatron, plus a Furmanism from Ratchet.
Nick’s attempt to deal with it is to go super adorable. Though he gives Megatron a suitable menace, everyone else you just want to give a big hug to. The stand out being Devastator (yes, it uses the film name, oddly for a toy promotion comic. I suspect editorial changed that as issue 8 will suggest Furman was still working from a script up to at least then) as a lovely chubby psychopath covered in G2 style ammo belts. Whist there’s a couple of oddities (Ironhide and Jazz missing their mouths and a big noticeable black border around everything. Nick can’t remember if this was to facilitate the smaller IDW reprint or simply him drawing it at the wrong dimensions), this can be considered a great success and makes it a shame we won’t be seeing him again on the book.

Which brings us to the plot. Which actually starts in a moment from the Prequel comic we won’t be seeing till next issue, as Megatron inflicts the injury that will leave Bumblebee a mute (again, no one was expecting the films to last long enough or become backwards looking enough for us to see a completely different take on this 11 years later). Megatron’s inner narration is as cumbersome as Prime and Bumblebee’s were last issue, but as he’s more a McGuffin than a character in the film, it’s entirely possible he could talk like this, so it doesn’t feel so out of place.

Despite being titled after him, the story isn’t really about Megatron. Like many of the IDW Spotlights it’s more concerned with setting up ongoing plots rather than being about the character. So though there being a lengthy monologue (though he only gets one spoken sentence out) as he flies off into space after the just launched Allspark, things are really about the ground troops trying to shoot him down. 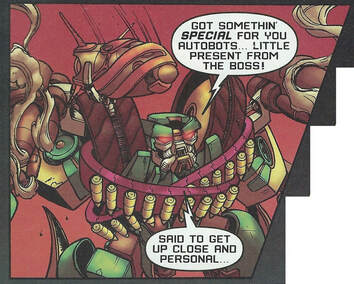 What a cheeky chappie.
This being Jazz, Ironhide and chief medical officer Ratchet. Who is working the biggest of the big guns. No wonder poor Bumblebee never got better.

They don’t manage to do more than delay Megatron, but he’s annoyed enough to set Devastator on them, which is where the actual plot starts, halfway through. Devastator may be cute, but he’s also as dumb as two short planks and makes for a refreshing change after some of the more ponderous lines so far. He’s so loyal to Megatron he’s prepared to use a foldspace warhead that will kill everyone present... including him. Which he cheerfully uses anyway, making everyone vanish in a big bold white light.

We end on Megatron flying out of the convenient wormhole network the Allspark went into, above a strange green planet and regarding himself and the Autobots, as LOST IN SPACE.

This may not really kick off till the halfway mark, but the Devastator scene is fantastic, and for the first time gives us a character who feels like he’s come from a Michael Bay movie. With Nick Roche providing some lovely art, it makes for an enjoyable read. 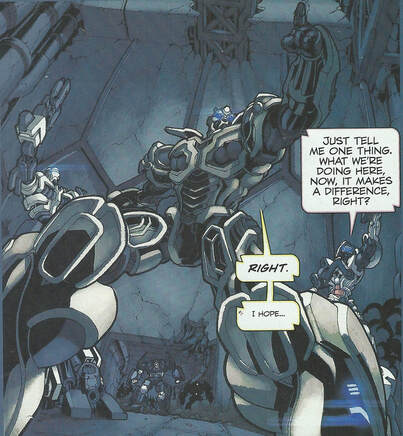 "Arcee isn't pink, how can we tell she's a girl?" "Give her speech bubble a pink outline"
The second part of the Prequel gives us the reason I think Chris Ryall was really the main writer here by introducing the city of Simfur. I would like to think most writers would stop before naming a city in honour of themselves, making it seem like Furman probably just did a letting them stick his name on it minimum contribution. And Simfur is an incredibly awkward name, not sounding anything like the other place names on Cybertron.

The story itself is less heavy on the narration, making for an easier read as Bumblebee wrestles with knowing the real reason he and his troops (or Arcee’s troops as the recap has it) are fighting to the death for seemingly no reason. It’s still in no way the lovable psychopath from the film, but his more sombre persona at least doesn’t use as many Scrabble winning words as he did last issue.

As his team are captured (giving us our first proper toy only characters as Arcee is a generic design. Take a bow Inferno, Dreadwing, Swindle and Payload), things pick up as Megatron arrives and—scaring his troops off with deep relief he’s not killed them—he starts to torture the Autobot with the promise he’s going to see how loudly he can scream. The kinky sod.

All of which makes for a stronger chunk of story than the first, with Megatron feeling more like the camp film character than in the lead strip. 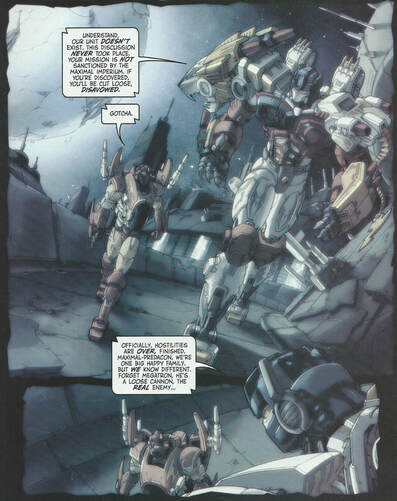 Your mission...
Beast Wars is mainly concerned with explaining the set up, giving us lots of flashbacks to Cybertron as Magmatron decides he’s had enough of the cowards on the Tripredacus council and he’s going to take firm action of his own. Meanwhile Razorbeast (who is going to be the breakout character of the series) is given a secret mission to infiltrate the Predacons and find out what’s going on by Leo Convoy, who says the little Maximal will be disavowed if caught. Sounds like a Mission Impossible to me.

The main development in the present is establishing the Predacons are there to grab the protoform stasis pods from the Axalon. Which is odd for a comic with a fan consultant that’s working hard not to contradict the TV series, as it was rather a plot point that the pods were nearly all destroyed at the end of the first season

As an exposition instalment this is the weak link of the issue, but it does have some well done Cybertronian modes for everyone that at least makes for some nice visuals.

The free gift this month is some rub on tattoos, though perhaps the biggest surprise is a three page interview with Activison’s Andrew Burrows about the tie-in computer game. It’s far more typical of Titan’s licensed magazines (there’s also an advert for the attempt to turn the just cancelled Dreamwatch into an online magazine) than anything we’re going to get again. It’s actually quite a nice read as well, not talking down to the kids. 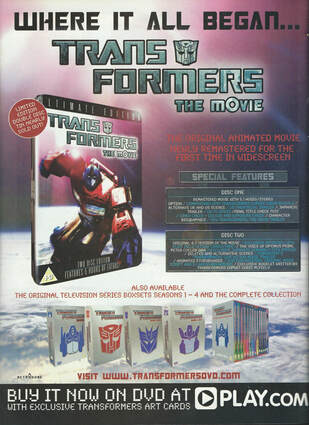 Get over to Play.Com!
Contents page Bad Guise attempts to create some tension around the fact Megatron might stop you getting your copy and has a condensed version of Transformers 101. It also promotes a signing at the London Film and Comic Con on September 1st by Furman, Senior and Steve White. Based on the advert later in the comic, you could also see a Camero and future Revenge of the Fallen legend Deep Roy.

For real nostalgia hounds, there’s a Play.Com advert for the new DVD release of the film (“Tin nearly sold out!”) and the original series.

Character Profile covers Megatron (oddly they don’t seem to have a picture of his vehicle mode, so a drawing from the comic is used), the poster gives you clean cover art; Autobot Vs. Decepticon Smackdown covers Jazz and Blackout (seems a bit unfair to have a two on one fight); Battery Recharge! lets you win an Optimus Prime bed set (would you risk your face on a movie Prime pillow?!) and Top Gear promotes and has competitions for film posters; a USB flash drive pen and unleashed Bumblebee toy.

Mech Mail presumably has genuine kids letters now, including one from Thomas Penk of Twickenham talking about his fan created character of Blitzbomb, who is basically Fulcrum from More Than Meets the Eye if he could have pulled himself back together after exploding in bomb mode. 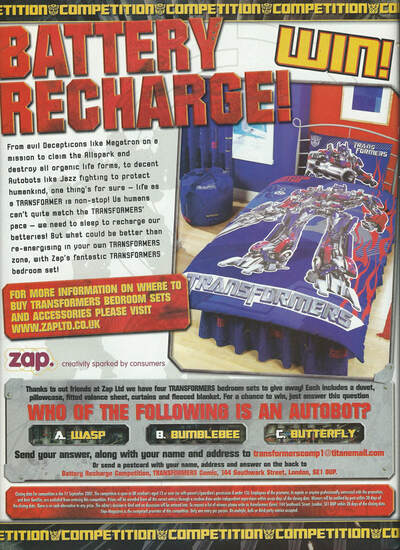 It being a single bed only definitely reads the demographic right.
Most notable though is a couple of pieces of art by IDW artists. The first is a G1 character group shot by Frank Milkovich which the comic presents as if from a reader (ironically Frank will later work on this comic). The second is a Movie Prime piece by Josh Burcham, and as he’s credited on colours for both the reprints in this issue he’s role as “Colourists extraordinaire” is acknowledged. Though amusingly, for someone who is a much admired professional artist, his work is scrunched up in the corner smaller than the drawings by 12 year old children.

I’m not entirely sure of the reason for the inclusion of these, despite the claims I doubt they were sent in spontaneously. Perhaps they were asked to provide something (off the shelf or specially drawn?) to pad out the comic at this early stage when there’s not much genuine fan art?

Next week, it’s time to Ratchet up the tension. 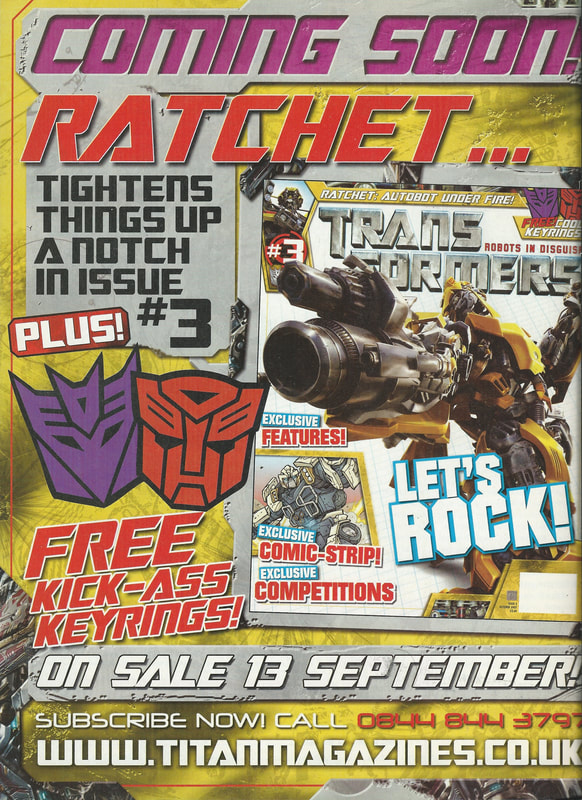