Give Peace a Chance. 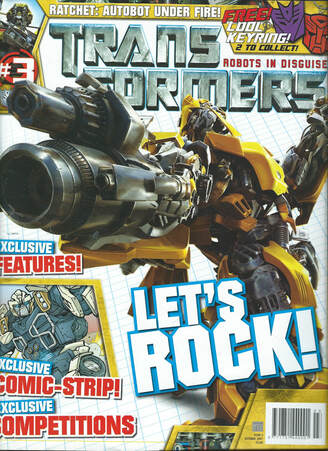 
Out of the solar accumulator, into the plasma fire!

A Bumblebee cover. Someone has a better agent. Though it is perhaps indicative of the slight rough patch we’re about to hit that, after doing stories focusing on two of the movie’s big hitter characters, the single most important Transformer in the whole film is resolutely ignored. Yes, he gets a good size role in the IDW reprint, which is probably the reason why, but I suspect most of the potential audience were not burning with passion for a Ratchet story. Including, from the way it reads, the author.

There is one potentially exciting thing to note before we dive in though, the lead strip is the first to be marketed as a “Part 1” (and the speed I’m going through this makes it the second Lost in Space I’ve covered in a month) despite the stories to date all having flowed into one another. The comic’s future is clearly reasonably assured at this point. 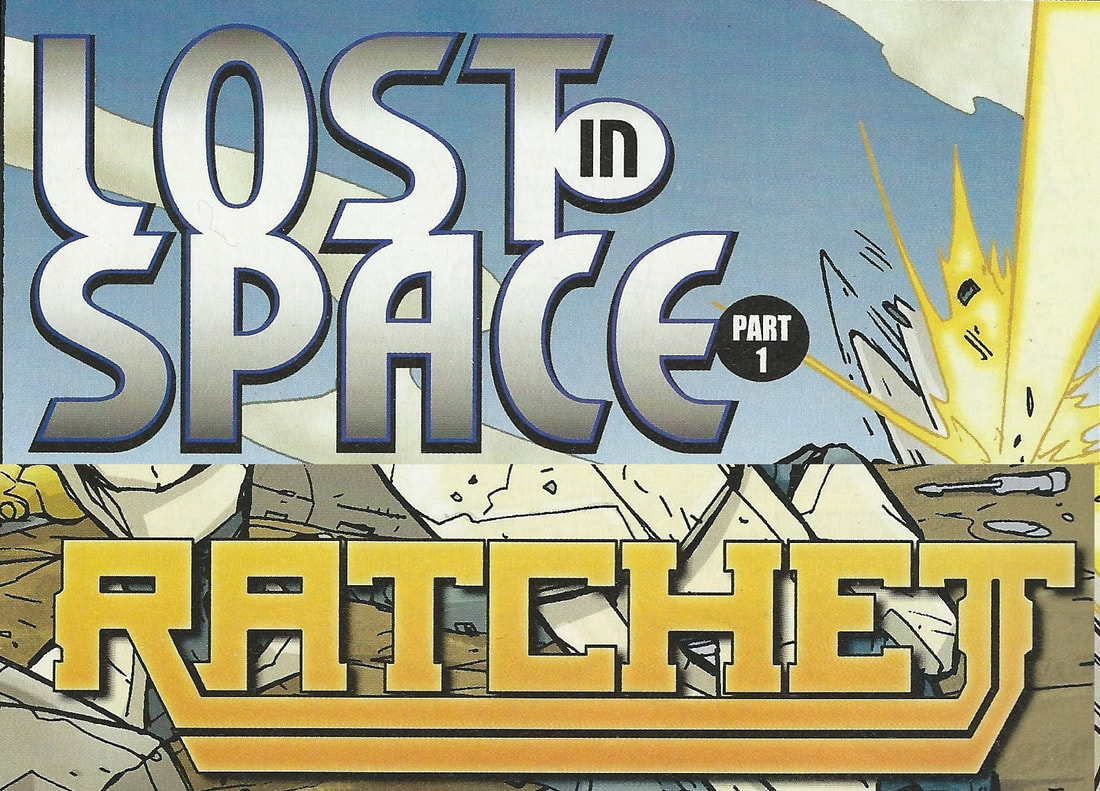 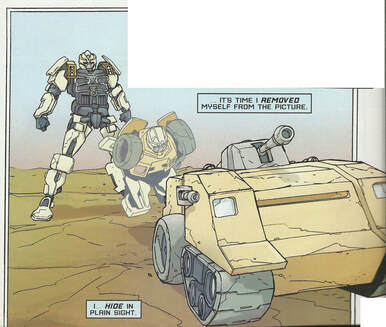 Brown and beige and brown and beige.
As noted, Ratchet is where the comic hits a bit of a slump before things rally round for the truly great era of the run. The reason is simple: It continues to be a prequel to the film.

Now, prequels generally only work under one of two circumstances:

1: It lets you see an important moment in the history of the characters that hasn’t been shown before. The first two issues met this by revealing how the Allspark was lost and Megatron and Prime’s response to this (though, as is the problem with a lot of prequels, this information is covered perfectly well in the film by two lines of dialogue).

2: It lets you have new adventures of your favourite characters in a time frame when they’re still young and at their peak. Obviously the film is still too new at this stage for anyone to be crying for a slightly younger Ratchet story, and of those that are going to be covered in this strand, only Jazz is one you couldn’t do a post movie comic about. At least not without doubling down on the idea.

Which is a roundabout way of saying that Lost in Space: Ratchet is a story with nothing to it.

Following the foldspace explosion at the end of the last issue, Ratchet has ended up on a generic planet where two generic groups of aliens with generic names have been fighting a generic war that has parallels that make Ratchet think of his own conflict back home.

I mean, it really doesn’t have parallels because it is so generic, Ratchet is super projecting here, to the point it looks like he daydreams about Megatron.

Ratchet, after managing to set up a transmitter to contact home, decides to intervene arbitrarily on the side that are doing slightly worse in the first big battle he sees, challenging their generic warlord in a mech suit to a battle he wins that, because the page count is running out, automatically makes him their leader. He then stays long enough to force everyone into peace negotiations (remember this for later), before he sadly thinks about going home. 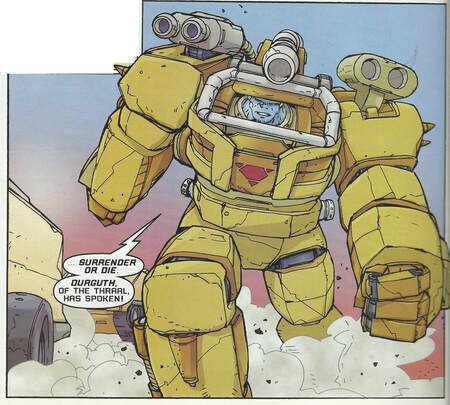 The only mildly interesting thing is Ratchet uses the slightly odd “Cybertron’s greatest diplomat” characterisation Furman gave him in the Movie guide book (and this issue’s profile). Making me wonder if he had the idea for this story first and added that there as a result, or if the comic was inspired by that particular cheese dream (apologies to the film people if they actually gave that much though to Ratchet’s character and it comes from them).

The art is by Wildman (in collaboration with his company Wild Ideas, who despite the groan inducing name have gone on to great success representing him on storyboards for shows such as Doctor Who), meaning he equals Furman as the person who has worked for the most different companies on Transformers comics. Wildman having Devil’s Due instead of Fleetway.

The actual art is pretty solid by his modern standards, but is slightly undone by him having been asked to matched the character models and washed out colour schemes of the IDW Prequel comic, meaning Ratchet doesn’t actually look anything like Ratchet, either in the film or the last issue, even before he takes on a local tank disguise. I’m not sure why he was the only artist to have been beholden to this, but it creates an odd visual discontinuity. And his take on Ironhide when Ratchet thinks of him—with a blood red gaping hole of a mouth—is frankly terrifying.

Overall, this is the weakest story of not just this series to date, but that I’ve covered in quite some time.

So, can the backups help cheer things up? 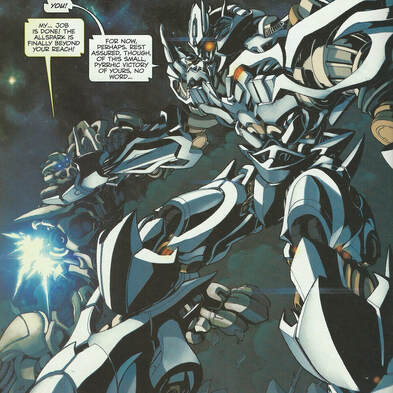 "I hope doc Ratchet is about!"
Part three of the Prequel ends the original first issue with the moment that opened the British story last week: Megatron destroying Bumblebee’s voice box before flying off after the Allspark. With the space to give it more detail, the attack on Bumblebee is pleasingly nasty and well done. Indeed, it’s actually pretty similar to when we’ll eventually see the moment in live action in Bumblebee (albeit with a different attacker).

There are two unintentionally hilarious moments though. The first is Bumblebee revealing that telling everyone of Megatron’s plan after he recovered took a long time because he had to learn new ways of communicating after losing his voice. Yes my friends, the Transformers have never invented the pen.

The second is, we’re shown Ratchet was one of the first people on the scene to help Bumblebee after the attack on him. That’s the same Ratchet the lead strip claims was teleported to another planet and spent a great deal of time there right after this attack happened. So was it supposed to have taken months for him to get treatment? It’s a shame UK writer Simon Furman had no idea what US writer Simon Furman was up to. It’s also lucky this is the issue where the British story had to make Ratchet look like he did in the IDW comic, as otherwise readers probably wouldn’t have recognised the pasty white robot as their favourite medic. 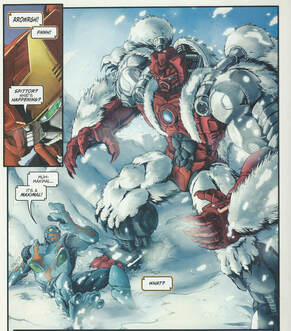 Bear with me.
Beast Wars also concludes its first issue with a nicely done action scene of Magmatron sending out a McGuffin signal that will activate all the stasis pods that totally survived the end of season 1 and turn them occupants into Predacons... except when they emerge a lot (if not all) are Maximals! Yes, that rascally Razorbeast had thrown a spanner in the works and—after running away very fast—sends out a beacon to bring his newly created team to him, which pisses of Magmatron enough to “Unleash the Beast Wars!”.

This is a good solid romp with some nice moments of the new Maximals stomping the Predacons who were expecting to find a mate rather than an enemy. It certainly makes it easy to remember that the full American issue was actually very we received at the time it came out. The question is, will it keep that momentum up?

There’s a choice of two different free gifts this month, an Autobot or Decepticon keyring. A cunning attempt to get you to buy two copies.

The contents page, called Ratchet up the Tension... this month (wait... that’s my joke!) has an odd rant about the “Gimps with their up-rated lawnmowers” on the three years dead at this point TV show Robot Wars. Did Steve White not get past the heats or something? 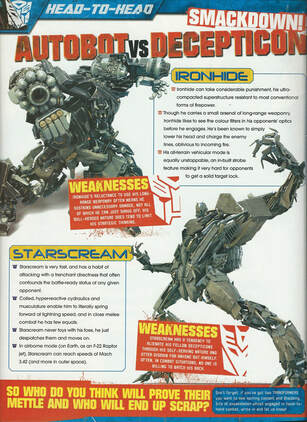 "Trenchant"? Oh yes, Furman wrote this.
Ratchet get the character profile, and if you didn’t know Furman wrote this, you’d be able to tell from the fact the Autobot is given the special power of the Aston Martin Vanquish from Die Another Day. It also repeats the diplomat idea and tries to claim that his spinning blades of death are medical tools.

Autobot Vs Decepticon Smackdown! sets Ironhide against Starscream, and again you can tell Furman wrote this as Starscream is just the G1 cowardly traitor version rather than the capable loyal bruiser of the film. Though as the sequels will fully Chris Latta the character, this is more prescient than an error.

Who? What? When? is a competition for various Dorling Kindersley books, including You Can Draw Transformers, The Movie Guide, The Transformers Funfax and the infamous Ultimate Guide. Notably, the competition question treats “Punish and enslave” as the Decepticon motto rather than just Barricade’s thing.

The poster is of the cover (from here on in, assume this is always the case unless I say otherwise), Top Gear features the film soundtrack, a Megatron toy and the Transformers Blasters (“Freedom is the right of all sentient beings—and sometimes you need to pull out your blaster and fight for that right),with competitions for all and Transformers: The Game Reviewed! is a totally unbiased rave write up on the console version of the film.

Mech Mail is starting to get more interesting now more kids have seen the film. Starting with 9 year old Christian Evans being told Steve White is the only person on staff who’s seen the movie at the time of writing and he won’t reveal how good it is! 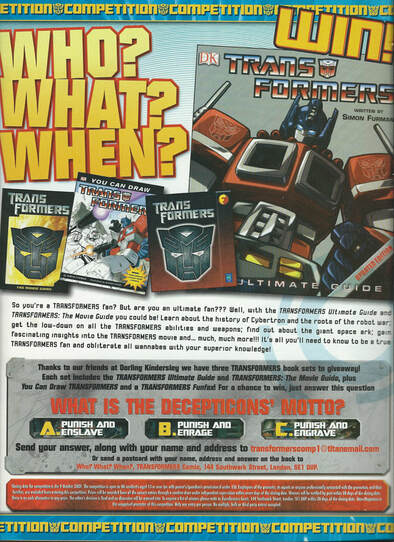 Boob Prime.
There’s a touch of the old Dreadwind Fails to Answer Questions Properly as James, age 8 from Dorset asks why Megatron is mean, and only gets a vague response even though the previous issues profile went into his descent into evil. It’s also rather scathing on him wondering why everyone by Optimus was grey in the first issue, suggesting they were all drones before adding “Did we successfully weasel our way out of that one?


Jared Shurin asking if Optimus is going to get a dedicated comic story every month let’s the book set out its stall for the remaining issues in the Lost in Space arc. Notably someone has clearly had a word about the Brawl/Devastator thing and they’ve decided to clarify the situation. Unfortunately this is done in a way that only confuses things more as we’re told (after saying the “six principle new robots” in the film will be the focus of the first six months) that “Well, OK, Devastator isn’t in the film, but Brawl is and they’re as near as dammit”.


Again, remember, Devastator was what Brawl was called in the in the film rather than the other way round.


There’s some entertaining art this month, including Ewan Miller sending in a lovely drawing of Hot Rod standing over the dying Optimus from the 86 film with the caption “Rodimus Prime helps Optimus”, as if the comic wants to soft peddle the violence to fans of the Bay films.


Hero of the month though goes to Tyler Vosgerchian, who sends in not one, but two drawings of Armada Sideways. Never change Tyler.


Next week, on Thursday as I’m away next weekend, it’s Devastator! 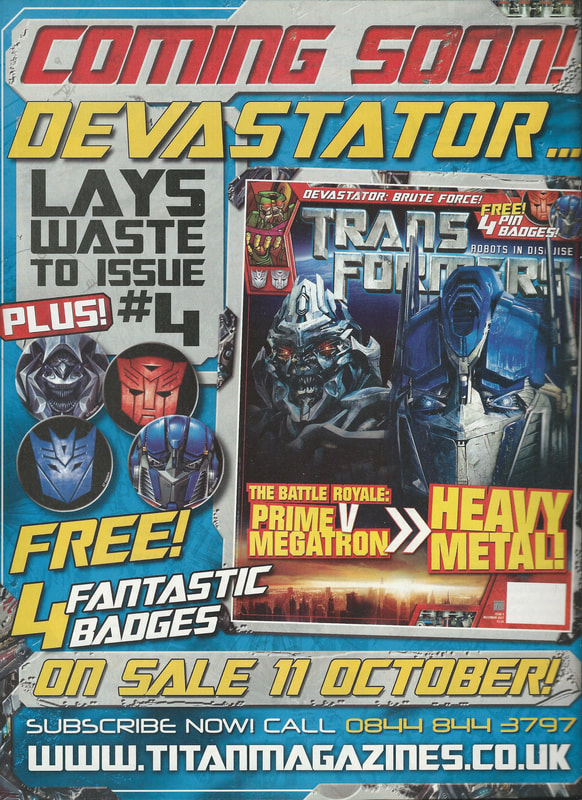