Some Kiss May Cloud My Memory, and Other Arms May Hold a Thrill. 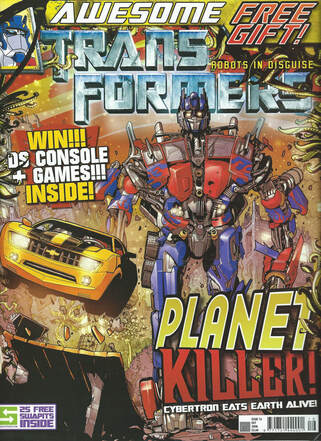 
I gather Ratchet, you interpreted your responsibility, vis-a-vis the Allspark fragments “safekeeping”, a touch freely.


The cover this month feels like it might have been intended for a later issue, the “Planet Killer! Cybertron eats Earth alive!” tag-line is technically metaphorically correct, but will become more literally true as we go along.

It also doesn’t even hint at the main plot of the lead story, the thing everyone knows about this one.

It’s also the first cover to be vague about the free gift, a Rotor Force style disc launcher. 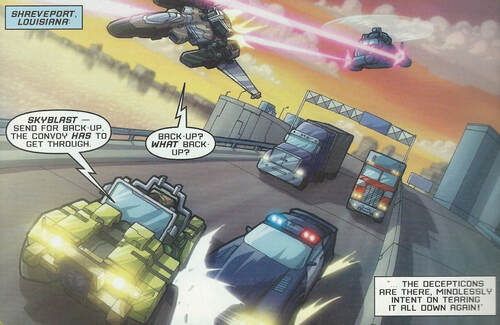 It's a double joke because Convoy is what G1 Prime is called in Japan,
Dark Spark is effectively a bit of a breather issue, with a good chunk of the action given over to more reaffirming things we already know rather than moving the overall plot along. So to deal with that side first...

The Decepticons are attacking every attempt by humanity (or at least North American humanity) to rebuild, with the Autobots (including another design for Elita-One and Arcee that makes it hard to tell who is meant to be who when they’re unnamed) fighting them at every turn whilst badly outnumbered.

Meanwhile, the corruption of Earth by the Allspark has become a lot more literal than the Edge of Darkness influence we saw two months ago, with it now doing the Key to Vector Sigma (or, if you want to be cruel, the first Dreamwave mini) thing of physically converting the planet into a sort of Cybertron. In particular leaving rich and powerful sources of Energon about, with Prime assuring President Allen (who has also changed head again and can sit in Prime’s cab without setting off any alarms, despite Bumblebee being able to tell army guy was mind controlled at a distance last month) a top science team led by Evac will be arriving soon.

Remember that specific detail when it comes to future issues.

So far, so perfunctory.

Jazz and friends.
In the A-Plot, Ratchet has seen the desperate against all odds struggle, and has decided to revive Jazz using the tainted Allspark fragment he was given. Though he needs to find the legs first. This royally pisses off Optimus, as he’s surrounded by proof that the Allspark is a mess thanks to Megatron’s influence.

Still, Jazz seems chipper and he and Ratchet race off on a mission to guard the new energon fields.

Somehow, despite having only heard of this energon source seconds before driving there, in the time it takes the slower Ratchet to arrive, Jazz has acquired a holographic communications system and set up a Del Boy style scam to sell the now energon rich planet to the highest alien bidder. Oh, and an inhibitor to completely freeze Ratchet.

So yes, he may have turned evil (though as we barely knew Jazz, it’s hard to guess how much of a shocking change this really is), but he’s about 200% more efficient than all the other Autobots.

Starscream, based in the Florida Keys and with other people to talk too this month, wants the energon as well though, and has sent a team led by Dreadwing to persuade Jazz to split. Again.

This is the distraction Ratchet needs, as it turns out he carries a full set of spare parts on himself at all times, allowing him to switch out the bits affected by the inhibitor and deliver some swift blows to the communications equipment, before Jazz decides to cut his losses and scarpers, leaving the doctor bereft at what he has unleashed. 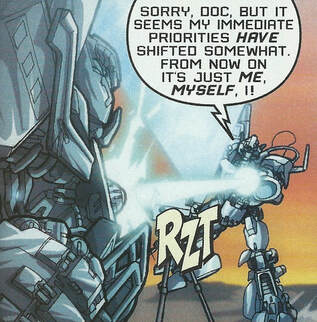 Who knew Jazz' morals were in his midriff?
It’s not really clear why the aliens Jazz called, now knowing energon is all over the planet, don’ just invade Earth anyway.

The problem here, as we’ll discuss in nine issues time, is that—despite the release date of Revenge of the Fallen already being known—this volume will wind up running one less issue than people involved seem to have expected. And though he’ll pop up once more, that means EVIL Jazz will be the requisite plot-line Furman fumbles the ball on, never being properly resolved.

Meaning that, with the rest of the story largely being repetition of stuff we already know, this is the most nothing issue we’ve had in a while. It still has a few nice moments—including seeing Barricade and Blackout definitely survived this version of the film—but is otherwise skippable.

On art, Jeremy Tiongson does a reasonable job, with more humanised character models Jazz has normal hands), and an awful lot of Borg style tubes coming off everyone.

Me on the morning after Becka's birthday (a joke for about three people there).
The first issue of both the reprints have been split into four rather than three parts this time, which does hurt Megatron: Origin as it means this third part has a lot of full page spreads of Cybertronian cities with not much happening. Though Megatron does get a voice-over across one that is the first time he speaks in sentences in the series.

After being subdued, Megatron is put on a prison ship. When it turns out the first people to sign up with him are Rumble and Frenzy of all characters, with them having been handcuffed without Rumble’s pile divers having been disabled, allowing them to escape and commandeer the ship.

They should ask Jazz where he gets his inhibitors from.

After shooting down the senator’s shuttle (with Megatron explaining they’ve hurt it rather than destroyed it so as to give the security services something to save rather than chasing them), they flee to the Kaon underground like The A Team, with us ending on Sentinel Prime calling a meeting in the security building.

Probably the most interesting thing here is the presence on a fembot on an advertising billboard, the first of a few to appear in this series. As this was before Spotlight: Arcee, that makes that story’s claim of there only being one female Transformer a retcon. Which is ironic as one of Furman’s later stated issue with Mairghread Scott over the later inclusion of more and retrospective female characters was hating retcons.

Everyone wants a piece of Razorbeast.
In Beast Wars, it turns out Ravage was after the device to get back into normal time, as he knows the Beast Wars cartoon is over and he wants out before Primal and company leave. Sadly Razorbeast and Snarl sort him out, impressing Magmatron even more.

After some more time jumps to the point the Maximals are about to try and send another message out, the Predacon prepares to do... something timey wimey.

As the Ravage plot is so quickly shot down, that makes it rather irrelevant, but it does at least give this part a nice self-contained action scene.

And hey, Ravage tells Razorbeast he wants to spit-roast him. The kinky kitty. 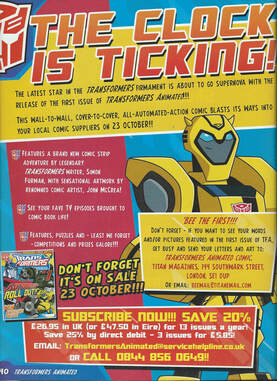 Tick tock.
The shadow of Unicron falls all over this issue, starting with the contents page talking about Jazz’ turn to the devil by invoking the Transformers version.

All the competitions are for non-Transformers items this month, including Samba de Amigo for the Wii and a fancy version of soft ball called Cosmic Catch.

The Beast Wars profile is actually of an exclusively Beast Wars character this month, the famous Elephorca. Which has lots of talk about Unicron and Angolmosis energy that doesn’t really make much sense, but still explains the concepts more carefully than the comic will. This is most famous though for all the art being of the otherwise identical and much featured in the battle scenes to date Torca. Who is an heroic Maximal.

There’s a full page ad for the coming Animated comic that again asks you to get excited. But it’s over the page from the distracting sight of a Swapits voucher. Which turns out to be a sort of 2008 BitCoin, making it perhaps a bit unethical to promote virtual money to kids.

Other the coming years, we’ll see the extra features get a little more desperate to fill space. A trend that starts here with the debut of a new regular feature, Way Past Cool! Bumblebee’s Reviews. Obviously, as film Bee loved music, Titan has him reviewing... 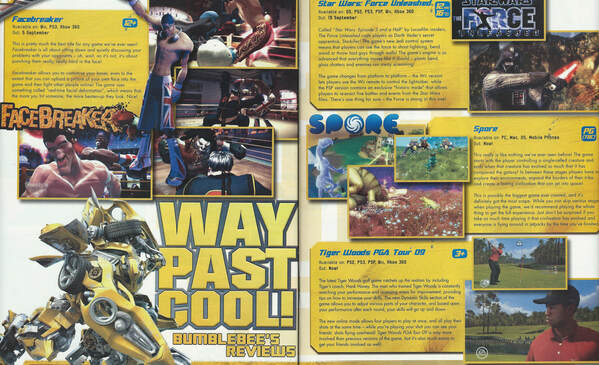 Which by happy coincidence, he loves every one of. So the whole thing feels like a Titan employee trying to get comp copies. Covered this month are Facebreaker, Star Wars: Force Unleashed, Spare and Tiger Woods PGA Tour 09. And pretending to be Tiger Woods wasn’t as exciting in 2008 as it would be a couple of years later.

Artobots has more multi-generational drawings, but it’s Max Home, age 10 from Cheshire, on Star Screams who impresses most for his artistry and sneakiness. This is due to him and his dad stealing his sister’s art beads to make Autobot and Decepticon logos. Which, as she doesn’t read the comic, is the perfect crime.

The big news though is in reply to Patrick Verity, age 8 from Swillington, who asks when the next film is out. To which Starscream reveals Revenge of the Fallen will hit UK cinemas on 26th June 2009. Hopefully with “more Autobot casualties, less pitiful humans and a lot less toilet jokes. Bumblebee should really be in a nappy if he has such poor bladder control”.

This means the website of the month is the official blog covering the making of the film. So the juggernaut to both the next film and the next life of the comic is well underway.

As I’m about to hit a lot of Animated to cover, it’s time to catch up on some of the other Addendums I’ve not had chance to get round to. Starting with the cartoon about warring beasts... 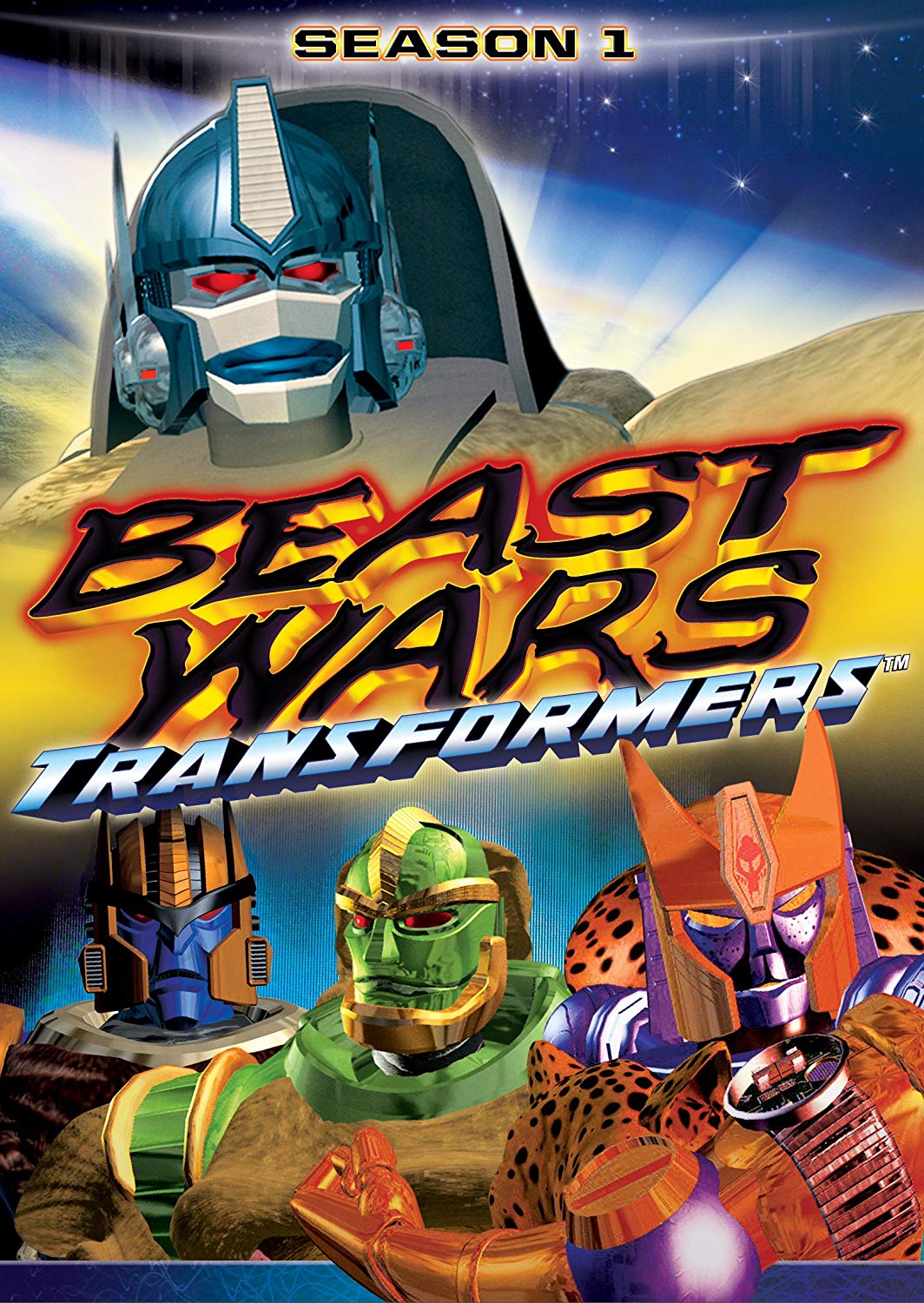