Be Proud to be Out of Your Mind and Out of Control. 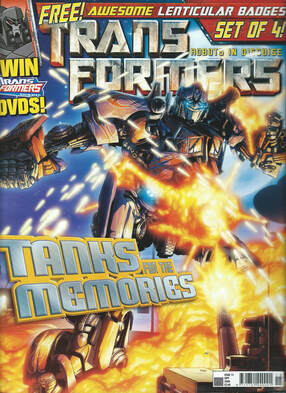 
I do so love it when a plan comes together.


There’s been some debate this week on Twitter over what pushed Optimus into a situation in the later films where he would kill humans. Personally I’d say he’s a pragmatic but fair front line soldier who won’t take out enemies that can’t hurt him, but by Last Knight the anti-Autobot military teams do pose a serious lethal threat to both Transformers and their human friends.

The cover this month though gives a different answer as to why he might not think too fondly of Earthlings, as it shows him repeatedly and brutally being shot in the dick by a tank.

That’s got to smart.

The cover also shows one of a couple of signs of editorial sloppiness that’s unusual for the book, promising a competition for Transformers Animated DVDs that isn’t to be found within. The other is the description of the lead strip on the contents page is actually for next month. Which makes you wonder if the last second extension to the alternate timeline story has created some fumbling behind the scenes. 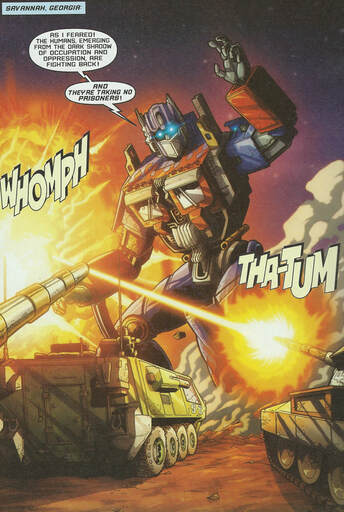 We've all feared that.
The lead strip itself is a lot more straightforward this month, basically being one big fun action scene. Though we do open with Optimus “My Bad” Prime declaring “As I feared! The humans, emerging from the dark shadows of occupation and oppression, are fighting back!”

Try imagining Peter Cullen saying that. Starscream quoting Hannibal Smith over the page seems much more in character by comparison. Especially as he continues to talk and rant to himself in his secret base with no one else present, revealing how he’s going to use his Insecticons to control the (badly in need of a shave) commander of the NATO troops to keep the fight going after Tom Banachek has convinced the now named Vice President Theodore F. Allen to call a cease fire.

The Insecticons and cerebro shells are the first sign of a recurring issue with the film spin-offs of making everything more G1, because that’s better. As shown by how much more popular the Bay films were as they added more and more stuff from the old mythology.

Still, it gives us the most Michael Bay sequence in the comic to date. After the commander ignore the order from SACEUR (a real life NATO high ranking officer who, amongst other things, runs SHARPE, the organisation the short story From a View to a Kill is based around. Considering Furman was at the peak of his often very obscure Bond references at the time, this might be deliberate) to stand down and instead shoots his second in command, it’s up to Bumblebee and Mikaela—going along because few military people will listen to a Transformer—to fight their way through the fray to him. 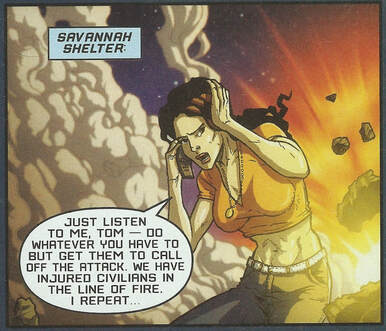 So what two things stood out for you in the film them, Kieran?
Giving us a moment of Bumblebee racing towards a human forces blockade of tanks, with Mikaela shooting a gun out the window at a generic Decepticon behind them, before ‘Bee uses his turbo boost and blinding headlights to jump over the tanks and crash the Decepticon.

It’s the best realised action beat in the series to date, and compensates nicely for the odd bit of clunky dialogue to actually make you feel you’re in the Bay Universe. It would probably get a round of applause in one of those annoying American cinemas where people insist on interacting noisily with films.

After that, things are simple, they disable the cerebro shell and, with the testimony of his amazingly still alive subordinate (what short of soldier shoots someone at point blank range and doesn’t make it lethal?!), the situation is ready to be defused. Which Optimus Prime helping by surrendering to the human forces.

Which, again, pre-empts a major storyline from a later IDW comic and does it better.

Only needs a sunset to be peak Bay.
We end on a slight topical gag as, in the run up to the real life 2008 US elections, T. F.Allen is sworn in as the 44th American President (you can tell the Fallen gag in the name was intentional as he’s introduced with his middle initial, which makes you wonder if in this timeline his similarly named dad was also President, needing that distinction)... but with a little tiny Insecticon on the back of his head!

This is a fun issue, that may not have the same depth as the first part, but it fully embraces the Baysthetic with bombast.

Art is by so obscure newcomer they don’t have a TFWiki page Kieran McKeown, with inks by the amazingly named Kris (or Kirs as a typo has it. It’s worth mentioning that the font Titan use for credits is frequently hard to read) Justice. The art favours heavy toy reference, and yes, Elita-One has another head design. The action beats are all done well though, but the real issue is Mikaela is drawn so that... ahem... if she was to trip and fall forwards she’d bounce back up again. If she’d looked like this in the last issue, I’d have assumed she was visiting the hospital to get something for chronic back pain. 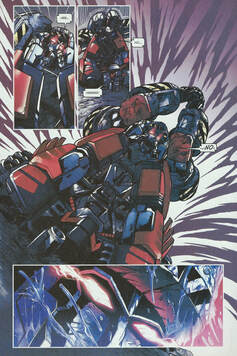 His first fight. Till we got stories before this.
The second part of Megatron: Origin is given over to what at the time was intended to be his first great act of violence as, in retaliation for the death last issue, he first throws his karaoke microphone at the senator and then, in a fit of rage, beats an Autobot guard to death.

Which gives us a nice grizzly amount of blood and guts flying about in the first art highlight for the story. But we do get the big problem in how Megatron is written here. He may not have been made a philosopher poet yet, but the IDW Megatron was already a verbose sort of guy. But across this comic he’ll be someone who mainly says “Heh” a lot. Which may be a mildly insulting attempt to show his blue collar origins, but it does again add to the sense of him feeling absent from his own comic.

Indeed, he’s apparently not even considered worth shooting despite being the instigator, as all the other revolting miners are mowed down around him as the issue ends. 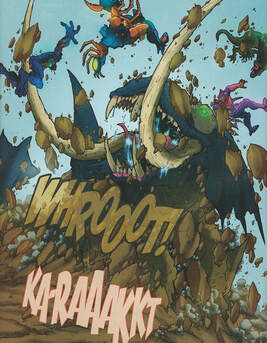 That guy again.
Beast Wars is basically a big fight this month, as Ravage’s Predacon militia launch a big diversion by attacking the Maximal base, so the Tripedacus agent can sneak in and attempt to grab... something that I’m not really clear of at this point, which turns out to be behind a forcefield and guarded by Razorbeast.

It’s a relatively nice fight, but by this point it’s clear all the big melee battles are going to look basically the same. Especially with the guy with the big tusks getting a full page spread to show off, clearly being a favourite of Don Figueroa. 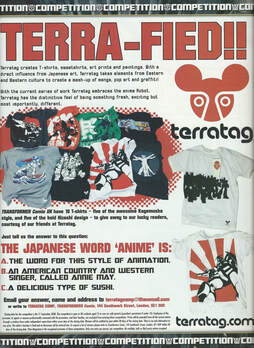 Terri-ble.
The big news of the month is that we now have a date for the Transformers Animated comic, so make a note in your blackberries, issue one hits October 23rd.

Team Titan heavily promotes the Star Wars comic in advance of the release of the Clone Wars film, whilst Team Titan Talks (which has its own Myspace page!) reveals that a giant bolder is released to chase staff when the Indiana Jones comic is running late.

There may be no Animated DVD competition or Top Gear this month, but Terra-Fied!! lets you win some generic anime robot t-shirts from Tarratag, if you know what the word anime means.

Our Beast Wars profile this month rather confirms the G1 bias with Ravage. Who can store up to 16 hours of video and audio on his cassette form. What a future to live in.

How to Draw... Frenzy takes the series back to just doing one character in a pose, though it’s still basically impossible to follow the instructions.

Artobots shows the breadth of the love for the franchise in younger readers, as we have an Animated Megatron (by Calum Frood, age 11) and Powermaster Prime (Ryuto Yamagata, age 8) rubbing shoulders next to one another. 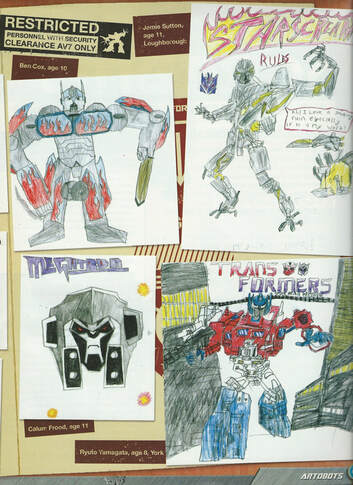 Three generations together.
The highlight of a somewhat grumpy Star Screams (“The film wasn’t that complicated. Do try and keep up”) is brothers Samuel and Harrison Price, who have sent in photos of themselves with the Autobrand shaved into the back of their heads by a responsible parent.

If you’ve not done the same, you’re a fake fan.

Next week: Two become one as Jazz returns. 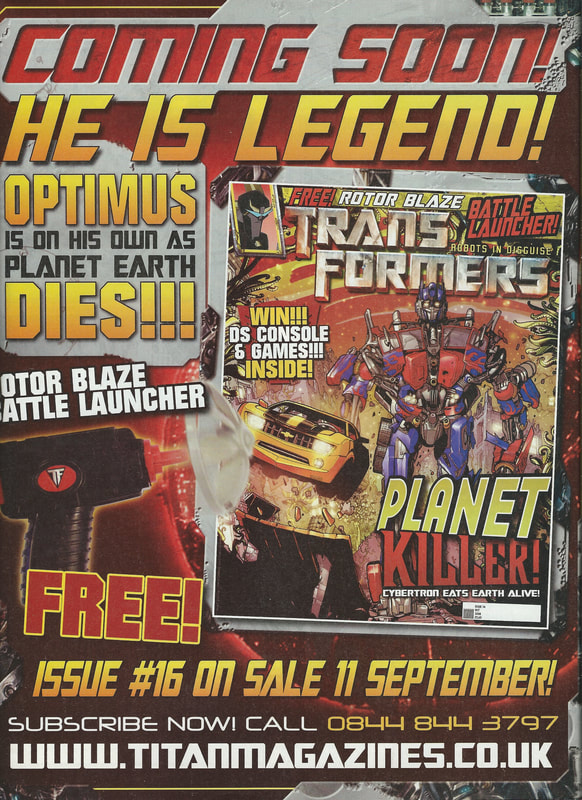