What's Cooler Than Being Cool? 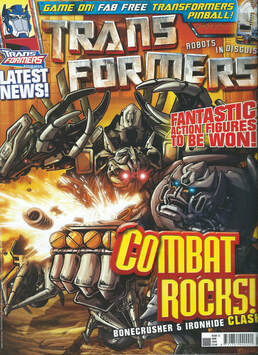 
I could do this all night!


Even I couldn’t be surprised by Bonecrusher being in this issue when he’s plastered all over the cover with the promise of a fight involving him inside.

As we come upon the penultimate part, it’s worth noting that the recap again emphasises the idea that history has been changed, in this case by the corruption of the Allspark. Now, this was originally intended to just be a five part diversion, only extended to fill the rest of the first volume after the positive feedback.

Which makes me wonder if the original plan would have been for the concluding part to see the timeline returned to normal as everyone battled over the cube, with the change being fairly late in the day. It’ll be interesting to see if that feels the case next week. 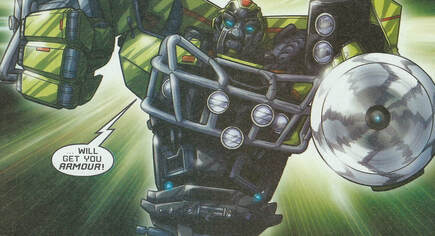 Pimp my Ratchet.
In the story I’m talking about this issue though, Twilight’s Last Gleaming: Part 4 is considerably more densely packed than the average Simon Furman comic of this period, as it moves all the pieces into place for the conclusion whilst still keeping up a high degree of action.

Starting with the promised cover fight, as Ironhide delivers a sicker burn than Sentinel Prime will deliver to him by telling Bonecrusher “Bigger ‘N’ uglier bots have tried, Bonecrusher. No, hang on, just bigger!”

Ratchet meanwhile shows off an amazing skill from the movie guide books as he simply absorbs handy metal from the walls to buff himself up with new armour and weapons. Which not only fits with the ease the film bots can change their forms, but it’s a much simpler explanation for Transformers drastically changing size than mass shifting. Yet oddly this fairly smart idea will never, ever appear again in any media. Still, even with these advances, they’re still outnumbered.

Though not doing as badly as Bumblebee, who is well and truly being trounced by a Megatron who wants to test out the Autobot’s fixed voice by provoking a scream, and apparently he can “do this all night”. No need to boast Megs. 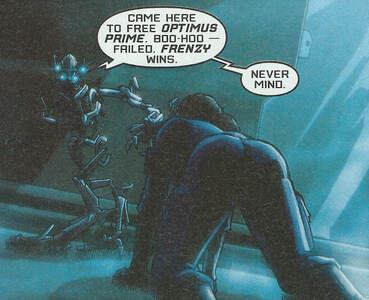 Some things don't change.
Mikaela is actually the only one having a good fight, tricking Frenzy into firing at the coolant tanks keeping Prime on ice, which not only unleashes a stream of liquid nitrogen which not only does the Boris in Goldeneye effect to him, but starts the Autobot leader defrosting. Then, not content to sit on her laurels, Mikaela runs to anther room (with Tom Banachek giving directions) where she finds... something in a glass tube.

Meanwhile, Bumblebee has some help as team Arcee turn up at just the right moment. Though, as Megatron is fuelled directly by the power of the Allspark, they seem to only provide a stay of execution once he starts swatting them aside like flies whilst doing a movie villain rant.

Luckily this is where an old friend steps in, with Optimus Prime swinging his sword arm and quoting the 1986 film (and also presumably what he said before Megatron beat him and had him frozen in the Mission City battle, so not a great call-back form him) with “One shall stand, one shall fall”. 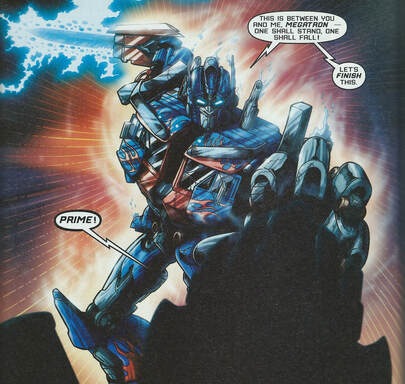 Spoiler: This will not finish this.
That sound you can hear is Ron Friedman claiming his cut of Furman’s fee.

All whilst Starscream, watching from above, declares that “The age of Starscream commences!”

Not to be confused with The Reign of Starscream, which is very different.

This is an incredibly strong issue, rattling along with an excellent pace, whilst still giving the various set pieces a chance to show off. And of course, it has the unbeatable excitement of seeing Optimus Prime back in action in the lead strip for almost a year. Though pretty much every character, even Frenzy, gets a good moment.

The art has pencils by Paul Ridgon, though the name on the inking is what stands out more, Andy Lanning. Who, as a writer in collaboration with Dan Abnett, is best know for reinvigorating Guardians of the Galaxy, but will soon be most infamous to Transformers fans for their extraordinary Heart of Darkness miniseries for IDW. Still, it continues the strong visual look of the book, even with it being impossible to tell if the one fembot who appears unnamed is Arcee or Elita-One as both have had the classic Elita-One head shape over the course of this arc. 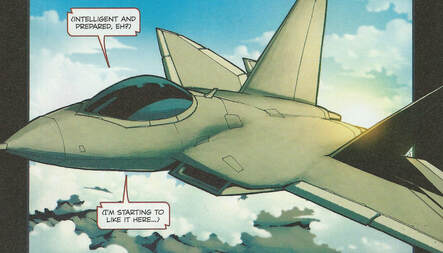 At least someone is liking it.
The short twelfth part of the Movie Prequel is given over to Sector 7 battling the Decepticons who have been lured in via the fake Allspark signal instead of their intended target. It’s a good, fun fight scene that sees the smug Starscream on especially fine form.

Though Sector 7 learning all the Decepticons alternate modes at this point and Blackout’s still managing to be a surprise to the US army a couple of year’s later is a bit of a fudge.

Speaking of Blackout, he flat out says “I could do this all day” at one point, almost the same boast as Megatron in the lead strip. Has the coincidence of these being printed in the same issue shown us a secret Furmanism? 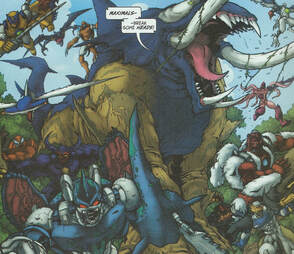 Head of the EU, Mr Tusk.
Beast Wars is another big fight as Ravage’s group finds the Maximal base at the exact same time the other displaced new troops all arrive, giving us a double page spread of just about everyone rumbling.

Except for Optimus minor, who sneaks in and removes the temporal thingamajig from Megatron so he returns to normal time, as Razorbeast prepares to make his final move. Which means its a cliff-hanger with Magmatron in jeopardy.

The double page is well done, but does mean, coupled with the decreased page count, this doesn’t really have time to get going this month. 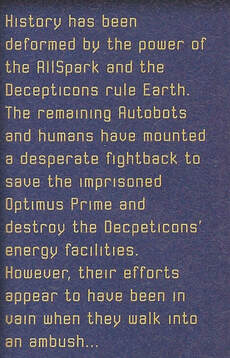 The Allspark backstory, hint of lost plots, or nonsense?
The free gift this month is a fun handheld Transformers pinball that is literally just a gift that’s clearly been given away with a lot of comics, but with a Transformers sticker slapped on it.

The Animated advance continues as the poster is once more double sides, with that series’ Megatron and Starscream on the reverse of the cover. The villain theme continues with the Bad Boyz Two! feature that briefly sums up their characters, whilst promising “Sensational” news for all fans next issue.

This is nearly as exciting as a competition for a Nerf gun set. Sadly not Classics Megatron. Top Gear also adds competitions for Transformers Risk, movie Camshaft and Classics Mirage and some of the small Titanium toys. The question for which, “Which Dinobot looks like a tyrannosaurus rex?”, so going to be confusing to Beast Wars readers.

How to Draw... Blackout is clearly taking the piss at this point, being “Draw an oblong, add lots of detail, hey, there’s a helicopter!”

Artobots again shows a cross-generational readership, with a Quintesson rubbing shoulders with Bonecrusher. 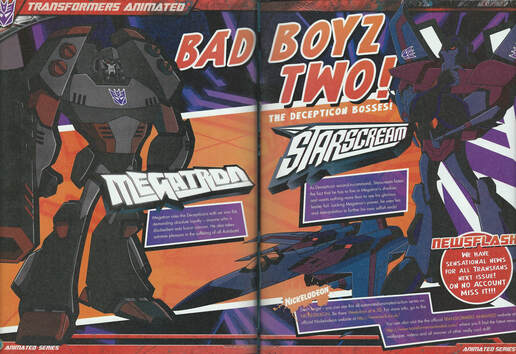 What'cha gonna do?
Star Screams (“gives the usual verbal abuse to our readers” as the editorial puts it) has Kyle Whittington send in a picture of his Optimus Prime fancy dress costume that is actually genuinely impressive. Especially how the parts can be put together to make a truck.

Another older fan, Mangal Khonkhon (“What a great name”) uses their G1 knowledge to ask about various characters, including Unicron. Which makes Starscream wonder about planetary indigestion. Maybe he’ll get chance to ask Unicron about it one day? He also clarifies the difference between the Allspark and the Matrix in a way that will actually fit in fairly well with Revenge of the Fallen, but says Prime has it, which won’t.

28 year old Elaine Scott sends in the most curious letter though, demanding the comic stop printing CENSORED pictures of Megatron. I think she means using the hoody character design. Otherwise, I don’t want to know.

Next week, nothing is censored as we reach the end of the first arc of this bold new direction! 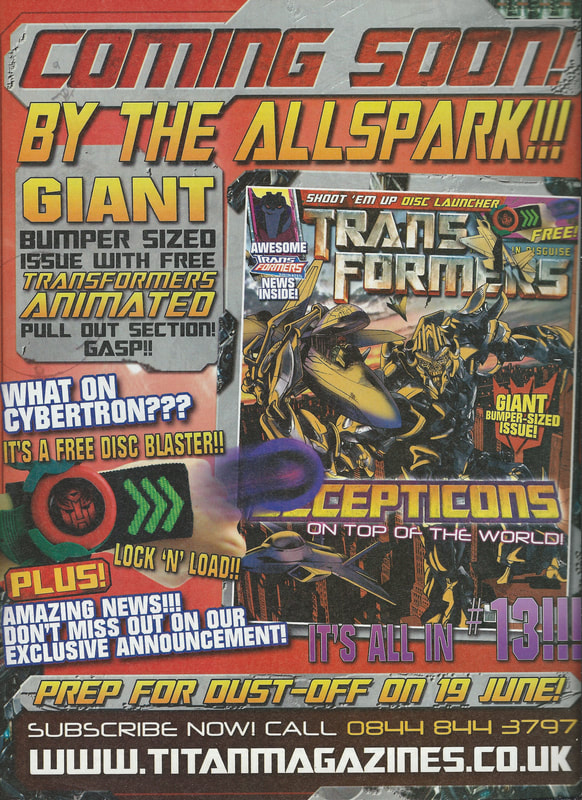