Ding, Dong, the Witch is Dead. 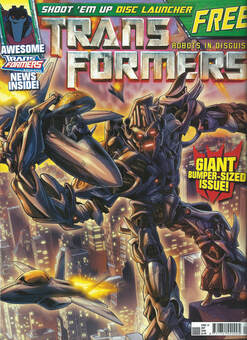 
I am unstoppable. Invincible. And you are not.


The King Kong homage cover boasts that this is a “Bumper-sized special”, and for once this isn’t hyperbole. Though the two main back-up strips are still shorter than usual, the lead is now extended to eleven pages (a symbolic moment, the comic is now the same length as the classic Marvel UK era) and we get a two page tease for Animated.

That means overall this comfortably has more comic content than any previous British Transformers issue, both in page count and number of strips. Which feels appropriate for an issue ending the title’s first year on the shelves with a wrapping up of all the current plots before a minor relaunch next issue. 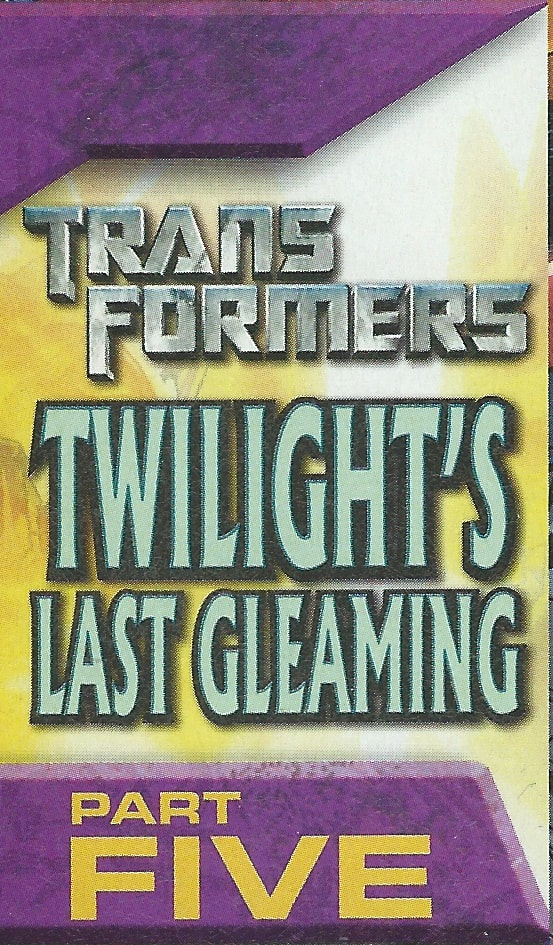 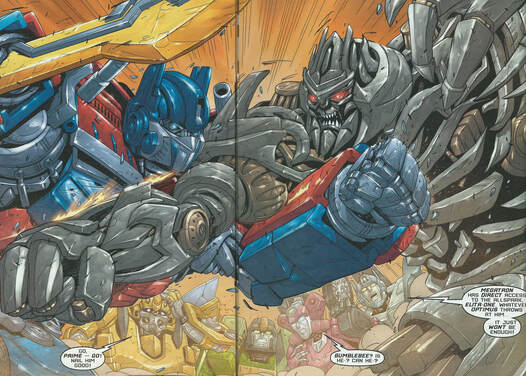 Give us a kiss.
The extra page for Twilight’s Last Gleaming was probably a last second addition as it isn’t used for extra plot or character development, but to open on a double paged spread (possibly the only one in the series) of Prime punching Megatron. And that’s despite the issue being fairly packed with incident.

I wondered last time if it would be apparent if this part had been changed from the original intent of ending a self-contained five part story, and there are definitely signs of that throughout. Starting with the fact that the half of the moonbase team that have come to Hoover Dam (I think I forgot to mention the group had split in two, with Elita One and Arcee on each team—with different designs again—making it easy to tell them apart for once) stand there and watch the fight without actually doing anything. Strongarm (though the speech bubble are pointing the wrong way on this panel) even asks if maybe they should do something only to be shot down by Elita-One saying they need to stick to the plan... before they do exactly nothing.

One has to wonder if there was going to originally be something for these characters, or they were always going to slip through the cracks.

The fight itself though is great, with Marcelo Matere doing some incredibly strong art that makes the year wait to see Prime (who feels he was too lenient in their last fight, mirroring his more brutal development in the films) take on Megatron again. The Decepticon makes it more fun by just being so gleeful at how his link to the Allspark doesn’t just make him strong, it instantly heals any wound. Meaning it looks to be a very short resurrection for Prime. 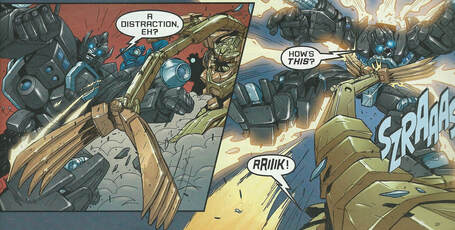 How does that grab you?
Which is where the two groups actually being helpful come in. Over in Georgia, Bonecrusher has started speaking in alliterations for no readily apparent reasons (“...the maestro of murderous mayhem”) is incredibly smug about how Ratchet and company can’t stop him and destroy the Allspark...

Before they effectively do by Ratchet shooting up the conveyor belt that is mining... something or other from the Cube. This definitely feels like a last second shift as it and the resultant explosion comes across as a tad anti-climactic. In keeping with the way the surrounding material in the comic has described it, I suspect when this started the intent was to do something with the corrupted Allspark to put history back to normal.

There’s a sense of a last second ass pull with Mikaela and Bumblebee as well. Though it’s pleasing to see the human acknowledged as the one doing all the important work. In turns out the not hinted at before last issue thing Mikaela went to collect was a Transformer killing virus that Sector 7 had made from their study of the Allspark and Megatron. 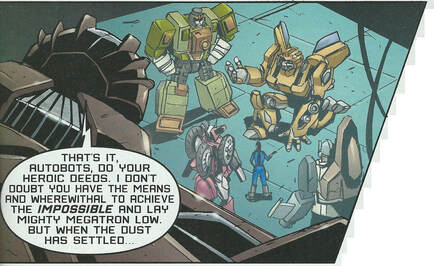 It is impossible Sector 7 had that virus all along.
Which they never thought to use during the events of the film (or at least this timeline’s version, let’s be charitable and assume this is another difference between the two histories).

Which I suppose might be the first accurate portrayal of the incompetence of Sector 7 in the comics.

Still, cut from the healing power of the Allspark, the virus works on Megatron and successfully turns him into the Wicked Witch of the West as his dissolves in a pleasingly grizzly way, leaving a happy ending for both the Autobots and the scheming Starscream, who has been cheerfully watching and picks up the last remaining tiny bit of Megatron to gloat over as he plots how he is going to avenge the fallen... I mean Megatron by rallying the troops around him.

This issue is a bit of a mess. I’ve speculated because of the changes made as the story was being written, but you never know with Furman if he’s just failed to stick the landing once again.

However, despite this, there’s lots of well realised action and character here, with a pleasing sense of pace to events. Though it has been a bit more all over the place than I remembered, the entire story has still be a game raiser for the series, and it’s easy to see why Titan and Furman decided to extend this arc for the remainder of the pre-Revenge of the Fallen comics. And that’s going to take us to some interesting places. 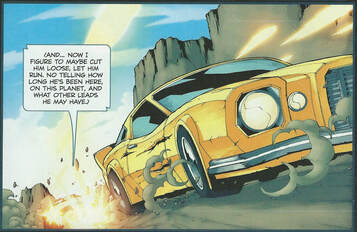 Bumblebee, off to watch his Breakfast Club DVD.
After an advert for the second issue of the Indiana Jones comic that ironically has Shia LaBeouf on the front, the Movie Prequel wraps up with a typical whimper as Simmons successfully stops the Decepticons downloading Sector 7’s files by pulling a wire, so they decide just follow Bumblebee about for four years instead.

That rather sums up this series as a whole, lots of time spent telling you things you didn’t need to know to enjoy the film. And I’m rather relieved that Titan are going to take the on the surface surprising decision not to feature any of the other IDW film comics. 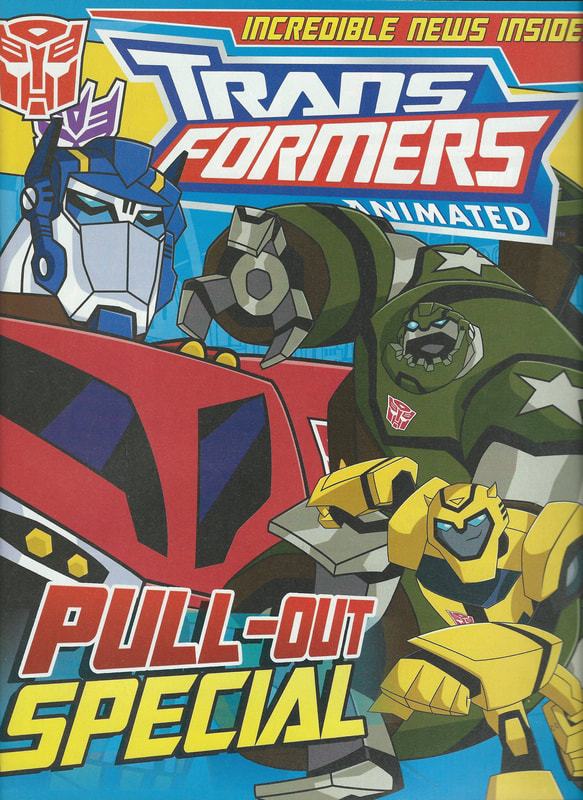 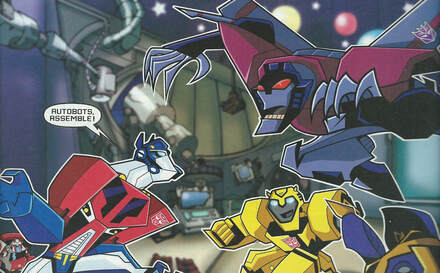 Starscream just heard the name Fanzone.
The Transformers Animated Pull-Out Special is designed to promote the “Incredible news” that the new cartoon with be getting its own comic later in the year (though the exact date isn’t known yet). As well as the various features I’ll talk about in a moment, there is a two page strip credited to a bunch of largely unfamiliar names (though colourist Kat Robinson is actually Kat Nicholson—now Kat Cardy—suffering from an odd type), including writers Ned Hartly and Andrew James, plus art from Diego Jourdan Pereira.

The Wiki suggests this is an extract from a longer strip that wound up never being printed. But considering the format is to use a visit to a planetarium to allow the Autobots to recap the format of the show to their human pal Sari, I suspect this was written specifically for this purpose and the cliff-hanger of Starscream attacking is just a tease rather than there having been a page three. Still, the “Autobots Assemble!” line is a fun gag.

On those terms, it does what it needs to, even if it’s not that exciting and makes you wonder how it took two people to write it. The foreground characters are also fairly obviously separate drawings from the background on most of the panels. 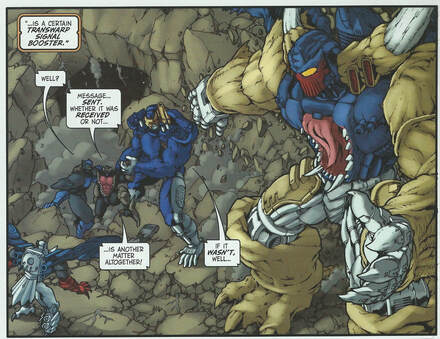 Come back next week to find out if the message got there!
The final part of The Gathering is just concerned with mopping up after Magmatron is sent back to Cybertron by himself and no one is sure if the message got through or not. That leaves the new Predacons licking their wounds before they regroup and the Maximals building a nice Planet of the Apes style base whilst resolutely refusing to join in the Beast Wars because timeline or some other such nonsense.

This hasn’t been quite as bad as I remembered, I suspect the next mini is where the wheels really come off, but it hasn’t captured the spirit of the series and has wound up feeling rather lacklustre.

The free gift is another disc shooter, by now kids must have blinded a fair few cats by accident, and the poster is once more revisable with the cover and an Animated image on each side.

The movie based features includes a new one, 9 Reasons I love being..., where a Transformer talks about what they like about their alternate mode, starting with Blackout and Starscream. Who enjoys being slinky. 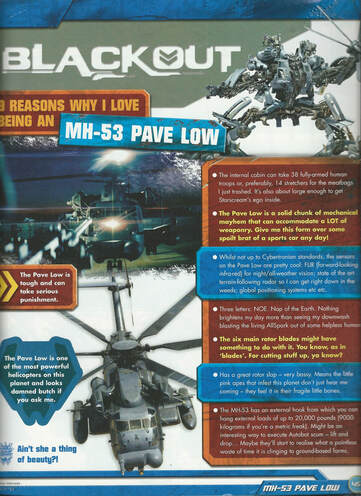 Yes, I know. Terrible scanning.
(as you can see, my attempts to scan one of these for your delight shows the deficiencies of having a slightly too small scanner especially well)

Top Gear covers and has competitions for a Transformers: Animated Prime and Megatron double pack; Revoltech Hot Rod and the Best of Transformers Volume 1.

How to Draw... A Battle Scene suggests that drawing some vague circles will lead to a not very good mass Transformer fight.

Of course, it’s the features in the Pull-Out that stand out. Including a two page advert for the new comic.

Dinobots introduces the Animated versions of these characters with short profiles that confuses Snarl with Slag, whilst Decepticons does the same with the main villains. State of the Art gives a quick overview of the main toys.

The World of Transformers: Animated gives the basic set up of the series and the human characters. Including Captain Fanzone.

Whose first name is apparently Carmain.

When I mentioned the horrendous placeholder name nature of this on Twitter lots of people were keen to berate me for not loving the genius of Fanzone (Fanzone. Fanzone) and that he’s totally named after a totally real person the show-runner knew.

Which, yes, it’s a technically plausible name, but then so is Hunter O’Nion and no one gives Furman the benefit of the doubt over that. Hell, I went to school with a guy called Roger Rainbow, I wouldn’t use that name in a cartoon though. 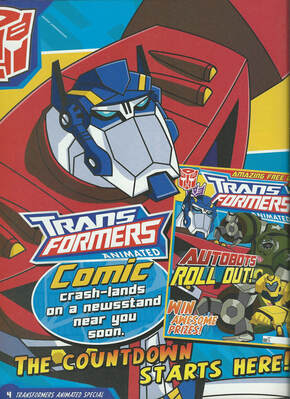 Starscream gets a letter from Karan Sudra, 13 from Crawley, talking about their experience meeting the TFUK team at London Film and Con, with the Decepticon revealing Steve White has just come back from one in Bristol covered in lipstick kisses.

Next week, it’s all new strips and the posing of the question: What happens after you win? 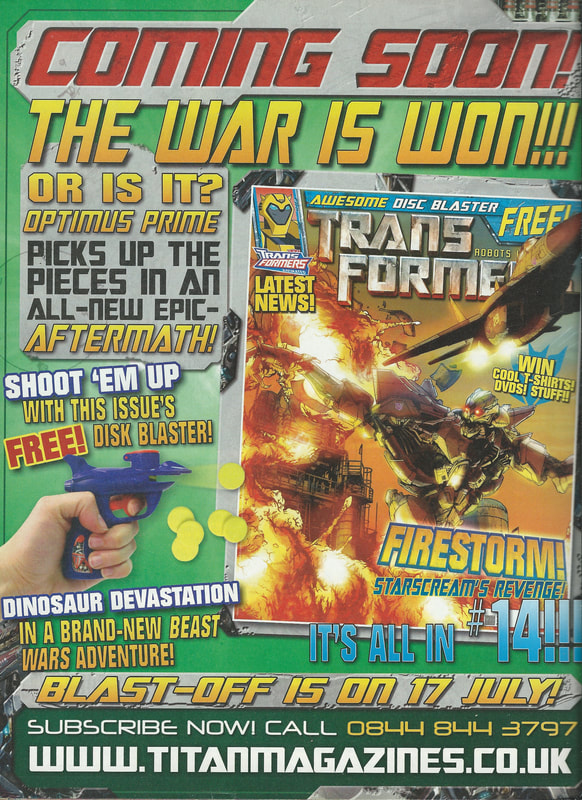