You Don't Fool Me. 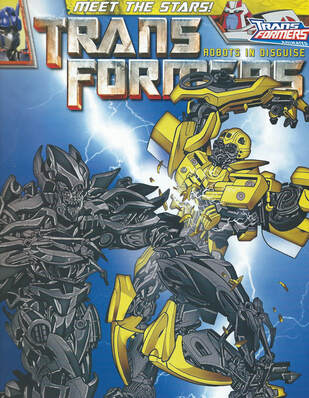 
We’ve a somewhat unusual cover this month, as it looks oddly naked compared to previous ones with an almost total absence of text. This was because it was originally in a bag to contain the free gifts (of a huge variety of stickers), with the usual !!!! laden words on that.

In theory this is a plus, giving up a purer cover with cleaner art. In practice, it’s designed with gaps for the text so there’s a lot of odd negative space and Gary Erskine’s Megatron slashes Bumblebee effort is not as strong a cover as some of the previous ones we’ve had that would have been nicer to see in the flesh. As it were.

There’s also a slight format change this month as the title of the British story is now presented in the same way as for the reprints, within a border around the opening art that includes a recap. Presumably because the story has run long enough for it to have become a worry kids might be losing track of the plot. 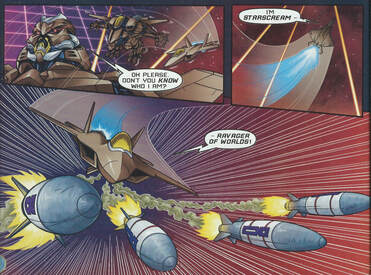 Hi ravager of Worlds, I'm Stuart.
Which is ironic as the third part of Twilight’s Last Gleaming is probably the most straightforward yet, with a large chunk being given over to Starscream and Scorponok chasing the Autobots about on the moon to force them into launching their attack so they can pose a threat to Megatron.

This is arguably padding. Arcee’s team was always going to attack anyway and didn’t need an exterior threat to make them do so. But it’s four pages of immense fun, with Starscream on fine form, shouting “I’m Starscream, ravager of worlds!” with utter glee as he firebombs the team. Despite his backstabbing here, this feels far closer to the film character than anything we’ve seen so far. Competent, deadly and just loving being a killer jet.

The Autobot team are pretty stock, but they’re generally solid stock, with a nice visual of them turning into protoform modes rather than their toys alternate forms. Which creates a mildly disconcerting mix of styles, Energon toys turning into movie ones. 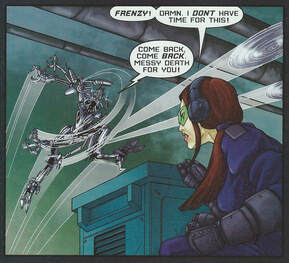 He's back!
On Earth, Megatron works out the reason Bumblebee isn’t fighting is because he’s being a distraction for some human, and by threatening to go get them (and showing off his knowledge of nursery rhymes) draws the Autobot out for what he intends to be a one sides curb stomp.

This part is, again, fairly stock (and feels like Vader goading Luke into attacking in Return of the Jedi), but Bumblebee’s overwhelming desire to protect Mikaela after his failure with Same is nicely understated and gives it an extra kick.

Mikaela actually gets the best bit of the issue and she recognises the sound of the (now English speaking) Frenzy’s spinning blades and successfully dodges them. Before pointing out she did pretty well in their last fight and this time she’s someone who has been through a hell of lot more and isn’t going to take any shit from him. It’s a nice, strong defiant moment. 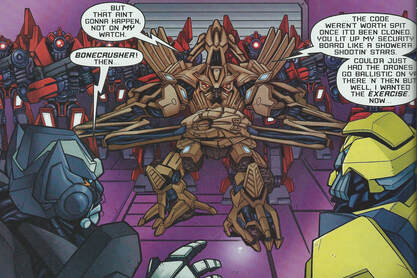 He's back!
In Georgia, Ironhide and Ratchet think they’ve successfully infiltrated the base by, in a nice touch, scanning the alternate modes of the convoy they attacked and adopting their forms (in vehicle mode anyway, I’m not sure if their robot modes being unchanged is a goof or not) and security codes.

Unfortunately, this disguise didn’t fool the security chief, who just let them in so he could beat the tar out of them personally, so they find themselves surrounded by drones and the now talking like a cowboy Bonecrusher!

I must admit, every time Bonecrusher appears in this comic, I just assume that it’s the last time he ever appeared in anything. But he keeps coming back. Was him avoiding his death in the film what guaranteed Decepticon victory?

This isn’t a very cohesive issue, with a lot that could have been cut to make this a four part story. But all the individual moments are nicely done, with enough interesting twists on some very standard situations to stop them feeling tired.

On art, another new talent for the series (though they had done bits and bobs for Dreamwave), Fabio Makoto Ono does some very nice work with a lot of energy to it. Though, again, Elita and Arcee have changed designs. With Arcee being very much inspired by her IDW namesake. 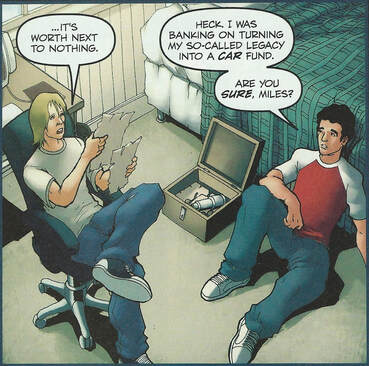 Milo's life is pain.
In order for issue 14 to launch the book’s second year with a clean slate of new stories, the reprints are cut down to just five pages this month. For the Movie Prequel, this means we just get Sector 7 waiting for Bumblebee whilst Simmons gives Very Serious exposition about how his family have been doing this for decades.

Meanwhile Sam and Miles discuss how they’ll have to wait a couple of years to sell Archibald’s stuff for a car fund on an Online Auction Site. Which is amazingly awkward dialogue, can you not just say “EBay”? How hideous Milo looks is also a good sign of why Don Figueroa never made it in non Transformers work, his humans just aren’t good enough.

The issue ends with Bumblebee approaching the trap, as Barricade approaches him. So at least we should get some action next issue. 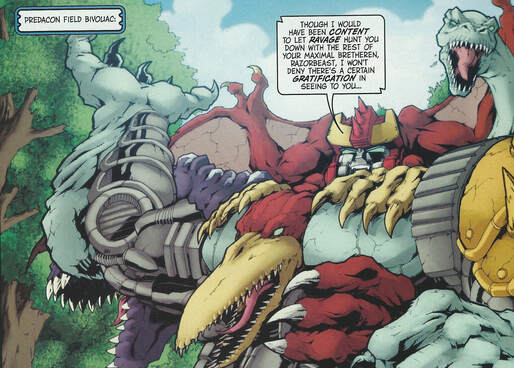 "My eyes are up here... and also down there"
Beast Wars sees Ravage find and attack the Maximal base as they try to buy time to get the message out.

The big thing though is Razorbeast using the temporal displacement thing to phase in and out of the same time-frame as Magmatron so as to run rings around him.

Which flat-out confirms that he could de-phase and go get help from Optimus Primal and company at any time.

Just prior to this issue being released, the IDW reprints of the first 8 issues were announced. So it’s fitting that the first trade collecting the opening six issues is now out, in the tiny pocket Transformers Adventures 1 trade. This three book series will be the most we will see of the book collected, and can often be found in branches of Forbidden Planet for a pound, even now.

It shares a double page advert with Titan’s attempt to keep their collections of the Marvel series going now they’ve basically done all of it with Best of Transformers Volume 1 (there would be no volume 2, though it was planned to contain Budiansky material), which basically contained the bulk of Furman’s Marvel US run. Despite the cheapness of it reusing a cover from a previous Titan trade that doesn’t reflect the material within, this was actually quite a nice way to get a big chunk of the series that, again, can still be found pretty cheap today. 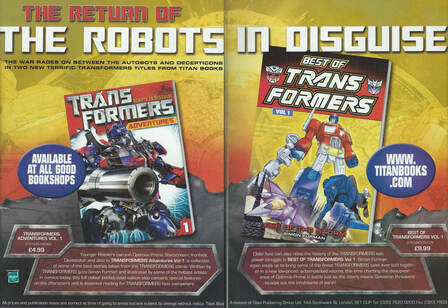 They return!
The poster is double sided this month, as well as the cover the promotion for Animated continues on the reverse with a Team Prime group shot. Which leads us into Prime Candidates! Meet the Autobot Stars of Transformers Animated, which has stock art and brief character descriptions of the five leads.

How to Draw... Barricade V Ironhide claims to teach you how to create an amazing cover style image, but basically it’s “Use what we’ve said before” repeatedly before you get “And just draw a cool background”.

Top Gear has promotion and competitions for the Ratchet themed AllSpark Blaster and the Screen Battles themed toy box-sets. Which asks what Bumblebee lost in the film, with “The will to live” being the answer a lot of people who don’t like Bay would give.

Artobots is a full two pages of reader art, only one of which is definitely based on the How to Draw feature, showing what a success it has been.

Star Screams has Emily Carter from Hampshire say (in cool text speak) her mum and auntie think she’s too old to be playing with toys at 13.

Starscream responds to this by sentencing the mum and aunt to polish his armour for all time.

And for some reason a Millwall football club website has recoloured some Dreamwave stock art of Prime in the team colours. Which for some reason the comic has reprinted. A fan on the team, or long overdue payback for the dig at the team on the Deadly Games! cover? 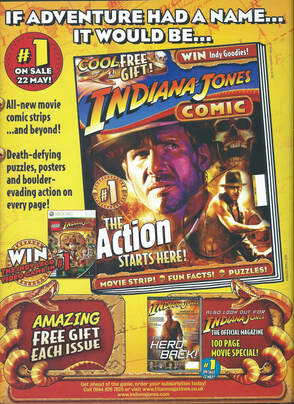 A literal indy comic.
A sign of the success the book has enjoyed is that Titan are attempting to repeat with a comic tying into Indiana Jones and the Kingdom of the Crystal Skull. As they already have Star Wars, they’re basically trying to get the Marvel UK franchise band back together.

And as with many of Marvel UK’s attempts to repeat the success of Transformers, this won’t stick. Either because the film won’t be that well received, or the advert isn’t that well put together. With the tag-line seeming to read “If adventure had a name, it would be Indiana Jones Comic”. Which isn’t so catchy.

Next week, the Bonecrusher of contention. 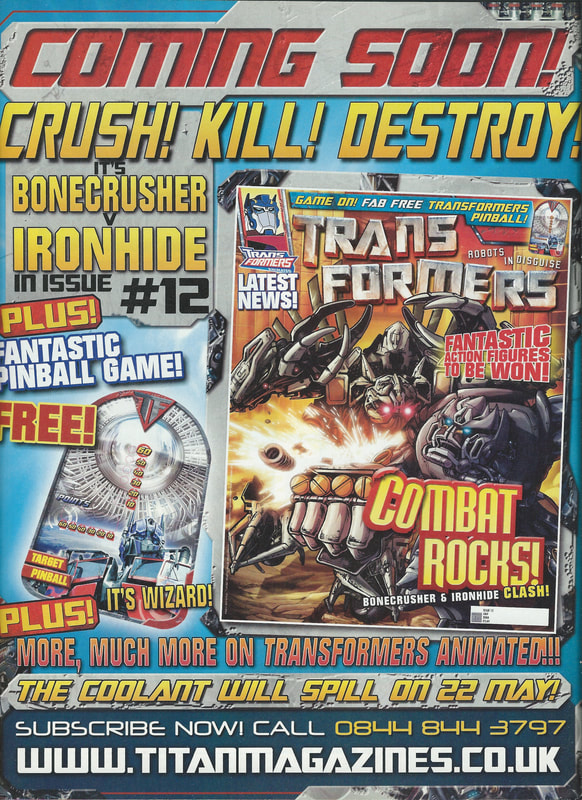