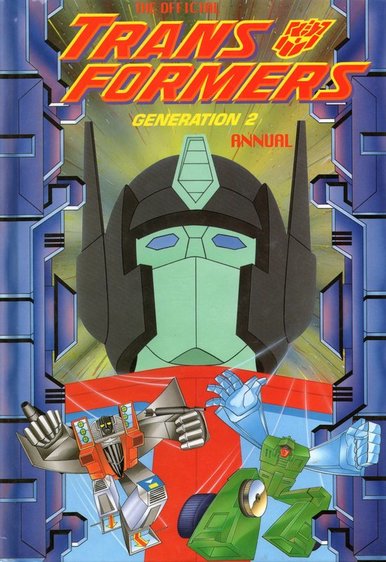 
From Cybertron to Earth the War Continues.
Day of the Decepticons.
Moving Day Planet Earth.


Hey who said anything about this being over?


In many ways the Generation 2 annual brings us full circle, being printed by Grandreams, who had their logo on the first couple of Marvel Annuals. Which is important as, despite technically containing the first British Transformers comic fiction which makes no attempt to be part of Marvel continuity (here the Cybertronians have never left Earth, nor met the Dinobots previously) there are all sorts of incredibly niche references to the old comics that suggests at least the first Annual and The Complete Works Volume 1 were to hand as this book was being created.

The most obviously thing to note about the book as a whole is how poorly put together it is, possibly as a result of a last minute decision to do one. Nearly everything outside of the comic bar the spot the difference and profiles (which oddly look like random grabs from the comic but are actually new art) is reused toy packaging. And as Grandreams clearly didn’t have much of it from Hasbro, the same drawings get used over and over again. Most notably a piece of Optimus Prime art that isn’t his box art (though that does get used twice) which appears three times.

The prose is also full of typos and bad writing. The standout being that the profiles for the newly built on Earth Piranha and Hotrod (the UK changing the names of some of the toys makes this Decepticon very confusing) both being called Generation 11 Transformers, when it presumably means Generation II. And if it can’t get the basic name of the franchise right, what hope is there for anything else? 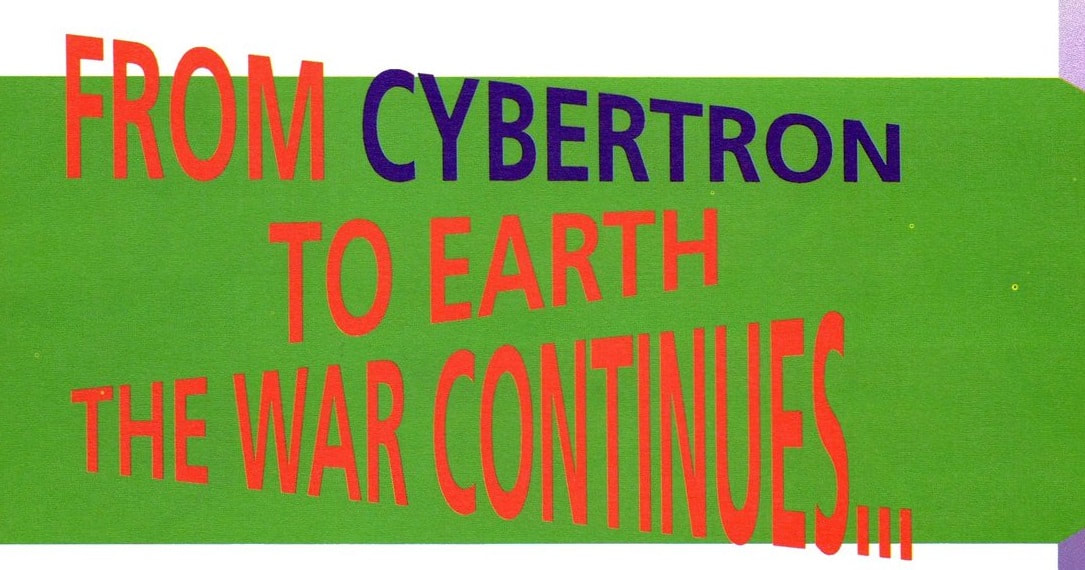 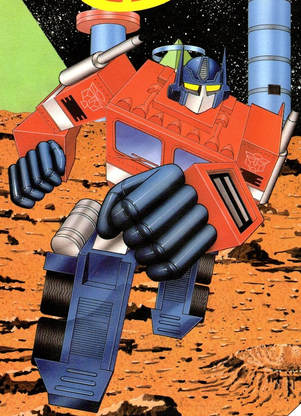 Optimus Prime practising his happy look.
As was traditional with the previous Annuals, we open with a recap of the story so far that basically covers the first four American Marvel issues with a little bit of And There Shall Come...A Leader! Though the details get less accurate towards the end of the American miniseries as we’re told the Decepticons successfully created energon cubes from their captured nuclear power plant and they failed to contact Cybertron using a NASA satellite. Which suggests either they wanted to create a vague endpoint for their new stories, or there wasn’t a copy of The Complete Works Volume 2 in either the office or Oxfam.

All of which gives us some strangely specific references to things like Megatron planning to turn Cybertron into a battle station and a name-check for Fortress Sinister.

Despite the basic writing, this is a solid recap and probably the best part of the book. 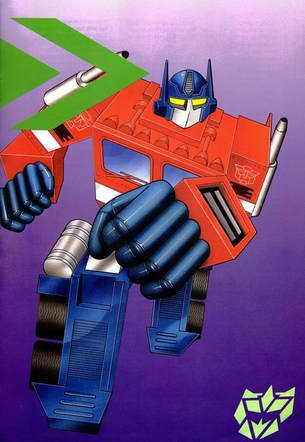 Optimus Prime practises his sad look.
First text story Day of the Decepticons (there’s no credits for either writing or art anywhere in the book), is also basic. A smug Starscream has overheard the Autobots have found a buried ancient Cybertronian spaceship (Man of Iron inspired?) on Table/Tabletop—depending on the page—mountain in Africa. Leading to a full Decepticon attack that ends with Optimus Prime calling retreat!

But, as the Decepticons board the ship and their first ever chance to go home, it turns out to be a Jeremy Beadle style prank as the whole thing was set up by the Autobots to blast the Decepticons into space for a bit so they can have a rest. Leading to a closing pun of them wondering if they should call themselves Decepti-bots now.

Despite not much happening, there’s some fun writing here, such as Megatron being so happy at Starscream having found a way off Earth that he decides to reward him by letting him become his personal servant on Cybertron and the revelation the Earth authorities have given up trying to keep on top of the warring robots and just let them get on with it these days. 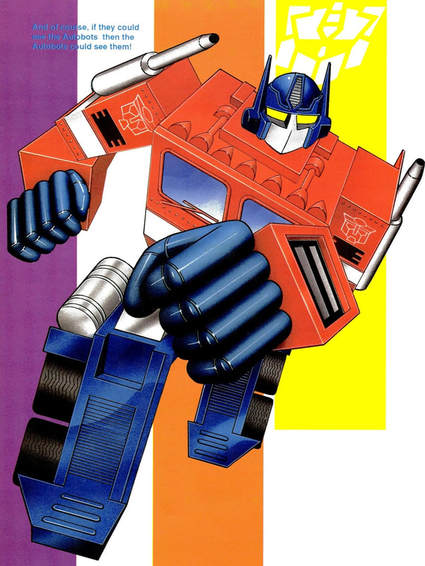 Optimus Prime practises his angry look.
The comic, Dinobots!, is notable for having an establishing shot of the Ark that is clearly based on the Geoff Senior one from Crisis of Command! that was cut and pasted into the US first issue in The Complete Works Volume 1, again showing the main reference point for the book. And a lot of the basic Will Simpson-ish art also has a familiar ring to it, though I can’t directly place any of the other references.

This story starts off looking like it’s going to have an ecological message as it talks about deforestation in in Brazil, as destroying the habitat of local plants and animals inadvertently wakes up Snarl and Grimlock, who dramatically burst out of the ground. However, this angle is never mentioned again.

Instead, the Autobots (on the Senior Ark) and Decepticons (including Soundwave and Rumble, again suggesting older reference points) descend on Brazil to find out what’s going on and get into a fight. Which is ended by the shock revelation the two Dinobots are Autobots who proceed to chase Megatron off.

It then turns out the origin of the “Four” Dinobots was broadly the same as in Marvel, woken up early and turned into the local dominant lifeforms of dinosaurs (the crash presumably having happened a lot longer before in this Savage Land-less world). But instead of fighting Shockwave they hung out with the real dinosaurs until that pesky meteorite caused an ash cloud that blocked out the sun and stopped their solar panels from working, leaving them asleep till now. The story then ends with Grimlock going off to find the two missing Dinobots.

The real highlight of this story though is Blaze (or Fizzle if you’re old school), who in the middle of things gets a big dramatic speech about how they are the only one left who can stop the might of Megatron... before the Decepticon leader just swats him aside. Otherwise, this is rather forgettable.

Though again, the fact that the G1 colour schemes are used for Prime and the Dinobots emphasises there’s older reference material being used here. 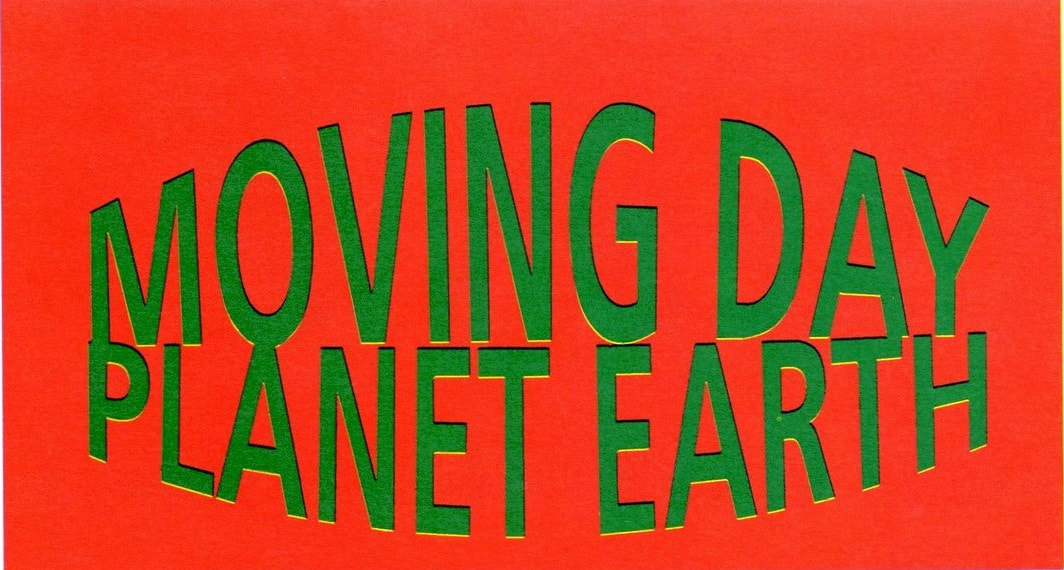 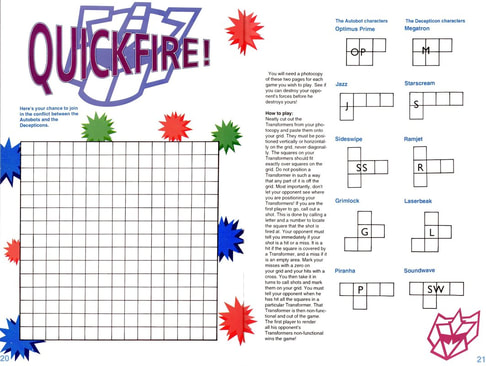 But where's Optimus Prime?
This however does better than Moving Day Planet Earth. This text story, in a plot that feels like someone had seen Rebirth, sees Megatron prepare to turn Earth into a mobile battle planet. The Autobots then stop him by blowing up shit. And that’s it. Making for what is likely the least distinctive Transformers story of all time.

The rest of the book includes the usual paraphernalia, including a word search, quiz, spot the difference and very odd and hard to describe grid game that requires you to photocopy the page.

The short profiles are more interesting however, covering Optimus, Sizzle, Blaze, Piranha, Sideswipe, Jazz, Megatron, Soundwave, Rumble, Hotrod, and Ramjet. Which use all sort of minor details from the early Marvel days, including how Prime rose from the ranks and that Megatron used to be a gladiator.

The book has the general reputation of being terrible, but to be honest it can hardly manage that. Despite a few moments of fun and curiosity, it’s incredibly bland and not a little shoddy. A book very much for completists only.

Next week, it’s the final issue of our short lived UK Generation 2 comic, plus an overview of the parent American series in its original context.