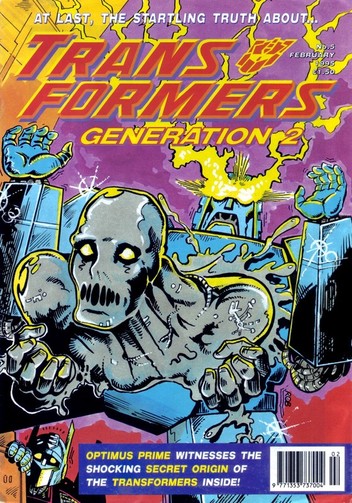 
Did you stop to consider why we forgot...that perhaps we weren’t meant to go any further?


With none of the other Transformers comics having that 332 issue staying power, end of an era posts are going to come along like buses with Bradley Walsh sitting sadly on one of the seats, but the fifth issue of the UK Generation 2 comic is a key finale in more ways than one. The end of over a decade of semi-regular publication (if you count the specials that bridged the gap), the final British issue to be in Marvel continuity and the final one of the 20th century. It also has one very significant legacy we’ll discuss at the end of the piece.

What is perhaps not so significant is the actual contents. Something that is perhaps best signified by the cover. For years, when working from low res scans, this was assumed to be a straightforward blow up of interior art. Instead it’s a closely copied original meshing three panels, the watching Prime being the main giveaway. Considering that the image of a goop bursting out of a generic makes no sense of out context it’s a very bizarre choice, something based on Optimus Prime falling into his induced vision would have been more of an attention grabber.

Also, the reproduction on some of the interior pages is incredibly poor, looking like a quick and dirty photocopy.

The story itself, the other half of US #5, is low on action, but is a key issue in the development of the series. Which is great for issue 5 of 12,but does mean that as a climax it rather falls apart into heavy exposition. 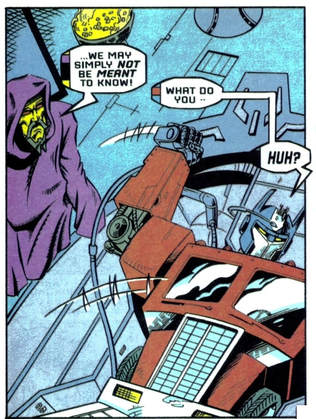 Jaundice Scourge.
On Cybertron, and G2 is pretty much the only time in Transformers where a lasting peace exists on the planet isn’t under threat or ruined (indeed, Scourge Wheelie and Blurr are all having a Sunday morning drive on the establishing shot) Optimus Prime is preparing to undergo a dangerous and difficult vision quest with the help of some SPACE monks (with beards) who have plugged him into the heart of Cybertron.

The Monks already seem to know what’s going on and that a serious threat is posed, but of course, just telling Prime what he needs to know rather than risking his life with something that’s never been tried before (so did they make the trick table that drops him into the core especially?) wouldn’t be dramatic.

We then have the first of a couple of cutaways that are irrelevant in the context of this being the last issue. The first sees Jhiaxus on a planet his troops are Cyberforming, annoyed that the bait he has dangled at the Autobots by attacking more worlds hasn’t brought them out of hiding. This is mainly to keep his threat alive in what was a couple of US issues that didn’t feature him (though it also serves as a contrast to the origin we see for him later), but is of little consequence here.

The cover tag-line promises us the shocking secret origin of the Transformers, and Prime’s vision picks up on this, starting with what we know, the birth of Prima, crawling out of the planet’s surface in the early days of Cybertron.

So far, so familiar and even Prime is wondering why we’re revisiting something we’ve already covered. Which is when the series attempt at a big game changer happens, as he skips forward in time and, after initially being confused as to what he’s seeing (a punishment? A ritual?) Prime realises the agonised glowing robot he’s witnessing is actually giving birth. 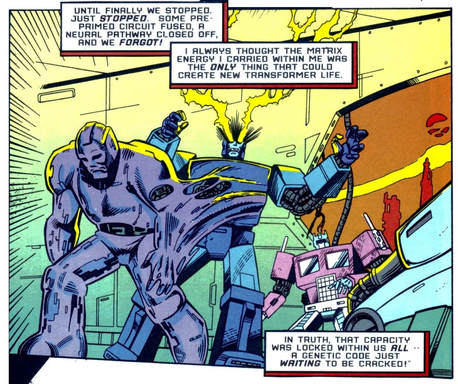 Definitely not less likely than the newborn being a "She".
Which is when we get out next cutaway, Autobase and a training exercise that really does add nothing to the plot beyond Kup wondering why he thinks of Hot Rod as young when all Transformers are really the same age (poor old codger has forgotten most of the last ten years it seems).

Back in the dream, Optimus pieces together what he’s seen. Transformers were not all created by the Matrix, at one point there was what he calls “Bio-morphic reproduction”, where Transformers split like amoeba to birth new members of the species. An entire way of procreation that Primus erased from the memories his children before it could dilute the species too much.

Which was then rediscovered in the four million years when Prime was on Earth and produced all the Decepticons who left Cybertron, including Jhiaxus. Which enrages Optimus, Primus wanted them to forget and those created since have destroyed the purity of their race to a greater extent than even Megatron has, becoming soulless evil beings with no morality.

Now, I’m old and creaky enough to remember when fandom, myself included, thought of this—more commonly called budding—as a clever and inventive SF take on the mythos that makes the Cybertronians truly alien rather than people in cosplay.

These days, more than anything else in this series, it’s what new and younger fans tend to hold up as awful and rubbish. To the point my good Podcasting friend and all round awesome person on Twitter Becka described it to me as “The worst idea in all of Transformers. And I’m including KISS Players”. And that’s one of the nicer reactions you tend to see. 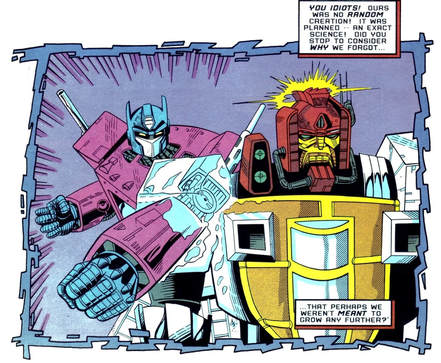 Impure bastard.
Why? Well, we’re back to our old friend of Furman not being very strong on ideas of gender and sexuality, constantly writing the characters as gendered whilst insisting they’re not. And it can only seem incongruous to someone coming into the franchise now that they last bastion of “Female Transformers are unrealistic for robots” thinks that a robot pooping out another is a perfectly normal and realistic thing to happen.

It also brings up back to the uncomfortable eugenics ideas that Furman toyed with at the end of the Marvel run and will go full out on with the Gene Key idea in ReGeneration One. Decepticons have sullied the purity of the race, but the Cybertronians have gone one further by being inherently without morality just by how they were born. And as ever (and suggesting this is very much a case of Furman simply not having thought through all the implications of what he’s written rather than actually being pro-purity) it’s at odds with how he actually writes the characters. Jhiaxus is a villain, but he’s a complicated and conflicted one, his origin makes him less interesting as a character.

Which ends the series on an uncomfortable note, making it easy to miss the cliff-hanger of Prime coming out of his vision early and missing that the farted out Transformers shed a skin that collected and flew off into space as the equally soulless Swarm, the gas cloud that will be the big nasty McGuffin of the end of the series. Not that we’ll see it, even with the NEXT caption having been left intact again. 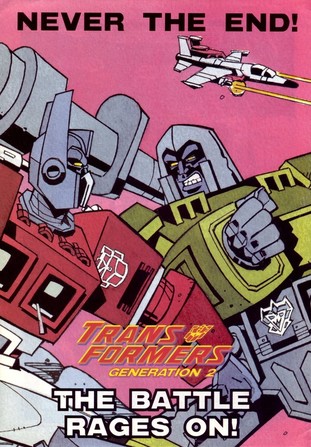 SPOILER: It is the end.
For the final issue the gatefold poster is based on the Autobot training sequence and is easy to attribute this month as Robin Smith’s signature is clear and large, despite the art trying to ape Galan more than his own style. The letters page is also given over entirely to kids art, featuring a lot more accurate colour schemes than the actual comic.

For all the terrible poster on the back page (a zoomed in look at part of the gatefold from issue 1) promises “NEVER THE END!”, the British version of Generation 2 whimpers out in a way that means it would not be well remembered if not for one thing.

That thing coming on the editorial. Where space is given over to promoting one of the many Transformers clubs out there, this one being Transmasters. Unlike the letter in a later Marvel issue they don’t try and promote it based on how many wives they’ve given Blaster, but instead on the fact that Matt Dallas has permission from Hasbro to write and produce unofficial fiction that continues the story of Generation 2. 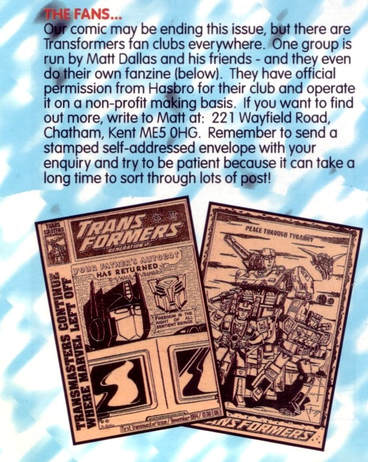 The future starts here.
Which was a shame as this was a lightening rod to the British fandom. Most notably to young Nick Roche (unsurprisingly James Roberts had been there from almost the beginning), but so many people still active in the fandom replied and connected and worked on their shared fictional Universe together for years, building bridges and creating the backbone of the British community. How important that was can never be understated.

But that’s the key thing with Transformers, even when the fiction occasionally falters it still inspires and fires the imaginations of readers, viewers and even toy players in ways no one involved could even have imagined. As I end my look at the Marvel continuity, it cannot be emphasised enough how this is its real legacy and a greater one than the sum of its parts.

But before I move on eight years, we hop across the Atlantic to look at the rest of the series the British missed.