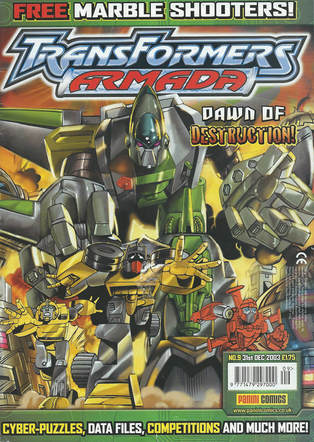 Issue 9: Dawn of Destruction!/Tales of the Mini-Cons... Counter-Strike!


Bit of a blip in the old world-conquest plans, eh boss?


Previously when we’ve come to the last issue in a series, the reasons for cancellation have been obvious: Dwindling sales and the decline of the accompanying toy-line.

With Panini Armada the end of the series seems more oblique. Panini themselves don’t seem to have been expecting it, from conventions at the time we know the next issue was entirely finished and a couple more were in various stages of development, with Simon Williams working to change the visual look of the series to be more Kirby than Dreamwave.

So either sales dropped off unexpectedly fast to the point that putting out an already done and paid for issue wasn’t worth it, or there was some other problem, possibly related to Panini’s licence. Did it expire and unexpectedly not get renewed? Apparently Titan did sit on the right for a couple of years because they knew the film was coming, did they sweep in this early? 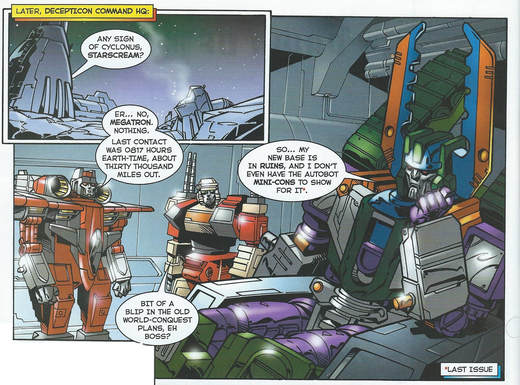 First day back at work after Christmas.
Either way, we finish the series on surprisingly rude health. Dawn of Destruction! is a straightforward compression of issues 12 and 13 of the American series, where Cyclonus merges with the duplicitous Destruction Team and goes on a power filled rampage. That didn’t really have enough plot for two issues, so the crushed down to 8 pages version is actually superior.

Here Cyclonus crashes after the events of the last issue, and is effectively body hijacked by the Mini-Cons power-linking with him and overriding his self-will. The real joy though is in the wreckage of the Decepticon moon base, where Megatron is incredibly depressed over recent events, not helped by Demolisher rubbing it in. This is both genuinely funny and reminiscent of Megatron’s similar, later sulk in Dark of the Moon. Plus there’s mention of Megatron’s punishment cube, proving him to be a kinky bugger.

The fight between Cyclonus and Megatron is fairly straightforward, though enlivened by Cyclonus begging for mercy as he’s winning against his will. It ends with Starscream pulling out a sonic de-power-linking weapon that’s incredibly handy, before the Destruction Team run away to their own moonbase (again, shades of the American series), where Starscream then calls them up for a deal.

What makes it though is the return of Stephen Baskerville on inks. His assistance makes a massive difference to Wildman’s pencils, giving the comic more strength and depth that anything we’ve seen since he joined in issue 2. Indeed, this may be Wildman’s best art of the modern era and makes an excellent way for him to bow out on Armada and helps elevate a fun but very slight plot. 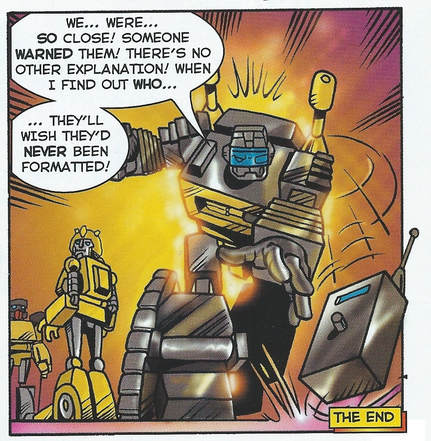 The final image of the series.
The final Tales of the Mini-Cons is presumably set before the Transformers came to Earth—everyone is based on Cybertron and all the Mini-Cons are living in their own communities—and is intended to show why the Destruction Team are so pissed in the present. However, there’s no caption to establish this, making the story slightly confusing in terms of continuity.

Despite this, the plot is again straightforward. Destruction Team leader Dualor has had enough of both the Autobots and Decepticons and intends to set a trap: Leak information to the Decepticons that there’s a whole load of Mini-Cons in the main Autobase and, as they attack to capture them, blow the whole building up.

Sparkplug though is unsure, in a nice bit of character he believes in Optimus Prime and decides to send a clandestine warning that lets the Autobots run, but which at the same time tips off the Decepticons as well. Which leaves Dualor swearing revenge on whoever betrays them.

The big thing here is again the art, the first professional interior work of Simon Williams, who will go on to be a major mainstay of Panini’s home-grown Marvel strips and various DVD covers. He’s a talented artist who makes the move from covers and posters easily with some strong dynamic art. It’s a shame IDW never snapped him up as he becomes even stronger from here, as anyone who follows him on Instagram will know. Which at least means that, with the revived Wildman/Baskerville team, the comic bows out on a visual high. 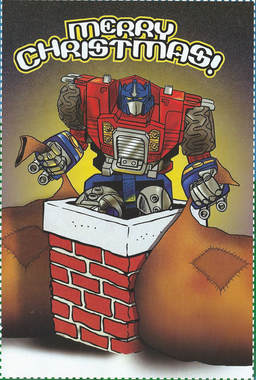 Must...resist...emptying...sack...joke...
One thing I wasn’t expecting was for this to be a Christmas special, and I believe the first one in six years I’ve actually covered in Christmas week. Which starts with High Wire wishing readers the best of the season in The Portal.

The free gift is some marble shooters, but with a page of cut out figures for you to aim them at and score points. The best way to keep the sprogs quiet on Christmas morning.

Cyber Space has run out of websites to recommend, but can continue to assure you Armada is on Sky One and promotes the Tidal Wave toy. It also talks about Unicron, declaring it the biggest Transformers toy ever (it wasn’t) and promises the forthcoming Unicron Battles will become the exciting focus of the comic in the new year.

Data File 17 and 18 looks at Jetfire and Commetor; Dawn of Destruction! gives various quizzes based on the lead strip; Cyclonus Upgrade! is a poster of the Decepticon under attack; Megatron’s Grotto sees a Santa dressed Decepticon leader offer you the chance to win toys not out in the UK yet: Powerlinx Red Alert, the Adventure Team, Megatron and Predacon; Festive Fun Factory! has High Wire offer suggestions for Christmas, including putting Megatron on the tree, cutting out Christmas gift tags and making your own card out of a picture of Optimus coming out of a chimney with a massive sack and the colouring contest is the art from Jetfire’s profile of his combined mode with Optimus. 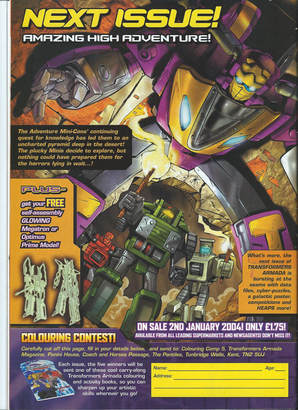 The next issue that never was...
Starscream’s Hate Mail! sees him promise to be nice for Christmas... though it’s really hard when humans are like the “doggie muck” on your shoe. Still, he is generally nice about the art this month, though he does wonder who Unicron is.

And that was Armada. After an infamously shaky start it became quite a fun little series, even though Wildman should never have been let near it (or Baskerville should have been brought on earlier). From the next issue page we know #10 would have involved the Adventure Team exploring a pyramid and possibly finding Sideways (though as the totally absent from the issue Thrust is one this cover, that’s not a guarantee).

But instead, the franchise would go back into hibernation for a couple of years, before something extraordinary happened.

But before that, we’ve two Annuals to talk about... 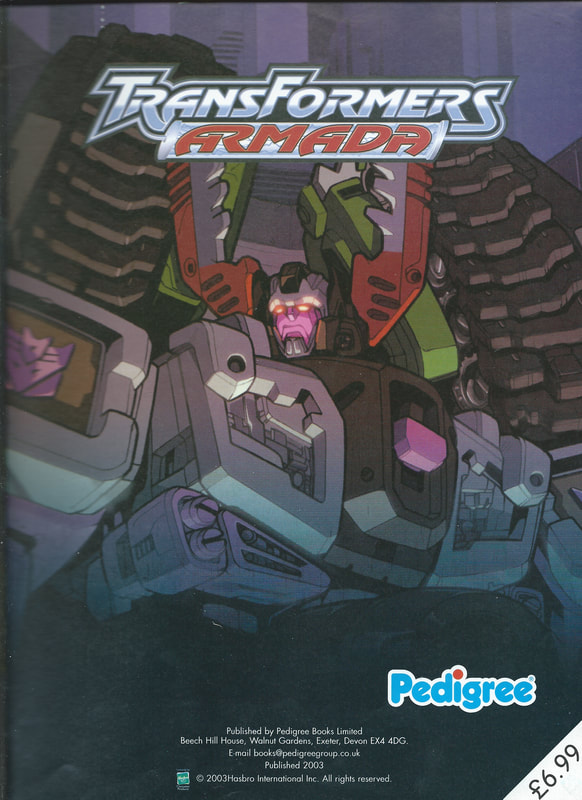