Throw Your Arms Around the World at Christmastime. 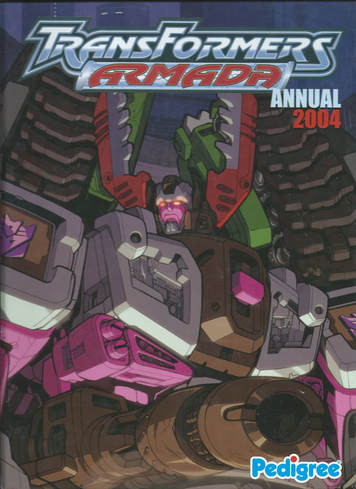 
*Published in time for Christmas 2003, this is, amazingly, the first annual to use the traditional British format of having the following year’s date on the cover. This will be standard from now on.


Cyclonus, Demolisher, Starscream... the time has come to take from Cyber City what’s rightfully ours. All of it.


With the attempt to give Armada a push in the UK, coupled with the fact that unlike Robots in Disguise there was enough stock comic material to produce one without putting much money into it, a return of the traditional annual for the first time in a decade was inevitable. Perhaps surprisingly though, it’s not from Panini (who still had their hand in the game, most notably putting out the first and best received of the revived Doctor Who books two years later), but Pedigree, who’ll be behind all the remaining books we’ll be discussing.

The decision they took for their first two years was a simple one: Straightforward reprints of Dreamwave material, which would of course be new to the target audience. For the Armada book this extends to three issues—though the first is missing the opening page and its gag of Hot Shot running over the greeting robot at Cyber City that then gets a call-back later when Megatron destroys it again almost as soon as it’s repaired—given new titles and a rather insulting to the art addition of arrows to several pages telling you which order to read the panels in. Though in an even more insulting to the art mistake at one point this gets the reading order wrong.

One problem though is that Armada does not lend itself to a good three issue chunk in isolation. Personally I’d have gone for the free comic book day issue and one of the two parters, but instead we get the opening two issues from the initial five part story (which actually makes some sense as it covers the start of the war and the fleeing of the Mini-Cons that Panini skipped over) and issue 6... which is the first of a two parter. Which does not really work at all. 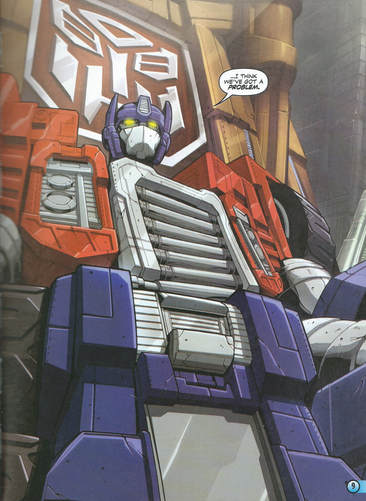 Still, our newly titled and slightly trimmed opening of Battle Stations is one of the strongest first issues in the modern Transformers era. It’s most notable for having a very careful pace—as noted back when I started all this, these first two issues cover the same ground in 44 pages that Marvel did in 10—that actually feels considered for once rather than slow. Most notably half a page being given over to Rollbar freeing a SPACE butterfly from beneath a rock that should kill the build up to an action scene, but is instead weird and charming.

We open with Hot Shot rushing into Cyber City (there’s something adorably on the nose about the name) to hand Optimus Prime a futuristic massive CD rom about mysterious and inexplicable Decepticon attacks on Mini-Con villages.

It’s worth noting there is literally no attempt to give Megatron a motivation here, not even a “Wants to turn Cybertron into a war world” level idea. He’s just being naught for the sake of naughty.

The bulk of the story is given over to Mini-Con village C52 as it prepares for the approaching Decepticon attack. They’re heard rumours about how the ‘Cons are altering them for power ups and are scared as Rollbar tries to get everyone to work together to put up a forcefield as defence. There’s a real and very successful sense of approaching dread here, even with time for a joke of Sparkplug—sent to keep watch at the edge of the village—being flung violently back into town and helpfully declaring “They’re here”.

The forcefield initially seems to work, but the Decepticons quickly and easily break through, with James Raiz (who does good work throughout) showing the scale and threat of Cyclonus easily. And again, the panels of rounded up Mini-Cons (though Sparkplug cunningly escapes by being knocked out, again) being put in cages are uneasy and very reminiscent of far too many real life parallels. That gives the cliff-hanger of Megatron, holding a limp Leader-1 in his base, declaring war some actual bite. 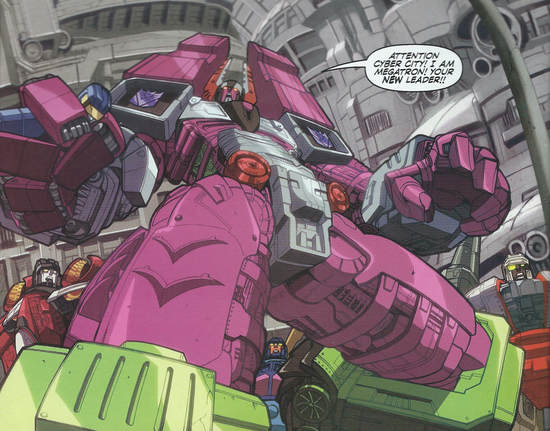 For your thighs only.
With the Mini-Cons and Decepticons having gotten the focus of the first story, Invasion! starts by giving the Autobots their moment. Chris Sarracini hit upon the smart idea of treating the Autobots as Cybertron’s Justice League style superhero team, with Prime as the sensible Superman. So as they investigate the attacked and empty village, we get to see him being sensible and wise over the eccentric group, with Hot Shot, Scavenger, Red Alert and Smokescreen all getting to show off some personality as they report on their findings.

The rest of the issue is then split into two plots. The first sees Megatron march into Cyber City and declare himself its new ruler (“Oh my goodness!” being one of the glorious responses) and using Mini-Con augmentation to easily beat off Optimus Prime. As with the British stories, there’s no use of energy weapons or toy gimmicks, it’s just everyone punching each other.

The second strand sees Sparkplug being found by the Air Defence Team, the only Transformers to have escaped from the Mini-Con concentration camp. As mentioned in the British stories, their personalities are great fun and their plan (to distract the automated defences at the Decepticon base by shooting Sparkplug at them in a rocket pack) delightfully nuts. Especially as it works and everyone escapes, leaving Megatron pissed and the Mini-Cons smug... until the engine on their ship explodes. 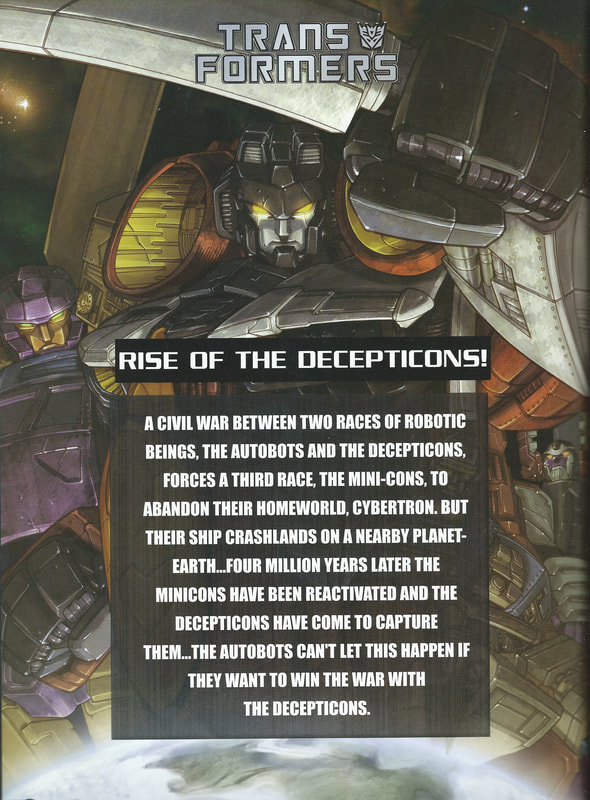 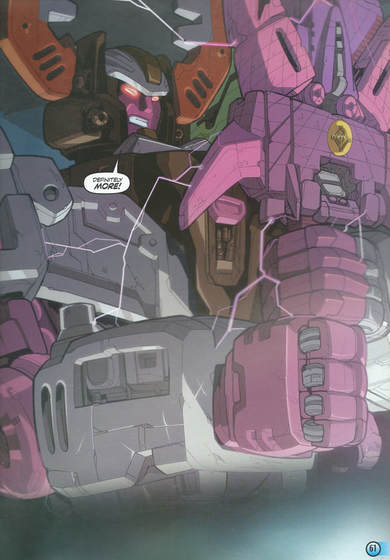 Oh, hey, I was wrong. The Star Sabre was a throbber in the US comic as well.
The third story, Rise of the Decepticons!, doesn’t just gain a title, but a page recap to cover everything that happened in issues 4 and 5 in the most minimal way that most notably uses the four million year gap the British series adopted rather than the mere one million of the American. With so much comic content this is effectively the only bonus material in this annual.

As noted in my overview of the series, Furman’s opening story is not his best. This first half sees Megatron wanting more power, so he grabs the Air Defence Team, brainwashes them and turns them into the Star Sabre (which he has to make himself rather than it being an innate power of theirs). Meanwhile we get an insufferable plot of Optimus sensibly telling Rad and The Other Two not to hang round a giant alien war, only for his advice to be resolutely ignored as the kids team up with the Mini-Cons to go rescue the Air Defence Team after Prime says that would be too dangerous.

Frankly the space wasted on Rad being a dick on his skateboard, including nearly taking off Alexis’ head, would have been a better cut than the first page. And Pat Lee’s art is pretty much appalling on every level.

Still, with only half the story present, we actually end with Megatron winning, which is pretty unique for a very young aimed Annual.

It’s a petty the selection of issues couldn’t have flowed a little more coherently as this is actually a very nice book, packed with content and with the comics themselves looking very nice in the oversized format. Considering the minimal overheads, it’s easy to see why it as enough of a success to repeat the following year. 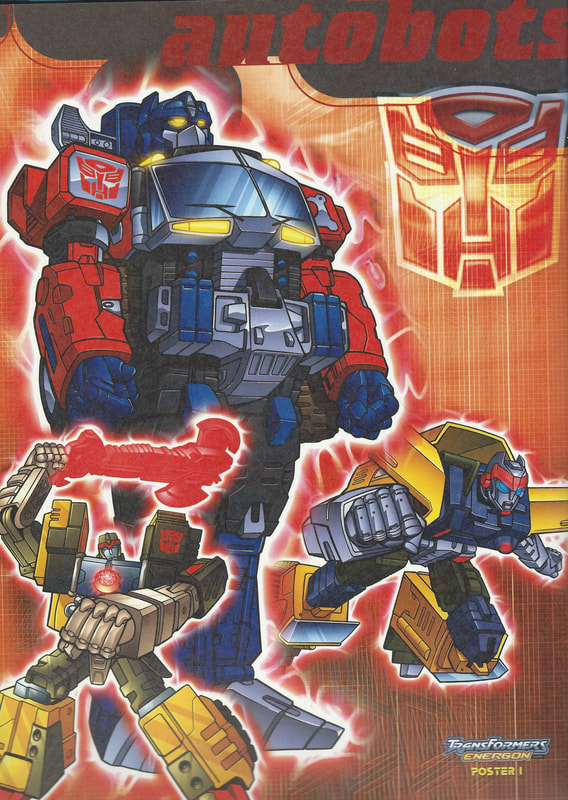