Moon River, Wider Than a Mile. 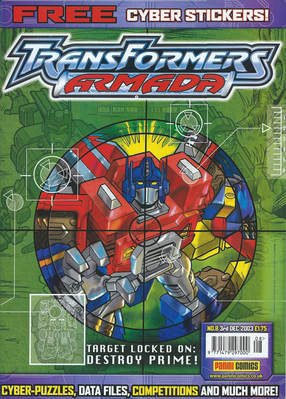 
The big exciting news this week is we’ve finally got some idea of what the IDW reboot is going to be like, the announcement of which can be read HERE. Unfortunately there’s no real big exciting thing to get ramped up about yet (and for some reason they don’t mention writer Brian Ruckley has written comics for them before with Highlander, making him less of a left-field choice), but hopefully that (and some female creative talent) is to come.

Back in 2003, we’re now coming up till the end, in more ways than one as issue 8 also features the last major contribution to the franchise by a very familiar name.

It also, as happened with the later issues of the American Generation 2 comic, is only divided into two stories in an arbitrary sense to allow for the two artists, what we really have here is one fourteen page story. 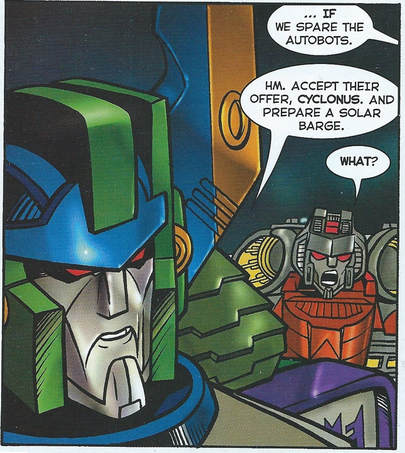 Some chin.
The first, Earthshaker!, opens back on the moon with a gag of Megatron being shown around the massive new Decepticon base by Starscream like a perspective new home buyer and getting very excited by the torture chamber and central heating (“I’ll take it!”). And that’s before he hears about the missile silo that will soon launch its deadly contents at Autobase Earth.

This is where Furman introduces another idea from the American strip (though one that’s only made clear in The Portal), Smokescreen and Scavenger being on a deep cover spying mission on the Decepticon base to keep an eye on their new weapon. This is perhaps an odd thing to carry over as Furman only introduced that strand originally to cover a plot hole where he’d forgotten those characters were part of the Earth team when he’d taken over the book and therefore isn’t especially needed here. Though it’s lucky for Optimus as they’re able to tell him what’s coming.

Thanks to CONTINUITY, the Autobot space bridge is still broken from issue 4, but thanks to a lack of CONTINUITY Prime doesn’t just call Jetfire and tell him to send troops from Cybertron as he did in the last moon story. Instead Sparkplug simply suggests a delaying tactic of surrendering the Mini-Cons in exchange for the sparing of the Autobots. Which, of course, Megatron agrees to and then orders the missiles fired anyway. 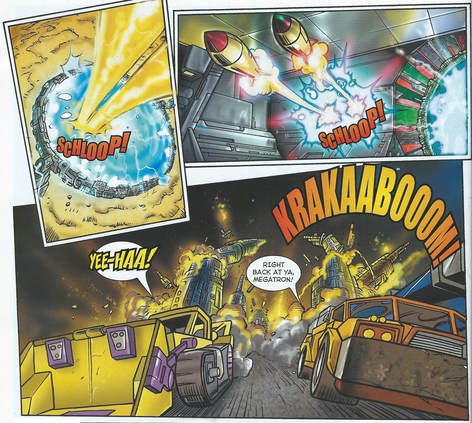 I hope Megatron hadn't paid his deposit.
This is where things get a little odd, as instead of just using his own space bridge to scoop up the Mini-Cons, Megatron sends a solar barge pulled by Cyclonus. And it’s not as if his own space bridge is broken, as Prime’s plan depends on Smokescreen and Scavenger breaking into the building at the new base with it in (security is clearly not the same priority as central heating).

The delay has allowed the Autobots to build a makeshift space bridge on the roof of their headquarters, and when the missiles come in they just fly through and—thanks to the two spies—out the other end into the Decepticon base, destroying it. Which arguably makes the time spent introducing it a waste, but it’s still a funny moment.

What is strange though is the implication that a space bridge only works with a terminal at each end (as there’d be no need for the Decepticon one otherwise, you’d just aim the Autobot machine at the moon), which contradicts how it’s worked in previous issues where people beam in and out all over the place. Indeed, it contradicts the early part of this issue as if that were the case, Prime would have no way to send troops to the moon even if his was working.

Still, transporters are such an obvious offensive weapon that never really gets used in SF, so it’s nice and fresh to see that angle explored and there is some good humour throughout. Though it does leave us with Cyclonus towing a solar barge full of Mini-Cons to the moon, bringing us to our second story. 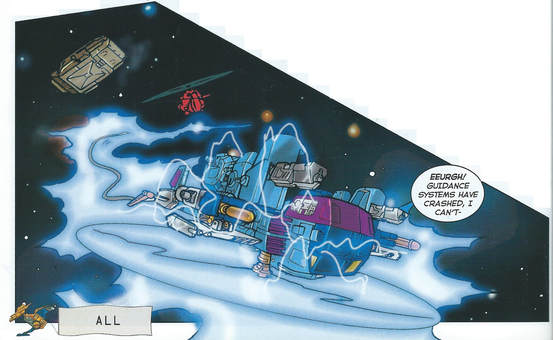 He's in a spin.
Lost in Space! (see if you can spot the reference to a classic 60’s TV show there) has a very straightforward plot. The Mini-Cons get out of their cells in the solar barge (it’s no Solar Pool is it?), cut the rope tying it to Cyclonus and, after a brief battle, float back down to Earth. The main plus points in the story being some nice characterisation, such as Longarm ignoring any fancy gimmicks and just punching his way out of his cage in frustration.

The attempts at “Real” science are also a little off, Sparkplug and High Wire (and to my shame I’ve been parsing that as one word for eight weeks) make a thing of switching to internal radios when they go outside the barge, but are already in space and speaking verbally when they make that choice, and helicopters again work in space. Indeed, we’re told the strange fact that Transformer helicopters have some sort of psychic link that means Jolt can’t sneak up on Cyclonus in vehicle mode.

The big selling point though is Lee Sullivan’s art. I believe, the odd cover for a Titan trade and MR JOHNSON aside, this is his last Transformers work (this is as good a time as ever to mention the pack-in that came with the UK release of the Armada PS2 game that was written by Furman and drawn by Sullivan earlier that year. Or at least that was supposed to be packed in with it, initial copies were missing it. Sadly I couldn’t find a scan to cover it here) and he is having an absolute blast.

The zero g setting lets him do interesting angles, characters upside down and sideways and produces some of the most innovative art we’ve seen on a UK story since Marvel UK stopped doing original material. It’s very much on a different level to anything we’ve seen so far and if, as he admits, Sullivan had a struggle adapting to drawing the “Dreamwave” way, you’d never have told from the final results and the setting this month has clearly inspired him even more. It’s a shame having a proper comic career stopped him from working on the Titan book, especially the Prime issues as I think that show would have fitted his style nicely. 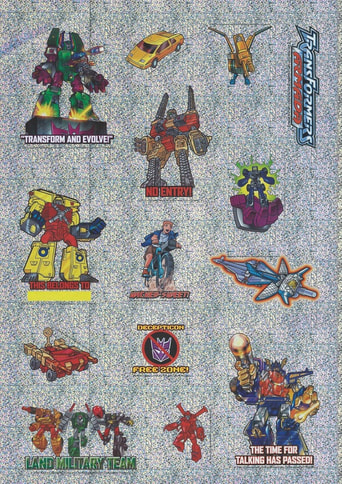 Evolve!
The free gift this month is a bunch of shiny silver stickers, the first gift I still have. Who can forget Megatron’s famous catchphrase “Transform and evolve”? Or the iconic Optimus Prime line “The time for talking has passed!”

The Portal not only gives us key information on the Scavenger and Smokescreen story, it also shows High Wire (two words) as being absolutely terrified of being bombed to death from the moon.

Cyber-Space! is evenly split between gushing praise for the Overlord toy that can combine with both Optimus and Jetfire, and some old school Marvel goodness with promo for Titan’s City of Fear trade, using a placeholder cover. In brand synergy this is opposite a competition for the Cybertron Redux book, where you have to link the right autobiography to the right Transformer (How to Take Over the World to Megatron for example).

The website of the month, again suggesting a certain bias, is Panini’s own site. Why not stop by the message boards and have your say in the popular Transformers chat section?

Laserbeak: The Eye in the Sky! profiles the camera-bot and offers a competition to win him by finding the six words he’s towing behind him throughout the issue (PROTECT THE MINI-CONS AT ALL COSTS); Data-File 15 and 16 looks at Red Alert and Longarm; Hunt the Mini-Cons! is two pages of puzzles to track down where some new recruits may be hidden and asks you to spot the clues the red eyed Decepticon badge wearing Optimus might be an imposter; Earthshaker! is a poster of Red Alert, Prime and Hot Shot running from Megatron’s missiles; Win Jetfire! by unscrambling the anagram to find the name of a Mini-Con (Crumplezone); Mini-Con Breakout! rather cheekily implies the second story was a bit underwhelming and gives you games to help the Mini-Cons escape in a more interesting way and the colouring contest is the cover art to issue 3. 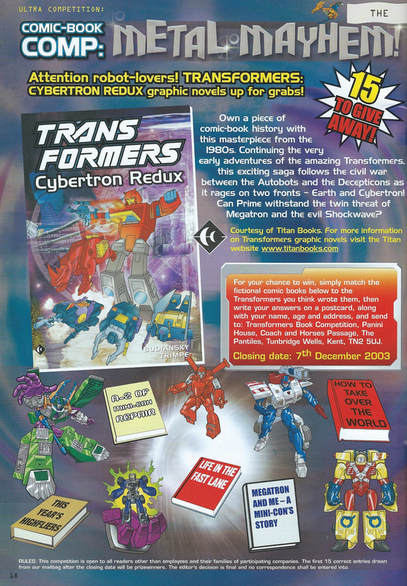 Christmas reading.
Starscream’s Hate Mail! initially looks as if it’s going to adopt a more jolly attitude after opening with a gag of the Decepticon being scared of Edward Litherland-Smith posing with his toys looking like a giant human.

But it quickly returns to business as usual as Peter Ashworth from Newport offers some pop psychology his mother has passed about Starscream being miserable because he really wants to be an Autobot. That’s Armada Starscream, who ended the cartoon pretty much an Autobot. So naturally Starscream’s reply includes “The reason I’m so mad all the time is because I have to read pathetic drivel like this from snivelling human simpletons like YOU!”

Next week, it’s the end of both 2018 and the Armada comic as I look at the final issue and the two British Dreamwave Annuals. In the meantime, why not stop by the message boards and have your say in the popular Transformers chat section? 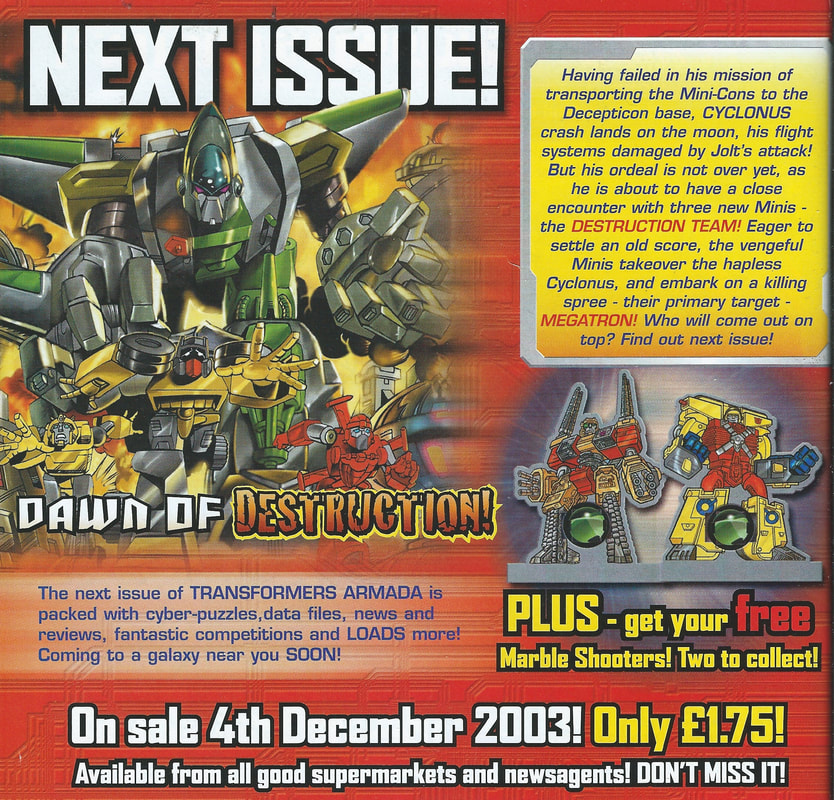 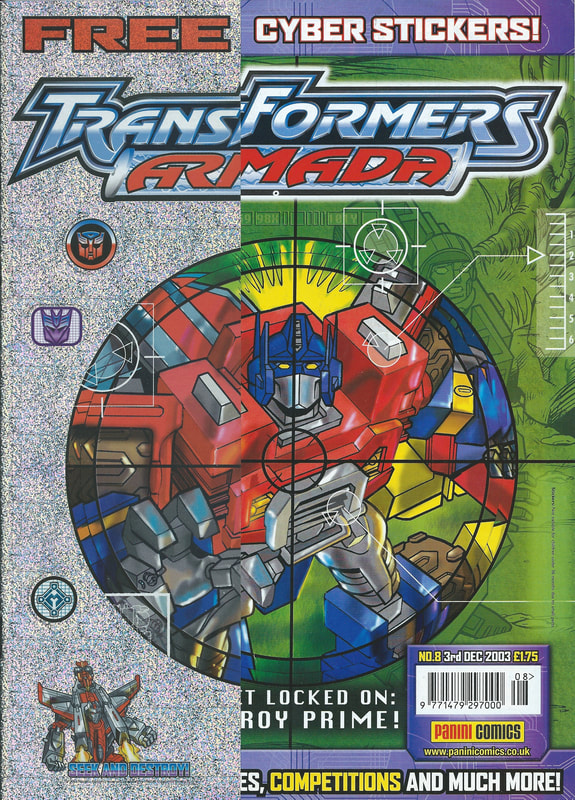