Well There is a Reward, to Live and Die by the Sword. 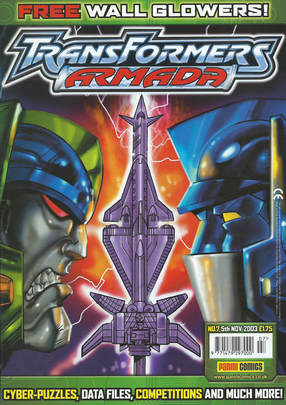 
They are in fact, quite literally out of this world!


In a week where I struggled not to laugh at the “Purple headed mountain” lyric in a hymn during a funeral, it almost seems like a deliberate challenge that issue seven’s main strip is all about the characters pawing over a big, purple, thrusting sword. Especially as I don’t believe the Star Sabre is purple in any other iteration of the franchise. Clearly this is entrapment!

So instead I’ll talk about the far more sexier fact that the comic is back to 14 pages this month, though the divide is now 8 for the lead strip and six for backup. Which makes me wonder if last week’s extra page was simply down to a miscommunication over how the story was going to be split up from now on. 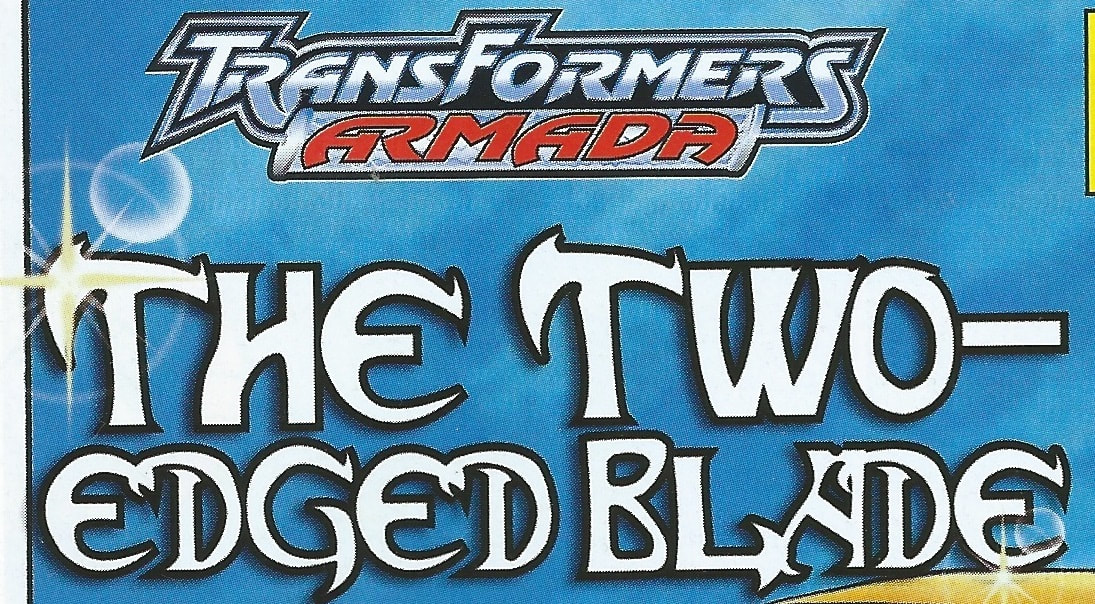 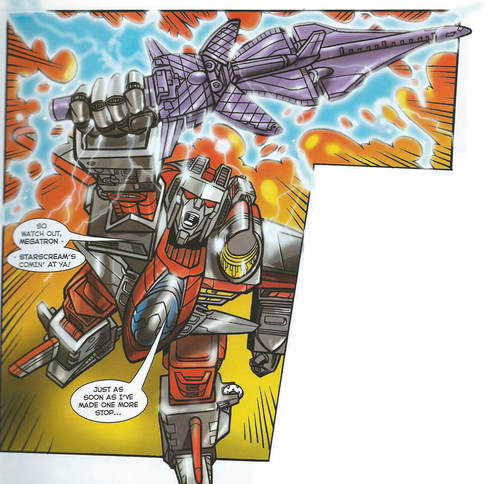 It's entrapment, really.
Despite the luxurious 8 pages, the lead strip (which very loosely takes its starting point from Furman’s first two parter in the American story), is probably more notable for its attempts to build up the continuity of the series than the actual plot.

So following up from the end of issue 5, Starscream has followed up on the tracer he placed on the Air Defence Team and knocked them out with one blast before using a McGuffin to place them under his mental control so they can form the fearsome star sabre!

Which leaves us with him waving his purple weapon about and shouting “Watch out Megatron...Starscream’s comin’ at ya!”.

He thinks he needs more power though and decides to pounce on the three humans so he can get the Street Action Team as well. Which is where our second piece of Mini-Con combiner promotion comes in as they form Perceptor to fight Starscream. Which amusingly means none of the times the children have been in danger prior to this warranted this measure in their eyes. 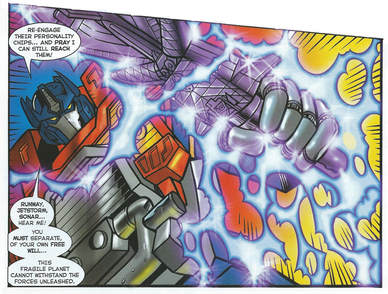 Prime knows how to handle his weapon,
Starscream looks to be winning, even against the tiny lanky formidable might of Perceptor, before things take a turn for the wet as a massive storm breaks out, with Optimus Prime walking out of the middle of it to say the power of the Star Sabre is too much for the Earth to handle, “This fragile planet cannot withstand the forces unleashed!”, well, we’ve all used that boast.

Unfortunately this is where the page count suffers as rain and thunder is the only affect of the Star Sabre we get to see, with no real indication of what its powers could actually do if properly unleashed.

Still, Prime connects with the Air Defence Team and convinces them to separate, and though its unclear here the next story shows they decided to give up their isolationist stance and stay with the Autobots. But we actually get a proper cliff-hanger as, with Highwire saying the less people who know about them the better, Amos Hume from last issues backup strip drives up.

This has been the slightest story for a while, feeling more like a backwards step from the progress of the last few stories. 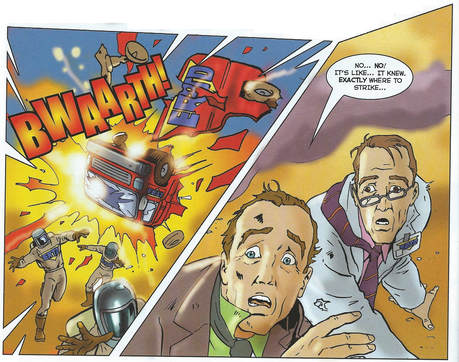 No one could have predicted this.
This issues Tales of the Mini-Cons... (where Furman shows his age by naming it after the quiz of the week) picks up on this cliff-hanger and adds a bit more meat to the bone, albeit right at the end.

In the four decades since we last saw then, the US government has decided to shut down the Extra-Terrestrial Response Division at the exact moment lots of extra terrestrials are running about. Possibly because, for a secret group, they’ve spent a lot of money on branded vehicles and uniforms.

This has annoyed head of the project Quint, so he he’s decided to sell the Land Military Team to the highest third party bidder.

This is actually a fun variation on the Men in Black tropes, similar to what The X-Files did with Morris Fletcher in its last season. And the demonstration is a nice action scene, well realised by Lee Sullivan.

But, in typical Furman fashion, the second Quint points out the robots are completely under his control, they break free and go on a rampage. For the second issue in a row.

Luckily the Autobots turn up and calm them down, with a nice and unexpectedly thoughtful moment for Wreckage as he recognises Hume and realises he kept the message for forty years, meaning not all humans are as bad as his experience has taught. The ending is also slightly darker than usual as (in a nod to The Icarus Theory) Quint is left to the incoming human authorities, with the implication it won’t go well for him.

Despite the reuse of ideas from just the last issue, this romps along nicely and ends well, in particular helping the issue as a whole tie up all the ongoing plots to date, making this rather the end of the first phase for the book. 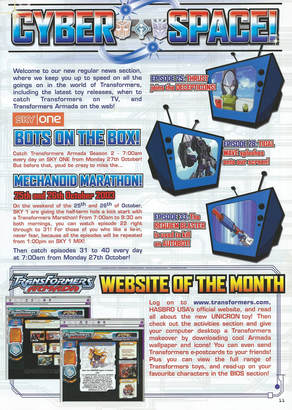 Distinct website bias there.
The free gift this month is the appropriate for Halloween spooky wall glowers.

The Portal is very keen to emphasise the power of the Star Sabre, and is now calling the lead strip Armada Chronicles.

A brand new feature débuts this month, Cyber Space!, looking at Armada in other media, telling young readers which episodes are on Sky this month, including a big block of episodes 22-31 on the start of the half term holiday weekend, 25th and 26th of October. The website of the month is the official Armada website, which seems to be the result of some bias. But at least you can go read about the new Unicron toy and send your friends e-postcards.

Data File 13 and 14 covers Cyclonus (who has the worst power up name of “Shin attack”) and Crumplezone; Red Alert’s Clinic! has him give you a psychological test to see if you’re an Autobot or Decepticon (option D for the “What to do with the Mini-Cons?” question being “The world is closing in. This is surely the end. The end” in small print); Star Sabre: The Ultimate Weapon! is another (based on the signature) Simon Williams piece showing off the purple sword; Meet: The Land Military Team! establishes their distrust of humans that plays a part in the second strip; Win Smokescreen! by telling how many Mini-Cons are attached to Megatron in a photo; Robo Dreams! uses art from issue four of the Decepticon Mini-Cons snoozing to put thought bubbles of their heads that, when you spell out the first letter of each object in the bubble, will spell out what they dream about (a monkey, an egg, a gun, an ant, a toaster, a rock, an oven and—unbelievably dark for a kids comic—a noose) that can win you a bedspread; the colouring contest is of a slightly hard to make out in black and white Cyclonus and Mini-Cons. 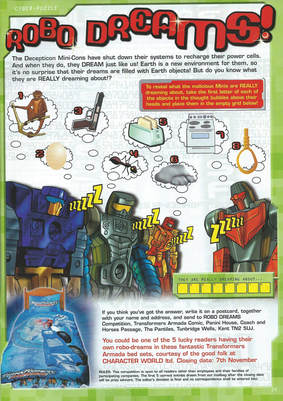 A funny family game about suicide.
Starscream’s Hate Mail! has new art of him shaking a child by the leg and the promise he knows where all readers who write in live, so watch out. His charming nature this time includes telling Robert Livingston of Glasgow he’s traced his drawing of Damolisher and promising to crush Richard Atley of Northern Ireland like a flea before spreading the jammy remains on toast and eating it.

Which makes you wonder what a cooking feature in the magazine would be like.

Next week, back to the moon! 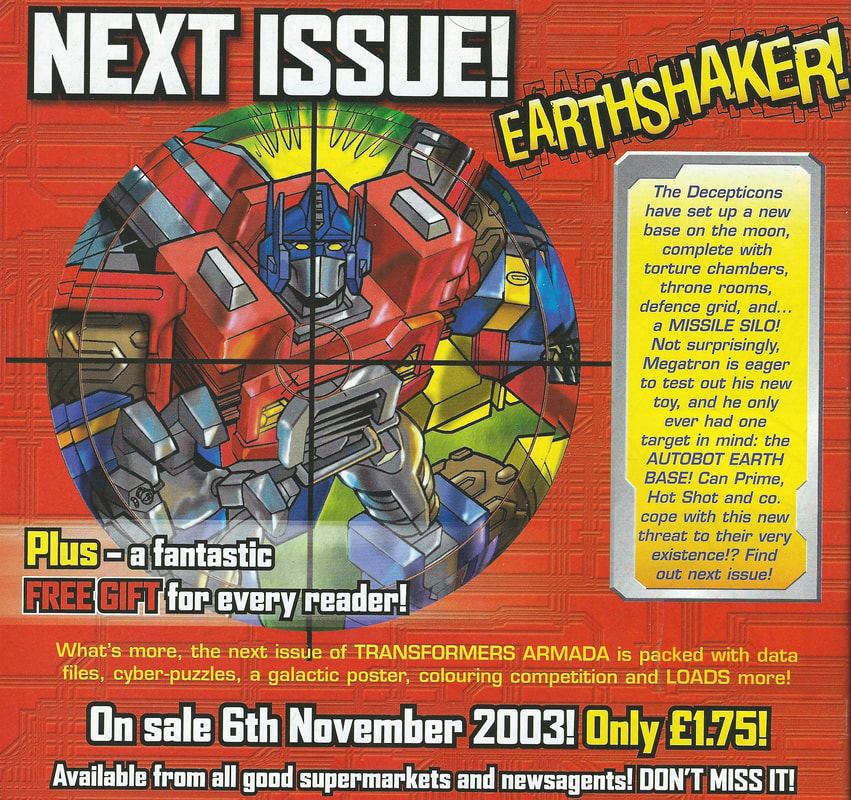