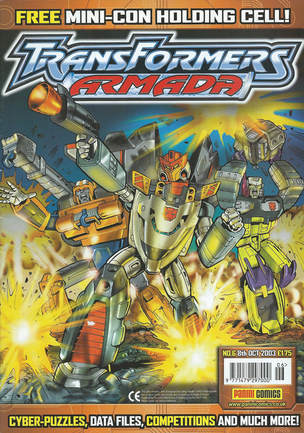 
The sixth issue of the series features what are probably the two best remembered things about this comic. The first, as promised by the front, is the most amazing free gift of any comic: A Mini-Con holding cell. Or rather a cheerfully pink box that looks suspiciously like it has been repurposed from a Barbie comic and is quite brilliant.

I’ll talk about the second further down, but there’s actually a third and completely overlooked surprise here. This is the sixth of nine issues, it has always been assumed the comic was never that much of a success and was very much on the downward turn here. However, there has been an extra page of comic added, bringing the length of the lead story to 8 pages and the overall amount to 15. The fact the comic was doing well enough in at least its early issues for a modest budget increase (the extra page seems to be at the expense of an advert as well) rather flies in the face of received wisdom.

It is possible Hasbro upped their contribution a bit as the lead strip does some new toy promotion again, but considering the cancellation I’ll be discussing in a few weeks seems to have been a genuine surprise, I’d say it’s more likely we actually have a comic that burnt brightly but briefly. 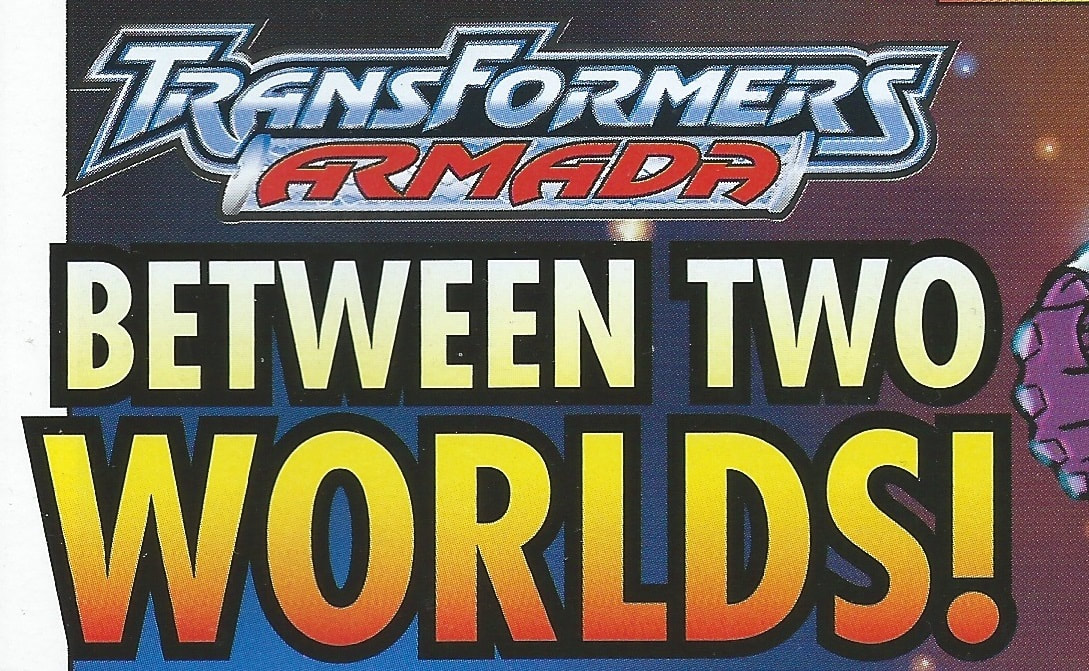 Helicopters can fly in space.
Despite the extra space, lead story Between Two Worlds! has an unenviable task of trying to compress the four issue Mini-Cons on the moon arc from the American comic (speaking of which, the four million year length of the war is here retconned to be the same as the one million in the US series) into those eight pages.

We start with what should be a fun joke as, eight years before Dark of the Moon, Megatron visits the sight of the moon landing and crushes the flag underfoot whilst quoting Armstrong. However, it’s undone by the odd choice to have a made up red and yellow flag rather than the Stars and Stripes. I’m not sure why this would be the case, did Wildman or the colourist have no concept of what the flag looked like? Furman wanted something generic? Or some odd editorial edict? This issue was published on the second anniversary of 9/11, so it's entirely possible someone thought it would be in bad taste to have Megatron stomping the American symbol and it was changed late in the day. Whatever the reason, it kills the gag.

As Megs, Damolisher and Cyclonus (who can fly in a vacuum despite being a helicopter. Unlike the American comic, there’s also sound in space) hunt for Mini-Cons on the moon, the plot device of the Earth Autobase Space Bridge being broken is a good excuse to introduce some new toys, as Optimus phones up Cybertron and asks Jetfire (who, because of the compression, is a happy loyal guy unlike the more terse character from the US) to send troops to stop the Decepticons, with Smokescreen and Scavenger being the bots picked.

Prime is the original prankster.
As they fight on the moon, Optimus launches a probe that will wake up any Mini-Cons there. Again, the complicated politics and large Mini-Con base of the American story are simplified to it waking up just two Mini-Cons, Liftor and the only seen on one panel at the very end Rollbar. Which is handy as the power-linked Decepticons are easily winning the battle, with Damolisher getting one great line of “Did that hurt? Here, let me rub it better with my tank tracks!”, so Liftor randomly turning up and going “I hear you could use an edge right about now. Me, I’m all edges!” is a handy way to wrap up the plot as he turns Smokescreen into a punching machine.

But there’s one, final glorious moment as Optimus projects a hologram to the moon just to gloat at Megatron about how he’s already had all the Mini-Cons beamed away and ha-ha, sucks to be you. Megatron can’t even do his holding hands thing as the hologram has no substance. It’s so sad.

Though it’s very stripped-down compared to the US story it uses elements from, this is great fun, fast and full of energy. 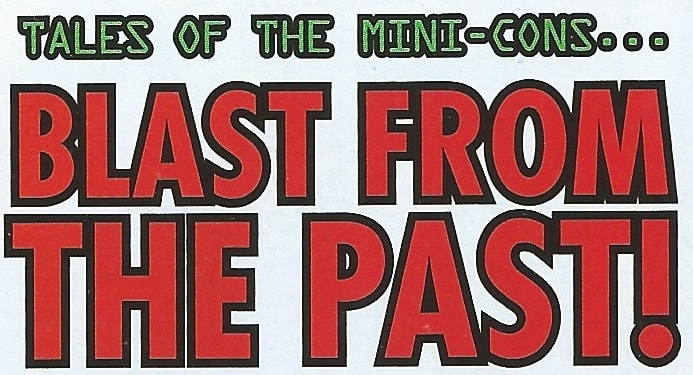 He ages into Furman...
Tales of the Mini-Cons picks up on the thread from last issue, as we see how the Land Military Team were captured by the government. Or rather its aftermath, as we join a training session for the Extra-Terrestrial Response Division’s new toys in Nevada, 1959. Though sadly Keiron Ward’s art never really suggests the period, if the caption had said “2003”, it would seem just as likely.

In the same way the last issue was our first sign of an obsession that would consume Furman’s IDW work, here we get a plot he would do repeatedly during his run there where spook Agent Red would think he had some Transformers under his control, only for them to break free and go on a rampage so he gets some more Transformers he thinks are under his control to send after the ones who escaped, who break free and go on a rampage and... repeat till the writer gets quickly pulled off the book. It’s the little old woman who swallowed a fly method of dealing with alien invaders.

So here the G men think the Land Military Team are drones under their control as they put them through their paces (though for some reason they act like the test is a failure, even though it seems to go fine, suggesting some art/scripting confusion), but later they escape and break free!

Because Furman doesn’t have the same luxury of space here though, things are much simpler and more direct. They barely make it to the next town of Stillwater before being recaptured. But before they do, they’ve had chance to be seen by and speak to a local vicar, Amos Hume (Furman’s obsession with terrible names for humans is actually cute here with the reference to the name for readers Dreadwind had in the old Marvel UK letters page) and a mere 44 years later knows he has to pass the message asking for help on when he sees the Air Defence Team on TV.

Though it’s perhaps a sign of how this is a more kid friendly book that Amos wasn’t “Disappeared” or threatened with violence to keep stum by the Feds.

This story fell rather flat compared to the opening, but again, the comic continues to be better than its reputation would suggest. 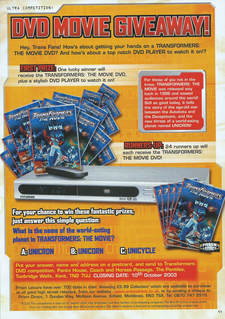 Not the version with the introduction by the child molester, thankfully...
Extras this month include: A competition to win the basics bare bones DVD of the 86 film, plus a player that would probably be more exciting to kids; Data File 11 and 12 cover Smokescreen (who has a “Strange looking” vehicle mode, bit harsh!) and Liftor; Rescue Mission! sees Rad in charge of the Autobot base again and having to decode messages to send the right help to Optimus Prime; which is where the Mini-Con Code Wheels that also let you send secret messages to your friends come in handy; the Moon Battle! poster adds Jetfire and Starscream to the action on Luna; WIN Optimus Prime Superbase! is a competition for “The most eagerly awaited toy of all time!” that requires you to find Laserbeak in the strip; and the colouring contest is of Prime and various Mini-Cons.

Of course, the big thing this issue is remembered for is the introduction of the new letters page host with Starscream’s Hate Mail!, well represented by art of him ripping up his post with a disgusted look.

The idea here is clearly to try and recapture the classic Soundwave/Grimlock days of Marvel UK with a sarcastic mildly antagonistic host. But whilst those characters would temper this with humour and a general sense of being tongue in cheek, Starscream (and lets not forget the Armada version is probably the nicest take on the character) is just a complete dick who pushes the insults too far. 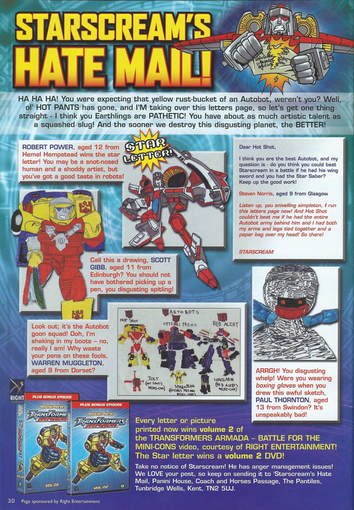 He really does hate you.
Responses in just this first issue include “You may be a snot-nosed human and a shoddy artist...” (about the star letter! Which now wins volume 2 of the VHS/DVD of the series); “Why waste your pens on these fools” and, most brutally “Were you wearing boxing gloves when you drew this awful sketch”. It just doesn’t work and, assuming we are now only getting real kids art and letters, must have upset a lot of little people.


Though it’s easy for me to find funny as I’m a terrible person.


With an issue so where the lead strip is so heavily influenced by the US comic, it’s a good time to take a look at what Dreamwave did as well. Click below to fly across the Atlantic. 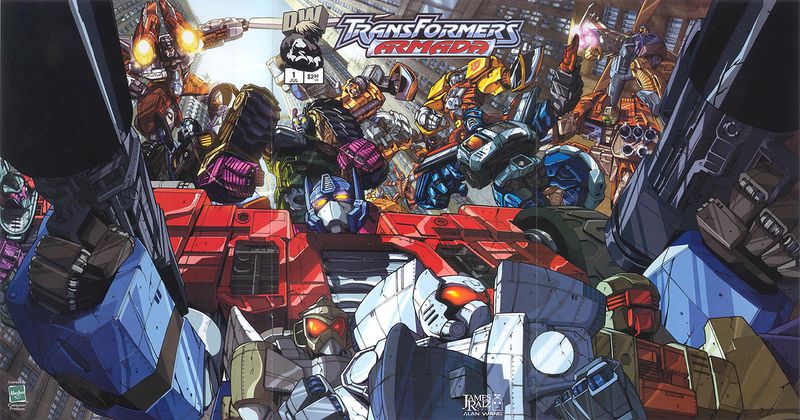 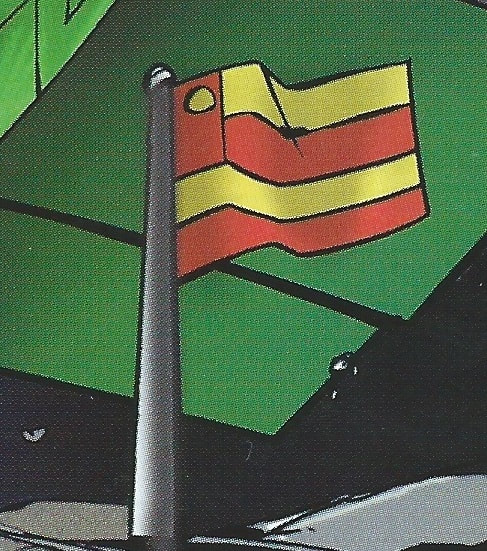