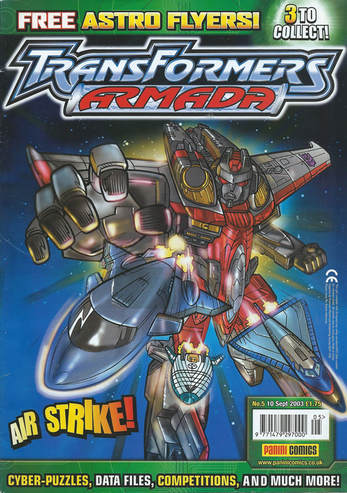 
Another day, another daredevil rescue!


This issue is something of a novelty, continuing the trend of Furman representing old ideas for a younger audience, but also signposting the direction a lot of his future writing will take. That makes it something we’ve not really had from the British comics since Marvel UK stopped doing original material, an issue that’s forward looking rather than regressive.

Which of our stories is pointing to the future and which is more interesting in recycling is clear from the title of our opening, Devices and Desires!, previously used on the US (and UK reprint) Generation 2 comic. Not to mention that the cover tag-line of “Air Strike!” is a nod to a previous team of small planes.

This is also our first introduction to new characters, in this case the Air Defence Mini-Con team, a major part of the line as they combine to form the Star Sabre, a sword of amazing power that both sides fought over across the cartoon and American comic.

That’s not apparent here though, but Furman does have fun with them, using their Chris Sarracini developed personalities of Runway of the chatty one and Sonar and Jetstorm as his comedy one word answer stooges (though the names of which toy has which personality has gotten mixed up along the way). He also uses wholesale dialogue from his own issue 6 of that series. 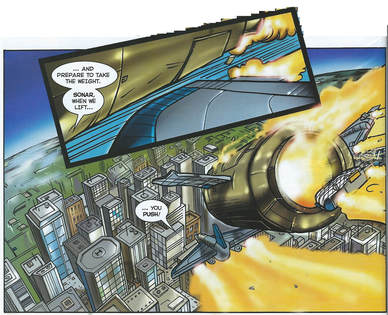 Air Defence Team Are Go.
The plot benefits from having a lot of the action with the characters in vehicle modes in two ways. The first is it hides a lot of the deficiencies in Wildman’s art, and the opening action scene of the Air Defence team stopping a falling satellite from destroying Illinois in the best Thunderbirds style is by far the best realised sequence of the comic to date, bright and fun.

Then, when this turns out to be a trap set by Starscream to lure them out so he can either capture them for Megatron or keep them for himself (guess which he leans more towards), we get the other advantage that comes from there clearly being not anywhere like the restrictions on violence towards vehicles as there is towards robots, as Starscream slaps the various jets and spaceships about like he’s auditioning for a role as the lead villain in a J.K. Rowling film and gives the attempts to present this as a serious action comic a bit more strength that we’ve had to date. 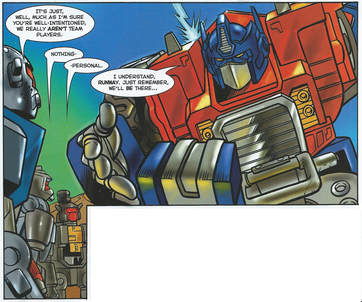 Give him a big hand.
It’s also the first story that feels like it could have been longer, as the plot shuts down with Optimus Prime, Red Alert and Hot Shot (who all continue the odd Wildman trend of having parts of their body flash random lens flare) appear and scare Starscream off before the Mini-Cons decide they’re better off on their own than with the Autobots. Though they don’t know (and its mildly confusing to the reader as a speech bubble from Starscream emphasising this instead looks to be coming from a Mini-Cons armpit) that the Decepticon has placed a tracking device on them...

Though the absence of Megatron means the death off the running holding hands gag, I really enjoyed this one, again there’s no depth, but for once it feels like everything is pulling in the right direction and it has some nice characterisation for the four main featured characters and a fun space rescue. As a story for younger fans, it’s hard to fault. 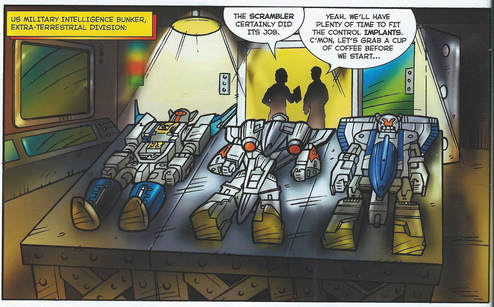 Things are getting strange...
Our Tales of the Mini-Cons isn’t as good, but is more interesting. It’s a very simple plot: The Air Defence Team try to break into a NASA research facility for parts, but find they’re expected and are overcome and captured by a mysterious black ops team that clearly has prior-Mini-Con experience.

Over in Area 54 (groan), the Extra Terrestrial Division are pleased with their latest capture, but haven’t realised that the team managed to shut themselves down in advance of the Tasers used on them taking effect and are able to get up. Hacking the computer they find out that the Land Military Team have also been captured and, escaping, make rescue their priority.

Furman had toyed with it a bit in the Marvel years, most notably with his darker take on RAAT in In the National Interest, but this is the first time his interest in government conspiracies and men in black really comes to the fore, something that will become a consuming passion of his IDW work, to the point even they got confused which nefarious group were which in their infamously poor guide to the story so far they did around the time Mike Costa came aboard as writer.

The issue of course, is that this is 2003. The X-Files had already stumbled to an end the year before and the entire conspiracy bandwagon it inspired was very old hat by this point. Tellingly, just three years later the first Bay film will play the idea for laughs, it’s not something you can easily do seriously any more. What might have been riding the wave of a popular trend if he’d done it during G2 is now tired and passé. And though it’s fairly mild here, it’s going to be a millstone for a lot of his future work.

As a story itself, it’s fairly basic. And because it’s supposed to be more serious than issue three’s backup was meant to be, Keiron Ward struggles more on the art. However, it’s harmless enough and the issue overall still winds up a winner. 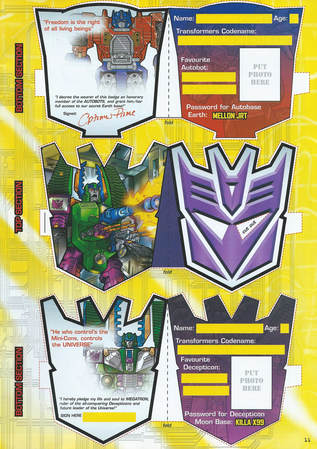 What neat handwriting Optimus has.
The free gifts this month are one of three “Astro Flyers”, or gliders to you and me.

There’s been a small redesign to The Portal (and also how the Armada logo is presented on the lead strip), and Highwire again presents an in-fiction set up for the story as he talks about how dangerous the Air Defence Team could be.

The most exciting extra this month is cut out I.D. badges, where you can be either an Autobot or Decepticon, with Prime even having sighed the Autobot version. It’s also worth noting his motto is now “Freedom is the right of all living beings”, because he doesn’t care if you’re sentient or not. There’s also the chance to pick your Transformers codename by rolling a dice and picking the options from the numbers offered. Mine came up as Galacto Magnus.

Other features include: Data File 9 and 10 on Stascream (the author is seriously in love with him, “One dangerous dude!”) and Swindle; Brain Drain tests your Transformers general knowledge (amusingly one put the right quote to the right character quiz has Megatron talking like a medic, 13 years before James Roberts made him one); poster Terror in the Sky! depicts the Air Defence Team fleeing from Starscream over a city (and adds to the Thunderbirds feeling by combining two episode titles, Terror in New York City and Trapped in the Sky); Meet the Air Defence Team! profiles them in a way that makes it look like they all hate each other and is the first place the secret of the Star Sabre is mentioned in the comic; Win Transformers: Armada Ultimate 3-D Combat Flies! will get you a complete set of the poster and 3-D specs books if you can answer what the D in “3-D” stands for; the colouring page is now no longer a spread, but is a competition with prizes of a Crayola PRO sketching set.
Hot Shot’s Hot Mail sees the Autobot sign off as he has to go back to his home planet, but he’s sure another Autobot will take over. He also promises to stay friends forever with all the readers.

He did not stay friends forever with all the readers.

Next week, the Decepticons want the moon on a stick and I look at the American comic.

In memory of Tilly Griffiths. 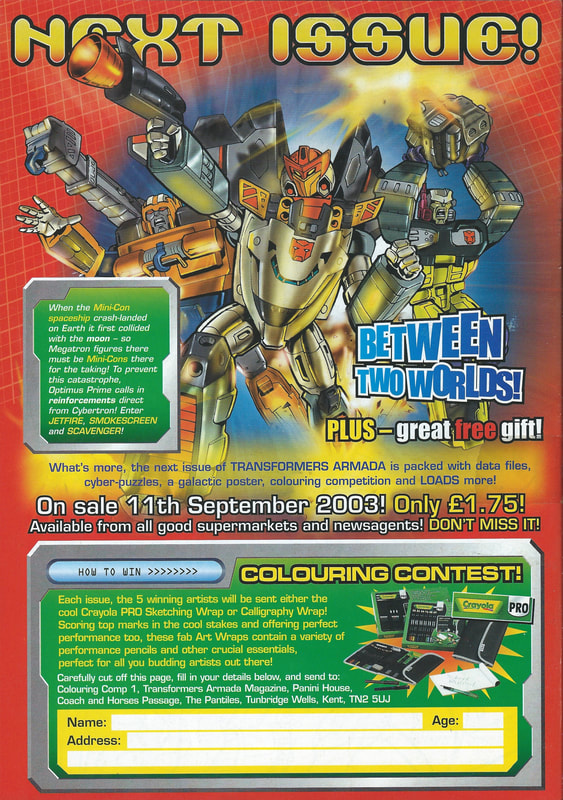