Adventure Is His Reward. 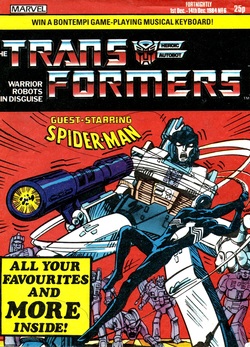 I've always suspected that Optimus Prime had a perverse sense of humour.


After all the set up last issue, we finally get to the main event. The epic crossover that sees the greatest Marvel comic hero of them all team up with the single greatest Autobot, the mighty, indomitable... Gears?!

Yes Gears. If you're not a dedicated fan (as unlikely as that might be if you're reading this in the first place) the chances are you can't place him. He's the little grumpy mini-bot. No, not Huffer, the other grumpy mini-bot. The guy who only got a feature episode in the cartoon because his name lent itself to a terrible pun. He's the one who gets to go on an exciting adventure with Spider-Man. Optimus Prime barely gets to share two pages with the costumed hero.

This virtual ignoring of the books lead character when it should have been the obvious thing to give have him and Spider-Man together is even odder in the context of the American comic. The initial 1984 line up of Autobots and Decpticons; the guys who got three pages to introduce themselves back in issue #2; is now regarded by fans as the “Classic” cast. The ones most likely to pop up in any quasi-G1 set medium. What we forget is that, in the early days, most of them never got a chance to do anything. Characters like Prowl and Wheeljack would do better in the dying days of the comic, but in these early years the quick influx of new toys means they'll be relegated to background appearances almost instantly. And they're the lucky ones, poor old Sunstreaker will go years between showings.

But the mini-bots are the really hard hit ones. With their toys being so much cheaper than the big boys there's less pressure to feature them in any prominent way and Bumblebee has effectively been elected the official representative for the whole lot of them. Most will show up as a group in their first issue and then never do anything of any note. The cartoon had it easier, even the shortest of the full seasons having more episodes than the US comic could do issues in a year. Meaning there was more space to do focus episodes on characters like Beachcomber, Powerglide and the aforementioned Gears. The UK originated stories will manage a little better as well (though generally it'll still have the mini-bots hanging out in groups and after Dinobot Hunt this will fade) but the only other one of their ilk who will ever get any sort of solo plot in the American series is Huffer when he gets to hang out with Bomber Bill. Yes, of the two non-Bumblebee mini-bots who get any attention it's the two with exactly the same personality. And lets face it, Bomber Bill was no Spider-Man. 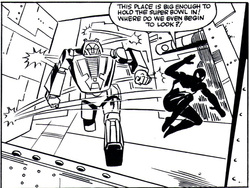 The great heroes of our age.
So what we have here is one of the most bizarre sights in comic history, Spider-Man and a third (fourth really) stringer Autobot breaking into the Decepticon base and rescuing Sparkplug. With Spider-Man humiliating Soundwave and Megatron in the process. At one point Gears compares Spider-Man to Bluestreak, and it's easy to imagine that whilst the back and forth debate over the web-slinger's involvement was going on that there was at least some thought put into having the unloved Datsun in this role. But for the sake of insane comic moments I'm glad things worked out this way.

But what's really nice about Spider-Man hogging the limelight is that it actually makes fitting the forthcoming first UK originated story into continuity surprisingly easy. As we'll see, the creative team of Man of Iron weren't especially bothered about the bigger picture and generally fans tend to find the official explanation of it taking place at some point during “The first 8 issues” somewhat unsatisfactory.

But what surprised me reading this issue in context is that, whilst it still takes a little massaging, it's not as hard as we often think to find a place for it here. The main leap of faith is that Gears, Spider-Man and company getting to the Decepticon base and back takes longer than it might seem at first glance, with the events of this second half of the issue taking two or three days. With the exact geographical relationship between the Ark and the base never being firmly established (to the best of my knowledge) and Sparkplug needing the time to develop a whole new fuel conversion process this isn't as unlikely as it might seem. And rather nicely - and who knows, possibly even deliberately - none of the Autobots who go with Spider-Man are in Man of Iron.

So if you go with the Ark having another shuttle than the one we'll find out the Dinobots used; and that it uses a power source the Autobots can't adapt for themselves; the whole Gears and Spider-Man jolly give Optimus and his boys time to go fly over to England and scare the crap out of a small boy. Surprisingly simple, and certainly requires less lube to fit than the next two UK stories will.

And that ladies and gentleman, is where my cool sophisticated exterior gives way to reveal the completely anally retentive geek within. And all without even mentioning that the Perchance to Dream Sunstreaker story happens around this point as well (as it features Jazz probably right after they get back from Blighty).

The dangerous world of the Knight Rider.
The rest of the issue includes confirmation in the editorial that this was the first appearance of the black Spider-Man costume in the UK, and a bit of Hasbro cross promotion where the new Knight Rider play-set is plugged. In which, weirdly, KITT is never referred to by name, either being just “Knight Rider” or “Knight 2000”. A copyright thing or a sign the person writing it didn't know very much? The real highlight of the issue is someone deciding to deal with Machine Man being such a tit by getting him blind drunk.

Rather nicely, we also get; discounting the school kids forced into it back in issue #1; our very first letter from a girl. Under the heading of “Am I mad?”. Which is a question most of fandom should probably be asking on a more regular basis.

Next week, Christmas in July as the first tinsel themed issue of the series hits. Though there's no special seasonal story this time I still want you all back here with Santa hats and Slade CD's at the ready. 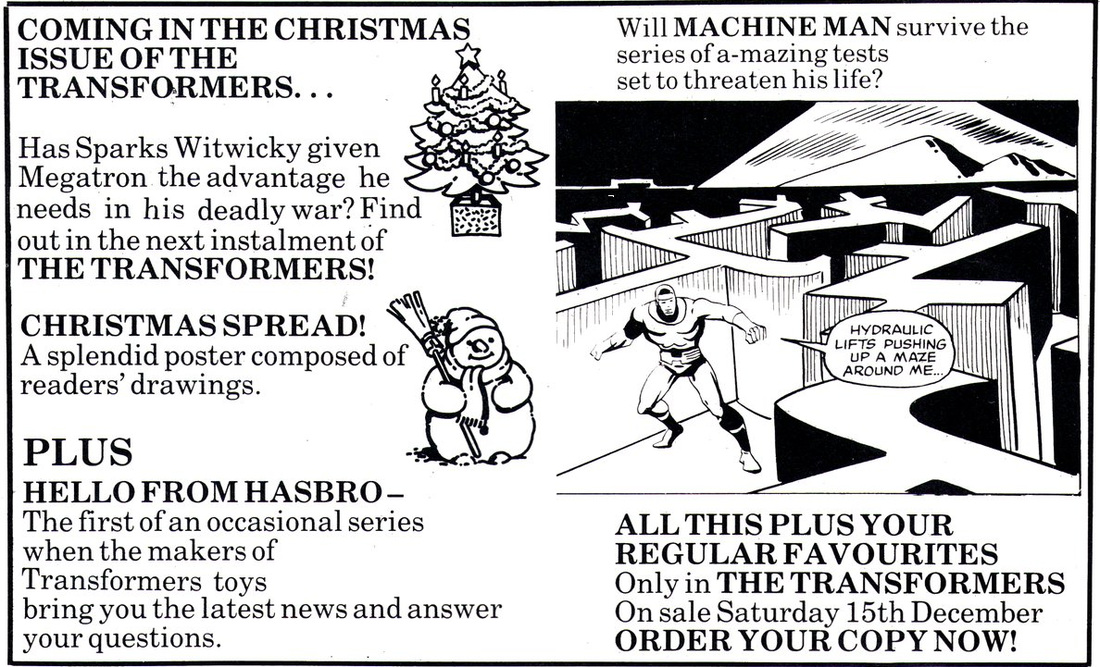